Part one of this series demonstrated how you can use Python to crawl for files in a directory, and then use the os library’s open() method to open the files and return their content as string data.

Now let’s jump into Part 2 of how to use Python to index files into Elasticsearch, specifically indexing all files in a directory.

Python 2 is now deprecated and losing support, and the code in this article has only been tested with Python 3, so it’s recommended that you use Python 3.4 or newer when executing this code. Use the following commands to check if Python 3, and its PIP package manager, are installed:

You can use the PIP3 package manager to install the elasticsearch low-level Python client with the following command:

You can use the following cURL request to check if the Elasticsearch cluster is running on yourlocalhost server: 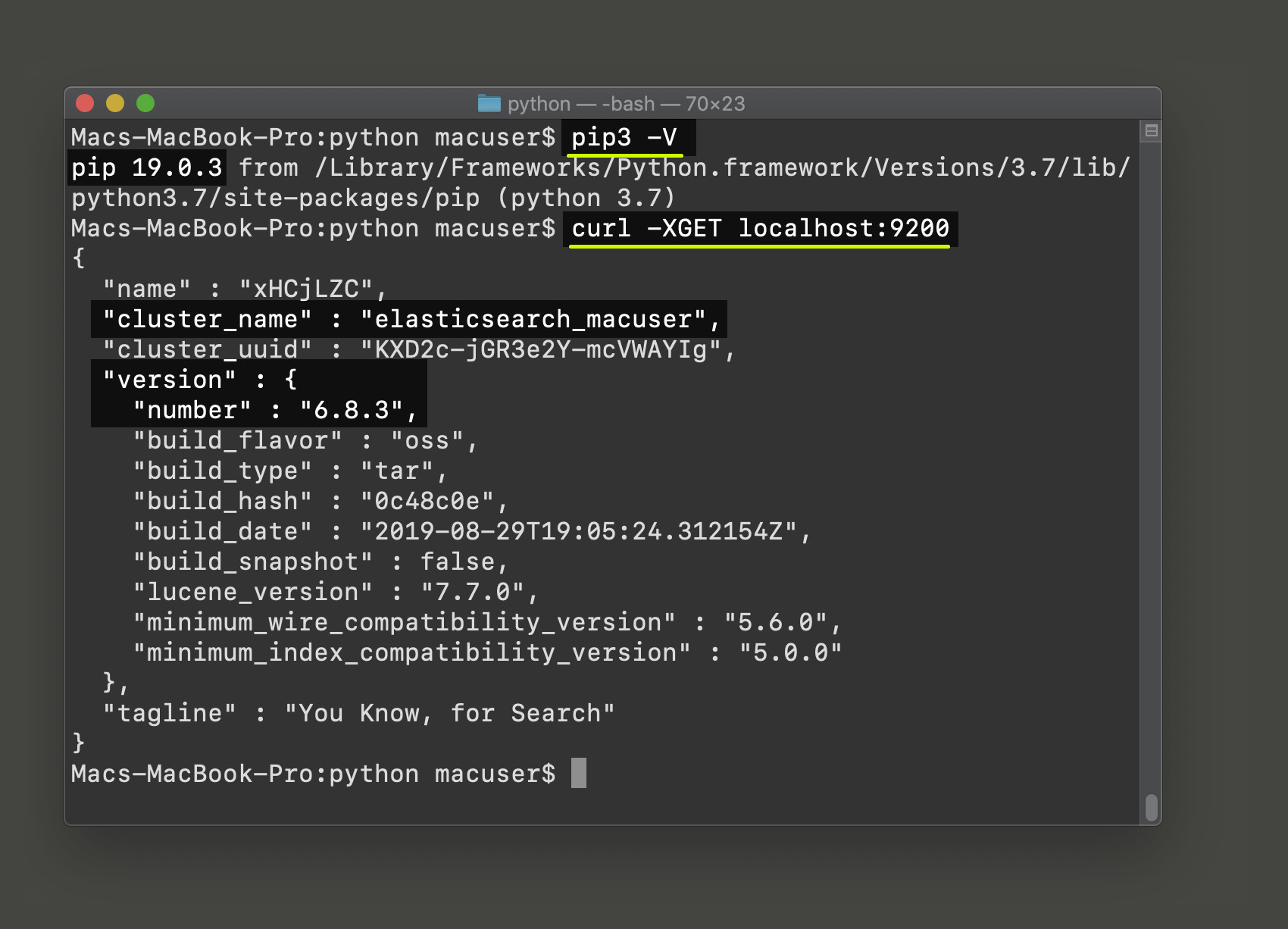 NOTE: The default port for Elasticsearch is 9200, but you can change this in your installation’s elasticsearch.yml file.

Make sure to import the helpers library for the Elasticsearch client. The following Python code demonstrates how to do this:

Iterate all of the file names returned by Python

The last article for this series demonstrated how to get all of the files in a directory (with a relative path to the Python script) using the following function:

NOTE: The default parameter for the function’s directory uses the current_path() function above to get the script’s current working directory if nothing is passed to it.

Here’s how you can pass a directory name to the function call to have it return all of the file names:

Define a function that yields Elasticsearch documents from the files

The following function will yield Elasticsearch documents when it’s passed to the Elasticsearch client’s helpers.bulk() method call. At the beginning of the function you need to use an iterator, like enumerate(), to iterate over the list of file names:

The code in this article uses the _id integer counter, returned by the enuerate() function iterator, for the documents’ IDs.

This next section of code inside of the function will parse the file’s data, within each iteration, to get the create and modify timestamps for the file using the os.stat() method call:

Get the file’s data for the Elasticsearch document _source data

The following code nests another function call (get_data_from_text_file()) to get each file iterations respective list of string data:

The join() function will put the list of strings together into one, longer string.

Here’s the code for the get_data_from_text_file() function from part 1 of this series:

If goes through the file, line-by-line, to get all of the string data and puts them in a list, and then returns the list object after the iteration is complete.

Python’s dict object type is a key-value data type that can map an Elasticsearch JSON document perfectly. Here’s some code that will take a file’s meta data and put it into a Python dictionary that can later be used for the Elasticsearch document’s _source field data:

Use a Python ‘yield’ generator to put the Elasticsearch document together

Here’s some code that passes the doc_source object to the "_source" field in a yield{} generator for each Elasticsearch document being indexed:

NOTE The _id field is optional, because Elasticsearch will dynamically create an alpha-numeric ID for the document if your code doesn’t explicitly provide one. The parameter for the _id field will register the ID as a string, regardless of whether an integer, float, or string is passed to it.

The last step is to pass the yield_docs() function defined above to the client’s helpers.bulk() API method call. The following code passes the client object instance and the entire function call to the bulk() method:

It should return a tuple response object if the API call was successful.

Caveat about indexing images to Elasticsearch

It’s not recommended that you attempt to index image files using the code in this article. Check out the article we wrote on uploading images to an Elasticsearch index for more information on how to do that.

Run the Python script using the python3 command. You should get a response that resembles the following:

Use Kibana to verify that the files were indexed using Python

If you have Kibana installed and running on your Elasticsearch cluster you can the Kibana Console UI (found in the Dev Tools section) to make the following HTTP request to verify that the files were uploaded and indexed to the cluster: 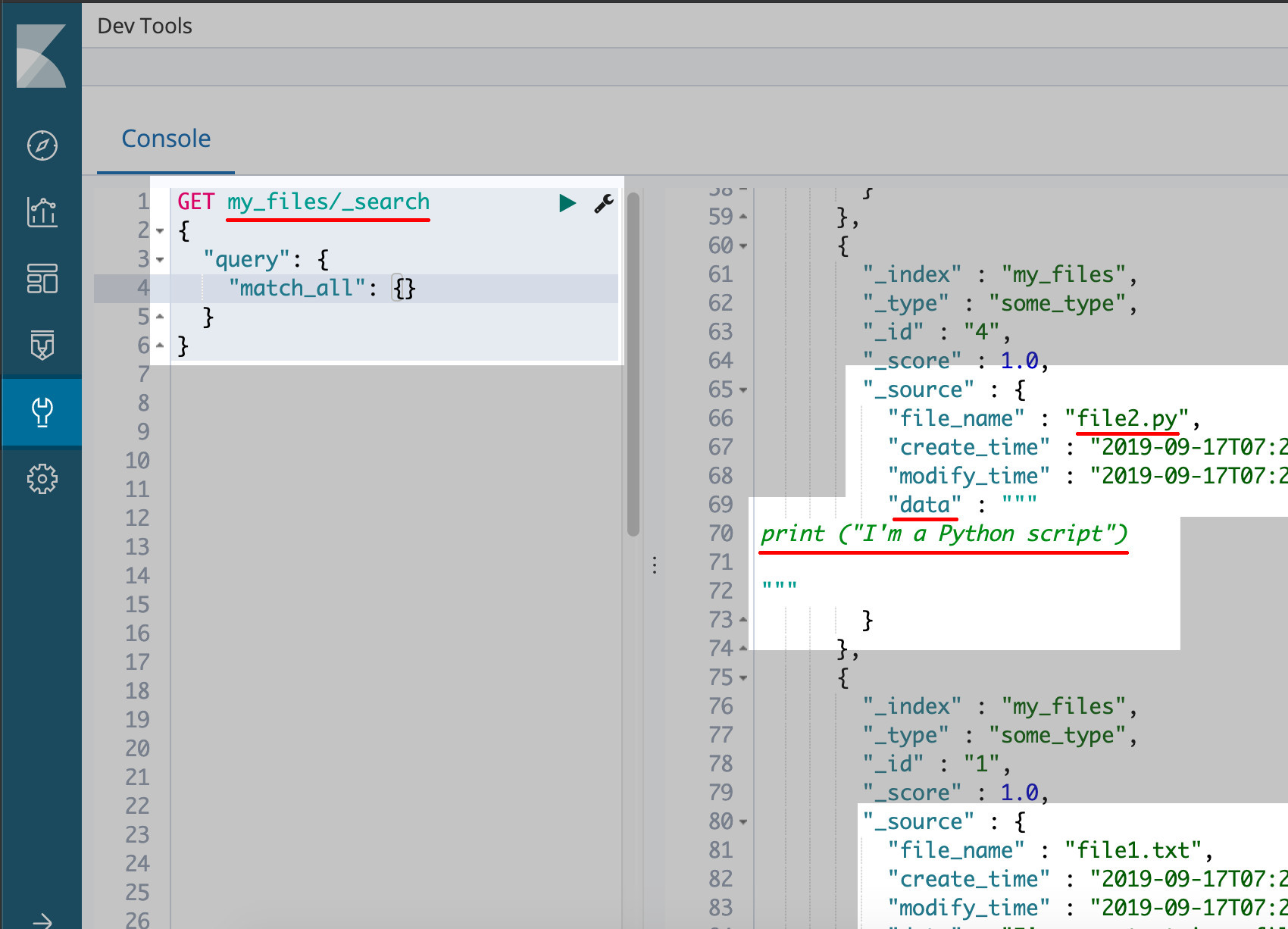 This concludes the series explaining how you can use Python’s built-in libraries to grep for files in a directory in order to index their data into Elasticsearch as document data. The complete code from both of the articles can be found below.