This article is part two of an article series that will show you how to build a Python web application designed to return Elasticsearch information. The first part of the series demonstrated how to create the web server using the Bottle framework. It also provided some example code that connected to Elasticsearch (using the Python low-level client) in order to return its cluster information.

This next part will show you how you can return all of the cluster’s indices (and their respective document data) to the front end of a website using the Bottle framework in Python.

Create an HTML file for the Elasticsearch document data

This article will use Python’s built-in codecs library to open the HTML file and retrieve its data for first part of the web page that will display the Elasticsearch document data.

Open a terminal window and use the code command for VB Code, subl for the Sublime editor, or a terminal-based text editor (like vim, nano, or gedit) to open or create an HTML file:

Put the meta and header tags into the HTML file

Put the following code into the file to begin the HTML for the tables for the Elasticsearch document data:

NOTE: The Bootstrap stylesheet link and the CSS within the <style> tag are optional, and just help to “prettify” the table data. The <meta charset="UTF-8"> meta tag is necessary if you’d like to display Elasticsearch data that includes Unicode characters outside of the 128-character ASCII range.

Create a Python script for the Elasticsearch web application

Create a Python script (e.g. elastic_app.py) that will query Elasticsearch documents, and run the Bottle server as well.

Import the Elasticsearch and Bottle libraries for Python

Like in part one of this series, you’ll first have to import the necessary Python libraries for the Python web server to return Elasticsearch documents:

In order to avoid an ImportError, you’ll have to make sure that you’ve installed the elasticsearch and bottle libraries, using the PIP package manager for Python, by executing the pip install (for Python 2.7), or pip3 install (for Python 3) commands in a terminal or command prompt window to install them.

Version 0.13 (and greater) of the Bottle framework no longer supports Python versions that are 2.6 or older, and it should be noted that the code in this article has only been tested on Python 3. Access the Bottle and Elasticsearch libraries’ __version__ attribute if you’re unsure which versions are installed. 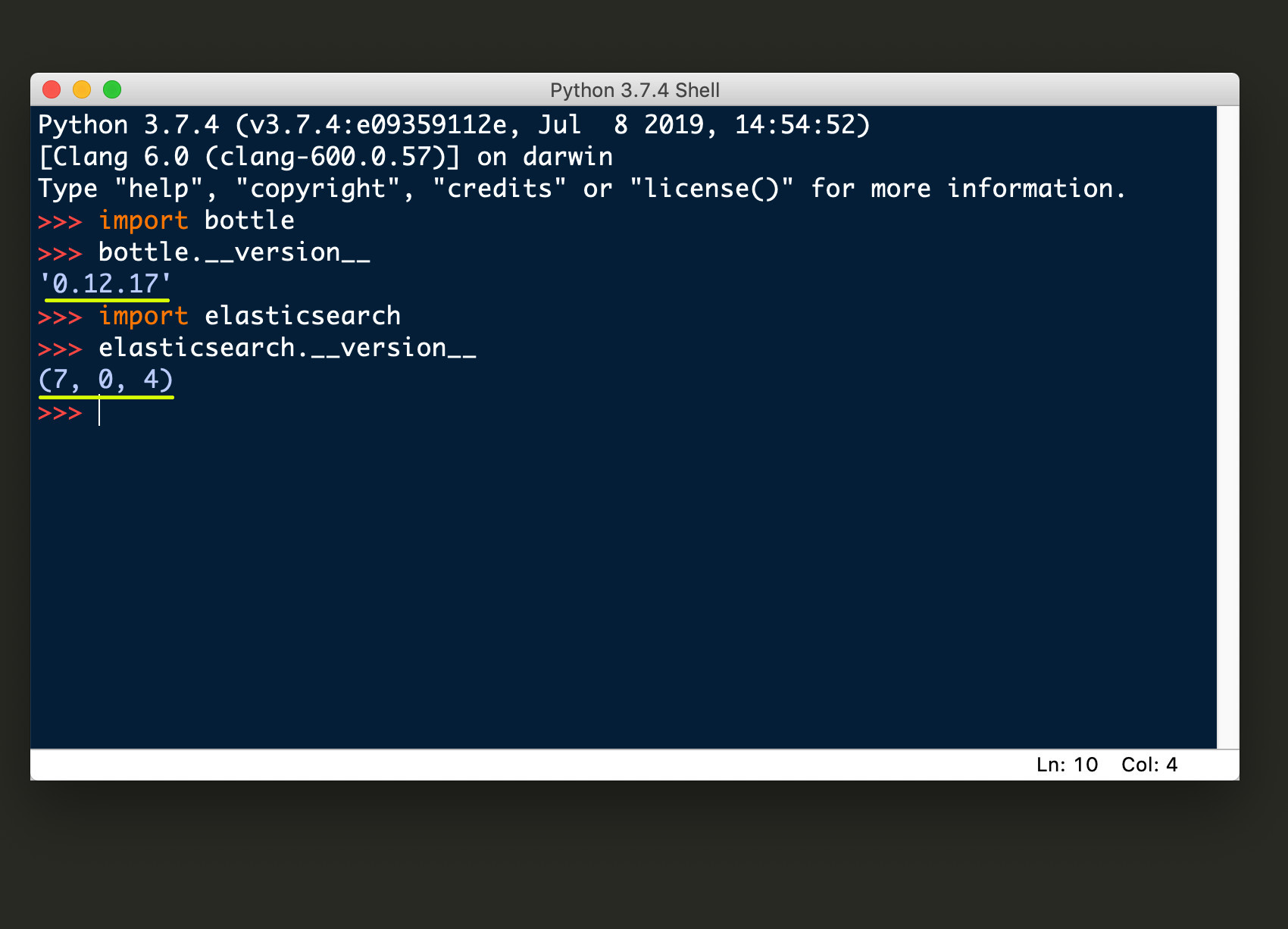 Create globals for the Elasticsearch and Bottle servers

The code in this article passes globals to the libraries’ method calls. The following code will set the Bottle server’s port to 1234, but you can set it to whatever you want:

Use the following code to attempt to connect to your server’s Elasticsearch cluster:

It will set the client library instance to None in the case of an exception, or if the cluster is not running.

Return Elasticsearch documents from every index stored on the cluster

The following code defines a Python function that will get all of the cluster’s indices, and their respective _mapping fields and document data, and it will return the data in a nested Python dictionary object called all_docs:

Get all of the Elasticsearch cluster’s index names

This part of the function will check if the client object instance is valid, and, if that’s the case, it will pass the * wildcard to the indices.get_alias() method call to get all of the index names in a list:

Iterate over the Elasticsearch index names

Now we can iterate over the index names using a for loop to get the _mapping schema fields and document data for all of the user-created indices that are not system indices (indices starting with a period, like .kibana):

Get the Elasticsearch documents for each index

Pass the index name object (ind) to the Elasticsearch client’s search() method to have it return some documents:

NOTE: Since indices may have thousands of documents, the above code will return only 10 documents (using the 'size' parameter) so that the server, user, and web page won’t be overwhelmed with documents. You can modify the code in this article to support pagination by passing an integer value to the from_ parameter, otherwise it will always only return the index’s first 10 documents.

Put the Elasticsearch documents into the Python dictionary

Access the ["hits"]["hits"] nested value to get the document data. The following code will take this document data and put it into another dictionary (nested inside of all_docs) under the "docs" key:

Get the Elasticsearch _mapping schema for the indices

The last step is to pass the index name to the client’s indices.get_mapping() method to have it return the nested mapping schema. Use the following code to have the function put this data into the dictionary under the "fields" key:

NOTE: As you can see from the above code, the "fields" and "doc_type" keys will just have an empty dictionary assigned to them in the case of an exception.

Now all we have to do is return the all_docs nested dictionary object after the iteration is complete:

This next function, called html_elasticsearch(), will parse all of the Elasticsearch data returned by the above get_elasticsearch_data() function and concatenate an HTML string in the form of a table.

The first step is to declare the function, and to use the codec library’s open() method to access the HTML file that we created earlier:

Call the get_elasticsearch_data() function to get the Elasticsearch data

Now pass the client object instance to the get_elasticsearch_data() function that we created earlier to get the cluster’s data:

Append the Elasticsearch data to the HTML string

Iterate over the each index and its document data and append <th> (table header) and <tr> (table row) elements to the HTML string, with each iteration, for the index’s name and fields:

Create a table row (<tr>) for each Elasticsearch document as well. The following code will iterate over the index’s documents and put each them inside of <tb> tags:

Return an HTML warning if the connection to Elasticsearch is invalid

The last step in this part of the process is to close the <table> tag, and append a warning message to the HTML string if no data was returned, or if the client object is invalid:

This last part of the function will return the HTML string along with closing tags for the <body> and <html> elements:

We can call then call the html_elasticsearch() function inside of the Bottle framework’s GET HTTP protocol function, and also pass the global parameters to the Bottle library’s run() method:

Conclusion to creating an Elasticsearch web application in Python

Run the web application using the python3 command followed by the script name:

You should see Python return something like the following in your terminal window: 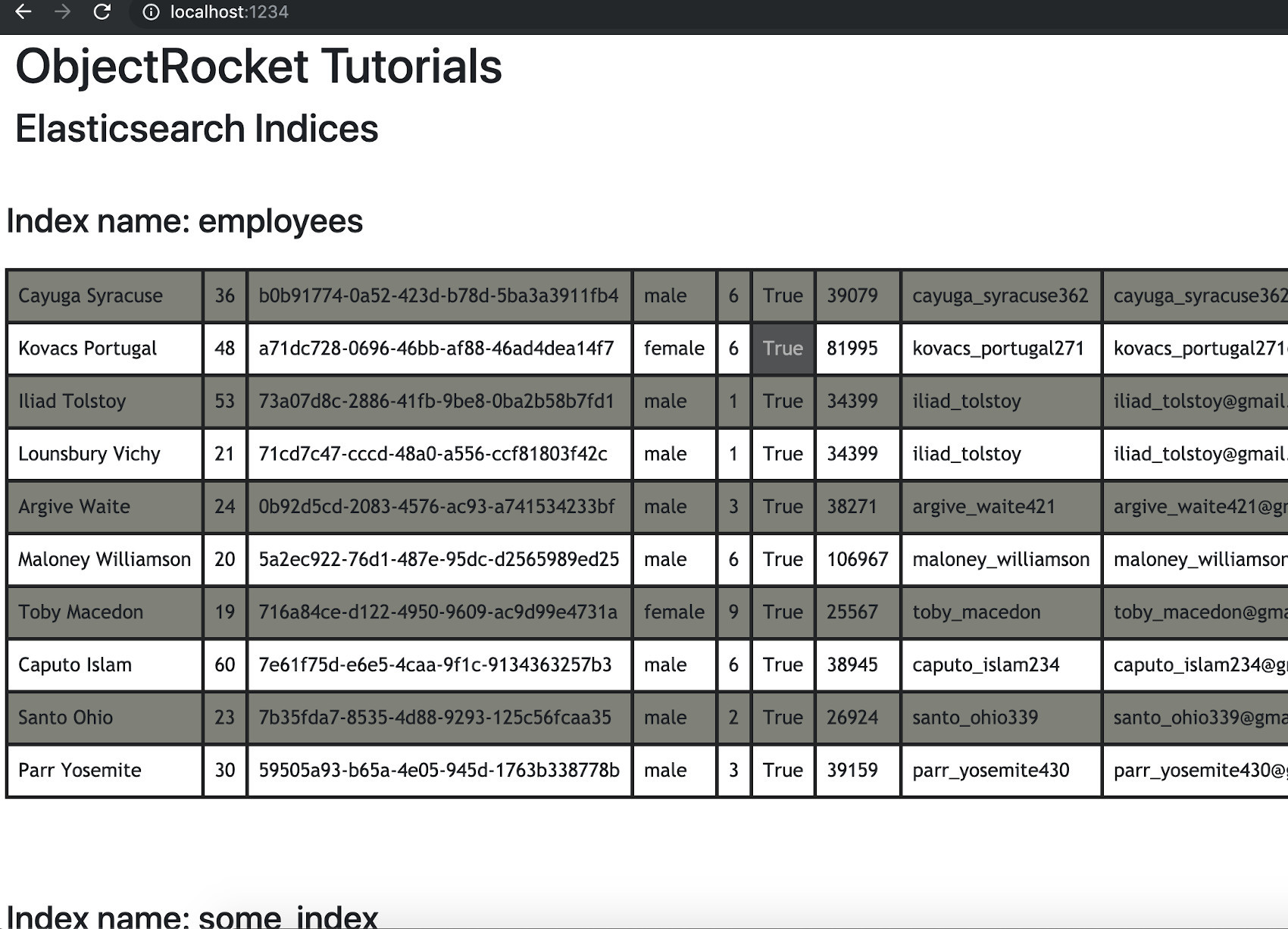 If Python returns an error saying: OSError: [Errno 48] Address already in use, then type lsof -ti tcp:1234 to search for the process using the open port. Once you get the PID (Process ID) for the process just use the kill -9 command (followed by the PID) to kill it before attempting to run the script again. This concludes the two-part series explaining how you can build a simple Elasticsearch web application in Python using the Bottle framework. Below you can find the complete Python code used in this article.