How to Upload Images to an Elasticsearch Index

Although Elasticsearch is known for its fast and powerful text search, it’s possible to index more than just text. For example, it’s easy to upload images to Elasticsearch. You can use Python’s PIL library to extract an image’s EXIF data, and then index the image’s data to an Elasticsearch index. In this article, we’ll provide step-by-step instructions for storing images with Python in Elasticsearch.

Prerequisites for indexing photos to Elasticsearch

Before we look at how to upload photos to Elasticsearch, let’s go over the key system requirements for the task:

Install all the Python libraries and dependencies using pip3

The Python code used in this article is tested and written with Python 3 in mind, since Python 2.7 is now deprecated. Therefore, we’ll be using the pip3 command for the PIP package manager for Python 3 to install the necessary libraries and modules.

Throughout this tutorial, we’ll be using the Python Imaging Library, also known as PIL or Pillow. We’ll be using Pillow with Python and Elasticsearch to index images. Let’s begin by installing PIL using the following command:

If you’d like to upgrade PIL to the latest version, use this command:

Install pybase64 for the Base64 Python encoding library

Next, we’ll install and upgrade the base64 encoding and decoding wrapper for the libbase64 Python library:

This library is necessary for converting documents to base64 in order to index them to an Elasticsearch index.

The image we’ll be using in this article is cute-kittens-in-basket.jpg from publicdomainpictures.net.

The actual image we’re using is a scaled down (1000×669) version of the original “cute-kittens” image: 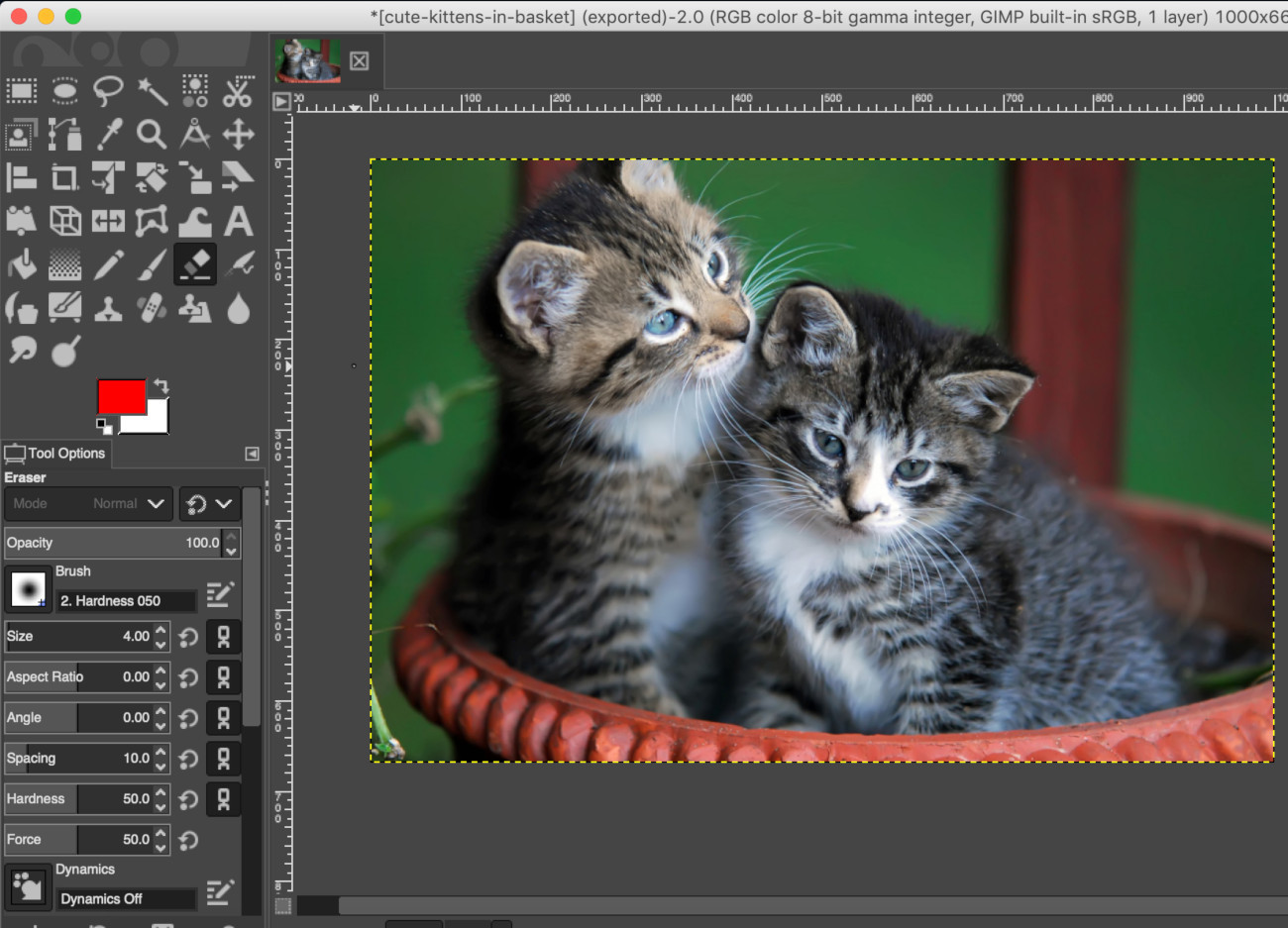 If you’d like to follow along with the instructions in this tutorial, use a public domain image like this one, or take a photo with your phone and put it into the same directory as your Python script.

After you create your directory, use the touch command to create a new Python script, or use nano to edit a new file and save it as a Python script:

>NOTE: Keep in mind that the names of Python scripts use underscores (_) instead of hyphens (-) (e.g. my_script.py).

Open a new Finder window (or whatever GUI-based folder application available on the OS where the Elasticsearch cluster is running), and move the image to the new project folder.

If you’re in a terminal window, this can be done using the mv command by specifying the target directory in the second parameter:

Next, we’ll need to import libraries and modules such as Elasticsearch and PIL into Python. Let’s edit the project’s Python script, making sure to import all of the following modules, classes, and libraries at the top:

After making these edits, save your script and run it in a terminal or command prompt window (using the python3 command) to make sure that all modules were properly installed using pip3.

If you get an ImportError, then return to the Prerequisites section of this article and make sure all of the libraries are installed and updated. Pillow (commonly known as PIL), elasticsearch, and pybase64 (or base64 for Python) are the only libraries we’ll be using in this article that don’t come packaged with a Python installation by default.

Create a new client instance of the Elasticsearch low-level client

Before we proceed, let’s make sure that the Elasticsearch cluster is up and running. Once you’ve confirmed this, we’ll add the following code to create a new client instance of Elasticsearch in the Python script:

You may want to use the Kibana Console UI to make HTTP requests and verify that an image has been indexed. If so, then you’ll need to make sure that Kibana is running.

The PIL library (Python Imaging Library) is instrumental in making it possible to index photos in Elasticsearch with Python. The PIL library has a TAGS class that allows one to read an image’s EXIF meta data. You can use this data to create custom fields for the Elasticsearch document’s _source data. This allows the document to be indexed, organized and searched using the image’s EXIF tags.

Set up the image document’s index data for Elasticsearch

If you have a specific _id or _index in mind for your selected image document, it’s best to declare that information before doing anything else. Let’s also declare a string containing the file name (and its path if the image is not in the same directory as the script):

Create a PIL Image instance of the image in the directory

Next, we’ll pass that _file string to PIL’s Image.open method as 'rb'. We’ll have it return a PIL Image object of the target image:

Make sure to import the TAGS class at the beginning of your script. This makes it possible to index an image EXIF with PIL:

We’ll need to create a function that first verifies the PIL Image object and then uses the _getexif() method to return all of the image’s EXIF data:

Now we can use the exif_data dictionary object for the Elasticsearch document’s _source data. Here’s the code we need to do it:

The function will place all of the EXIF data into a Python dict object and return that object to be indexed later on. For our sample image, the object’s key-value pairs would look like the following:

Create another function to generate missing EXIF data if needed

At this point, we’ll need to declare another function that will parse the EXIF dict data returned by the get_image_exif() function. This function will ensure that all of the documents in our Elasticsearch index have the same fields by generating EXIF data for them, even if some images don’t have any.

This function will parse through the EXIF keys using if and elif conditional statements to check if the EXIF data is present:

In our next step, we’ll be using the file string (_file) declared earlier. We’ll open the image using PIL’s Image class, and pass that Image object instance to NumPy’s asarray() method. Be sure to cast the NumPy array as a normal Python list object using the tolist() method; this ensures that the image’s pixel data can be put in lists and then stored in Elasticsearch:

Keep in mind that Elasticsearch only allows strings or encoded strings to be passed– not objects such as lists. We’ll need to convert the list to a string using the str() function:

Use Python’s Base64 library to encode images

You can also encode an image using Python’s Base64 library:

Put the raw image data into the _source object

At this point, we’re ready to put the raw image data into a field key of the _source object:

Create an Elasticsearch index and put the image data into it

The final step is to create an index in Elasticsearch if you have not done so already. Then, we can index the _source dictionary object with all of the EXIF and raw image data.

Create an Elasticsearch index and ignore any 400 HTTP errors

If the _index specified earlier already exists, be sure to use the ignore=400 option. This will instruct Elasticsearch to attempt to create an index, but also to ignore any HTTP 400 error codes so that the script will continue on without interruption:

Index the image dict object to the Elasticsearch index

In the previous step, we passed all the document data declared earlier to the Elasticsearch client’s index() method. Here, we have it return a response to confirm that the API call was successful and that there were no errors:

Getting the raise ConnectionTimeout(“TIMEOUT”, str(e), e) error while calling the Elasticsearch index() method

If you encounter a ConnectionTimeout error while indexing the image to Elasticsearch, simply use the request_timeout option while calling the index method:

The example shown above attempts to index the image data but will wait 60 seconds before it raises a timeout error. This can be useful for larger images that may take longer than expected to index.

If you’d like to verify that your image was indexed properly, you can use the Kibana Console UI. Simply navigate to port 5601 on your server’s domain (or to localhost:5601) in a web browser, and click on Dev Tools (represented by a small “wrench” icon in Kibana v7.x). Then, make the following GET request in the left console pane to verify that the image indexed properly:

You can also pass the document’s _id to an HTTP request directly using _doc as the document type (as specified in the index() method):

Once you click on the green arrow icon, the right pane of the Kibana Console will display information about the indexed image: We’ve looked at our example code one section at a time throughout this tutorial. The following code represents the complete script needed to index images in Elasticsearch: