Written by Data Pilot
August 26, 2019
Subscribe
Like
Have a Database Problem? Speak with an Expert for Free
Get Started >>

This tutorial will explain how to build an Elasticsearch GUI App with Kivy in Python. Kivy is a cross-platform, free, open-source Python library used to develop mobile GUI Apps and other software applications with Python programming language. Kivy is compatible with Apple, Android, Linux and Windows operating systems.

Prerequisites to build an Elasticsearch GUI App with Kivy in Python.

How to verify the Elasticsearch document using Kibana

Make the following GET request in Kibana, or with cURL, to verify there are documents in the Elasticsearch index that can be used to test the Kivy GUI application:

The results should resemble the following. 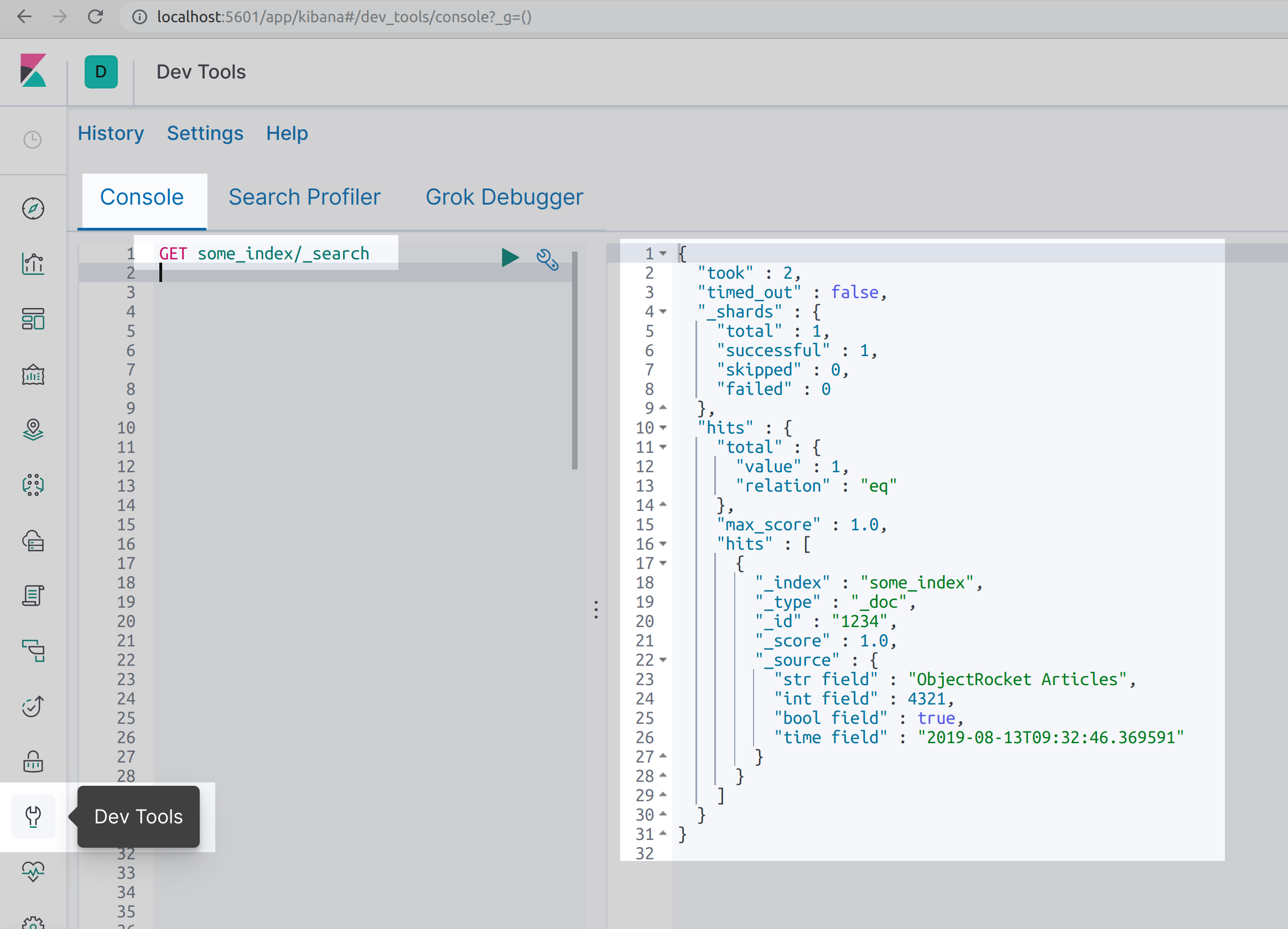 To use the cURL library, instead Kibana, execute the following HTTP request in a command prompt or UNIX terminal window to retrive all of the documents in an index:

How to Declare a Class for the Kivy Application

This example application employs Kivy’s FloatLayout class to specify the relative location of each widget. Execute the following script to declare the inner application class for the Kivy App:

NOTE: There are several other layouts for Kivy, such as BoxLayout, RelativeLayout and PageLayout.

The float layout for the Kivy widgets uses the pos_hint dictionary attribute to specify a location for the widget relative to application window. The dictionary keys are y and y and take floats for their respective values.

The following dictionary example will position the widget directly in the middle of the App:

Unlike the pos_hint attribute, the size_hint attribute must use a list [] or tuple () object for its value that must contain two floats that represent the relative size of app widget.

The application class’s add_widget() method will insert widgets into the GUI application after the widgets have been instantiated.

The following script creates a widget for the Label() object at the top of the application:

The followinhg script executes the TextInput() object instance containing the text value for the Elasticsearch index name that is input by the user:

The following script creates the button widget the user will press after the query parameters have been passed by the user:

The user must input the index’s field that will be queried into the TextInput() widget. Note that this operation requires less than half of the application’s width, leaving room for the query field next to it.

How to declare a TextInput widget for the query match

The query example used for this Kivy App uses a simple "query": "match" JSON query. This means the user text in this field will only return documents that perfectly match the field’s value.

Execute the following script to declare a TextInput widget for the query match:

The following script will create a label used to display the JSON results of the Elasticsearch query, including errors, or state if the query did not return any documents:

This nested method inside of the Kivy application class contains the filter-dictionary object for the query. Make sure to pass the text attributes from the field_input and query_input attributes to the filter’s "match" field.

Execute the following code to determine if the user has typed an index name into the application:

Note that the JSON response displayed by the application will produce an error warning if no indexed name is returned,

Call the make_query() global function, declared in part one of this tutorial series, if there is an index name in the field. Execute the following command, making sure to pass the filter dictionary object and the index name to the function call:

Use Python’s built-in JSON library’s dumps() method to have it return an indented JSON string of the Elasticsearch cluster response to the API call.

How to Declare the Main Class for the Elasticsearch Kivy Application

Execute the following script to declare the Kivy class that will build and run the application:

If there are no build errors, the App should immediately open and display the Kivy widgets, declared in the class above, as elements in the GUI application. A screenshot follows: 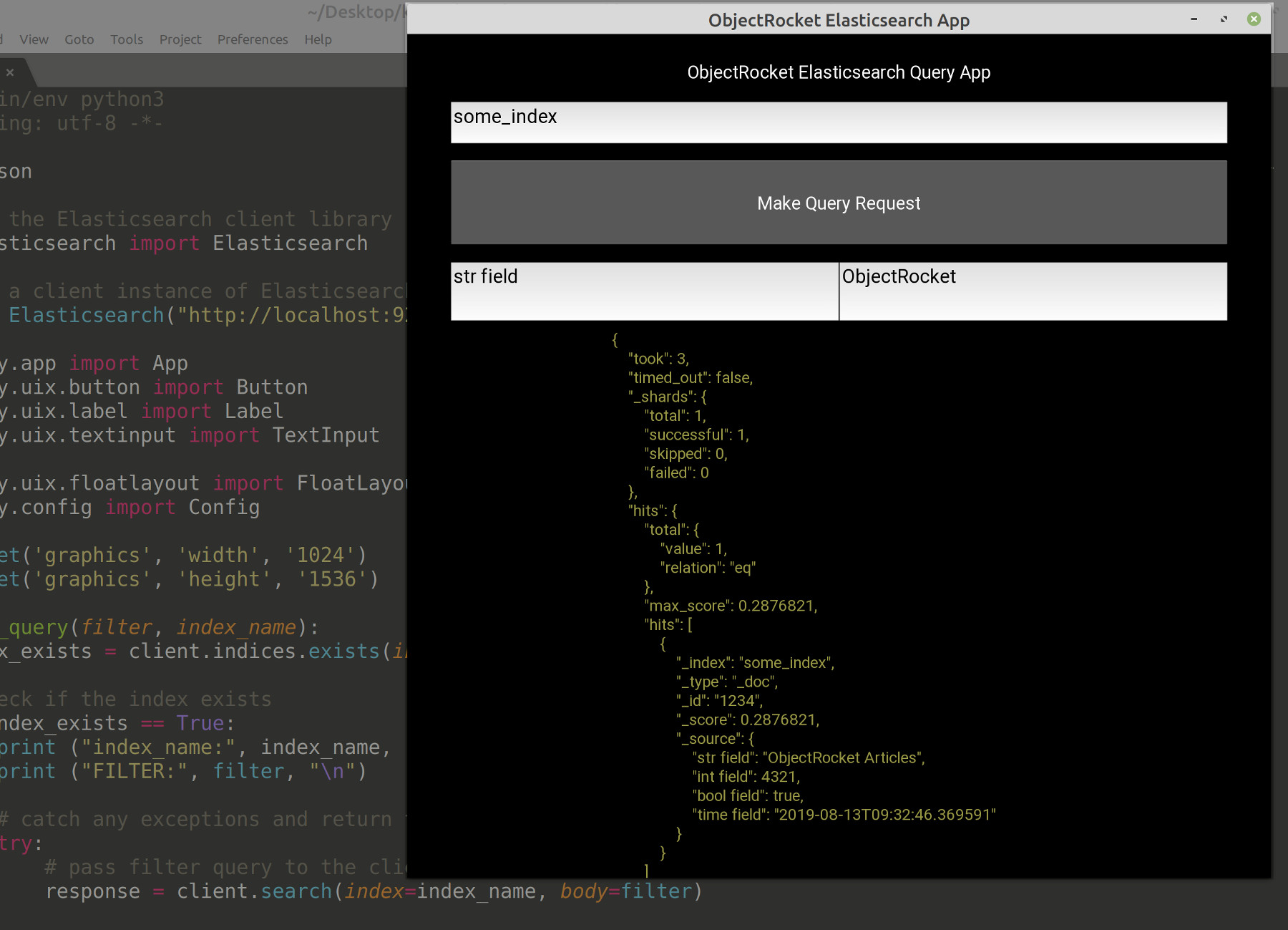 Now test the query API by typing an index and field name, as well as the query string, in their respective fields as shown here:

The JSON response returned by Elasticsearch, displayed in the Kivy App, will vary depending on the cluster’s index name, the document data in the index and the query call executed by the user.

This article is part two in the tutorial series explaining how to build an Elasticsearch GUI App with Kivy in Python. The tutorial specifically covered how to build a basic Kivy App that will make a simple "match" query request to an Elasticsearch cluster. The article explained how to declare the main class for the Elasticsearch Kivy class that will build and run the application, how to create Kivy widget labels and buttons, use the Kivy widget’s ‘pos_hint’ attribute to set the element’s relative location and how to use the ‘size_hint’ attribute to sets the relative size for the Kivy widget. Part two also covered how to use Kivy’s add_widget( ) method, how to create a Kivy label widget for the Elasticsearch app title and how to declare a Kivy button to initiate the search API query to Elasticsearch. Remember that if the app does not immediately open and display the Kivy widgets, there was an error somewhere in the build process.

Here is all of the Python code, from parts one and two, for the Elasticsearch query Kivy application: