Use Python To Query Elasticsearch In A Terminal Window

Let’s review a few prerequisites that need to be taken care of before we jump into the Python code:

You can use the pip3 show elasticsearch command to get additional information on the Elasticsearch library for Python. 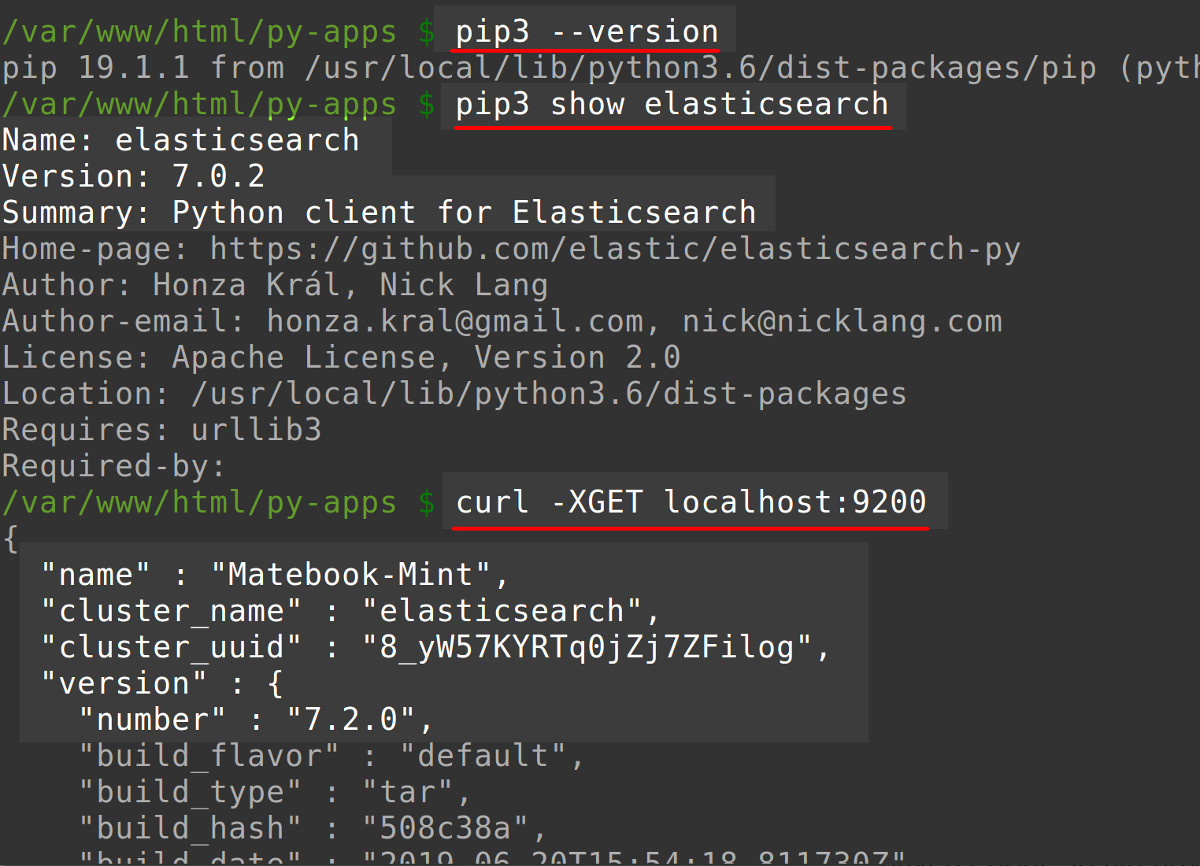 Create a Python script that will make requests to Elasticsearch

Once all the prerequisites are in place, we can start working on our Python script. In a terminal window, navigate to your Elasticsearch project folder or somewhere on the main node or server that runs the cluster, and create a new Python script that will be used to make Elasticsearch requests. Our script will be named query.py:

Import the packages needed to make requests to the Elasticsearch cluster

You can write your script in an IDE that supports Python syntax, or you can use a terminal-based editor like nano, gedit, or vim. The first code we’ll add to our script is used to import all the packages we’ll need:

The native sys and json Python packages, as well as Elastic’s elasticsearch library, will be used in our script to query Elasticsearch.

Instantiate an Elasticsearch client in the Python script

Next, let’s have the Elasticsearch class return a client instance. When you do this, don’t forget to pass the appropriate domain name and port in the URL string. You can leave the string empty if your cluster is on the default localhost:9200:

When we call our Python script, we’ll have to pass some arguments to it so that Elasticsearch will know what to query and what index to query. Each argument should be delimited by a space.

In this example, after the name of the script itself, we’ll pass the name of the Elasticsearch index that we want to query. Later in the script, you’ll see that we also pass two additional arguments that represent the field name and the query itself:

In the function shown below, we check to make sure the specified index exists at the beginning because the query won’t work if the index doesn’t exist. This function needs to have a filter Python dictionary passed to it as a parameter:

Next, we’ll call the Elasticsearch client’s search() method in a try-except exception block. We’ll make sure to pass the INDEX_NAME variable to it as the index parameter along with the filter query dictionary object as the body parameter:

The function will iterate over the response object that’s returned by the Elasticsearch cluster, and it will print the document "hits" that match the query:

The next step is to declare a main() function, which the Python interpreter will call when running the script. We’ll get the sys.argv list of arguments that get passed to it in the terminal, then we’ll pass the first item in that list to the pop() function. We do this to remove the Python script name, which is always the first argument in the list, because we won’t be needing it:

Make sure that there are exactly three arguments passed

In order for our Elasticsearch query to work, there needs to be exactly three arguments when calling the Python script’s main() function:

Pass a filter dict to the make_query()

If we verify that there were three system arguments passed to the script via the terminal command, then we proceed to create a new filter Python dictionary object from the argument values:

Then, we pass the filter dict to the make_query() function that was declared earlier outside of the main() function:

The final step in creating our script is to instruct the Python interpreter to call the main() module:

Now that our script is complete, all we need to do is run it. To do this, open a terminal window and use the python3 command to run the Python script, passing three arguments delimited by spaces—- the Elasticsearch index name, the field being queried and the partial match query string. Make sure to enclose the query in quotation marks if any of these arguments is made up of more than one word.

Assuming that there are no errors and there are matching documents in Elasticsearch, the output should look something like this: 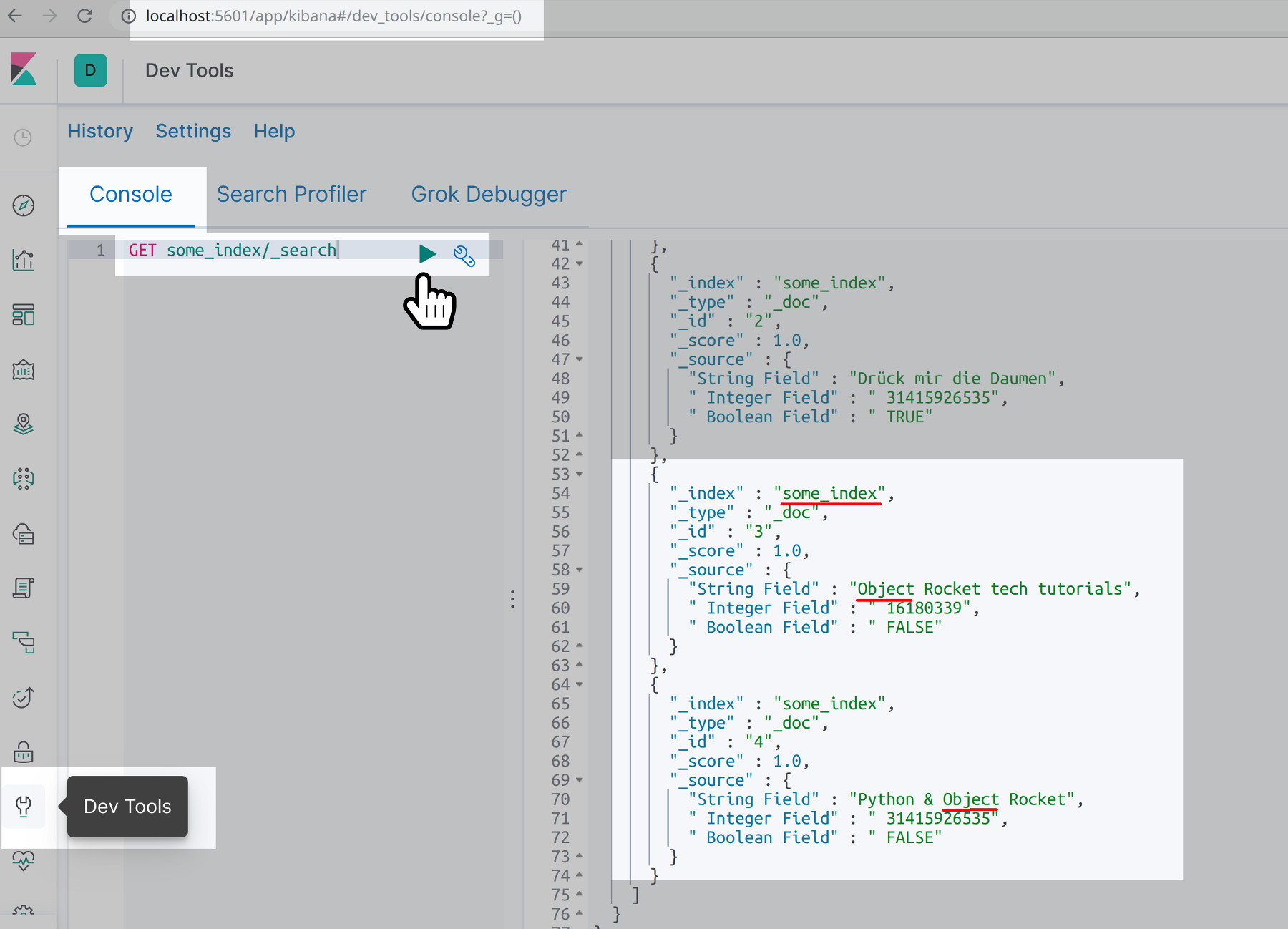 Notice that the search query is not case-sensitive, nor is it an exact match, because a query of just “object” returned the two documents shown in the screenshot.

We’ve looked at quite a bit of Python code throughout this tutorial. Shown below is the example script in its entirety: