How to Use The Websocket Output Plugin For Elasticsearch

Written by Data Pilot
May 29, 2019
Subscribe
Like
Have a Database Problem? Speak with an Expert for Free
Get Started >>

Prerequisites for the Websocket Plugin

Before we can set up the Websocket plugin, we need to make sure we’ve covered all of the system requirements for this task. There are some important prerequisites to keep in mind:

Install Logstash for the Elasticsearch cluster

The next step will be to install Logstash for the Elasticsearch cluster. If you already have Logstash installed, you can skip this section.

If you’re planning to use Homebrew to install Logstash, it’s best to update the package manager first. You can do this and then install Logstash for Elasticsearch with the following commands in a macOS terminal:

Next, start the service using Homebrew:

You’ll see that the Logstash directory path for the Homebrew installation is in the Cellar directory:

Another way to install Logstash is by downloading it straight from the source. Use the wget command to download the package, or you can simply download it from Elastic’s site. To download Logstash 7.1 with wget, use the following command in a Linux terminal:

Once you’ve downloaded Logstash, use the unzip command to extract the Logstash directory from the archive:

Then install the Logstash package with apt-get:

For RPM-based distributions, use the yum command:

If you do a YUM installation, the configuration file should be found in the /etc/yum.repos.d/ directory.

Once everything is installed correctly, it’s time to run Logstash. On a systemd distribution of Linux, you can use the systemctl command:

Running Logstash on a SysV distro of Linux

For SysV distributions, the following command is used instead:

Verify that the Logstash service is running

If you’ve confirmed that Logstash is successfully installed, you can use this command to have the Logstash service install the Websocket plugin:

Note: The Logstash service doesn’t need to be running in order for the logstash-plugin install command to work. 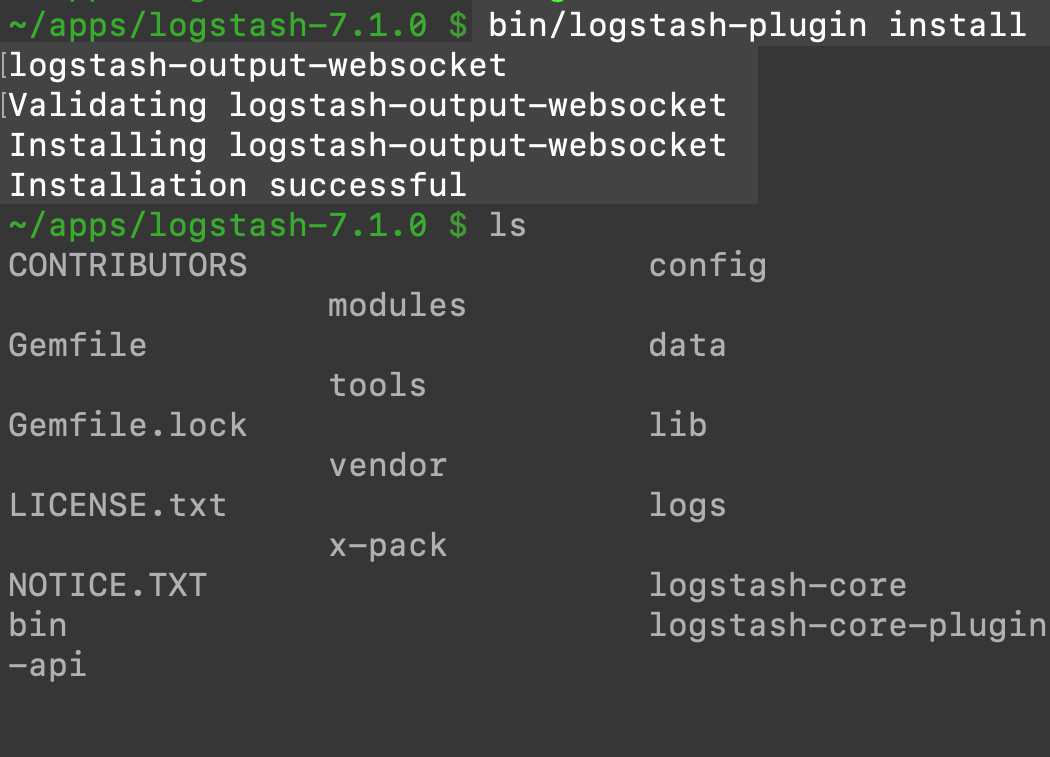 Configure Logstash to use the Websocket plugin

If you’re running Logstash in the foreground from a terminal window, simply press CTRL+C to stop the service.

Create a configuration file for the Websocket pipeline

The next step in the process is to create or edit a configuration file for the Websocket plugin. You can edit the file using nano:

NOTE: If you’re running Logstash from an unzipped source directory, you’ll need to create or move the .conf file to the logstash/config directory.

Configure the Websocket options in the Logstash configuration file

There are several options to pass within the nested websocket JSON field in the configuration file. Let’s look at some commonly-used options:

The codec option allows you to use different encoding schemas for the websocket. The default value is plain.

The id option allows you to pass in a string to be used as the websocket’s plugin ID. If you omit this option, Elasticsearch will automatically generate an ID for the plugin.

The host option is a string representation of the host domain name or IP address for the websocket, while the port option is an integer expressed without quotation marks ("). The default values for these options are:

If you get an error stating Logstash could not be started because there is already another instance, or if the port is in use by a running process, try using lsof to locate the process. Then, you can use sudo kill -9 to kill the process using its PID, as shown in the following example:

Be sure the path to the configuration file, as specified in the bin/logstash command, is correct.

Using a websocket can help you maintain a persistent communication between Logstash and Elasticsearch. Data can flow into Elasticsearch from Logstash through a websocket– all you need is the Websocket output plugin for Elasticsearch to make it happen. With the instructions provided in this tutorial, you’ll be ready to install the plugin, make the configuration changes, and get started with an output websocket.