How To Use The Search API For The Python Elasticsearch Client

Written by Data Pilot
May 20, 2019
Subscribe
Like
Have a Database Problem? Speak with an Expert for Free
Get Started >>

Elasticsearch is widely known for its fast, efficient full-text search queries. While these queries can be executed from the command line using cURL, there are a number of clients available that allow you to work with Elasticsearch from many popular programming languages. In this article, we’ll focus on the Elasticsearch Search API for Python and provide examples of different Elasticsearch Python queries.

Before we can begin looking at some Python code, it’s important to review the system requirements for this tutorial. The following prerequisites are necessary in order to query Elasticsearch documents in Python:

In response, you’ll receive a tuple object containing three numbers. The first number will represent the major version of the library.

Set up the Python script for the Elasticsearch client

Now that we’ve covered all the system requirements, it’s time to turn our attention to the code. The first step is to create a new Python script that will be used to make calls to the Elasticsearch client. This can be done using the touch command in a terminal window, followed by the file name. Be sure that the file name uses the .py file extension (e.g. "touch my_python_script.py").

NOTE: When you’ve finished editing a nano script, simply press CTRL+O to save your changes, and then CTRL+X to close the editor.

First, import the Elasticsearch client library for Python, and you may also include the optional shebang and encoding lines at the top of the script:

Next, we’ll create a new client instance using that library we just imported:

We’ll need to create a Python dictionary that will be passed to the client’s search() method. This dictionary will contain key-value pairs that represent the search parameters, the fields to be searched and the values.

The dictionary will be passed to the body parameter of the method. The first key should be the Elasticsearch "query" field.

Elasticsearch _search query in the form of a Python dictionary

It’s easier to understand the structure of a Python dictionary when you can see it used in an example. Here’s what a basic search query would look like in a Python script:

Python dictionaries map closely to JSON objects, so the Kibana version of the query shown above would look almost identical, except you would replace the query_body declaration with GET some_index/_search.

Instantiate the Python dictionary while calling the Search() method

You can pass the dictionary data for the query directly to the search method at the time of the call.

The only two required parameters for the Search API in Python are the index you want to search, and the body of the Elasticsearch query:

In our next example, we’ll create a query to get all the documents in a particular index. We’ll use the Elasticsearch "match_all" option in the Python dictionary query to accomplish this.

The example below has the query passed into the method call directly. It returns a result object containing all of the documents returned by the API call:

The indented example shown above is clearly more readable, but it’s possible to execute the same call with just one line of code:

The Kibana Console equivalent of this same query is shown below:

In many real-world applications, there would likely be an HTTP POST of the query parameters to the Python script. Those parameters would then be passed to the body parameter of the method, which is used to perform an Elasticsearch search in Python.

Let’s see how an HTTP response could be processed and passed to the method. In the following example, we pass a string to the dictionary:

Any documents returned by the query shown above must have both of the values that were passed into the list. The "hits" for the search query are returned by the API and put into the result variable.

Here’s what the same _search request would look like when executed in Kibana:

When you call the search() method, it returns a list of Elasticsearch document "hits". Each hit is comprised of its own respective dictionary which contains all the document’s fields and values.

What this means is that the results take the form of a nested dictionary– a dictionary made up of dictionaries. To access a key’s value, use ["hits"]["hits"] as seen in the following example:

Have the Python Search() method return more than just 10 “hits”

By default, Elasticsearch search queries will return only 10 hits, even if more matches are found. If you’d like to have the Python client return more, you can pass the optional size parameter when calling the search() method:

NOTE: Python’s len() function can be used to have Python return the number of "hits" from the API call. 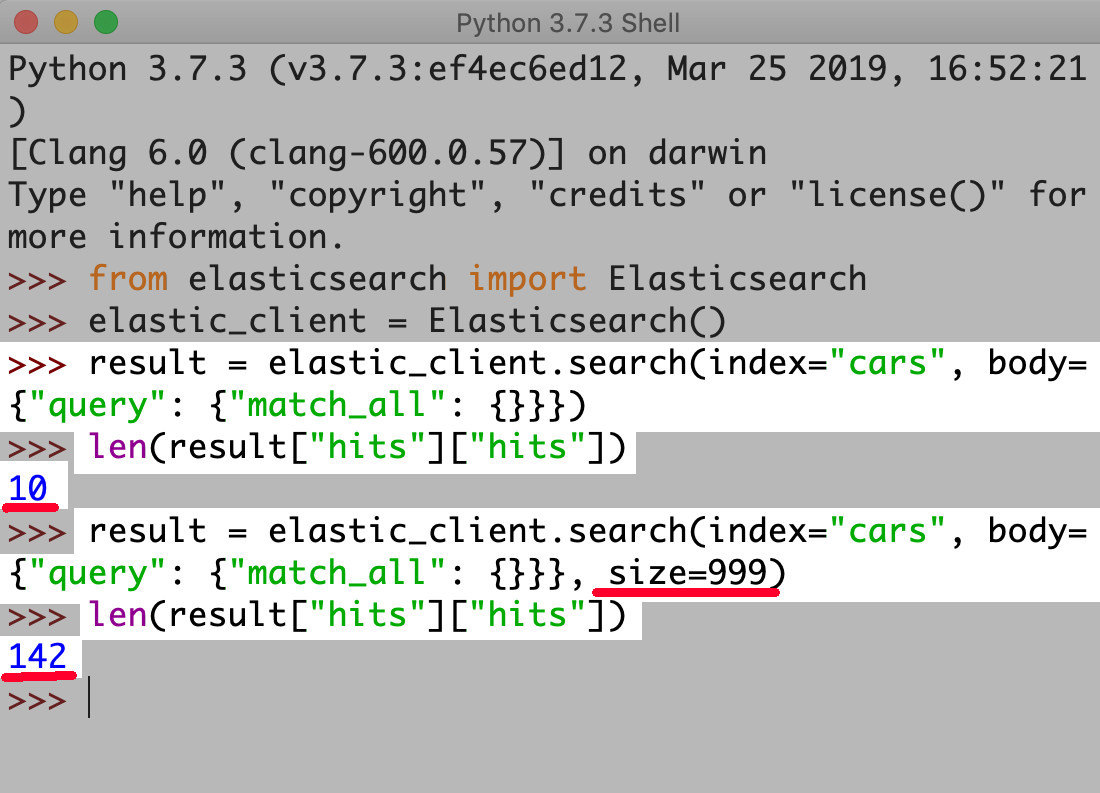 After you make the call, you can take the result object and get the list of documents inside its ["hits"]["hits"] dictionary attribute:

Now we can take that all_hits list and iterate through it. In Python 3, the enumerate() function is a more efficient way to iterate through a list than the traditional for loop:

By doing this, you can then access all of the attributes for each document’s dictionary using the Python built-in items() method for dictionaries (if you’re using Python 2.x, use the iteritems() method instead). 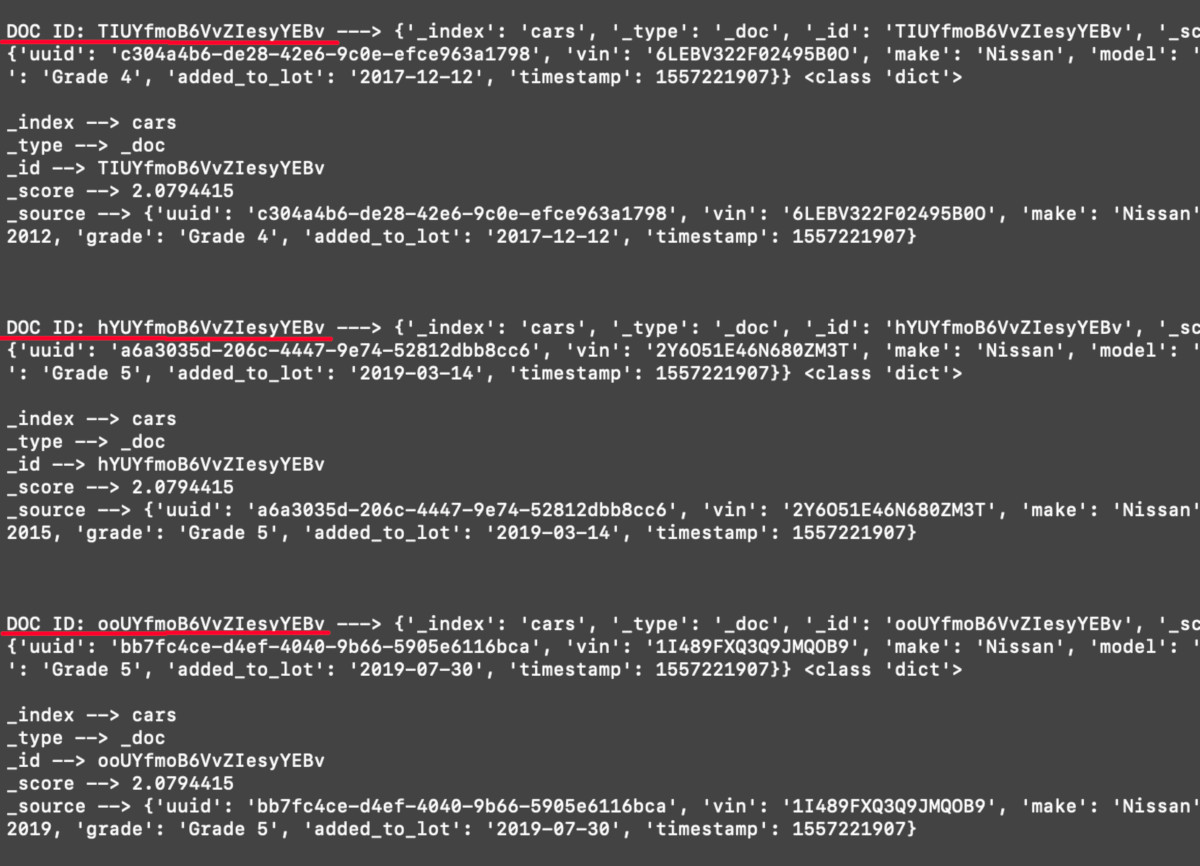 When you’re using Elasticsearch to store and search your data, it’s important to know how to use the service’s fast, efficient query functionality. The Elasticsearch Python client makes it easy to construct the queries you need from a Python script and process the returned results. With the instructions provided in this article, you’ll have no trouble querying Elasticsearch documents in Python using the Search API.

In this article, we reviewed the example code one segment at a time. Here’s what the complete Python script looks like: