Written by Data Pilot
May 15, 2019
Subscribe
Like
Have a Database Problem? Speak with an Expert for Free
Get Started >>

If you’ve been working with Elasticsearch, you may have issued a few cURL requests to communicate with the service and get information about your cluster. For example, a simple GET request using cURL will return data on an Elasticsearch cluster’s health:

Before we look at any Python code, it’s important to ensure certain system requirements are met. For this task, there are only a couple of prerequisites:

In Python, virtually everything is an “object”, including variables and strings. This means that they all have classes, attributes and methods. Knowing this, we can use the dir() function to return all the attributes for the Elasticsearch client’s Cluster class in a Python list.

To do this, open a Python interpreter like IDLE, and use the following code to get all the attributes the Elasticsearch client’s Cluster:

Using dir() to return a list of the Elasticsearch cluster’s attributes: 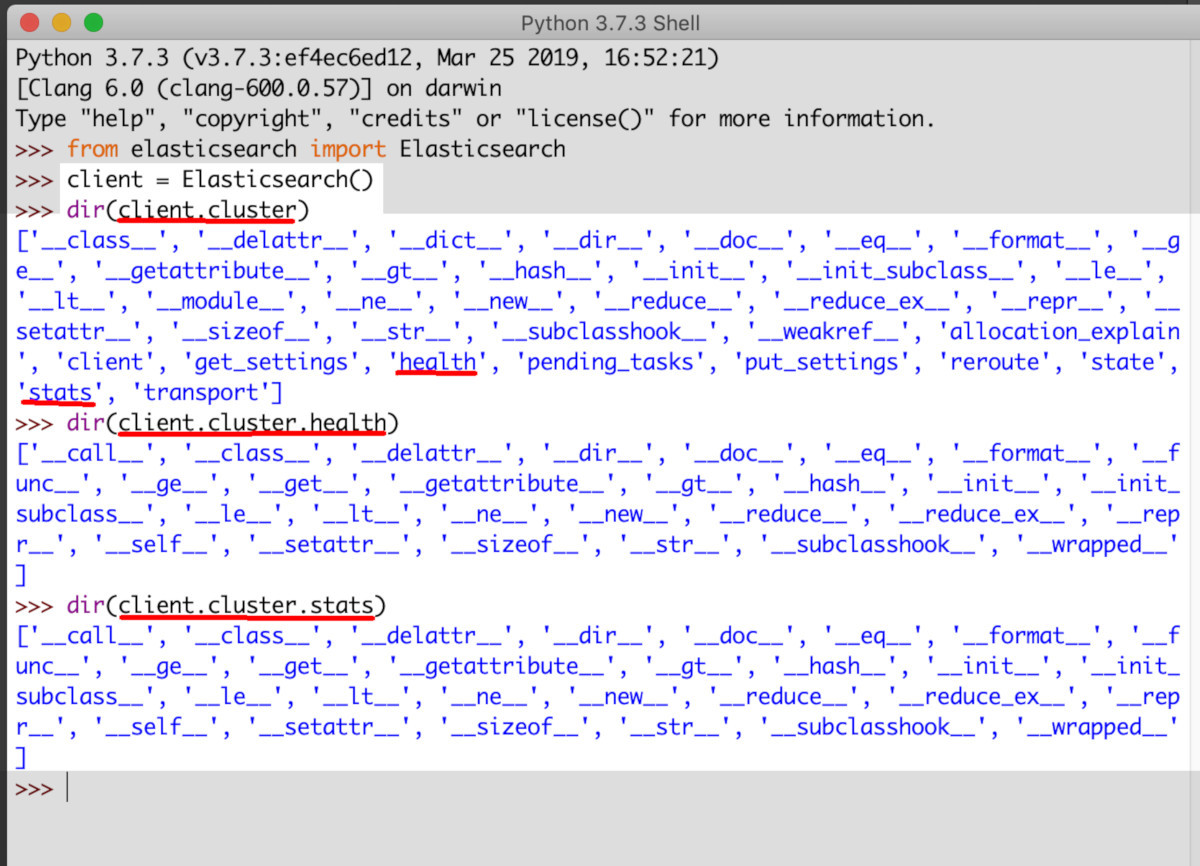 Import Elasticsearch in a Python script and access the Cluster class

Next, we’ll create a new Python script (using the file extension: .py) and import the Elasticsearch low-level client at the beginning of the script:

Python printing out information about the Elasticsearch client’s cluster.health() and cluster.stats() methods: 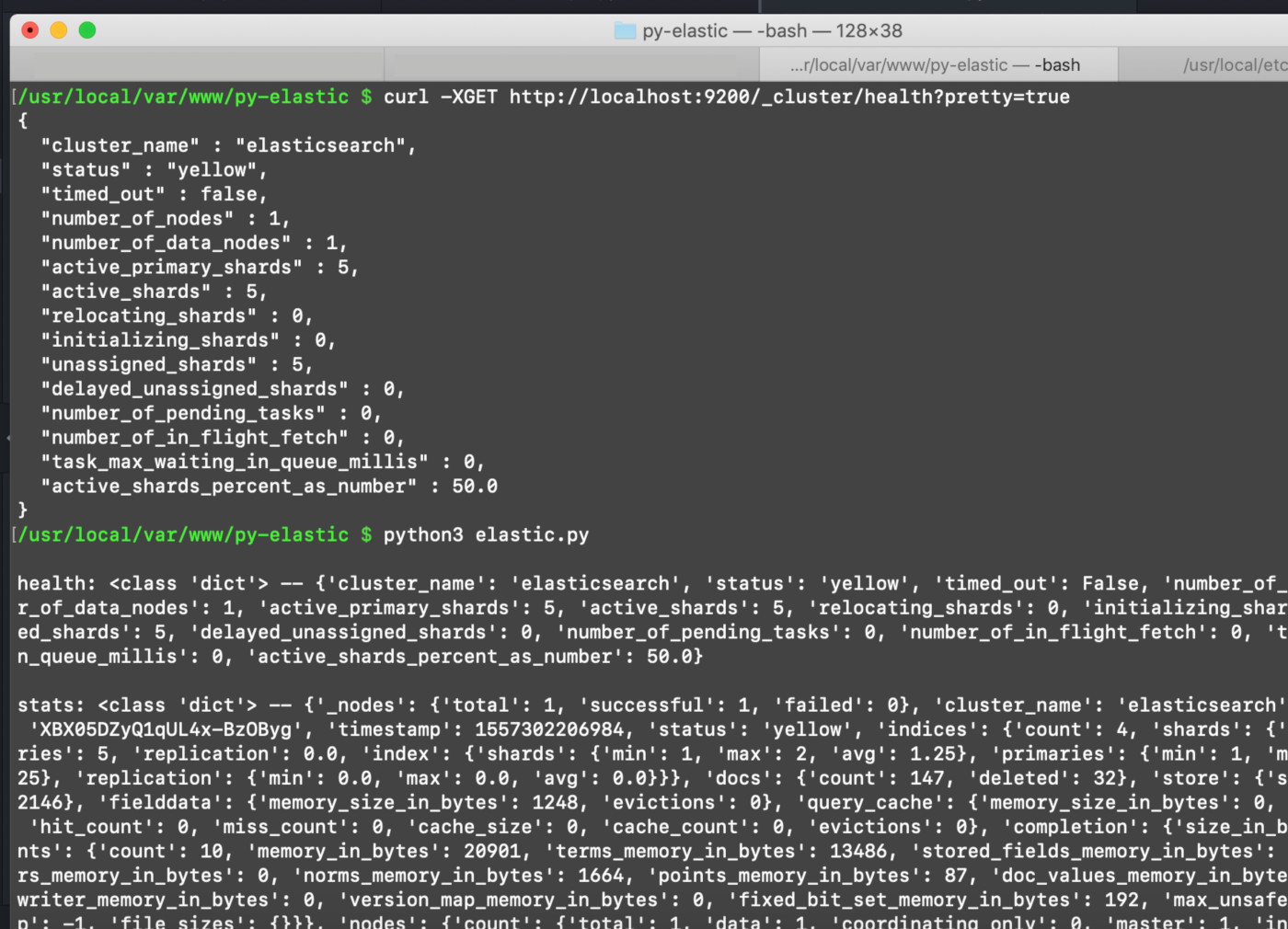 The call returns a dictionary, which looks like a large block of text. We’ll store those dictionaries in variables to parse through and use later on:

Iterate over a Python dictionary of Elasticsearch cluster information

The Cluster class has too many attributes to cover in this tutorial, but parsing a few examples will get you off to a good start.

Iterate over the Python dictionary returned by the cluster.health() method:

NOTE: If you’re using Python 2, use .iteritems() to iterate over the key-value pairs of a dictionary instead of .items().

The same process can be done for the cluster.stats dictionary as well, but keep in mind that the stats() method returns a dictionary with other dictionaries nested inside it.

You can use the following code to parse out the 'indices' key from the large amount of information returned by stats:

The cluster.stats() method returns a wealth of useful information about an Elasticsearch cluster’s indices and documents: As you can see, parsing the dictionary returned by the cluster.stats() method is a great way to quickly get information about an Elasticsearch cluster and its indices.

How to monitor the Elasticsearch cluster stats in Python

The Cluster class of the Elasticsearch Python client is a valuable tool to use in backend web applications that need to continuously monitor the health and status of an Elasticsearch cluster. In these types of applications, the script usually gets called at regular intervals, and the values are stored in a serialized “pickle” object to check for changes.

Select just a few of the cluster stats to monitor

It would require too much overhead and hard drive space to save every key in the dictionaries returned by the Cluster API. Instead, it’s better to just choose a few vital stats that you’d like to monitor:

Store the Cluster stats in a serialized Python object

Next, we’ll use Python’s Pickle library to store the cluster stats. The try exception block shown below will attempt to load serialized cluster stats data if such data exists, or it will create a new dictionary if the script hasn’t gathered any data yet:

The most efficient way to store this data is to create a new dictionary and use timestamps as its keys. This enables you to to store the stats for a certain point in time as the value of each key.

Get the latest timestamp of the collected cluster stats data

The code shown above will only make an API call if at least five minutes have elapsed since the last cluster stats and health call.

In our tutorial, we examined the Python code one segment at a time. Here’s the complete script that will return cluster stats data and serialize it for record keeping. If you’re worried about the serialized dictionary getting too big, you can simply write a function that deletes any timestamp keys older than a day or so. This function would use the dictionary’s built-in .pop() method (e.g. stats_to_save.pop(1234567)):