How To Use Python To Download Photos From An Elasticsearch Index

The example documents used in this tutorial have some very specific EXIF data stored on the Elasticsearch document, as shown here: The results of using the code provided here may vary depending on how the image was originally indexed and what EXIF data was included at the time of indexing.

Prerequisites for Indexing Photos to Elasticsearch

How to install all the Python libraries and dependencies using pip3

Python 2.7 is now deprecated and is scheduled to lose support by January 2020. The Python code used in this tutorial was written and tested with Python 3. As such, it is required to use the pip3 command for the PIP package manager for Python 3 to install the necessary libraries and modules.

How to install Pillow (PIL) for Python 3

Install the Python Imaging Library (PIL) with the following command:

The following command will upgrade Pillow to the latest version:

How to install pybase64 for the Base64 Python encoding library

To properly decode the images stored on the Elasticsearch index, install and upgrade the Base64 library for Python (libbase64) with the following command:

How to install the piexif Python library for the Elasticsearch images

Execute the following pip3 command to install the Piexif library. This will allow the image’s EXIF data to be edited and saved after it is exported from an Elasticsearch index: 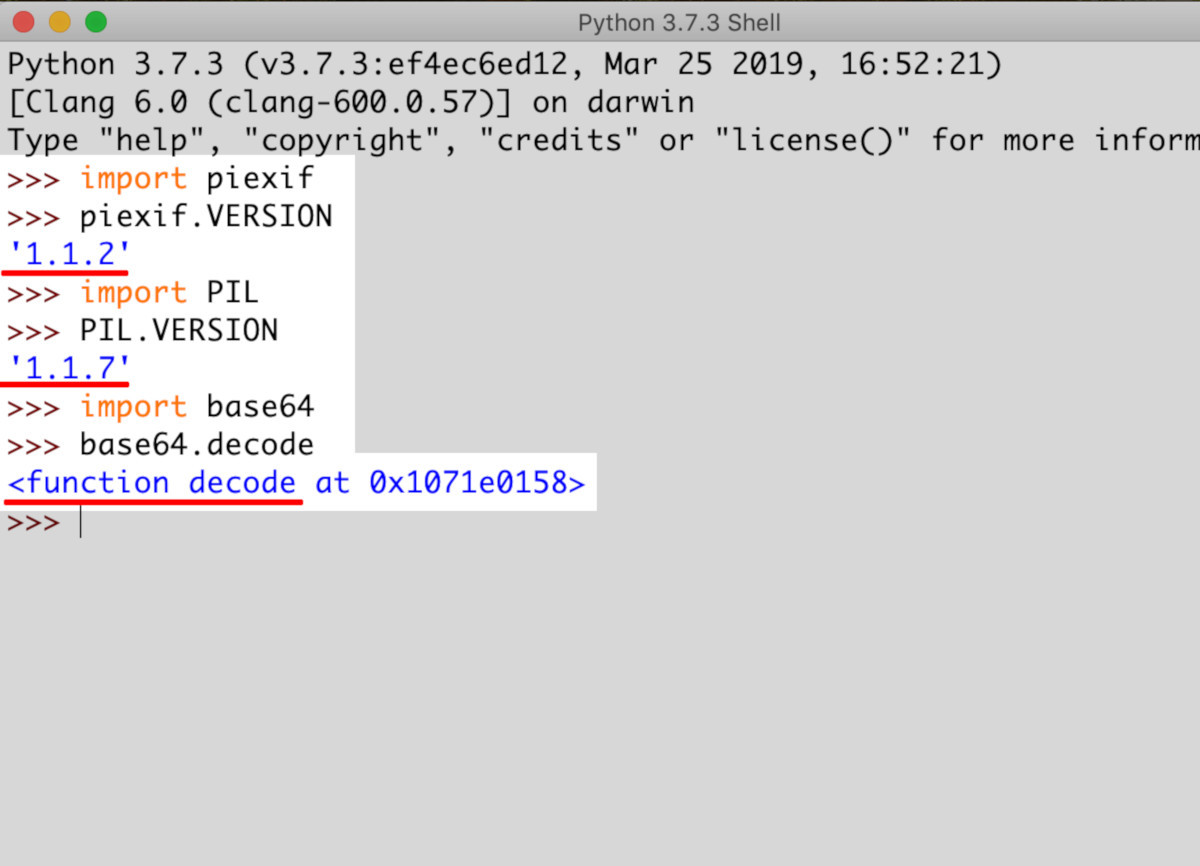 How to import the Elasticsearch client library

Import the Elasticsearch client class to declare an instance of the low-level client library with the following command:

Import base64 to decode Base64 data on the Elasticsearch document as follows:

How to import the PIL Image library for Python

Execute the following command to convert the Elasticsearch document into an image:

How to import the PIEXIF library for Python

Execute the following command to change an image’s EXIF data:

The ast library’s literal_eval() method is a safer way to evaluate string expressions than using Python’s eval() as it will only work on regular Python datatypes. Use the following command:

Import the numpy library using the alias np as the PIL has the fromarray() method that allows the creation of a PIL Image instance from a NumPy ndarray object, as shown here:

Declare an instance of the Elasticsearch low-level client library as follows:

Call the client instance’s get() method to obtain the image’s EXIF and raw pixel data from the Elasticsearch cluster:

How to Get the Image Data from the Elasticsearch Document Object

Execute some try and exception indentation blocks to obtain the image’s meta, EXIF, and raw data. Be aware the field names or dictionary keys for the document on the Elasticsearch cluster may be different from the examples in this tutorial.

Use the following commands to check for a Python KeyError exception when retrieving data:

Execute the below command to pass the raw string data for the image to the AST library’s literal_eval() method to create a Python list of the image’s pixel values by evaluating the Python list object casted as a string:

>NOTE: The Base64 library’s b64decode() method must first be called if the data is an encoded Base64 object.

Execute the following command to pass the data as a Numpy array:

This example will attempt to create an image that includes the RGBA alpha channel. It will create an RGB image instead if an exception is raised.

If there is some EXIF data stored in Elasticsearch document along with the pixel data, this example will parse it out of the dict object returned by Elasticsearch and put it in the PIL instance.

There are four different EXIF data types, and, depending on the data type, must be put into the correct dict object, as follows:

>NOTE: This example does not include all of the available EXIF data fields.

Nest all four of the data types inside another Python dictionary using the "0th", "Exif", "GPS", and "1st" dictionary keys, as shown here:

Now create a bytes object of the EXIF data using the Piexif library’s dump() method with the following command:

How to Save the PIL Image as an Image File

The final step is to save the PIL Image file in order to export the image as a file. The exif option must be set to the exif_bytes Piexif object created earlier:

Now open up a Finder or Windows folder window to confirm the image was created.

How to view the EXIF data of the exported Elasticsearch image

The image’s EXIF data can be viewed on macOS by opening the file using the “Preview” application for images. Inside Preview click on “Tools” in the menubar and then on “Show Inspector.” The inspector feature should have a (i) (information) tab and then an Exif section, as seen here: 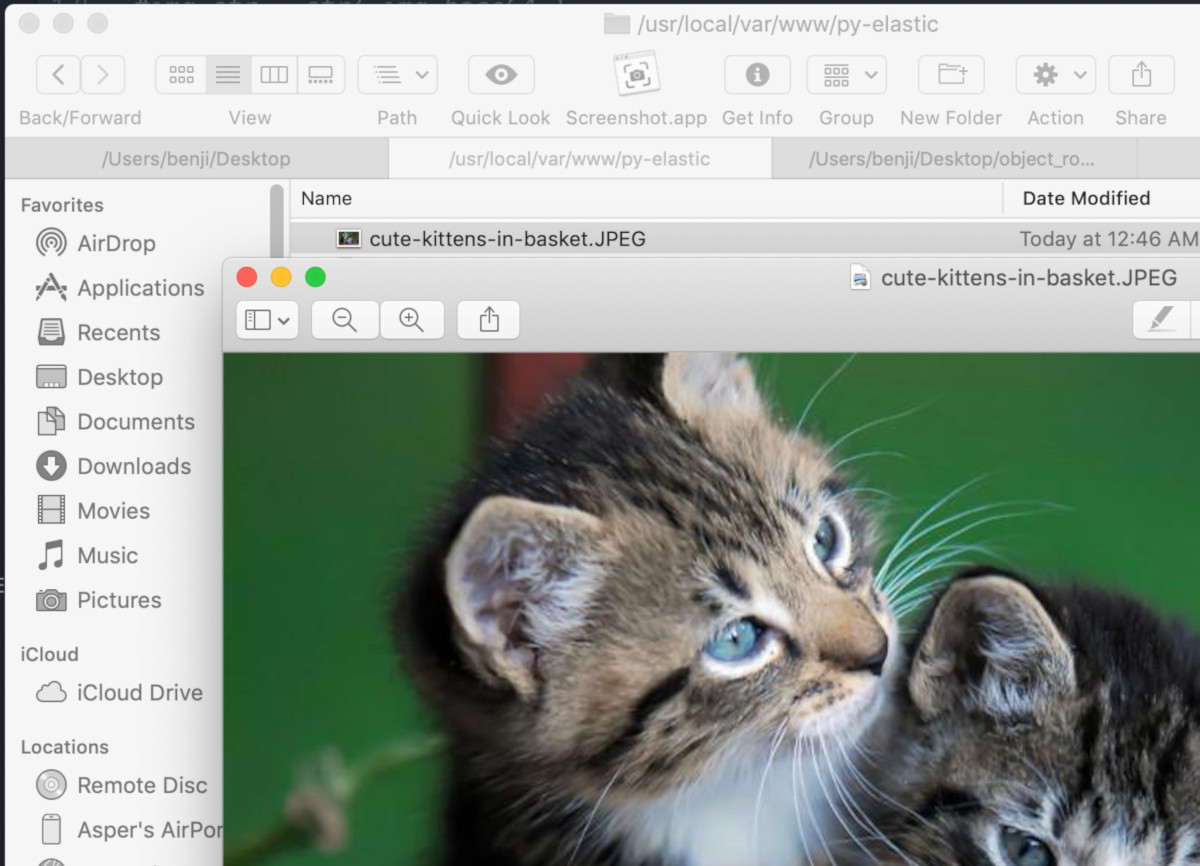