If you’re looking for a scalable full-text search engine, Elasticsearch is the natural choice. Elasticsearch provides users with an official API for some popular languages, including PHP. Elasticsearch’s low-level PHP client offers a streamlined interface that makes it easy to communicate with Elasticsearch. Common tasks such as indexing, deleting, updating and retrieving documents can be accomplished quickly and easily. In this tutorial, we’ll explain how to update an Elasticsearch document in PHP using the PHP client library, and we’ll also show you how to delete a document in a similar fashion.

Before we can attempt to update or delete an Elasticsearch document using PHP, it’s important to make sure a few prerequisites are in place. There are a number of system requirements for this task:

JSON Response from the Elasticsearch cluster by navigating to port 9200 in a browser: 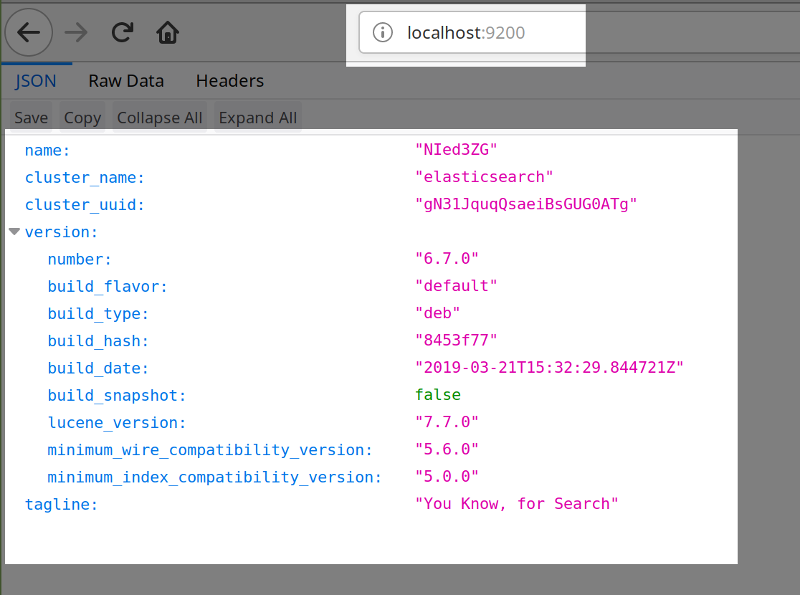 Create a new PHP script for the Elasticsearch client

You can use nano, vi or another terminal-based text editor to edit your script, which will connect with the Elasticsearch PHP library:

Connect the PHP script to the low-level Elasticsearch client

Next, we need to connect our script with the Elasticsearch client. In our example, the connection settings utilize HTTPS. If you’re using HTTP, simply change your $hosts array setting to http and set your port to 9200. All the other settings can stay the same.

You can use the PHP require() function to include the vendor directory’s autoload.php script:

The vendor folder we mentioned earlier contains the entire Elasticsearch PHP library that was created by Composer. This folder should be in the same directory as your script; if it isn’t, then the low-level client either wasn’t installed properly, or Composer was run in a different directory.

You can also specify the path, or use the current working path for the script by appending the __DIR__ constant: `php require DIR . ‘/vendor/autoload.php’ “

Configure the PHP $hosts array to match the Elasticsearch configuration

The next step will be to configure the $hosts array so that it’s consistent with the settings in your server or machine’s elasticsearch.yml file:

Once your $hosts array is configured correctly, you can use it to create a new $client instance of the client library.

NOTE: Certain options in the array (such as user and password) may not be necessary if they haven’t been configured yet.

Create a new client instance of the Elasticsearch PHP library

You can create a new client instance of the PHP low-level client for Elasticsearch by invoking the create() method in the ClientBuilder library:

The built-in methods of this $client object can be used to make changes to an Elasticsearch document.

You can create a $params PHP object array, which is used to select a document in an Elasticsearch index by passing the index name and document’s "_id" as parameters:

When you create this object array, be sure the values are properly passed as they are case sensitive. Also keep in mind that the document 'id' must be passed as a string, not as an integer.

Updating an Elasticsearch document in PHP

Let’s look at an example of the code needed to update an Elasticsearch document in PHP. To accomplish this, you need to specify the index, type, and the id to identify which document is getting updated. Any fields and values you include in doc, which is inside the body parameter, will be merged into the updated document. In this example, we’re setting the value of age to 7:

As you can see in the example above, you can pass integers as well as strings when you update a document. Just make sure the index’s _mapping defines the field being updated as an integer type.

Getting a response from Elasticsearch

You can use a try and catch block to catch an Elasticsearch exception by calling the update() method within the try brackets:

Use Kibana to verify the API call was successful

You should see something similar to the image below in Kibana’s result pane:

Another way to update an Elasticsearch document is to add a new field to the document. In this example, we’re adding a field named complexion:

As we did with the previous update, we can use the Kibana Console to verify that our update operation was successful:

You can use the command shown below to verify the deletion in Kibana:

If the delete was successful, you should see something like the following in your Kibana’s result pane:

* Notice that it returned found : false.

Although we examined the code one section at a time in this tutorial, you can check out the PHP script in its entirety below: