How To Setup A MongoDB App Using The Flask Framework

Written by Data Pilot
July 15, 2019
Subscribe
Like
Have a Database Problem? Speak with an Expert for Free
Get Started >>

This tutorial will explain how to use the Flask micro-framework to create a MongoDB restful API in Python using the flask_pymongo library. The Flask app for MongoDB serves as a lightweight wrapper for the PyMongo client driver needed for creating a python HTTP client for MongoDB. This Flask-PyMongo tutorial will provide examples for installing PyMongo and Flask PyMongo packages for Python 3 and configuring Flask for MongoDB.

NOTE: Python versions 2.7 or earlier are not recommended for the operations in this tutorial as it is deprecated and will lose official support by 2020.

How to Install the PyMongo and Flask-PyMongo Python Libraries

Optionally specify the Python 3 version to install the packages and then use the below python3.6 or python3.7 commands:

Here is how to install the Flask modules using pip3 for Python 3.6:

How to handle the Flask app returning a ‘ModuleNotFoundError’ error

WARNING: Do not install the isolated bson library for PyMongo using pip or there may be conflicts that will produce ModuleNotFound errors. If these conflicts or errors occur, use pip3 to uninstall the bson, pymongo and Flask-PyMongo modules and then reinstall only the last two.

Execute the following command to install the command-line tools for Flask on Linux from the apt repository:

Type flask or flask shell in a terminal window. In the case of multiple installations, execute the flask --version command to determine what version of Python 3 is installed.

How to Create a Directory for the MongoDB Application

Create a directory in the web root directory for the Flask application. Typically this will be /var/www/html on an Apache server in Linux. Execute the following mkdir command in a UNIX terminal:

How to create a Python script for the Flask application

Change the directory using the cd command and create a new Python script for the Flask application. The following example uses the name mongo_connect.py for the Python script:

Use a text editor, like nano or gedit, to add code to the new script.

This section will explain how to edit the Python script for the Flask application that will run the RESTful API for MongoDB.

First, use the following commands at the start of the Python script to import the Flask and PyMongo modules:

Confirm the domain URI, port, database, secret key and any other environmental variables are set properly, as shown here:

NOTE: In newer versions of Flask-PyMongo, the MongoDB client’s database will return None if a variable is not specified:

How to pass the application object to Flask’s PyMongo class

Pass the Flask application configuration to the PyMongo() method with the following script:

Use the application’s route parameter to specify the route for the below function. Use the app’s routing to create multiple functions that can be used on different pages of your website.

The following command shows how to declare a function that will return MongoDB data as HTML:

How to Create an HTML String from MongoDB Data

The MongoDB database and collection must be explicitly cast as a Python string (str) when concatenating the HTML string in order to avoid a TypeError. The following example shows how to get Flask to return a MongoDB database, its collection and single documents in the collection:

NOTE: Set debug to True whenever running the app in order to make changes to the code without having to restart the Flask server each time.

How to Export the Application Path and Run the Flask Server

First, open a terminal window and navigate to the app’s directory. Now use the belowexport command to set the debugging mode and export the path to the Python script. Lastly, as shown in the following example, use the run command to start the Flask-MongoDB server.

If any issues occur, execute the following command to obtain help with the shell commands or for help exporting the Flask app:

Note that Flask runs on the default port 5000. If it cannot run and connect to MongoDB because of an “[Errno 98] Address already in use” OS error, then execute the following terminal command to determine the PID of the service occupying the port:

Take the five-digit PID number from the response, typically the second column from the left, and use it after the following kill -9 command to terminate the process:

Below is a screenshot of the Wergzeug interactive debugger catching a Python syntax error in the Flask application: The MongoDB database and collection data should load as HTML in a webpage when navigated to http://localhost:5000 in a browser: 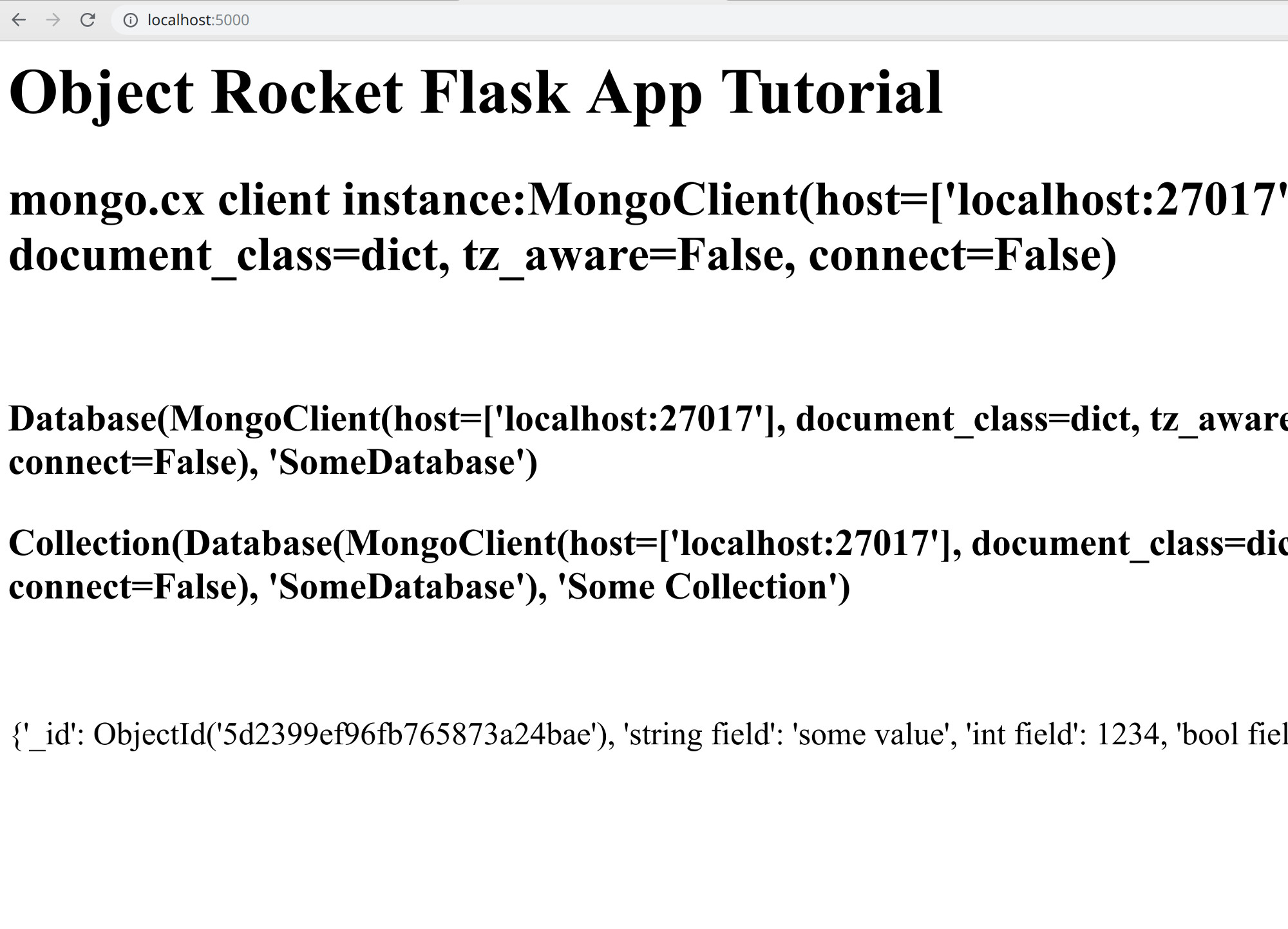 Source HTML of the MongoDB data returned by Flask-PyMongo This Flask-pyMongo tutorial explained how to easily create a MongoDB restful API in Python. Explanations were provide for how to use the Flask app with MongoDB to create a directory and a Python HTTP client with MongoDB, how to install PyMongo and flask pyMongo packages for Python 3 and configure flask for MongoDB. Instructions were also provided for using the export command to Troubleshoot Flask and creating a Python script for the Flask application. Remember to always set debug to True when making changes to the code to prevent having to continually restart the Flask server.