Contents
Introduction Prerequisites to parse a line-by-line text file index for Elasticsearch documents with Python bulk How to Import the Necessary Python and Elasticsearch Libraries How to use the Python’s time library to store the epoch time of when the script starts How to Define a Python Function that will Load, Iterate and Parse Data from a Text File How to open the text file and read its contents How to decode the bytes string of the text file using the UTF-8 encoding How to make an empty dict for the Webster’s Dictionary entries and definitions How to parse the line’s string to look for a new dictionary entry How to parse the line’s string and evaluate it for dictionary definitions Two ways of looking for definitions in the copy of Webster’s Dictionary used in this tutorial How to catch errors, set the definition count for each entry and return the dict object How to Call the get_webster_entries() Function to Get all of the Dictionary Entries How to Create Elasticsearch Document Python Objects for the Dictionary Entries How to use the dict object’s items( ) method to iterate over its key-value pairs How to typecast each field’s value so Elasticsearch won’t return any ‘_mapping’ errors How to nest the document’s _source data inside of another Python dict How to append the nested Python dict Elasticsearch document to the list How to Index the Webster’s Dictionary Entries as Elasticsearch Documents using the Python Client How to call the Elasticsearch “helpers” library’s bulk( ) method to index the list of Python documents How to use Python’s JSON Library to Print the API Response Returned to Elasticsearch How to Run the Python Script and Wait for a Response to the Bulk API to Elasticsearch How to use Kibana to verify that the Webster Dictionary documents successfully indexed Conclusion Just the Code

This tutorial will explain how to parse lines in a text file and index them as Elasticsearch Documents using the Python programming language. To legally parse a line-by-line text file index for Elasticsearch documents with Python bulk, the user must have the rights to use to the content being inserting into a MongoDB collection. Alternatively, an opensource/public domain text document should be used. To demonstrate how open, iterate and parse the data in a text file, this tutorial will use the opensource eBook titled “Webster’s Unabridged Dictionary by Various.” This text can be found on the Gutenberg website.

NOTE: Make sure to replace the "localhost" domain and its port with the settings that match the Elasticsearch cluster.

How to Import the Necessary Python and Elasticsearch Libraries

The API call to Elasticsearch may take some time to execute, depending on the size of the text file and the number of documents being parsed. Use the time.time() method call to return a float number representing the epoch time and store it in order to check it at the end of the operation to see how many seconds have passed since the start of the script. Execute the following code:

How to Define a Python Function that will Load, Iterate and Parse Data from a Text File

The following script show how to use Python’s def keyword to define a function that will open the text file and parse its data, line-by-line, or to order parsing out dictionary entries:

How to open the text file and read its contents

The following script shows how to use Python’s with keyword command to open the text file and have it return an _io.BufferedReader object that can be decoded as a bytes object:

The following screenshot shows how opening the text file in an indention using with allows Python’s garbage collector to free up the system resources after the BufferedReader object is read. 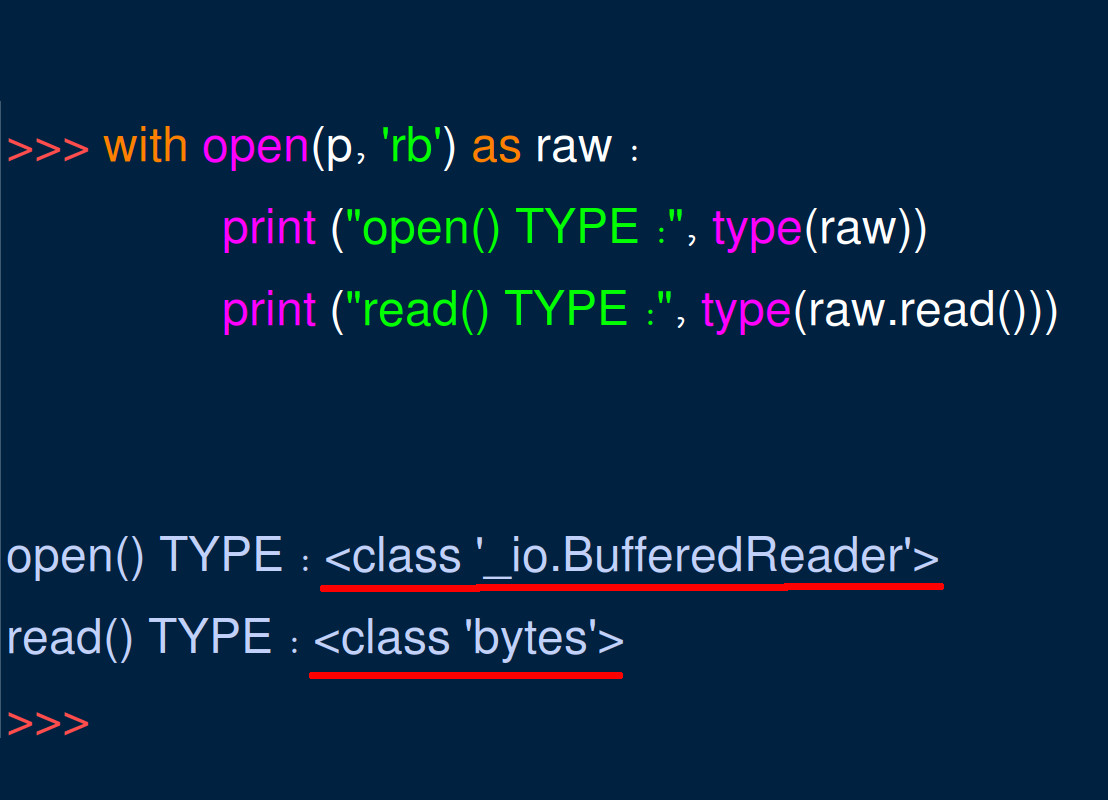 Execute the following script to call the bytes object’s decode() method as a UTF-8 encoded string and ignore any encoding errors:

The above script shows how to have the string object’s split() method return its data inside list object ([]) that uses the return key and newline characters ("rn") as its delimiter.

Execute the following script to declare an empty dict object ({}) that will have the dictionary entries added to it and then iterate over the list of string lines from the text file using the enumerate() function:

As shown below, be sure to increment the def_count integer object each time a new definition for the entry is found:

This public domain version of Webster’s Dictionary has two ways it delimits new definitions for a term. The first is it will have "Defn:" at the beginning of the line; the second is it will have a number and a period, e.g. "4.", in the string. Here are some examples:

How to catch errors, set the definition count for each entry and return the dict object

As shown in the following examples, the definition for each count’s value must be updated for each entry after the try-catch indentation end:

NOTE: Make sure to return the complete dict object, containing all of the dictionary entries and definitions, at the end of the function.

NOTE: Make sure to pass a string of the text file’s name and directory path, if it’s not in the same directory as the Python script, to its function call.

How to Create Elasticsearch Document Python Objects for the Dictionary Entries

The function in the above section should have returned a dict object containing all of the text files parsed string data. The next step is to create a Python dict object for each dictionary entry in order to make JSON document objects for the Elasticsearch Bulk API index call.

Execute the following command to set the _id counter and instantiate an empty Python list for the Elasticsearch documents:

Each entry’s list of definitions is nested inside the key for the entry’s title. Execute the following script to begin another items() iteration for the nested key-value pairs that contain the entry’s definitions:

The new dict object (doc_source) created inside of the outer key-value iterator is for the Elasticsearch document’s _source data. Be sure to create a new field key, for each definition, in the doc_source object inside the iterator for those definitions.

It’s not necessary, nor recommended, to create a _mapping schema for the index beforehand. This is because it would require creating enough definition “fields” for all of the entries. However, the data type must be uniform for each field, in every document. The best way to accomplish this in Python is to explicitly typecast the key’s values, using the str() and int() functions respectively, with the following script:

NOTE: Do not create a JSON dictionary object for entries without definitions:

Make sure to increment the id_num integer counter for the document’s _id, but only if it’s an entry that has some content, as shown here:

As shown below, the final dict object for the Elasticsearch document will have its _source data nested inside of it with an _id key so Elasticsearch will know what document ID to assign:

NOTE: The Python dictionary object’s _id key can be omitted and Elasticsearch will dynamically generate an alpha-numeric _id for each document.

Execute the following code to append the nested dict object, representing an Elasticsearch document, to the list object instantiated earlier:

This list object will be passed to the Elasticsearch library’s bulk() method after the iteration is complete so it can index all of the documents.

Execute the following script to declare a new client instance of the low-level Elasticsearch library, taking care to pass the correct values to its string parameter for the cluster:

Execute the following script to pass the client instance, and the Python list of Elasticsearch documents, to the helpers.bulk() method call and have it return a response:

NOTE: The Elasticsearch document type has been deprecated since version 6.0 of Elasticsearch. Just pass the string "_doc" to the doc_type parameter to get around this issue. Also, be sure to pass a string value to the index parameter so that Elasticsearch knows the index name these documents will be added to.

Execute the following script to use the dumps() method call in Python’s built-in json library. This will print the JSON response, returned by the API call to the Elasticsearch cluster, with some indentation to make it more readable:

Make certain to get the time difference between the end and the start of the script, to see how many seconds have elapsed, by adding the following code to the end of the script:

Make sure to save any changes in an IDE or text editor and then run the Python script in a terminal or command prompt window, from the script’s directory, by executing the following command:

The entire execution run-time for the Python script, including the API response from the Elasticsearch, may take around 30 seconds. However, it may take longer depending on how large the text file is and how many documents are being indexed with the bulk() method call. An example with the run time is as follows:

As shown in the above example, the script ran for over 26 seconds as it attempted to upload and index almost 100k documents to an Elasticsearch index. Following is a screenshot: 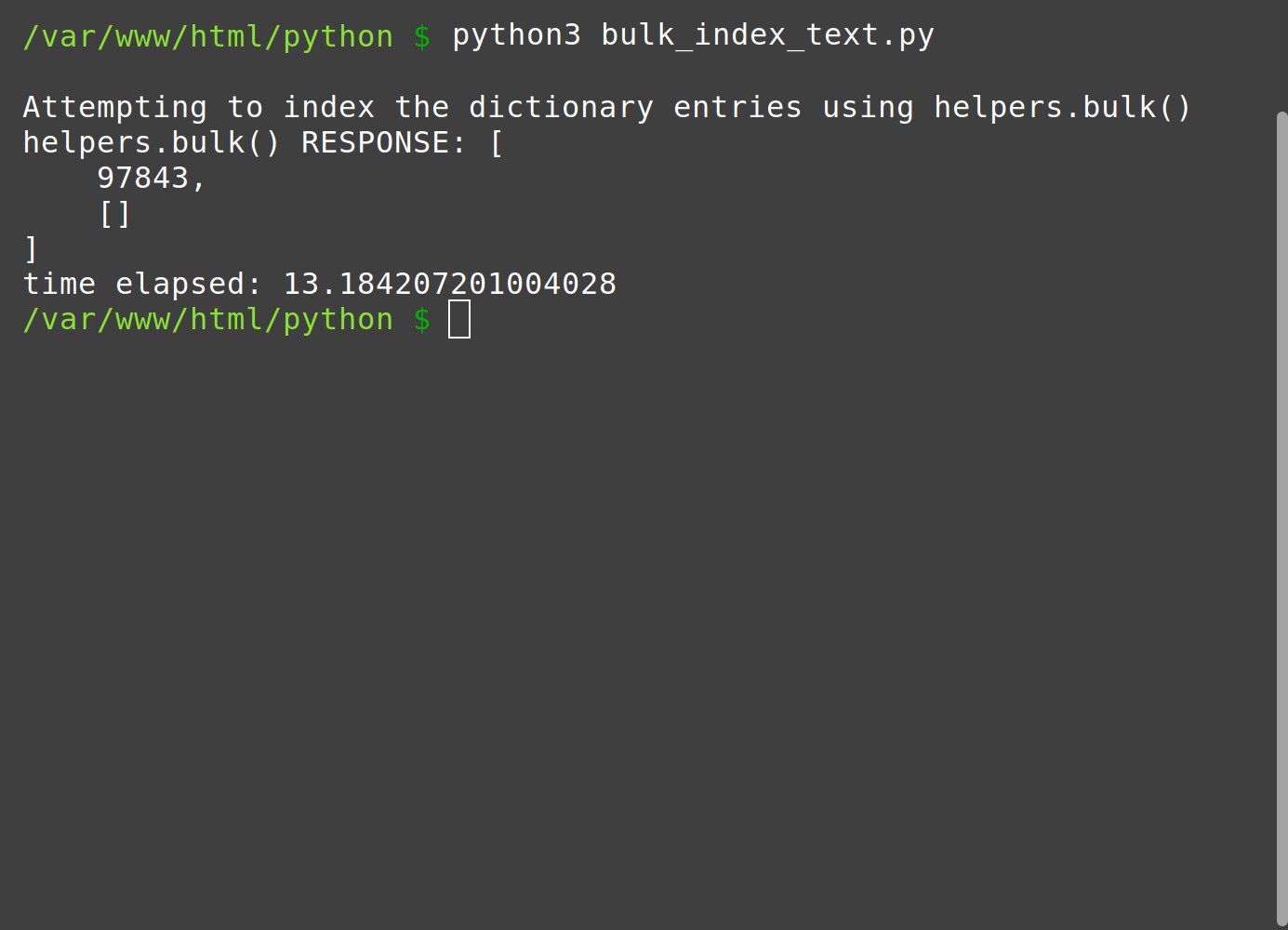 If the Kibana service is installed and running on the Elasticsearch cluster, it can make an HTTP request that can query different entries in the dictionary index.

The following is a GET request that looks for all of the Webster Dictionary’s entries that have three definitions:

Following is a screenshot: 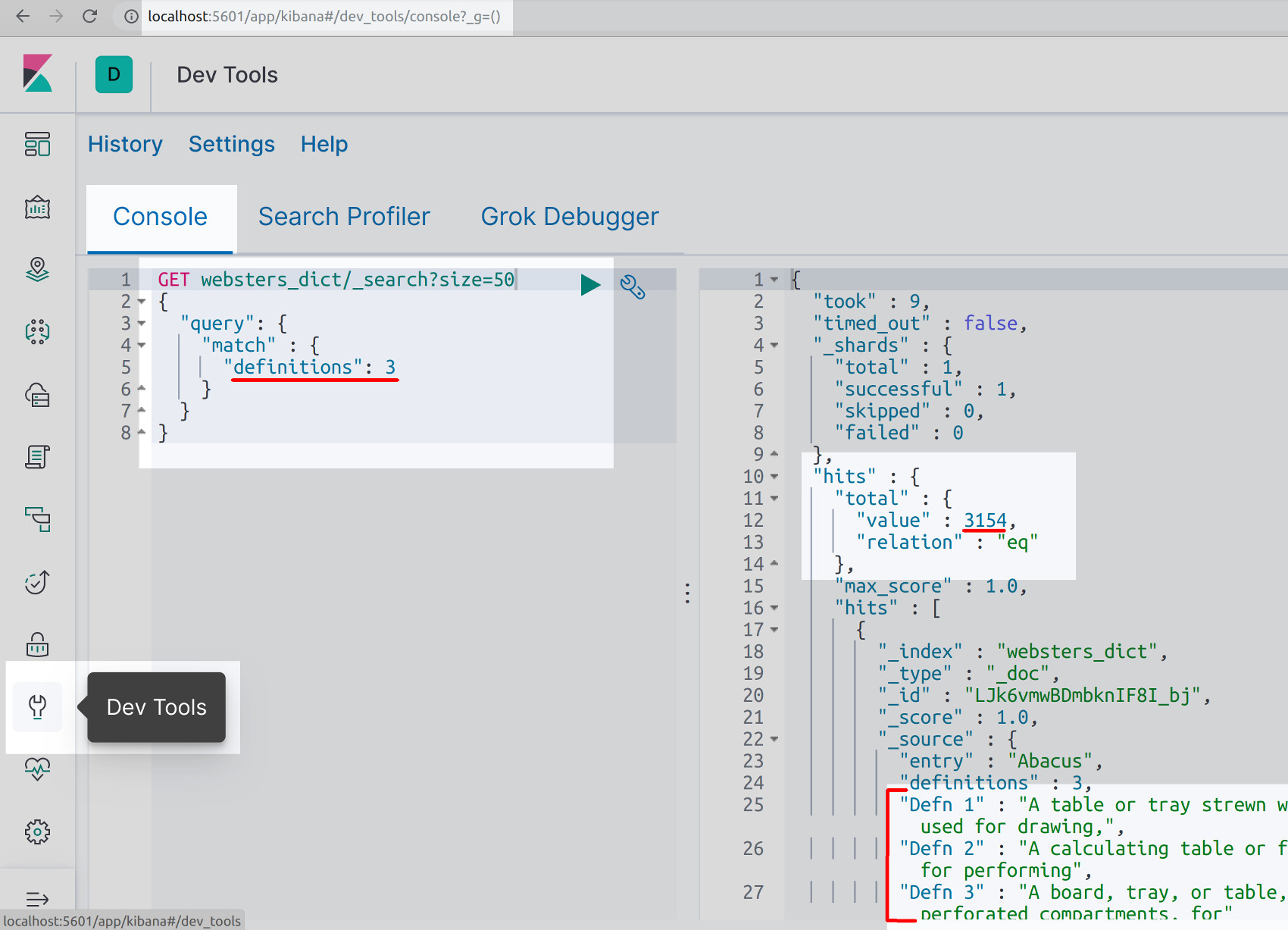 NOTE: By default, Kibana and Elasticsearch will only return up to 10 document "hits" in its JSON response to _search queries. When necessary, use the ?size= parameter in the REST header to instruct Elasticsearch to return more than 10 documents.

Indexing dictionary entries to an Elasticsearch index, using queries to look up definitions for terms, is a great way to build a database for a dictionary web, mobile or desktop GUI application.

This tutorial demonstrated how to open a text file in Python and iterate the data to parse and create Elasticsearch documents. The article specifically explained how to import the necessary Python and Elasticsearch libraries, use Python’s time library and define a Python Function to load, iterate and parse data. The tutorial also explained how to decode the bytes string of the text file, how to make an empty dict for the Webster’s Dictionary entries and definitions, how to catch errors and set the definition count for each entry and return the dict object. Finally, the tutorial covered how to index the Webster’s Dictionary entries as Elasticsearch documents using the Python client, print the API response returned to Elasticsearch and use Kibana to verify the Webster Dictionary documents were successfully indexed. Remember that to legally parse line-by-line in a text file index for Elasticsearch documents with Python bulk, the rights to the content being inserting into a MongoDB collection must be owned by the user or inserted with permission from the owner.