How To Modify Elasticsearch Documents Using The Node.JS Low-Level Client

If you’re working with data in Elasticsearch, you’ll probably need to modify, or update, your documents from time to time. This task can be accomplished quickly and easily in NodeJS — a runtime environment that allows Javascript code to be executed outside of a browser. In this tutorial, we’ll explain how to modify Elasticsearch documents in NodeJS using Elasticsearch’s client library.

Before we attempt to modify Elasticsearch documents in NodeJS, it’s important to make sure a few prerequisites are in place. For this task, there are a few key system requirements:

As an alternative, you can simply navigate to port 9200 of your localhost server or domain name in a browser:

NOTE: As of April 2019, Elasticsearch version 7.0 is only available as a beta release for the Node.JS client library.

NOTE: Elasticsearch requires that the version of Node be at least v8.

Create a new Node.JS project for the Elasticsearch client

In our example, we’ll use the folder name elastic-nodejs:

The entire package.json file (which contains the Elasticsearch client library’s dependencies and meta data) must be in your project folder before you run the sudo npm install elasticsearch command. Consult Elastic’s official Node.JS github repository for more information.

Once you’ve verified that a local copy of the repository’s package.json file has been made in your project folder, you can run the following command to install the client library:

Connecting Node to an Elasticsearch cluster

Next, we’ll create another Javascript file, using the nano editor, and call it test.js:

Once you’re in the Nano editor, paste the snippet of Javascript code shown below into your terminal window. Be sure to change the username, password, domain name, and port to match your Elasticsearch configuration:

To save the script in the nano editor, press CTRL+O, and then press CTRL+X to exit and return to the terminal. Once you’re back in the terminal window, run node test (substituting the name of your JS file for “test”), and it should return information about the health of your Elasticsearch cluster: 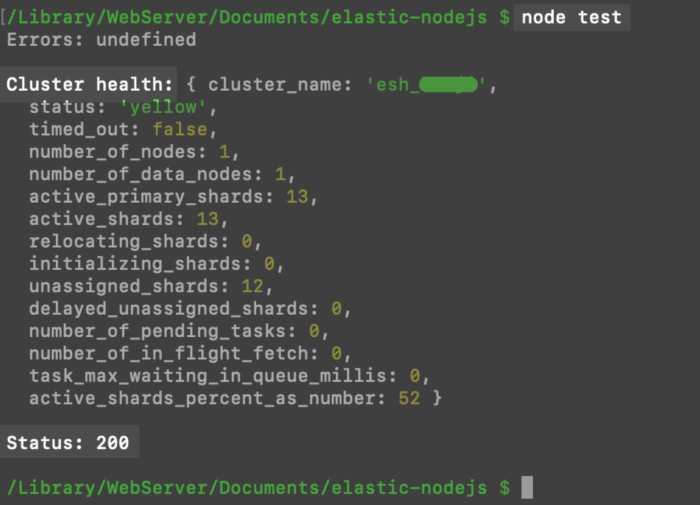 Let’s look at an example of this syntax:

When you pass the _id field as a key in a Node.JS API call, be sure to refer to it as id without the underscore (_). Similarly, the document type and index fields do not have underscores,

Create a JS array for the Elasticsearch document’s body:

Next, we’ll create a Javascript associative array object that contains a nested doc array. This nested array contains all of the new _source data that we’ll use to modify the document:

You can see in this example how easy it is to create a timestamp marking the precise time the update request was made by using Javascript’s built-in Math.floor() method, which returns an integer representing the epoch time in seconds.

Create another JS array, representing the target document, that will be passed as a parameter to the client instance:

The docParam array used in this example allows the client to find the index, and one of the documents found in that index, in order to make an API call to the client’s update() method. This will update the document ID specified in the array.

Pass the arrays as arguments while calling the client’s update() method:

At this point, we’re ready to put all three of the code components we’ve looked at (the document body array, the document parameters array, and the call to the client.update() method) into our Javascript file and save it. In your terminal window, navigate to the directory of your Node.JS project folder, and run the node command followed by your Javascript filename:

If the update is successful, you should see some sort of response. You can make an HTTP request using cURL, or you can use the Kibana Console UI in a browser, to confirm that the document modification was successful: 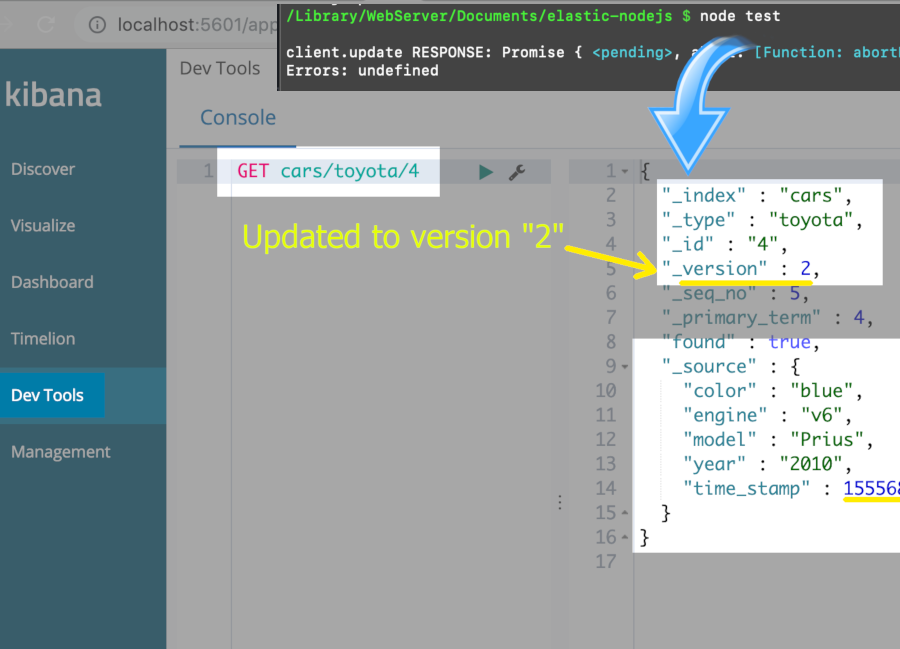 WARNING: If the document id (or the name of the index) specified in the parameters array does not exist in the server’s Elasticsearch cluster, then the client.update() method will return a document_missing_exception error, and the update call will fail.

In some cases, you might not know the ID of the document(s) that need to be updated, but you have a certain set of criteria that you’d like to use to decide which ones get changed. The syntax for an updateByQuery API call would follow this structure:

Using the same index that we used in the previous example, a call to that method would look like the following:

Let’s look closely at what just happened in this code. After the updateByQuery() API call, using the parameters we provided, every Toyota Corolla in the index will now have a color of pink.

Modifying, or updating, documents in an Elasticsearch index is a common administrative task. With the Elasticsearch client library for NodeJS, the process couldn’t be simpler. Using the step-by-step instructions included in this tutorial, you should have no trouble modifying Elasticsearch documents in NodeJS.

If you’re already familiar with Node.JS and the Elasticsearch Update API, here’s the Node.JS code to modify an Elasticsearch document in its entirety: