How To Install And Set Up The Go Client For Elasticsearch

Written by Data Pilot
May 15, 2019
Subscribe
Like
Have a Database Problem? Speak with an Expert for Free
Get Started >>

How To Install And Setup The Go Client For Elasticsearch

Elasticsearch is known for its speed and flexibility, allowing you to store and query large volumes of data with ease. It currently has clients for several programming languages, including the popular Go (GoLang) language. The install and set up of the Go client for Elasticsearch is a simple process that will enable you to communicate with Elasticsearch from any GoLang application. In this tutorial, we’ll show you how to install and setup the GoLang Elasticsearch client.

If you’ve already installed both GoLang and the Elasticsearch client for Go, you can safely skip this section. If not, then visit the downloads page for GoLang. You can get the MSI installer for Windows or just download the TAR source for Linux.

You can find a package for macOS on the GoLang downloads page, but the easiest way to install Go is to use the Homebrew package manager for macOS. This can be accomplished using the following commands:

Set up the ‘GOPATH’ on your system

Next, you’ll need to set up the GOPATH for your system. The default GOPATH on UNIX-based systems like Linux or macOS is $HOME/go, while on Windows it will be %USERPROFILE%\go.

Use the pwd command to determine the current directory. Then, use that path in the following command to append it to GOPATH:

If the Go compiler running on the server is version 1.11 or newer, GOPATH is no longer mandatory, which means you’re able to build your application outside of the GOPATH.

Running the Golang ‘go’ command in the terminal

Once you’ve finished installing everything, open up a terminal or command prompt window, type go, go version, or go help, and press Return. You should see output that looks like the following: 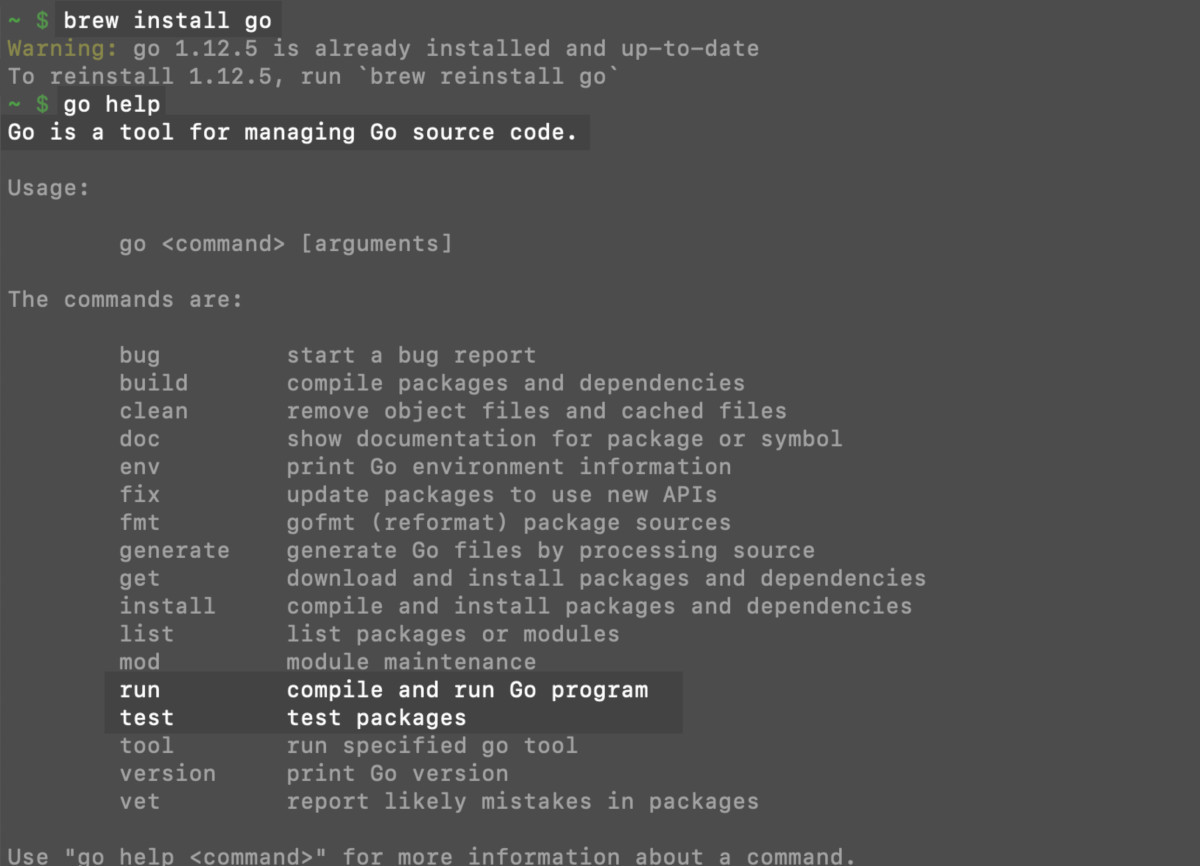 A GoLang library package that includes a go.mod file is called a ‘module’. In this tutorial, we’ll be installing the GoLang Elasticsearch module, go-elasticsearch.

Make a cURL request to the port that Elasticsearch is running on to get information about the cluster: 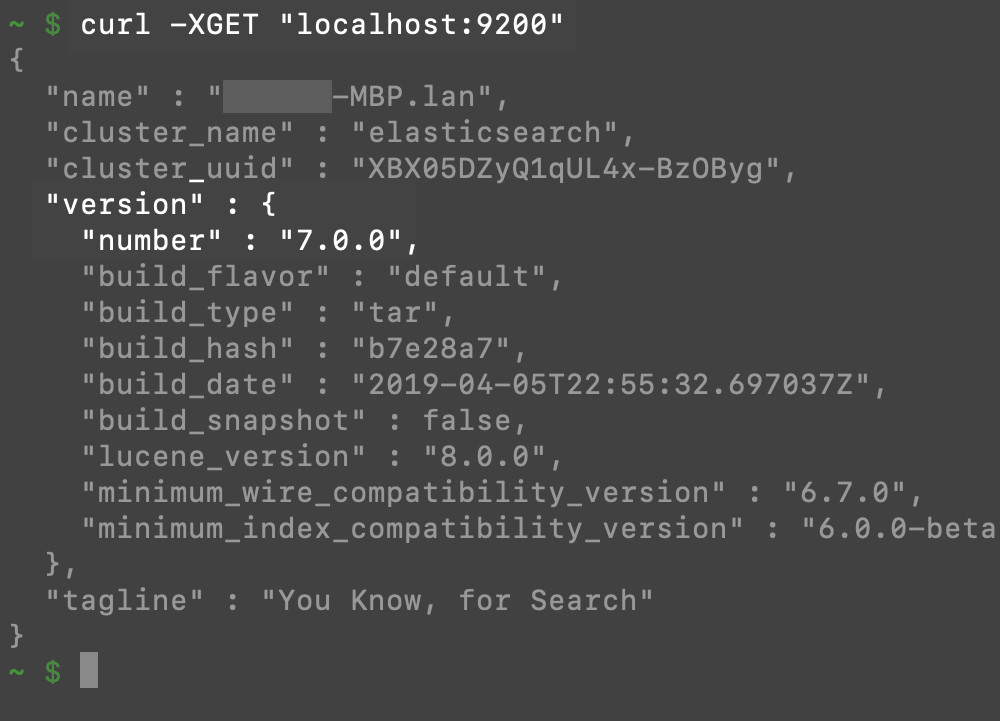 Set up a project for the GoLang Elasticsearch app

NOTE: You can use another version besides require github.com/elastic/go-elasticsearch/v8 master; in fact, even multiple Elasticsearch versions in the same project are supported.

If you use sudo to create the project directory, or if the permissions for this folder are not 755, you’ll need to use chmod to avoid a permissions-related error:

At this point, you will see that the GoLang compiler created a go.mod file in the directory for you.

Create the ‘main.go’ file and use the ‘go run’ to run the app

The next step is to create a new file called main.go and use an editor such as nano to edit it. The file should contain the following:

Paste the package main text shown above into your main.go file and press CTRL+O and CTRL+X to save and exit: 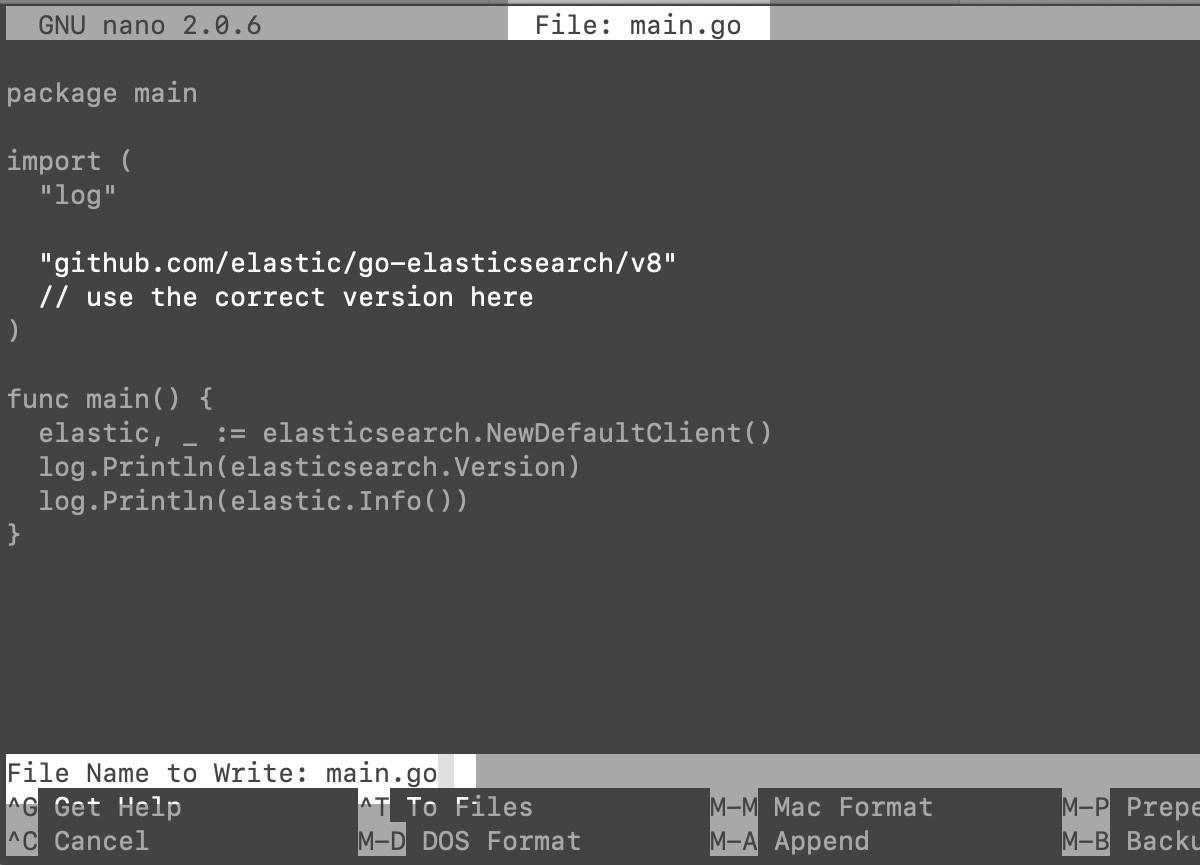 In a terminal window, navigate into the application directory and use Go’s run command to test your connection to the Elasticsearch cluster:

Installing the ‘go-elasticsearch’ package in a GoLang directory: 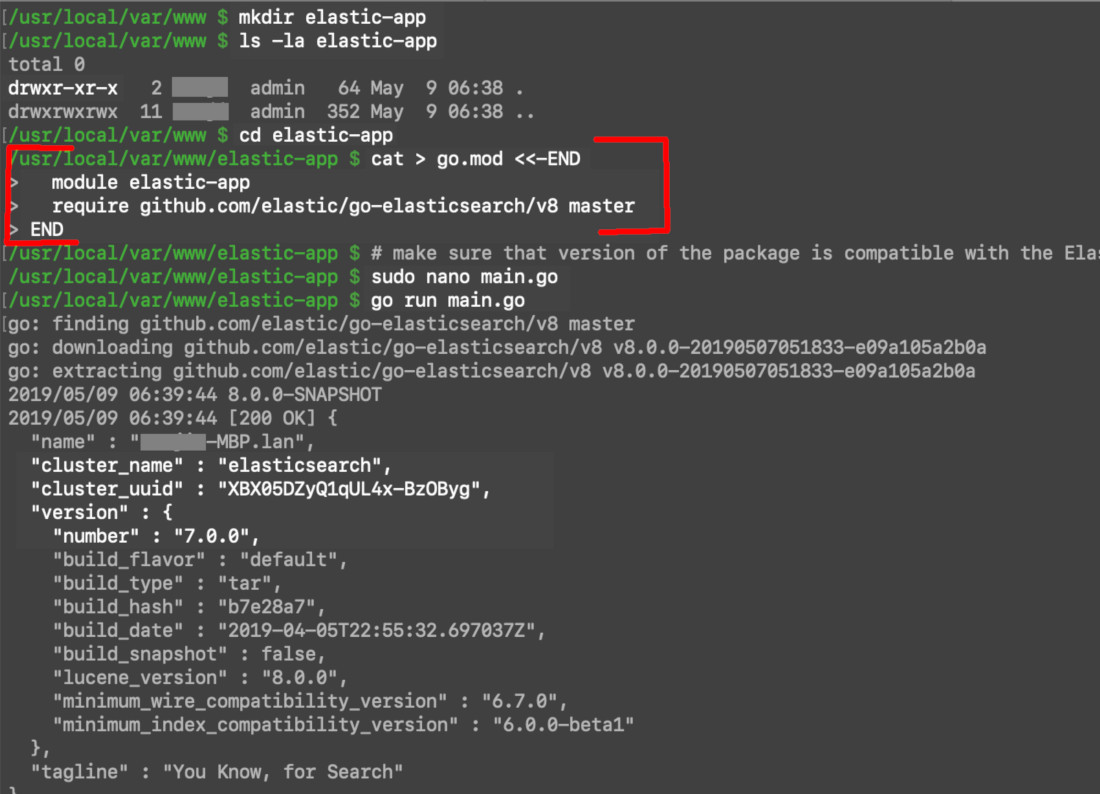 If the setup process was completed correctly, the Elasticsearch app should return some cluster information after calling the elastic.Info() method in the main.go file. The screenshot above shows an example of the type of information that would be returned to you.