You can name your index in several ways. There are limitations though. They are:

It’s good to know: For API calls, the Elasticsearch client has a way to get around naming the same keywords as Python’s. Instead of using type, it uses doc_type, and in place of from, it uses from_.

Create a new index with the Python library. Use a client instance.

To create a new index, use the indices inner class.

You can also delete the indices class in Elasticsearch using this technique:

Get every indices class in a cluster

Its good to know: To iterate Python dictionaries, the items() is the way to do it in Python 3. However, if you’re still using Pyton 2.x until it’s expires in 2020, use interitems().

Use get_alias().keys() to get index names only. It will be Python keys with no additional information.

Just as you would do to iterate a regular list object, you can do the same for dict_keys.

Below is an example of the dict_keys method in action getting all indexes in Elasticsearch.

How to Troubleshoot API Calls

>It’s good to know: Use an ignore parameter with the one or more status codes you want to overlook when you want to avoid raising an exception.

Watch for the elasticsearch.exceptions.ConnectionError. If this occurs, verify that your Elasticsearch is running. To start Elasticsearch in Linux or any other UNIX-like system, run service.

Wait a couple of minutes and then in go to your server’s port 9200 located in your browser. Optionally, verify if Elasticsearch has stopped running by the request: cURL URL GET

This image shows an example of running the service command in a Linux Unix-like system to start Elasticsearch and Kibana. 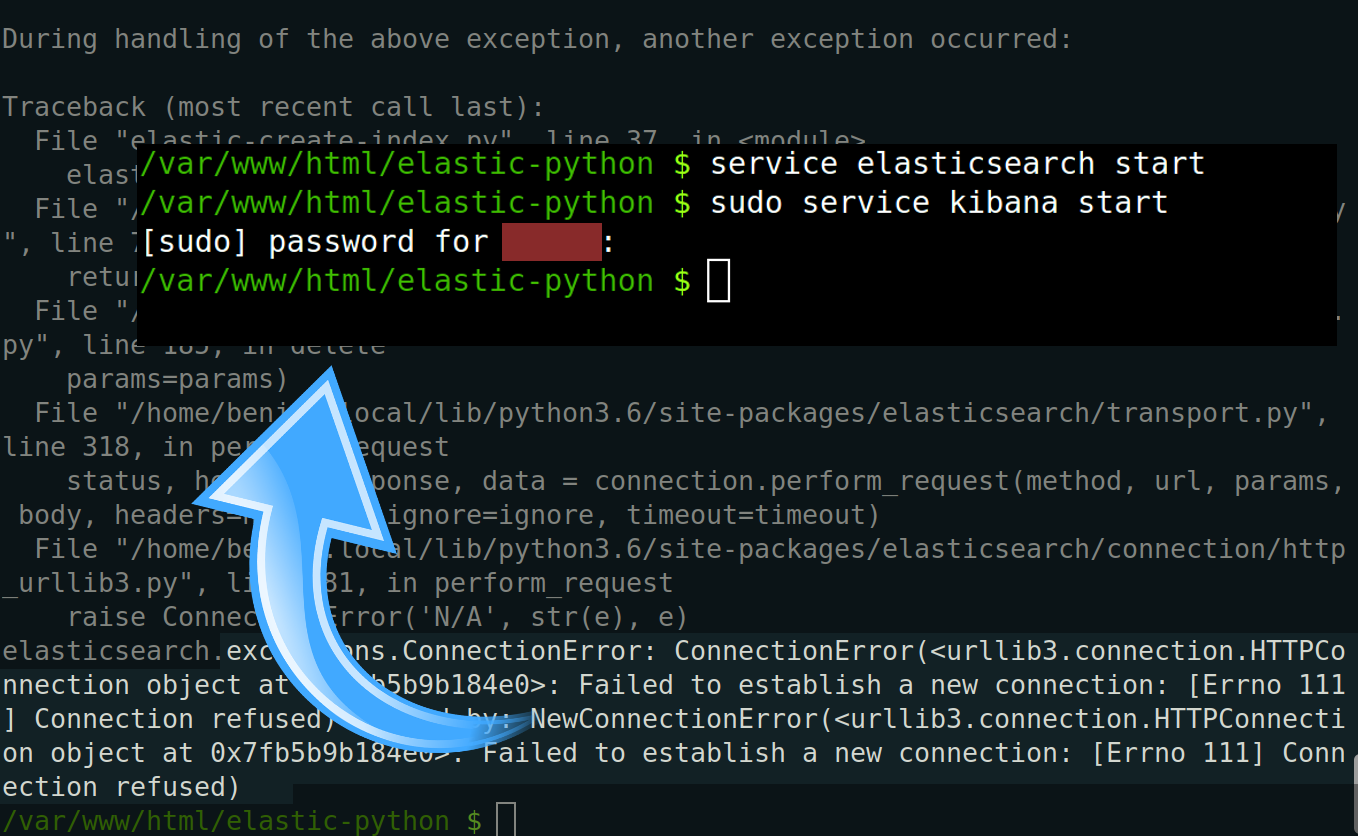 Use the hosts parameter with your port, IP address or server name. This should correct any client instance issues.

Another way to check the Elasticsearch service hasn’t stopped is to use Python’s requests library.

Verify that your Python version is compatible with your Elasticsearch client. That’s the only way the script will work correctly.

Check that you have the correct Python package pip installation version for the client library:

It’s good to know: Python 2.x requires the installation command of either pip or python. The only way Python 3.x will work is if you use pip3 or Python3.

The 404 Not-Found Error message displays when you try to delete an index that isn’t there.

Set the value of the integer at 404 (without quotes) with the ignore option to workaround the error.

If you try to create an index name (indices.create) that has already been created, the RequestError(400,'resource_already_exists_exception)' will appear.

Here’s the workaround is to pass an ignore option.

>ALERT: The ignore erases existing data and replaces it with what you create.

Save Time and Catch Multiple Errors

You can save time in troubleshooting. Pass the integers list so that the API call will overlook many HTTP errors as opposed to overlooking a single integer for an HTTP error.

Check that the iteration was completed and the creation of a new index occured. Use the Elasticsearch’s Kibana Console to make the GET request.

Here’s the GET request using cURL:

The troubleshooting, solving, and workaround examples shown in this tutorial are for instructional purposes only. It’s not recommended to delete clusters as a habit without giving it much thought prior to doing so. Keep in mind, once a cluster is deleted, that means that the existing data in that cluster is gone forever. Just be sure that the data you’re about to delete is something you don’t need.

Before we go, after we ran the code, indexes (user-created) and the .kibana index (hidden) were inadvertently deleted. Things like this can occur. We just restarted the Kibana service and all is well.

The image below shows restarting the Kibana service. 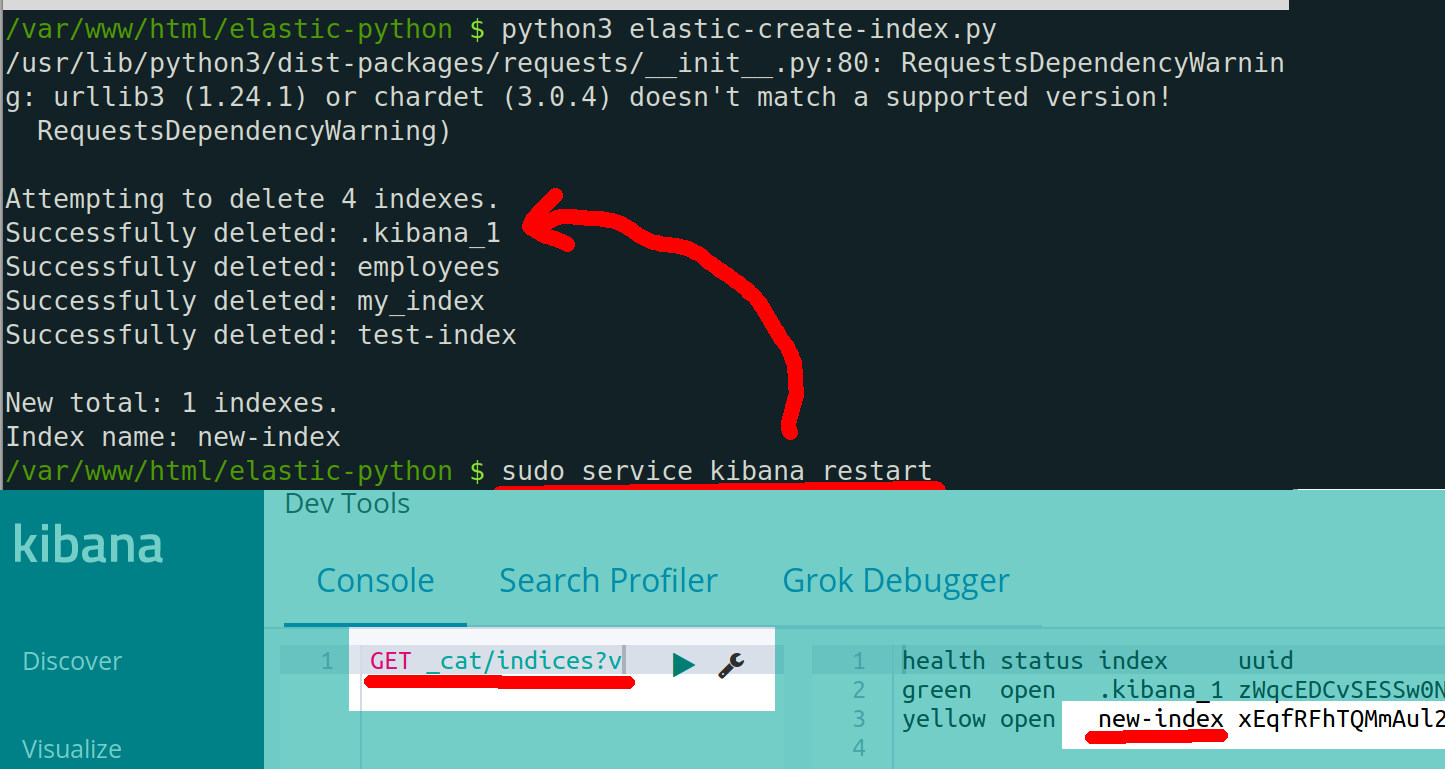 You can avoid deleting the kibana index with the following code:

Here’s the ending result showing a successful restart of the Kibana service.