How to Create a Python Class Designed to Construct Elasticsearch Documents

Written by Data Pilot
August 13, 2019
Subscribe
Like
Have a Database Problem? Speak with an Expert for Free
Get Started >>

This tutorial will explain how to create a Python class construct for Elasticsearch documents. All variables and pieces of data are fundamentally “objects” in Python programming language. As all objects have attributes and properties, having a solid understanding of the OOP, or Object-Oriented programming, concept is essential to learning the Python fundamentals. Creating a class for the Elasticsearch documents aids in writing cleaner code and incorporates the OOP principles of encapsulation and inheritance. This tutorial will cover how to construct a simple Python class that will help users construct Elasticsearch JSON documents in a simple and reliable manner using Python object-oriented conventions.

Prerequisites for Creating a Python Class Construct for Elasticsearch Documents

Typically, the pip3 command is used by default. However, the library can also be installed from the APT repository on most versions of Debian and Ubuntu with the following command:

The Python class constructor in this tutorial uses Python’s native JSON library. Import JSON and the Elasticsearch class with the following script:

How to create a client instance of the Python Elasticsearch library

Execute the following command to declare a client instance of the Elasticsearch client library, making sure to change the URL string to match the current cluster and domain settings:

How to declare a global string for the Elasticsearch index name

Declare a string for the index name, as shown below, outside of any functions or class constructors so it will have a global scope:

This will allow the variable to make API calls and be passed to the document instances.

How to Construct a Class for Elasticsearch Documents in Python

Use Python’s class keyword to declare a class constructor for the Elasticsearch documents by executing the below script. Make sure to include all the necessary variables that must be passed as parameters to the initializer (__init__) list.

The following script executes a dictionary constructor that allows the user to quickly build the appropriate name/value pairs for an Elasticsearch JSON document:

As shown in the following screenshot, this example uses a try-except block to catch any errors that may arise. This is designed to both catch malformed data that may attempt to pass to the "_source" field and also log any errors. 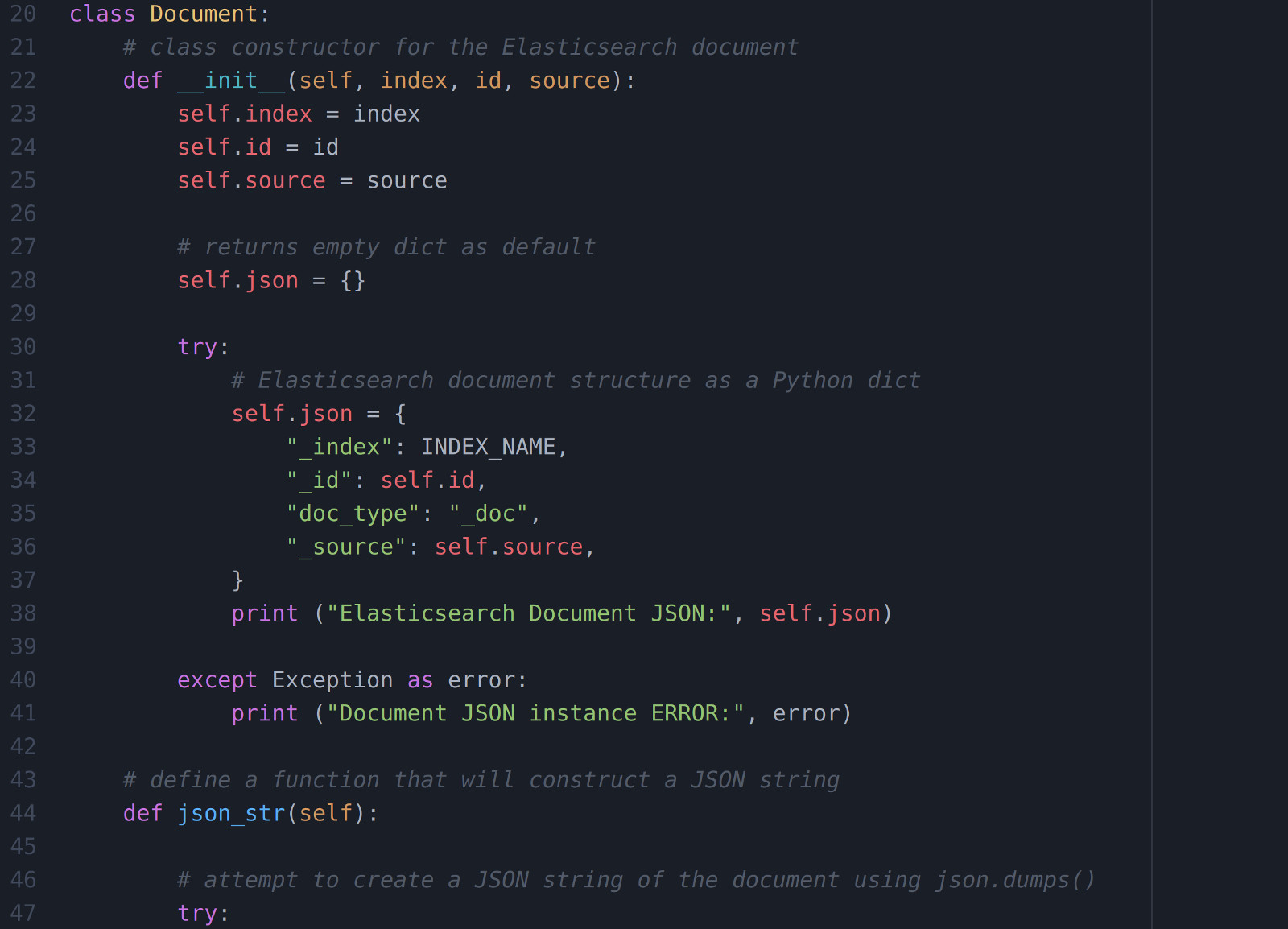 Use Python’s def keyword to declare a method for the Document class. This will take the Elasticsearch JSON document, declared above, and return it as a JSON string that can then be passed to the Elasticsearch low-level client’s API calls as shown in the following script:

This method will also catch any errors that may arise while calling the JSON library’s dumps() method and return an empty dict string in such cases.

Use the indent parameter comand to add spaces in the JSON string so it is more easily understood. Note that the number of spaces given each indentation is the integer value.

Many instances of the Document class can be declared and used to index Elasticsearch documents. The following code is an example that utilizes Python’s random library to generate some test data for the document instances:

Execute the following script to declare an instance of the Document class. Use the class’s json_str() method to have it return a string of the document’s _source data that can then be passed to the low-level client instance’s index() method to index the document instance to the index name specified earlier:

The Elasticsearch cluster should return a dict response showing what occurred with the API call. The response’s 'result' key will indicate if the document was sucessfully indexed or updated:

Navigate to the directory containing the Python script and run it using the python3 command. An output of the document instances and the API call response from Elasticsearch should be visible in the window. The results should resemble the following: 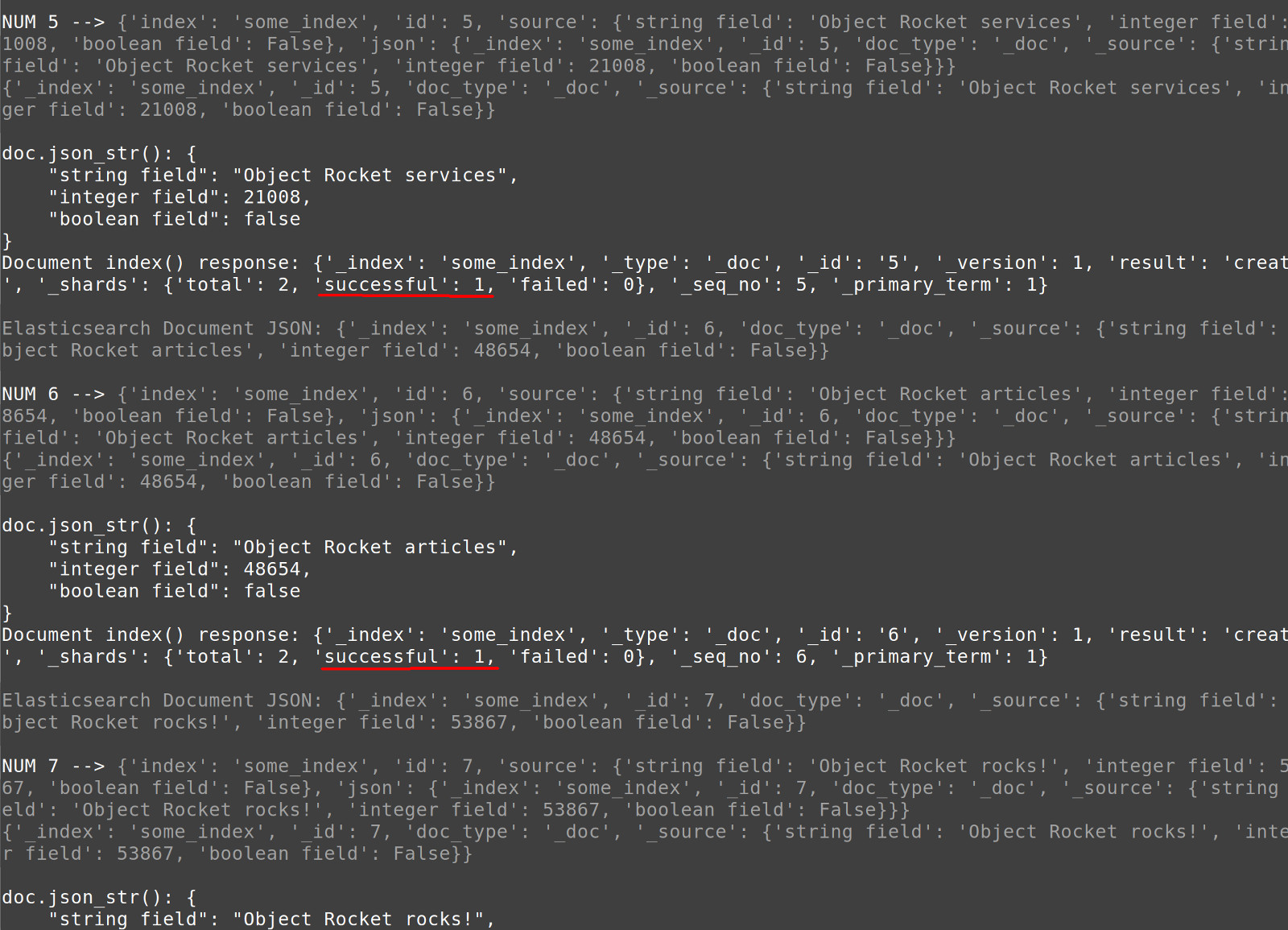 How to search the documents indexed into Elasticsearch using Kibana

Make a GET HTTP request to the Elasticsearch cluster to verify that the documents were indexed properly. This can be done in the Kibana Console UI by navigating to “Dev Tools” and making the following request: 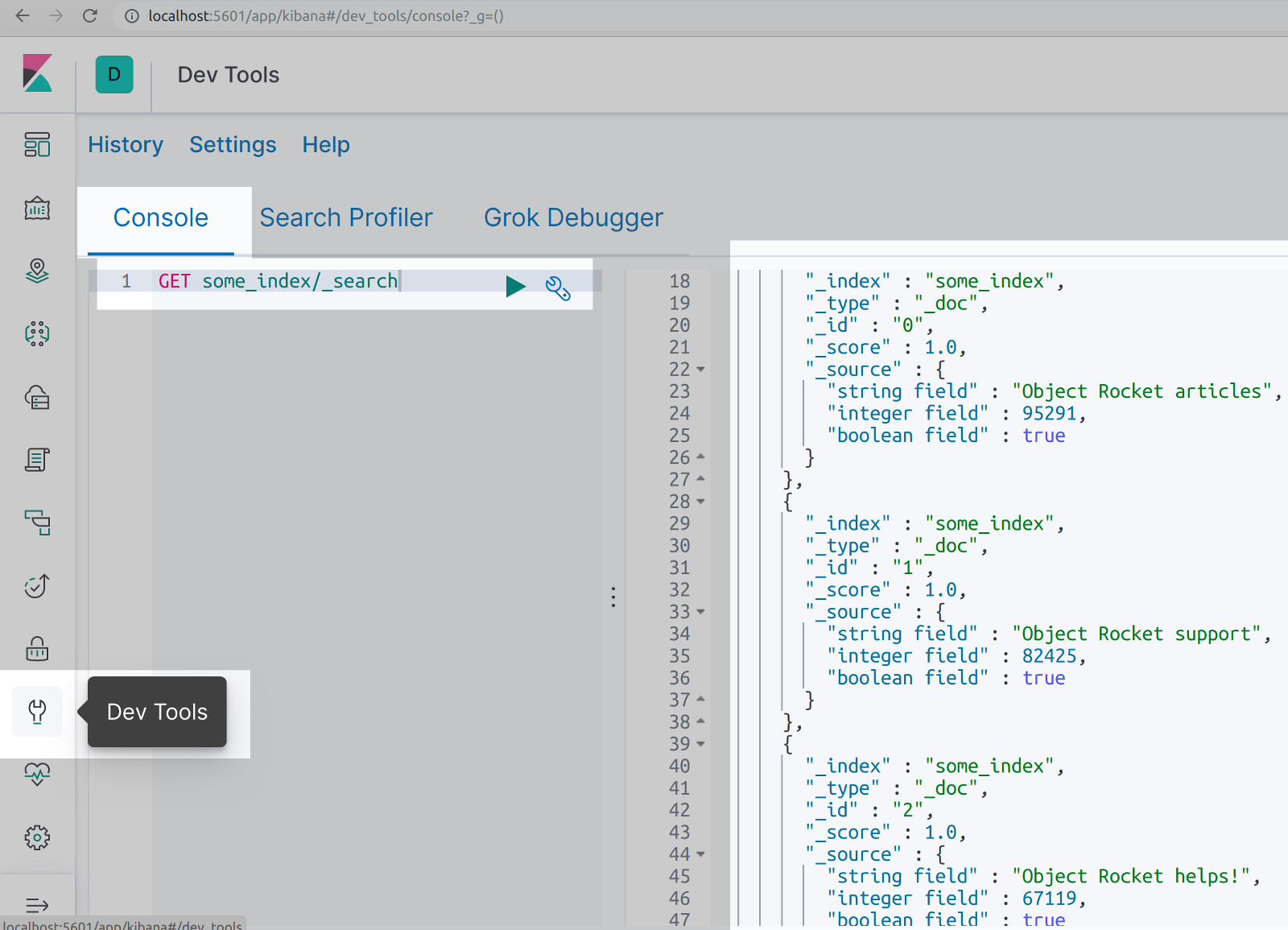