How to Configure the YAML File for Elasticsearch

The Elasticsearch service is a powerful tool for collecting and monitoring data with its available plugin tools. The YAML file is used for the configuration of this service created by Elastic. By manipulating variables with this file it becomes possible to set certain parameters that are required for various tasks that may need modified terms. As the need for changes to the system arises, this file will make scaling the service up much more efficient.

For most use cases the default configuration should suffice, however Elasticsearch is designed to be horizontally scalable, and, as such, will occasionally need to be “tweaked” for better performance as the size of the database grows, and as users shard indexes and assign shards to nodes. Most websites, that expect only nominal to normal growth rate in web traffic, will probably not need to have the default configuration settings for Elasticsearch changed too much.

The main configuration file for Elasticsearch is the elasticsearch.yml file. Typically it’s located in the /etc/elasticsearch directory on Linux, but the method used to install it may affect the default installation location. For example, was the Elastic Stack installed on Linux using the apt-get or yum package manager? Are the Elastic services running as a service from a folder that was unzipped from an archive? The location for theses configuration files all depend on how the Elastic Stack services were installed and started.

Elasticsearch is built using Java and requires at least JDK 8 in order to run (Only Elasticsearch 7.x and newer has complete support for JDK 9). The JDK can be downloaded from their website. For more about this, consult Oracle’s Installation Guide.

The entire Elastic Stack can be configured using each product’s respective YAML Ain’t Markup Language file (Configuring the Elasticsearch logging requires you to make changes to the logging.yml file). Elastic’s online documentation for the configuration file hasn’t changed much since version 2.x. If you have any questions, or things you’re unsure of, there is an online Elastic community that offers support and guidance as well as help with specific technical issues. 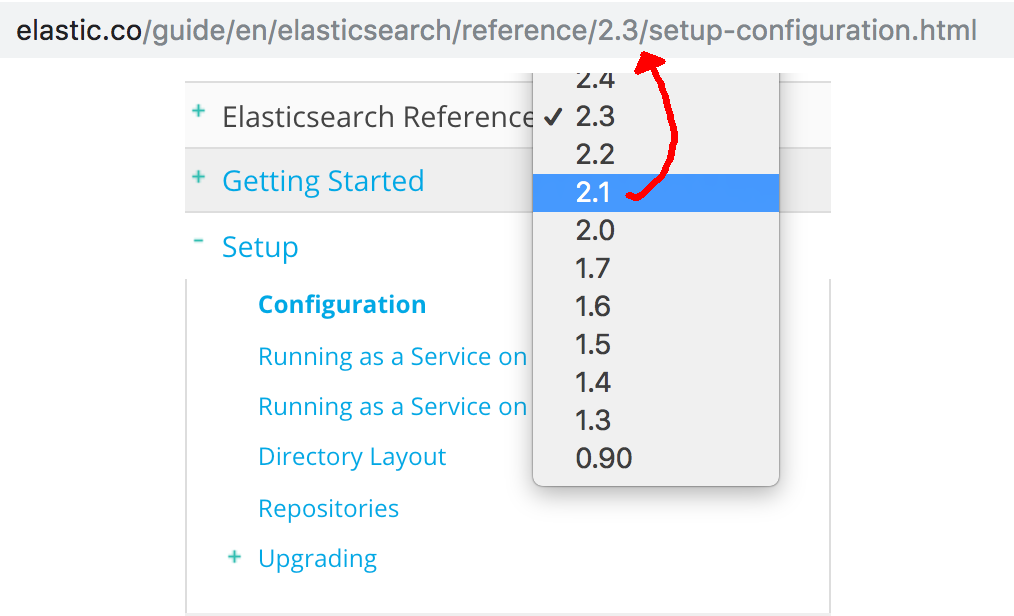 > NOTE: Make sure to select the correct reference version number for your installed version of Elasticsearch on the right-hand side when you’re looking at Elastic’s documentation website.

Get a copy of the master configuration file in Elastic’s official git repository.

Most of the default YAML values can be changed by uncommenting the line (removing the hash “#”), and changing the default value, but some of the values will not be commented out beforehand.

You can set the cluster.name and node.name by removing the hash and modifying the values.

Modify where data is stored

Typically you shouldn’t have to change the path.data field. This is where all the indexes and their respective document are stored. The typical directory hierarchy will look something like this:

The bootstrap.memory_lock field is a sensitive value. Java and Elasticsearch can be very memory “hungry”, and Elastic recommends that you allocate at least half of your server or machine’s RAM to the the JVM’s heap size. There are other jvm.options, not found in this configuration file, that can tweak things like the min and max heap size. Take a look at Elastic’s documentation on heap size for more information.

Change the default IP and port address (9200) for the Elasticsearch service.

Change the host for the discovery module. This feature of Elasticsearch helps the host to find nodes on a cluster. The default host IP address is your standard "127.0.0.1".

The Gateway Module stores a cluster’s meta data on its indices their explicit mappings. This modules helps nodes communicate with each other, and the setting in this file allows you to select how many nodes have to start before a cluster recovery will initiate.

The action.destructive_requires_name value is a boolean, set to true by default, that will restrict any non-explicit destruction of an index. It’s probably a good idea to leave this true so that no indices are unintentionally deleted during a “wildcard” iteration of the indices, or request with only a partial string match of the index name.