If you’re storing documents in Elasticsearch, it’s important to know how to index large numbers of documents at a time. Fortunately, it’s easy to accomplish this task using the Bulk() API method to index Elasticsearch documents with the help of the Olivere Golang driver. In this article, we’ll provide step-by-step instructions for performing a bulk index in Elasticsearch with Golang.

Before we check out the code we’ll need to perform our bulk index, let’s take a moment to review the essential prerequisites for this task:

If Elasticsearch is not installed, Go will try to find it and install it, and you’ll see a terminal response like the following:

Now that we’ve covered all the necessary prerequisites, let’s go ahead and create a new Golang script with a .go extension. We’ll import the necessary packages for the API calls to Elasticsearch and declare package main at the top of the script:

You can use either the latest default package version ( "github.com/olivere/elastic" ), or you can specify a particular version of the Olivere package driver.

Declare a struct type collection of fields for the Elasticsearch documents

Next, let’s create a new struct type that will represent the document fields of the Elasticsearch index. Please note that the struct field names used in this example will overwrite the index’s _mapping schema:

Declare the main() function and connect to Elasticsearch

We’ll need to declare the main() function for all of the code and API calls to Elasticsearch, and we’ll use the Olivere package to declare a new client instance for the Bulk API calls that are used to index documents:

Check if Elasticsearch returned any HTTP errors while Golang was connecting

It’s important to use the log.Fatalf() function call in our code; this function will quit the script if any errors were returned by Elasticsearch while attempting to connect and instantiate a client:

If the connection to Elasticsearch was successful, we can declare the index’s name as a string and pass it to a string slice ( []string ). This will allow us to call the NewIndicesExistsService() method’s Do() method to find out if the index name exists:

The IndicesExistsService returns a boolean indicating if the Elasticsearch index exists

If any errors were returned, or if the API response returned a value of false , then the script will not proceed to perform the bulk index in Elasticsearch:

Use cURL to create the index if needed

Creating the index, if it doesn’t already exist, is a simple task. Shown below is an example cURL request that can be used for creating an index. Just paste this request into a terminal window, making sure to change the domain, port, index name, and "settings" values as needed:

If the index in question does exist, however, you can go ahead and declare any empty slice that will be used to contain the Elasticsearch documents struct instances. You can also create some documents by passing some values to the struct’s fields during declaration:

Append the Elasticsearch document structs to the Golang slice

We’ll use the append() function to add the Elasticsearch struct documents to our docs slice:

The Elasticsearch API call will be made using the client.Bulk() library. This library allows you to perform a bulk index in Elasticsearch with Golang:

Declare an integer value for the Elasticsearch document’s _id

If you’d like to specify an _id for the Elasticsearch documents, then you’ll need to pass a string value to the NewBulkIndexRequest() instance’s Id() method later on. Without this value, Elasticsearch will dynamically generate an alpha-numeric ID for the document automatically:

Iterate over the Golang struct documents and create a timestamp

Next, we’ll use Golang’s for keyword to iterate over the struct documents stored on the slice, and we’ll use range to figure out the length of the iteration:

Instantiate a NewBulkIndexRequest() object and pass the document’s values to the object’s Doc() method. Make sure to set the OpType() as "index" if you’d like to have Golang return the API response:

Add the Golang index request to the bulk API object

Use the Add() method to add the request to the bulk object:

At this point, we’re ready to perform our bulk index operation. Pass a context object while calling the Bulk object’s Do() method and check if it returned any errors:

Iterate over the response returned by the Elasticsearch Bulk API

Now we’ll iterate over the response that was returned from the API call:

Run the Golang script to bulk index the Elasticsearch documents

We’ve finished creating our Golang script– now it’s time to run it. Navigate to the directory with the Golang script in a terminal window and use the command go run SCRIPT_NAME.go . The script should return a response similar to the following: 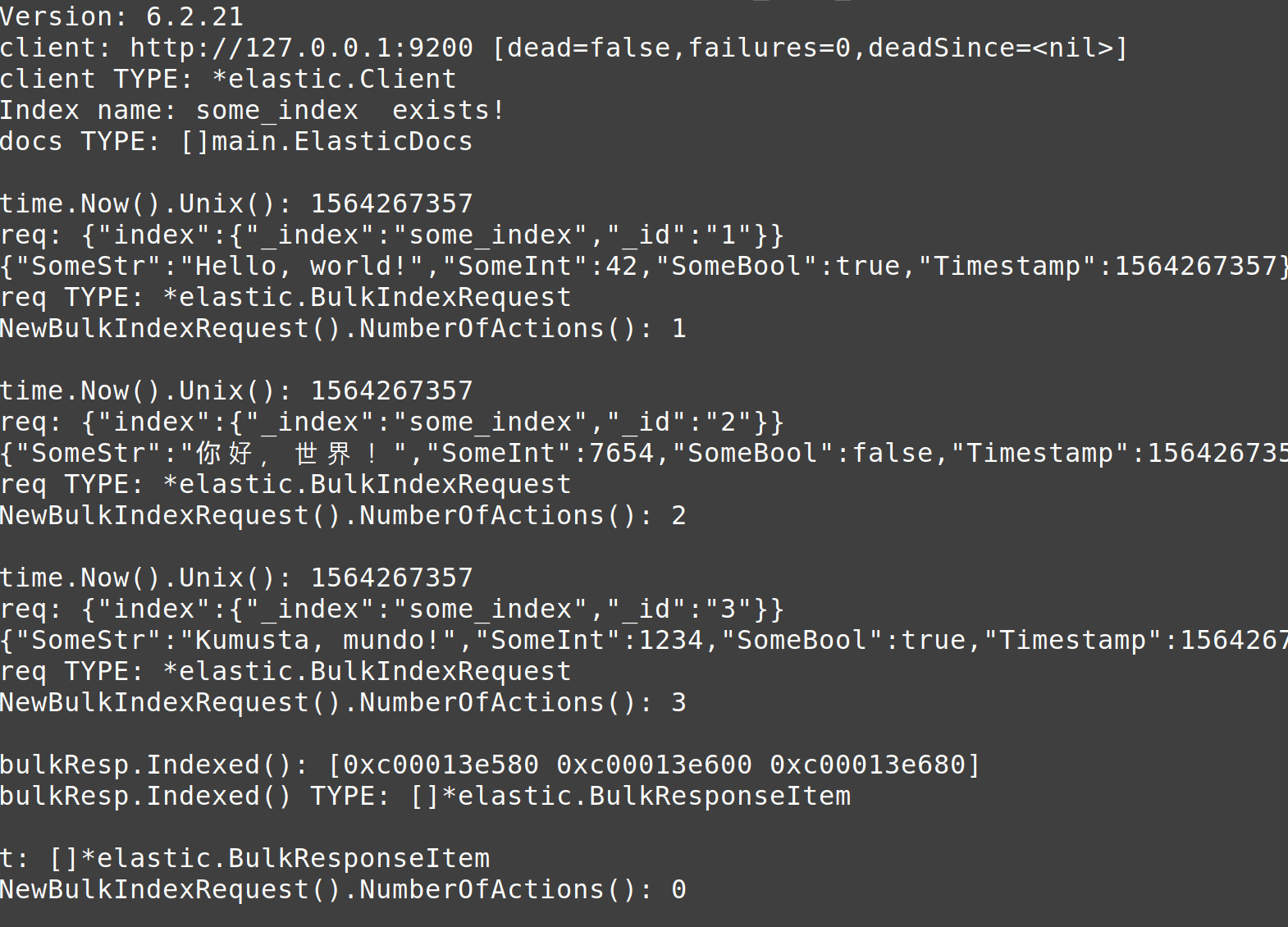 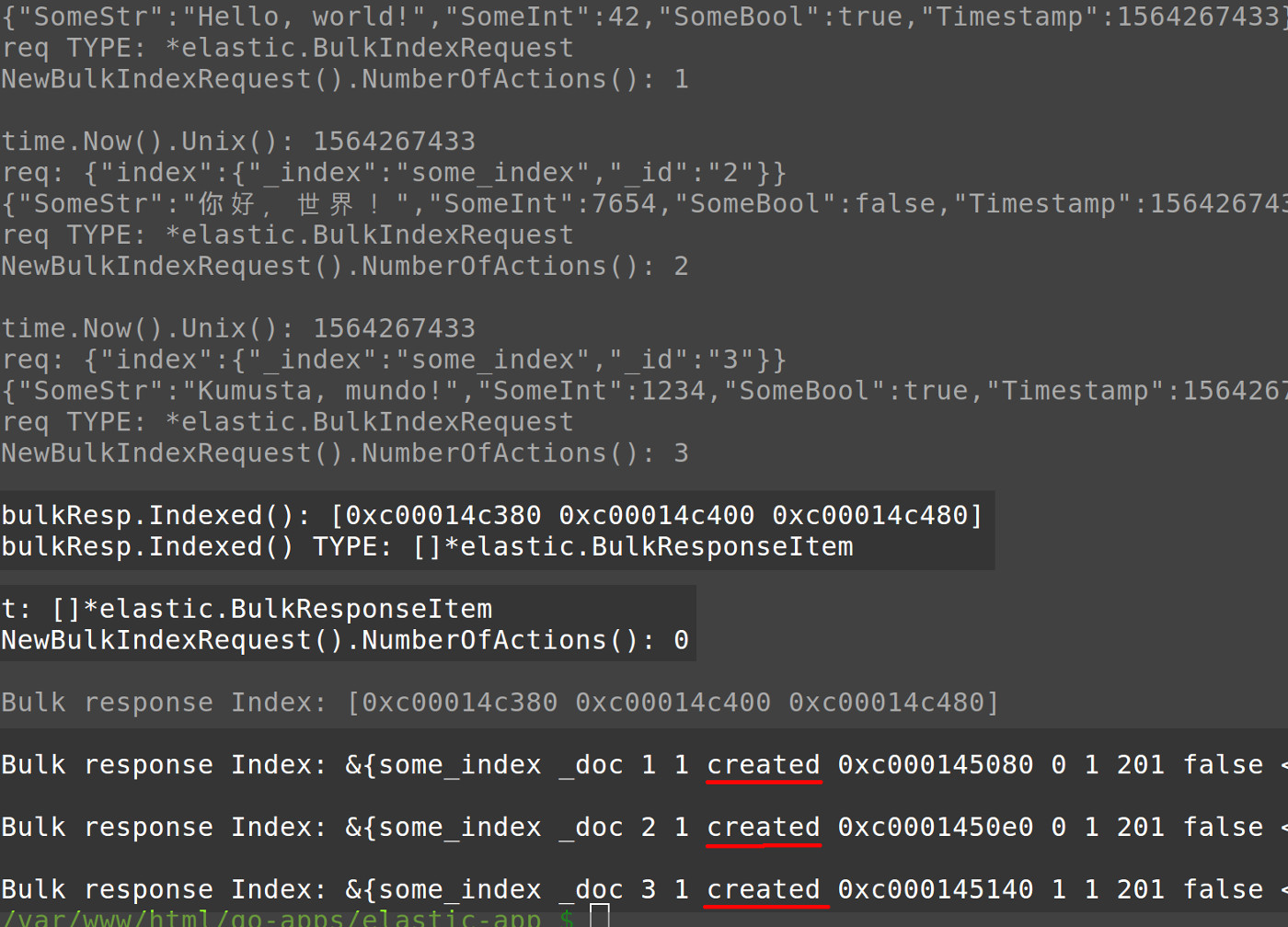 Once you’ve run your script, it’s a good idea to verify that the documents were successfully indexed. Simply navigate to the Kibana port of your domain in a browser tab, then go the Dev Tools section and click on Console to make the following HTTP request: 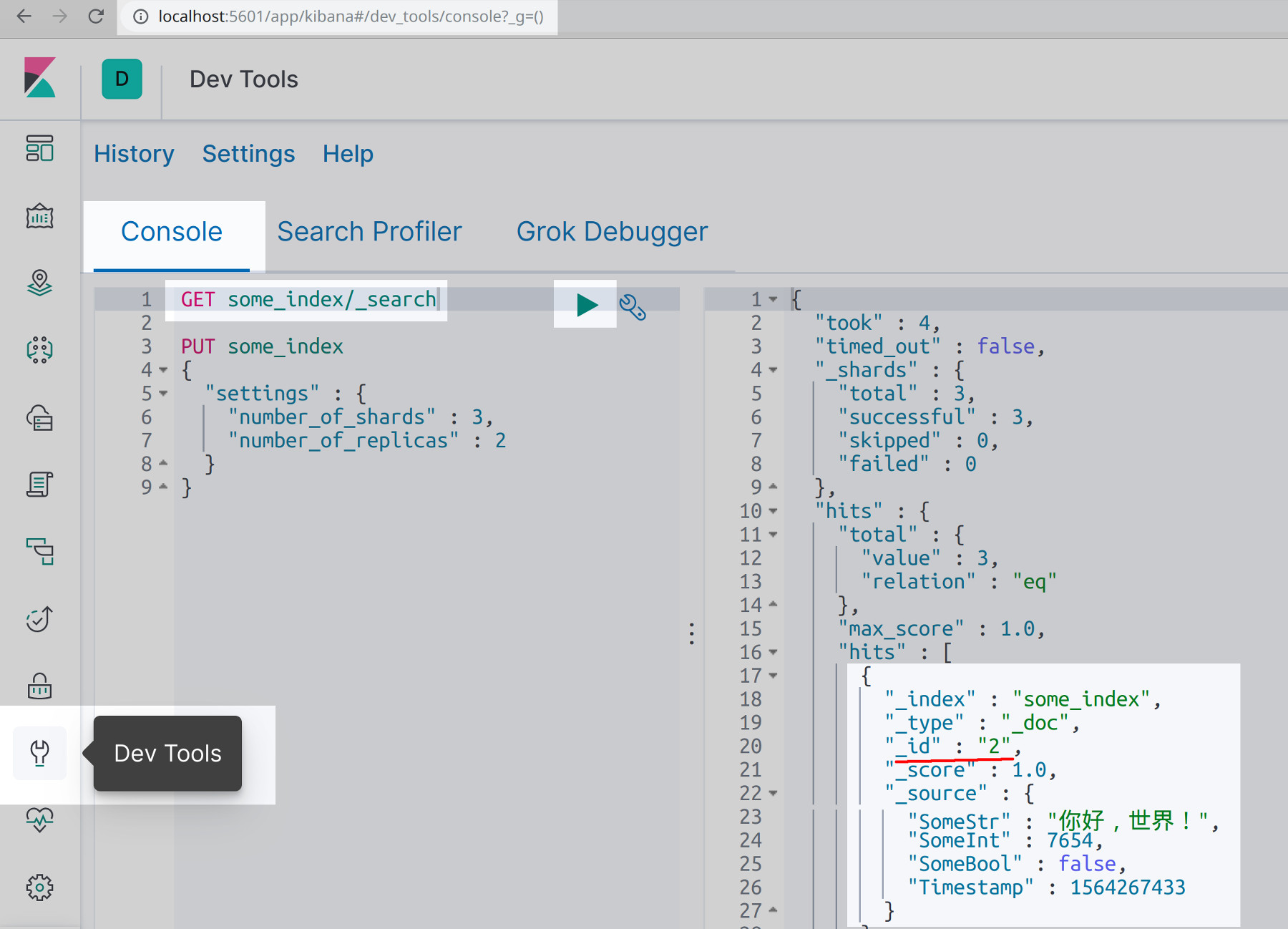 Shown below is the bulk-indexing script in its entirety: