When you’re managing data in Elasticsearch, it’s important to know how to bulk index documents in an efficient manner. This article will explain how to bulk index Elasticsearch documents from a JSON file using Python. The Python script will index the data as Elasticsearch documents with the help of the Python client library and Python’s built-in json library. This process is a simple and efficient one because Python has native JSON support built into its language. The Python dict object can easily be converted to a JSON string using its dumps() method.

Before we dive into the code, let’s review a few prerequisites that must be in place in order to bulk index Elasticsearch documents from a JSON file using Python:

Create a JSON file with documents to be indexed to Elasticsearch

Now that we’ve discussed the prerequisites, we can go ahead and create a new JSON file with the .json file extension. We’ll be adding some documents with fields to be indexed in Elasticsearch. You can use the touch command in a terminal window to create your JSON file:

Let’s edit the file and make sure that all of the documents have the same field types; this will prevent Elasticsearch from raising a _mapping exception. For this tutorial, we’ll use the following documents as examples:

NOTE: The JSON file must be in the same directory as the Python script that’s making the Bulk API call to Elasticsearch. If it’s in a different directory, you must specify the relative path to the JSON file when using the open() command in Python.

Next, we’ll create a new Python script in the same directory as our JSON file using the command touch bulk_index.py. Let’s make sure to import the package libraries for JSON, as well as the Elasticsearch and helpers method libraries, at the beginning of the script:

NOTE: In this script, we’ll be using the datetime.now() method call to create a timestamp for the Elasticsearch documents.

Declare a client instance of the Elasticsearch low-level library

The next step is to pass a string to the Elasticsearch() method call. When you follow along with this example, be sure to replace the default values with your cluster’s host name and the port that Elasticsearch is running on:

NOTE: The default port for Elasticsearch is 9200, but this can be configured in your server’s elasticsearch.yml file.

Open the JSON data and return a list of Elasticsearch documents

In this next bit of code, we declare a function that will open the JSON file’s data and return a list of JSON object strings that can be indexed as Elasticsearch documents:

NOTE: Be sure to pass the relative path to the .json file in the string argument as well if the file is not located in the same directory as the Python script.

Let’s create an empty list object ([]) that will hold the dict documents created from the JSON strings in the .json file. After the list declaration, we use enumerate() and iterate over the list of strings returned from the JSON file:

Avoid getting a ‘JSONDecodeError’ by making Boolean values lowercase

It’s important to make any Python Boolean values lowercase before the string is passed to the json.loads() method call; otherwise, Python will return a JSONDecodeError exception.

This can be done using the Python string’s built-in replace() method call: 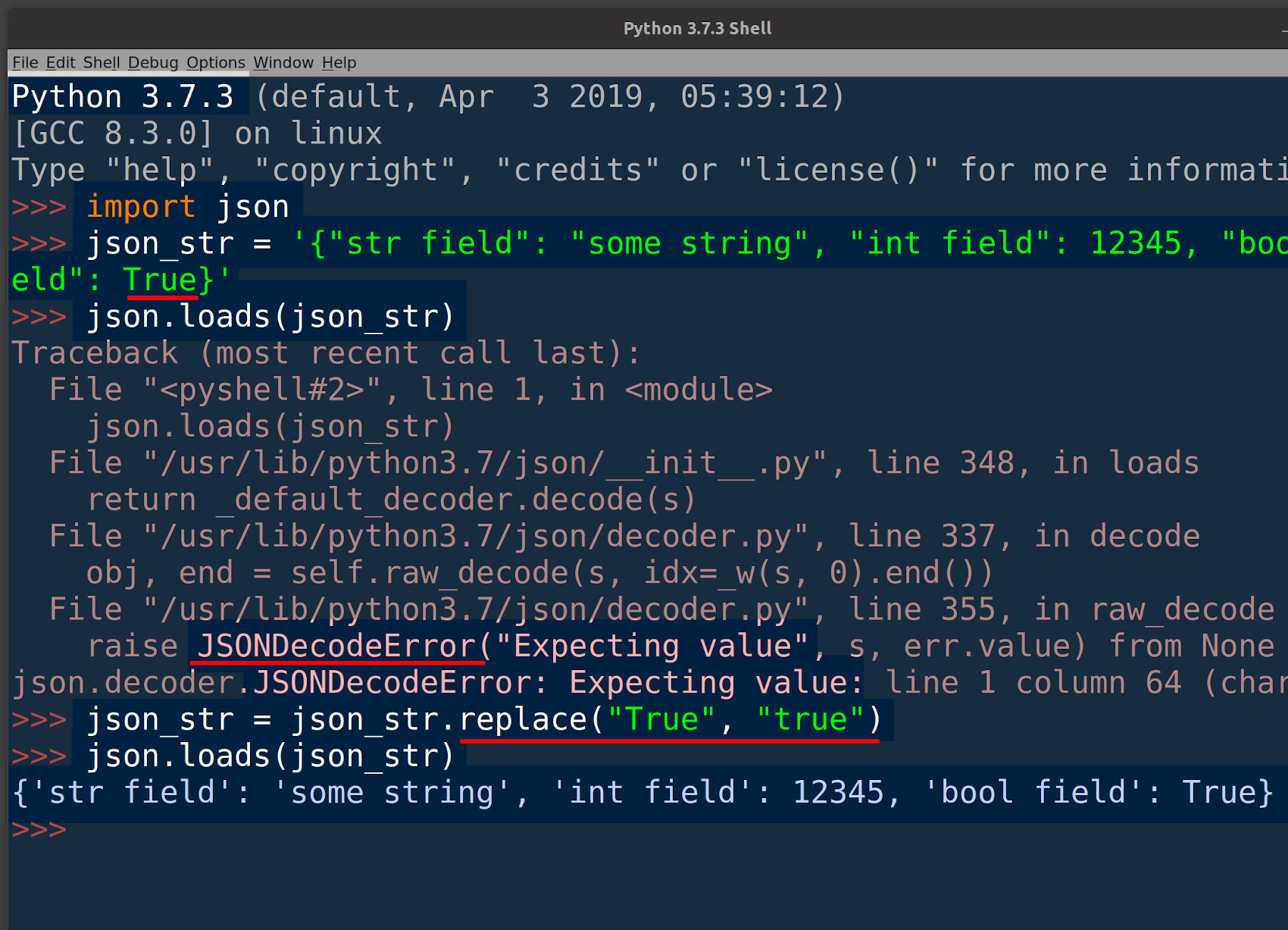 Pass the JSON string to the ‘json.loads()’ method call

In this section, we’ll pass the fixed JSON string to Python’s json.loads() method. It should return a dict object that will represent the Elasticsearch document:

It’s possible to add more fields to the document by assigning a value to a new key in the dictionary object. The following example assigns the documents a new field called "timestamp", and it uses the datetime.now() method call to generate the value for this field:

Create a custom _id for the Elasticsearch Python document

You don’t have to assign an "_id" value to the Elasticsearch document; however, Elasticsearch will generate a unique alpha-numeric _id for you if this value is omitted:

The enumerate() iterator function returns an integer, representing a tally of each iteration and the value. The following example uses that num value to create a number _id for each document. 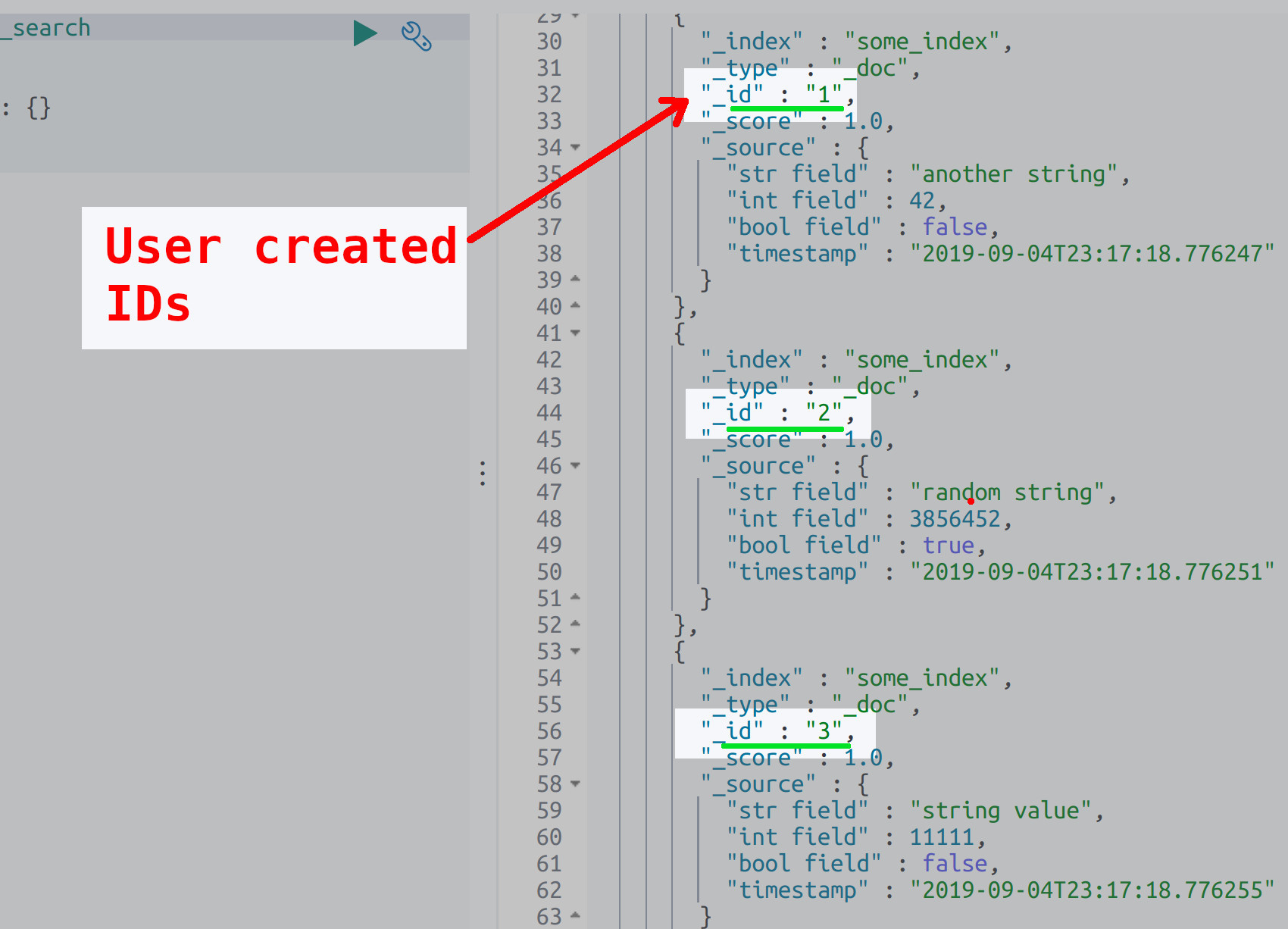 We use the += Python operator to append the dict JSON object to the list that will eventually be passed to the helpers.bulk() method:

NOTE: If there are any JSONDecodeError exceptions raised, then those documents will not be added to the list. You can print the length of the list object using len() to see how many documents were added.

Pass the list of Elasticsearch documents to the client’s helpers.bulk() method

In this section, we’ll pass the doc_list of Elasticsearch documents objects to the helpers.bulk() method. Make sure to pass the client instance and specify an index name when you call the method:

NOTE: The document’s doc_type parameter has been deprecated since Elasticsearch v6.0. Pass the "_doc" string as an argument instead if you’re using a newer version of Elasticsearch.

Print the API response returned by the Elasticsearch cluster

The try-catch indentation will exit the script if any errors occur. Otherwise, the method call should return a response indicating how many documents were indexed:

In the next bit of code, we’ll create a query filter that will return all of the documents in the Elasticsearch index:

NOTE: The default number of documents returned by the search() method is 10, and the maximum integer value you can pass to the size parameter is 10_000. Any value larger than 10,000 will return an error saying "Result window is too large, from + size must be less than or equal to: [10000]".

Make the script pause before searching for the documents

We can use Python’s time library to have our script “sleep” for a few seconds. This ensures that the Elasticsearch cluster has time to index the documents before another API call is made to return them with search():

Let’s call the Elasticsearch Python client instance’s search() method and have it return all of the documents:

NOTE: The documents will be nested inside the response object’s ['hits']['hits'] keys.

In this article, we’ve explained how to bulk index Elasticsearch documents from a JSON file using Python. We’ve completed our example script; now, all we need to do is run it. We can run the Python script using the python3 command:

The following output should be returned at the end of the script: 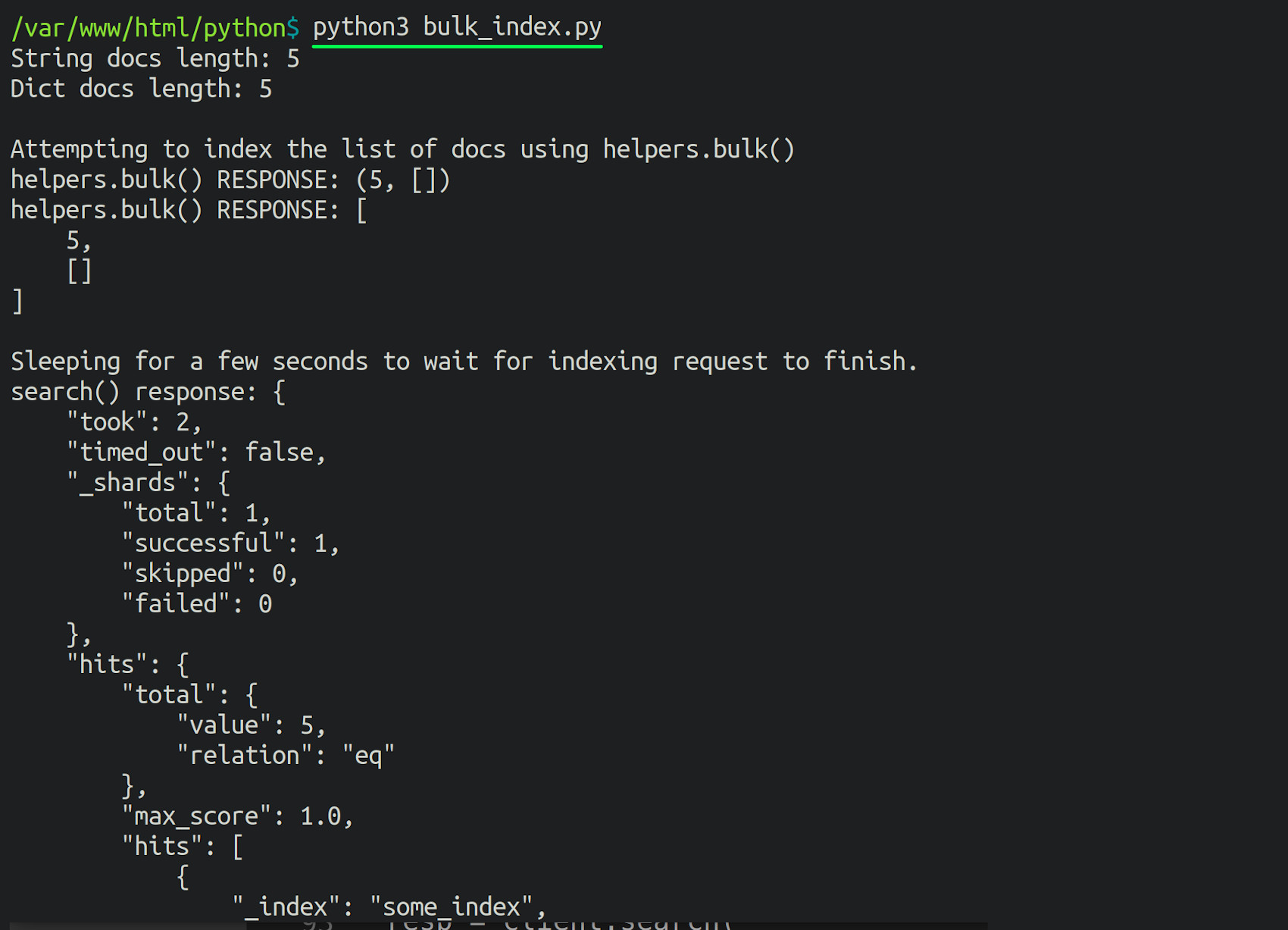 Use Kibana to get the Elasticsearch documents indexed using helpers.bulk()

You can also make an HTTP GET request within Kibana’s Console UI to get all of the documents you just indexed: Throughout our tutorial, we looked at the example code one section at a time. In this section, we’ve included the Python script in its entirety: