Written by Data Pilot
August 28, 2019
Subscribe
Like
Have a Database Problem? Speak with an Expert for Free
Get Started >>

A screenshot of the ObjectRocket example image used in this tutorial 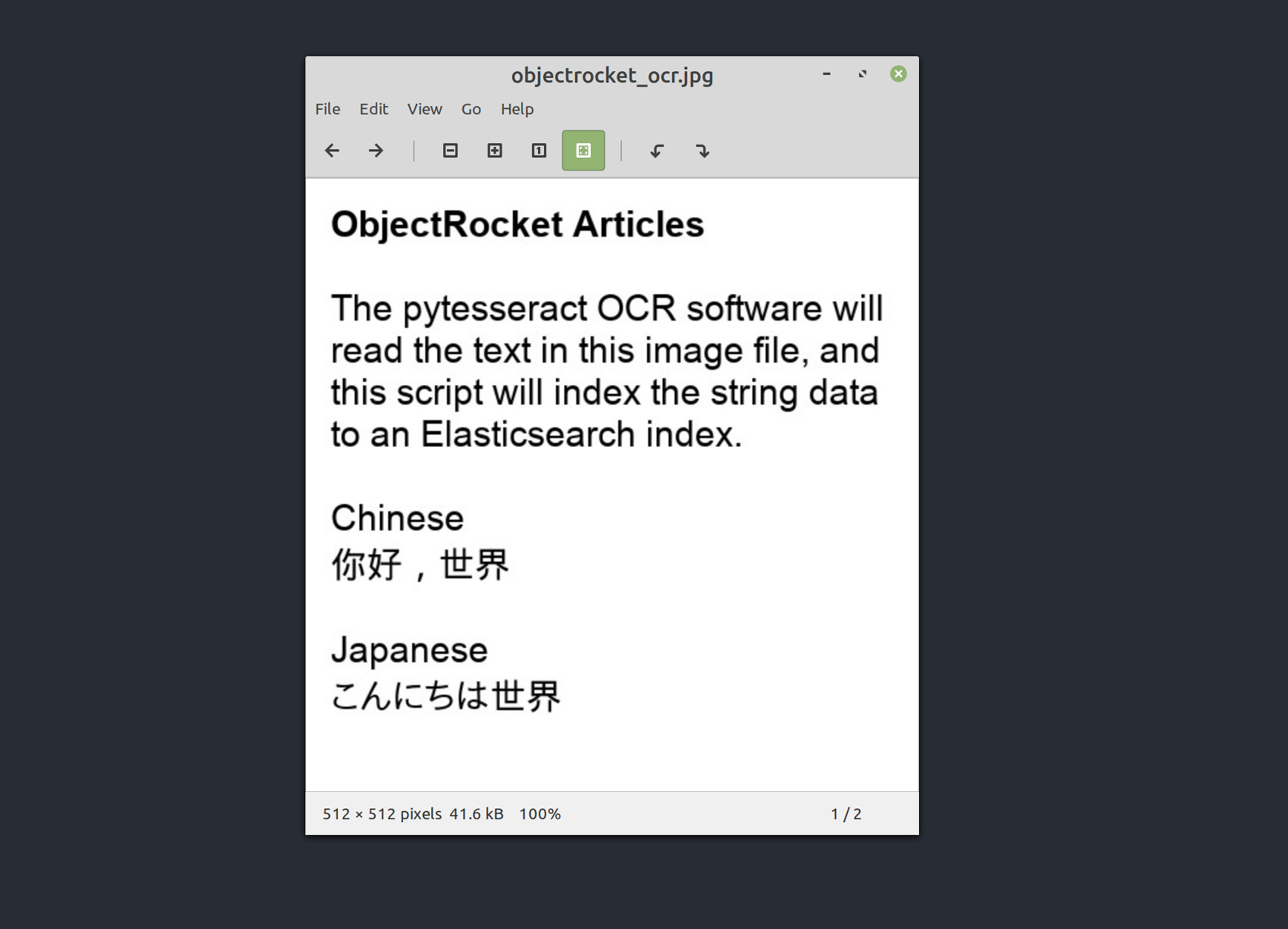 The image intentionally includes some Chinese and Japanese characters to demonstrate that Python 3, Elasticsearch and Tesseract all have multi-language Unicode support.

NOTE: The examples in this tutorial are executed using Python 3. The code examples used here have not been tested with Python 2. The next section supplies instructions for installing the Tesseract software.

How to specify the OCR installation location for PyTesseract on Windows

If using Windows to run the example Python code in this article, then download the executable installer for Windows.

If using a Debian-based distro of Linux, such as Debian, Linux Mint, or Ubuntu, execute the following command to install the Tesseract dependencies for using the APT-GET repository:

Then use the APT repository to install the Tesseract OCR library:

How to install the Tesseract library on macOS using Homebrew

To run this Python script in macOS, use the following Homebrew brew command to install the Tesseract library and language support:

Following is a screenshot showing the before and after configurations: 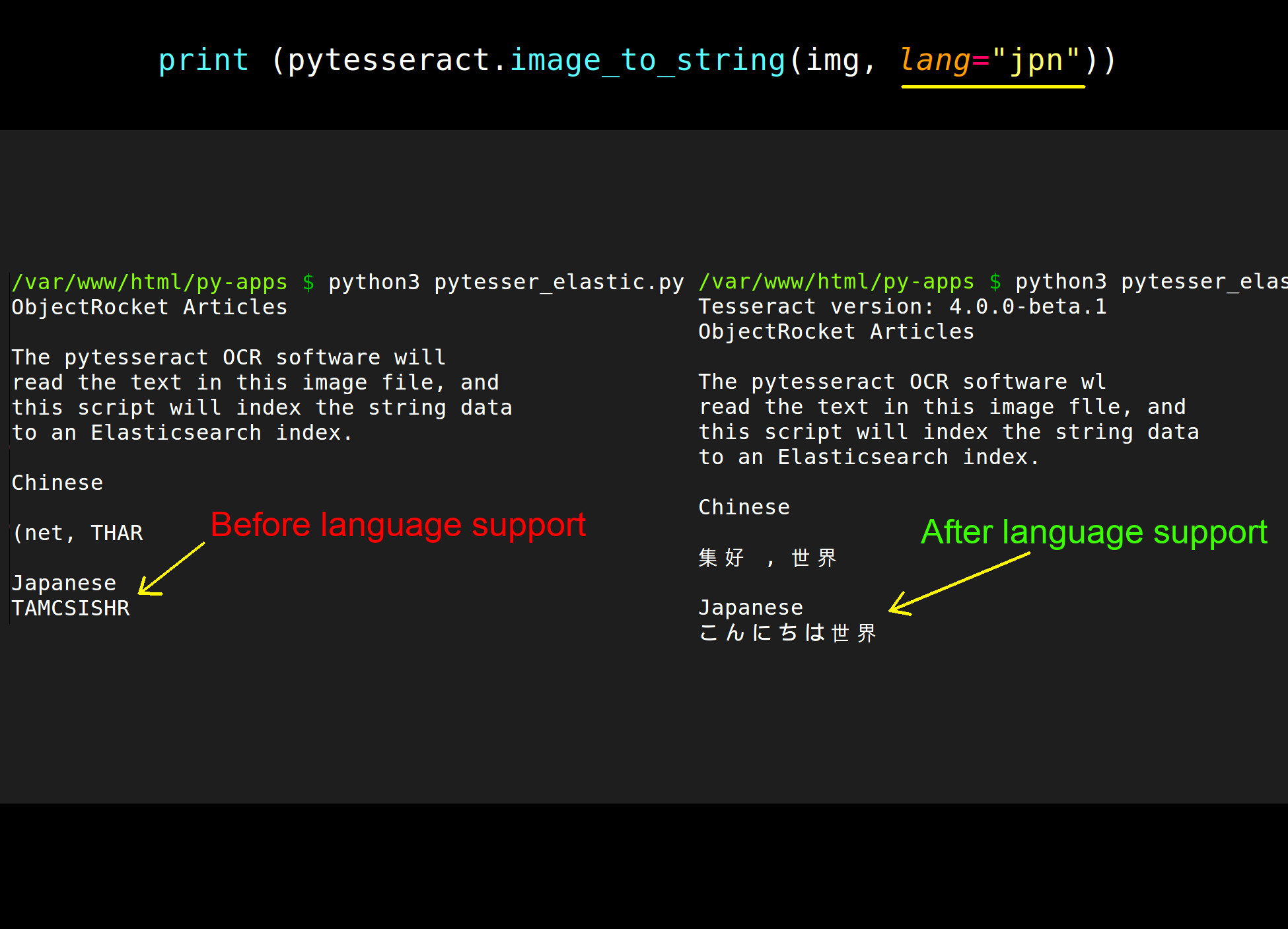 NOTE: Calling the image_to_string() method, with Japanese language support specified in the method call, will likely produce accurate OCR results. This is true even if some of the source text is in both Chinese and Japanese. This is because the Japanese “Kanji” writing system borrowed many of its characters from Chinese. However, notice that the OCR reading of the image did misinterpret “will” as “wl” when using the Japanese language support in the method call.

Once inside the Python script, make sure to import the PyTesseract library and the PIL (Pillow) library for loading and reading image data. Use Python’s JSON library to parse the dictionary response returned by Elasticsearch so both are more readable when printed. Execute the follow script:

Call the PyTesseract library’s get_tesseract_version() method to verify the Tesseract package is installed on the machine running the Elasticsearch cluster:

Use the def keyword in Python used to define a new function that will take the image data and file name and then index both into an Elasticsearch document:

The default parameter for the function’s Elasticsearch document _id is an empty string (""). This will cause Elasticsearch to automatically create a dynamically generated alpha-numeric document ID for the user, provided none were passed to the function call.

to pass the data to the bytes() function and use UTF-8 character encoding:

Execute the folloing script to acquire the bytes string and encode it using the Base64 library’s b64encode() method:

To avoid the mapper_parsing_exception error when indexing to Elasticsearch, convert the string of data returned by PyTesseract to a Base64 encoded string before passing it to the Elasticsearch client’s index() method nested inside the document (Python dict) body.

How to Build an Elasticsearch Document from the Encoded OCR Data

Use the "file name” to record the image’s accompanying file name for the OCR data:

It is critical to pass the entire dict body to the index() method’s body parameter. The following example script uses the request_timeout parameter to instruct it to attempt the API call for two seconds before returning a timeout error:

The function will return the JSON response returned by Elasticsearch as a Python dictionary object. If an exception is raised, then the function is designed to instead return information about the error.

Use the following script to have the PIL library to return a PIL.JpegImagePlugin object of the image’s data that can then be passed to PyTesseract’s image_to_string() method call to return a string that will, hopefully, contain accurately transcribed text data from the image:

The above example passes the string "jpn" to the method’s lang parameter so the OCR software knows to look for Japanese writing in the image.

Call the index_ocr_data() function declared earlier and pass the image’s file name and OCR data to its function calls:

NOTE: The option exists to pass a document _id parameter to the function call, such as doc_id=42, to explicitly choose the document’s ID.

How to print the OCR function’s JSON response from Elasticsearch

Print the response returned by the function call:

At this point in the code the Base64 encoded OCR data, retrieved from the image, will have been indexed in Elasticsearch as a document’s _source data when the script is executed.

Navigate to the directory containing the Python script and execute the following code using the python3 command:

If the Kibana Console UI is installed and open in a browser tab, a GET HTTP request can be made to retrieve the Base64 encoded OCR data stored on the pytesseract_image_data Elasticsearch index. Execute the following GET command: 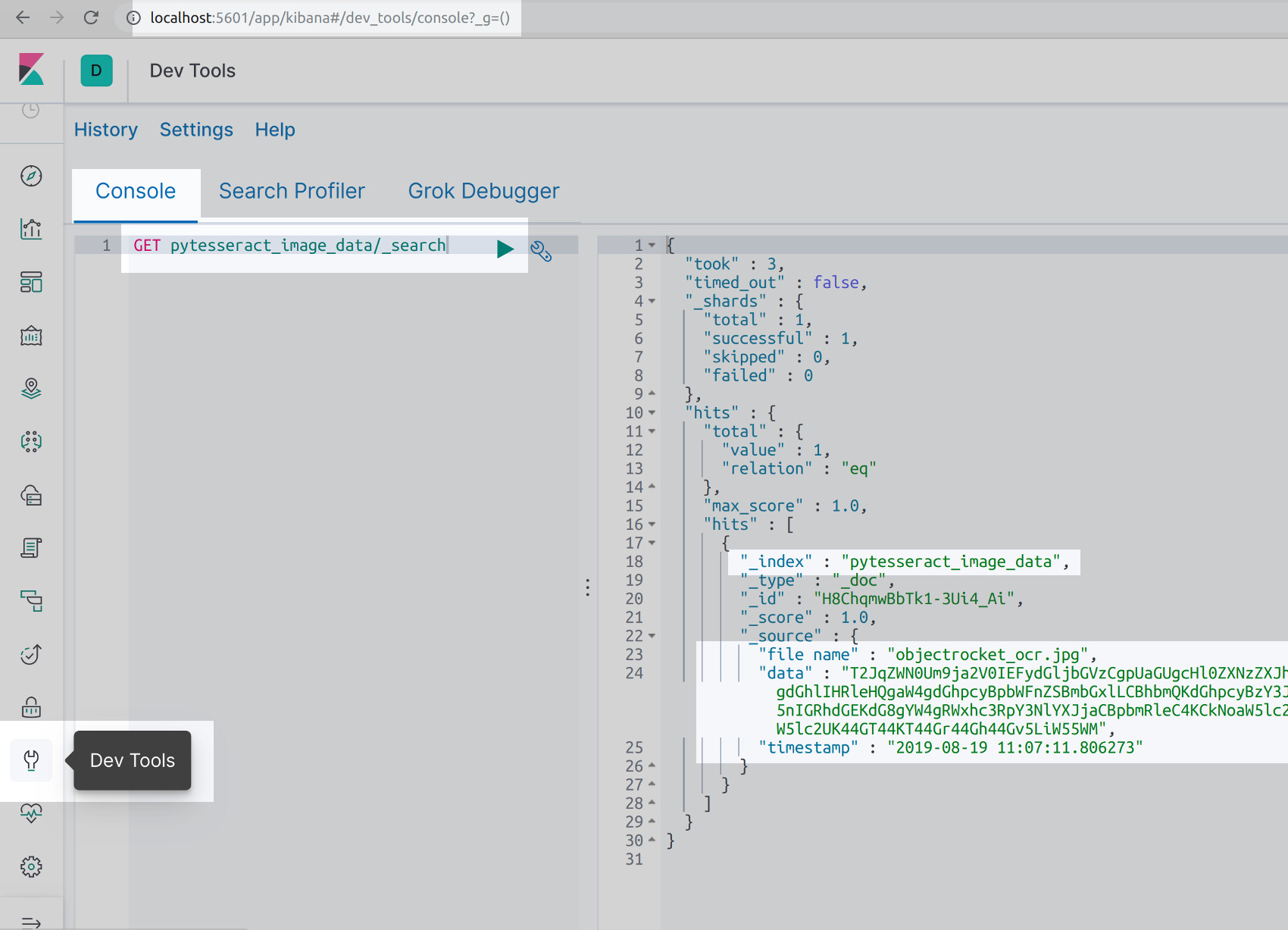 As shown in the above screenshot, the OCR data is an unreadable, encoded Base64 string. Another call must be made to Elasticsearch and the string decoded in order to read the indexed text from the image file. Alternatively, copy and paste the encoded string into another application to have it decoded.

After the OCR data has been indexed as an Elasticsearch document, the Python client’s get() method can be used to retrieve the Base64 encoded data. It can then be decode back into a string to verify the OCR image data was indexed and stored successfully. Execute the following script: 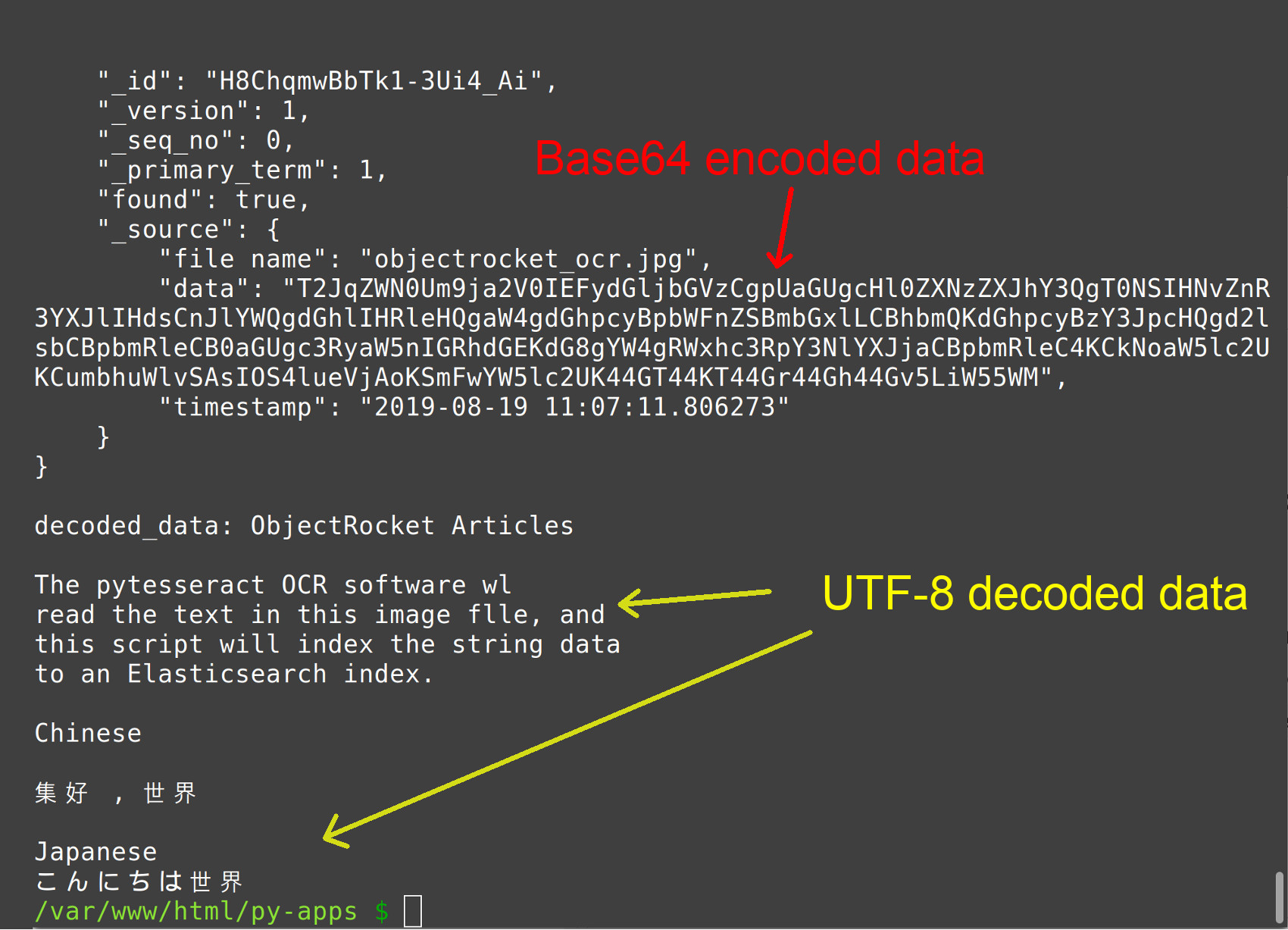