Import Elasticsearch and create an instance of the client

With the elasticsearch library installed our next step will be to import the Elasticsearch module and make sure that the 'host' key is set to localhost and port 9200, the default port for Elasticsearch. Let’s take a look at the Python code to do that.

Now we have an elastic_client variable that we’ll use to interact with Elasticsearch with.

Our connection with Elasticsearch exists in the elastic_client variable, and there is a tremendous amount of utility methods on this object like flush() or refresh() that will help maintain your indices. We’ll be using the dir() function which will retrieve all of the attributes of the Indices class. We use indices on the elastic_client variable to get our indices into a variable called indexes. Let’s take a look at the code:

To check if a specific index exists we can pass a index name (string) into the exists() method to check if it exists on the cluster. The function will return a True or False Python boolean depending on whether the index exists in the cluster. Let’s take a look at a code sample for checking if an index exists:

Get all of the indices on an Elasticsearch cluster using the ‘get_alias()’ method:

The client library’s Indices class has another utility method .get_alias() which returns a Python dictionary of all the indices with the index name as the key. We’ll execute this method and then print the result:

Our next step is to enumerate through the dictionary of indexes from the previous step and print them out using a for loop. Let’s take a look at the Python code snippet:

Getting all of the Elasticsearch indices on a cluster using the Python client library in an IDLE shell: 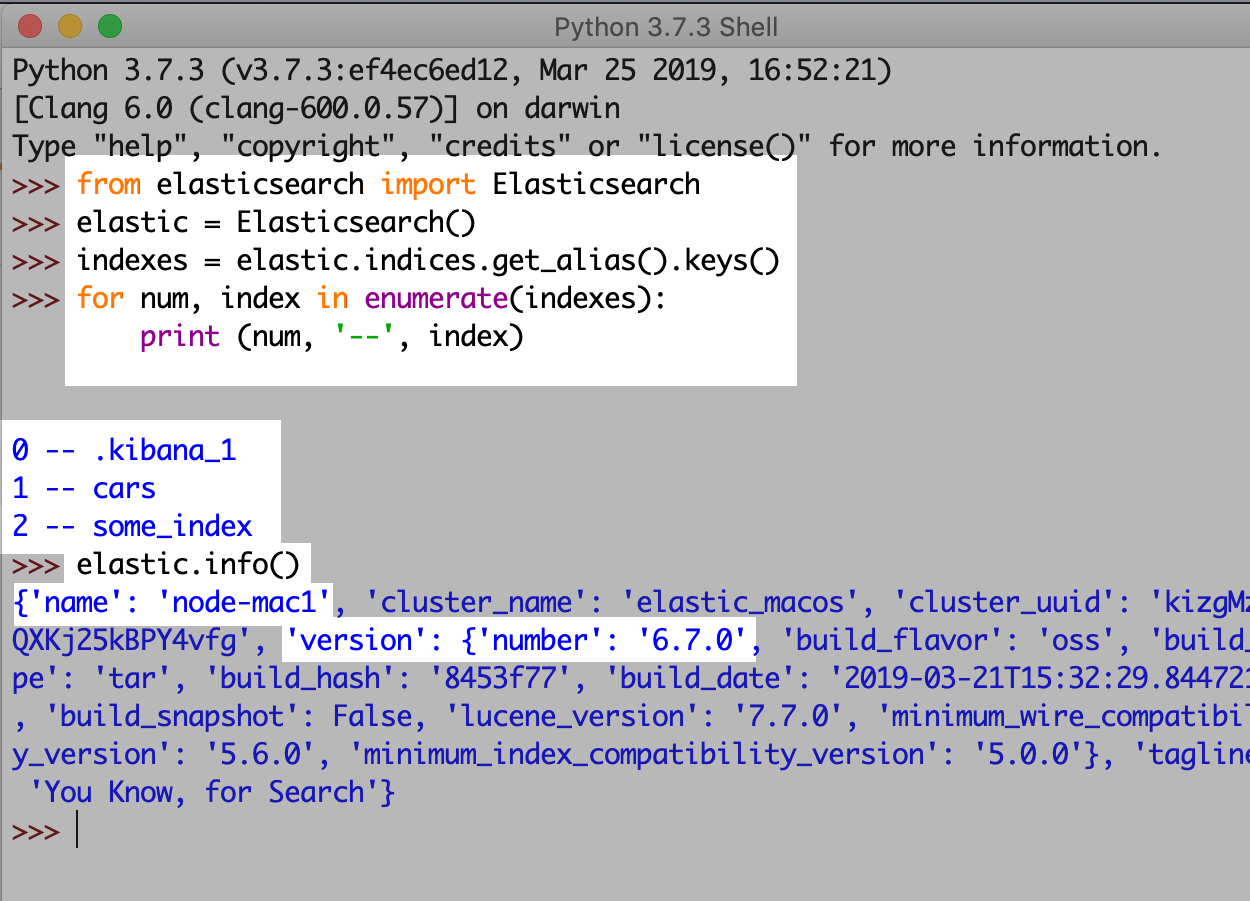 In this tutorial we used Python to retrieve a list of indices from Elasticsearch. We showed you how to install the elasticsearch library needed through pip and demonstrated the Python code you’d need to retrieve the indices into a dictionary and how to loop through them. Specifically we utilized the get_alias() method from the Elasticsearch client which returns all the indices in a cluster. We hope you found this tutorial helpful and if you have any questions don’t hesitate to reach out to us.