Elasticsearch Cheatsheet of the Most Important cURL Requests 252

This article serves as a handy Elasticsearch cheatsheet for some of the most useful cURL requests you need for executing HTTP requests to an Elasticsearch cluster. cURL is a computer software program with a library and command-line tool designed for retrieving, transferring or sending data, including files, via various protocols using URL syntax.

The name cURL stands for “Client URL.” The command for the cURL library is simply: curl and all cURL requests must be prefaced with this command. The basic structure of the request header is just the curl command followed by a URL.

Installing cURL on Your Machine or Server

Structure of the cURL header:

-X, --request — This request option indicates the HTTP verb used in the request. -H, --header — The header option is critical, especially for any requests requiring more header information. --silent, -s — The “silent” option will not display errors. --verbose, -v— The verbose option will yield more information about the request.

Here is an example using the --verbose or -v header option in a cURL request made to an Elasticsearch cluster: 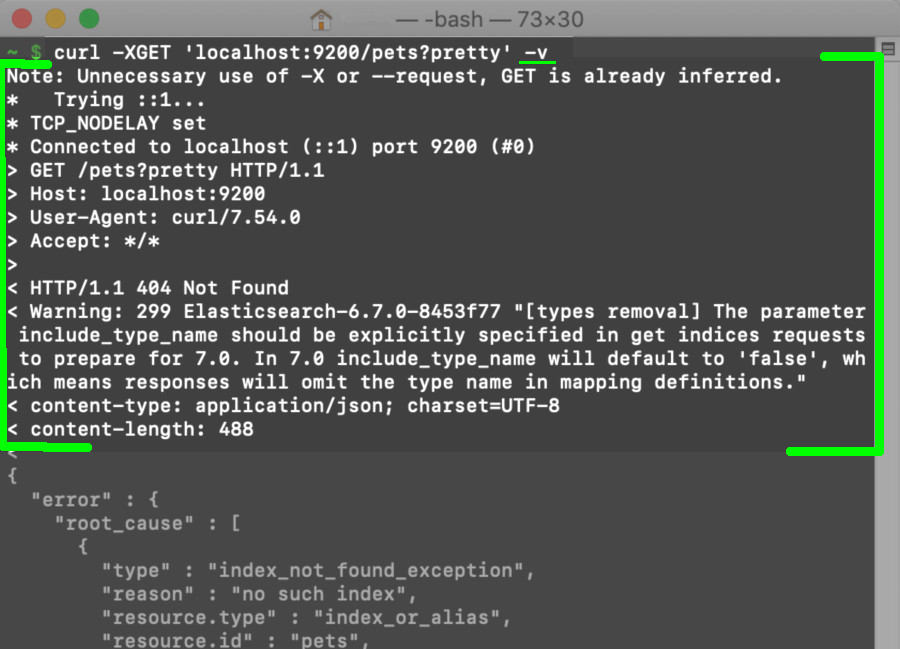 Some Important Caveats About Using cURL with Elasticsearch

The “types removal” depreciation in Elasticsearch 7.0:

As of version 7.0, this include_type_name header declaration will be required when passing an index’s document type along with the mapping body.

According to Elastic’s documentation, starting with Elasticsearch version 8.x, requests will no longer support specifying the document types and the entire include_type_name parameter will be completely removed, not just depreciated. However, be aware, as of April 2019 there are still some bugs associated with the include_type_name=true feature.

Beginning with version 6.0, Elasticsearch made a change to require all cURL requests, with a content body, to have the content type explicitly declared in the header. Failure to properly execute this request will result in a 406 status Content-Type HTTP error.

You must simply include -H 'Content-Type: application/json' somewhere in the request header to avoid this error.

Getting a 406 Content-Type Header Error After Making a cURL Request to Elasticsearch:

Refer to the curl --help command to get more information.

Using a cURL Requests to Get Elasticsearch _Cluster Information:

Making GET Requests to an Elasticsearch Cluster Using cURL:

Using GET to return information about the Elasticsearch cluster running on a specific port:

The JSON response should return fields with the "cluster_uuid” and "cluster_name" information, assuming that Elasticsearch is running on the default port of 9200. Note that the port can be changed in the elasticsearch.yml file.

GET Data About an Index

You can use the following request to return the mappings, shards and replica data and other information about this particular index on the cluster:

You will notice that the -X option for the curl command is only needed for some of the cURL requests.

Here is a command you can use to create an index with some settings specifying the "number_of_shards" and "number_of_replicas" for the index:

Here is a request you can use to create an index using PUT, as well as a document type in the header (depreciated since version 6.0).

This request will also create a "mappings" schema for the index with text, integer, boolean and date field types:

FOR ELASTICSEARCH v6.0 AND OLDER:

FOR ELASTICSEARCH v7.0 AND NEWER:

NOTE: With Elasticsearch Version 7.0 and newer, the mapping requests using PUT will not accept the type name in the header.

You can also specify the "_mapping" and "settings" while using an HTTP request to create an index.

Here is an example showing you how to create an index with the shard and replica "settings." This command will also give the index a "mappings" schema:

You can use a cURL request to return all of the indices in an Elasticsearch cluster:

If you are unsure of what indexes you’ve created on a cluster, you can use this command to return a complete list of indexes, including hidden Kibana indexes, as well as their respective UUIDs: 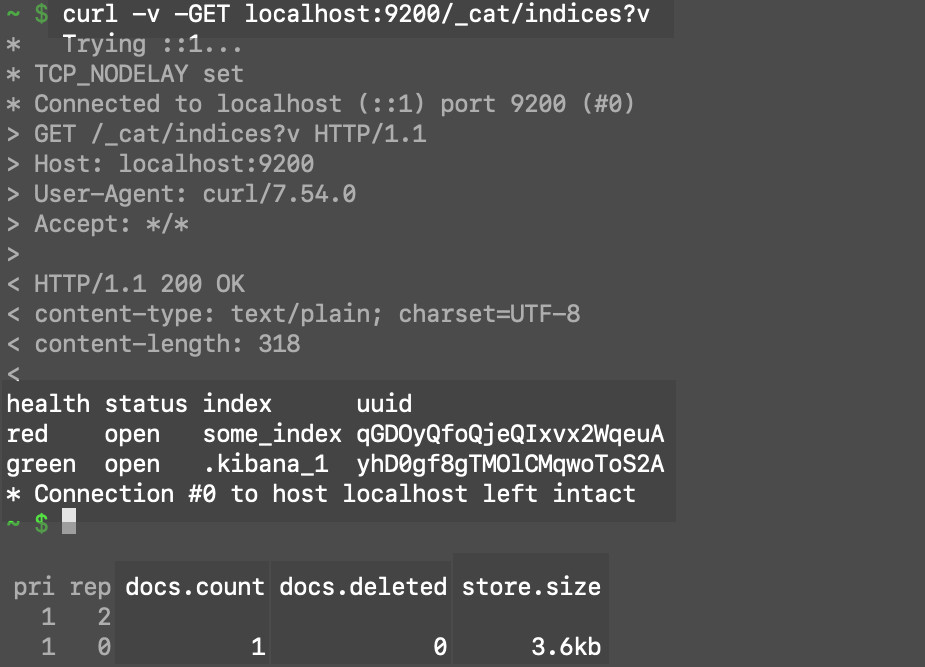 * Note that the index some_index, created earlier, has a UUID of qGDOyQfoQjeQIxvx2WqeuA.

Deleting Data in an Elasticsearch Index

Be especially careful whenever you perform these types of requests as it is very easy to accidentally delete indexes, documents or data that you didn’t intend to.

Delete an Entire Index in Elasticsearch:

WARNING: This action will delete the entire index and it should return a formatted JSON response with a "result" field indicating the request was successful:

You can also obtain the same results by just deleting the index’s document type:

Deleting a document in an index:

The _delete_by_query API can be used to target and delete specific documents in an index.

WARNING: The following request will delete ALL of your documents in the index:

Creating and Indexing Documents in Elasticsearch

You can also use cURL requests with the Index API to create, update and index documents. Just pass the document’s data into the body of the request, making sure the data maps conforms precisely to the mapping outlined for the index.

Here is an example of a simple POST request you can use to index a document. However, in this example, the document ID of 42 has already been indexed, so this request will merely update the document:

NOTE: If the index request fails and returns an error message with the "reason" being Rejecting mapping update to [some_index] as the final mapping would have more than 1 type probably means you passed the wrong document type in the header. With Elasticsearch Versions 7.0 and up to, but not including, version 8.0 you will probably just have to pass _doc as the document type in the header.

Making a cURL PUT request that returns a JSON response from Elasticsearch with a "result" of "updated": 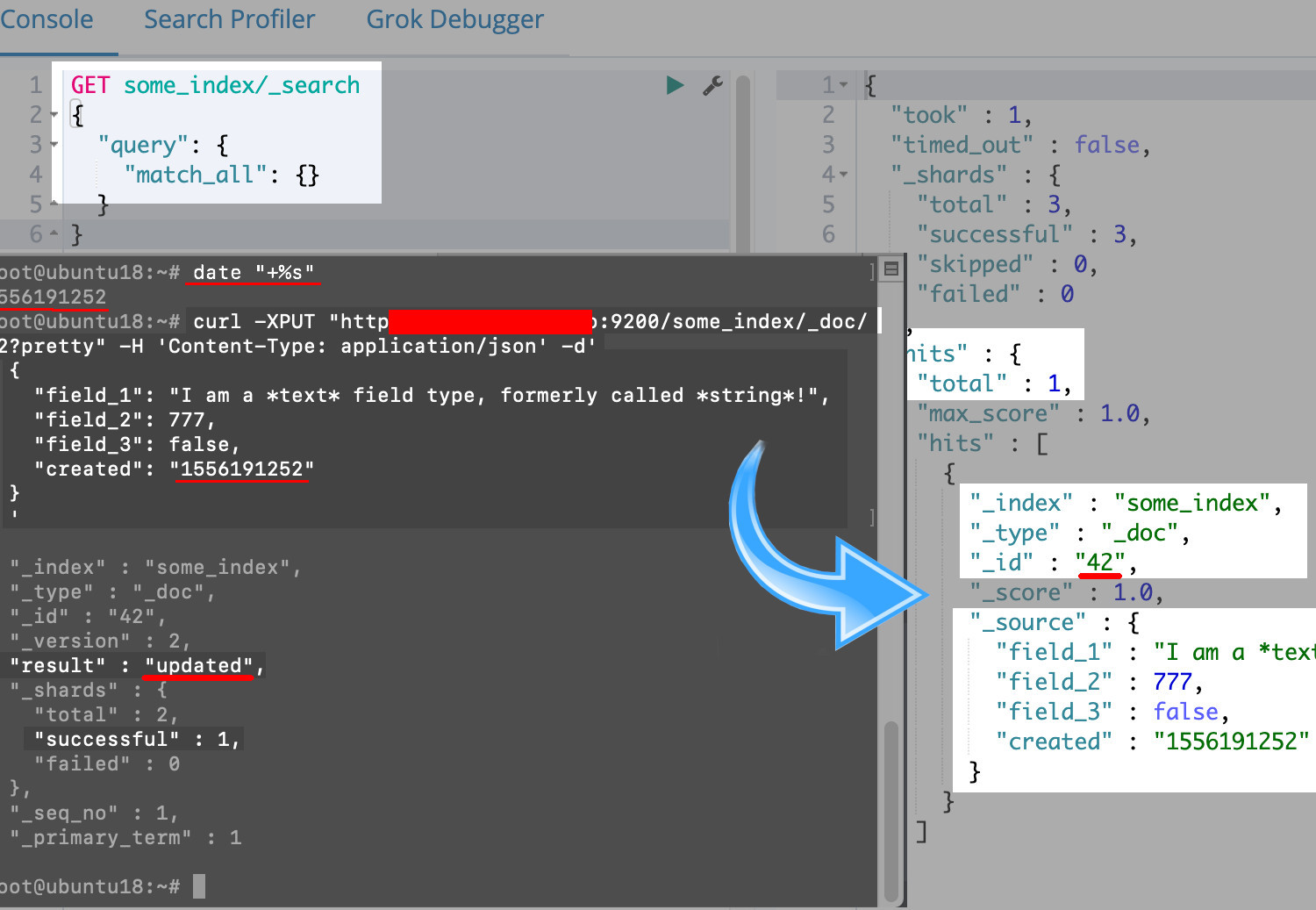 Index an Elasticsearch document with an autogenerated, dynamically-created ID:

If you change the HTTP verb to POST, instead of using PUT, and remove the explicit ID that is in the header after the document type, it will then create, or index, a document. Elasticsearch will then dynamically generate an alpha-numeric ID for the document: 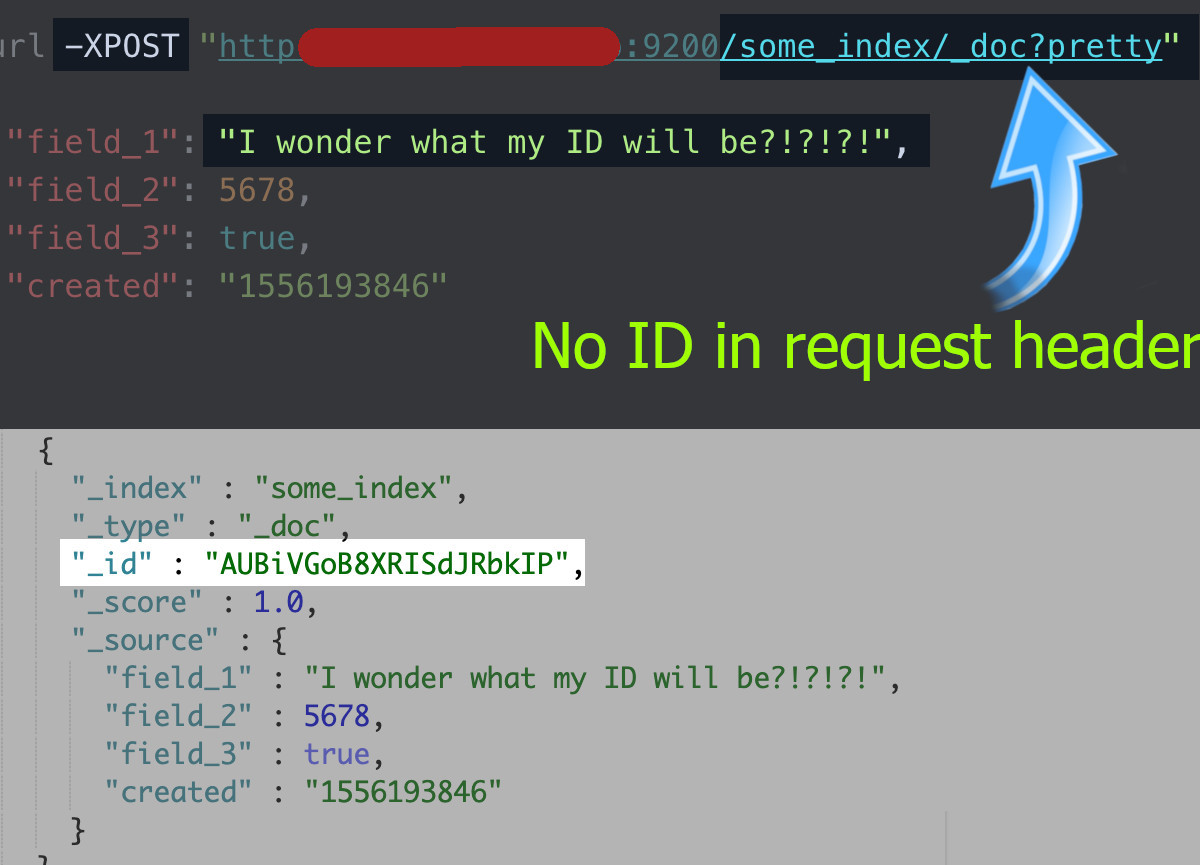 * In this example, the response should have a "result" field with a value of "created." In this instance Elasticsearch assigned the document an ID of AUBiVGoB8XRISdJRbkIP.

Using the _bulk API to index documents to Elasticsearch:

You can use the _bulk option at the end of the header and include a JSON object with the "_id" declared for each document in a nested "index" field:

The JSON file needs to follow a similar JSON format as the previous _bulk API example. You can specify the "_index" name and _type" at the head of each document.

This example neglects to declare the IDs so Elasticsearch can dynamically generate alpha-numeric ones for each document:

Simply enter that data into a text editor and save the file as data.json. Make sure to cd into the same directory as the file and then make the request to upload the JSON file into your Elasticsearch cluster:

You can use the _search header option to perform query requests that will only return certain documents that match specific criteria.

Use the _source option to limit the fields returned by the query:

NOTE: It is critical to not forget to add the brackets “[]” in the “_source" field whenever querying the field and value, or you will receive a java.lang.IllegalArgumentException error.

Here is an example of a query request that indicates a certain field must match:

In this tutorial you learned how to execute several of the most commonly utilized commands for executing HTTP requests to an Elasticsearch cluster using cURL. Most newer versions of Linux come with cURL preloaded. However, if you do not have it, cURL is fairly easy to install.

When using this cheatsheet, bear in mind that different versions of Elasticsearch will have somewhat differ command-line requirements. Failure to execute the commands as instructed in this article for the specified Elasticsearch version will result in errors, such as passing the wrong document type in the header and 406 status Content-Type HTTP errors.