This tutorial will explain how to run Redis with Docker Compose. Compose is designed to run multi-container Docker applications using a YAML file for configuring the application’s services. Once configured, all the functions can then be created and started with a single command. This article will provide precise instructions on how to build a Docker container, run Redis with Docker Compose and how to deal with various errors.

Docker must be installed on the host machine or server running the Redis container. Execute thedocker -v command to confirm the currently installed Docker engine version.

The following docker pull command can be used to download the image before building the container:

Note that the official Redis and Bitnami images currently uses the Debian 9 “stretch” version of Linux.

The default command from the Docker hub profile for Bitnami Redis allows the use of an empty password, as shown in the following example:

NOTE: The ALLOW_EMPTY_PASSWORD setting should only be used for development purposes.

The 6379 Redis port can also be bound to the host machine as follows:

As shown in the following representation, Docker will download the image and run the container in the foreground: 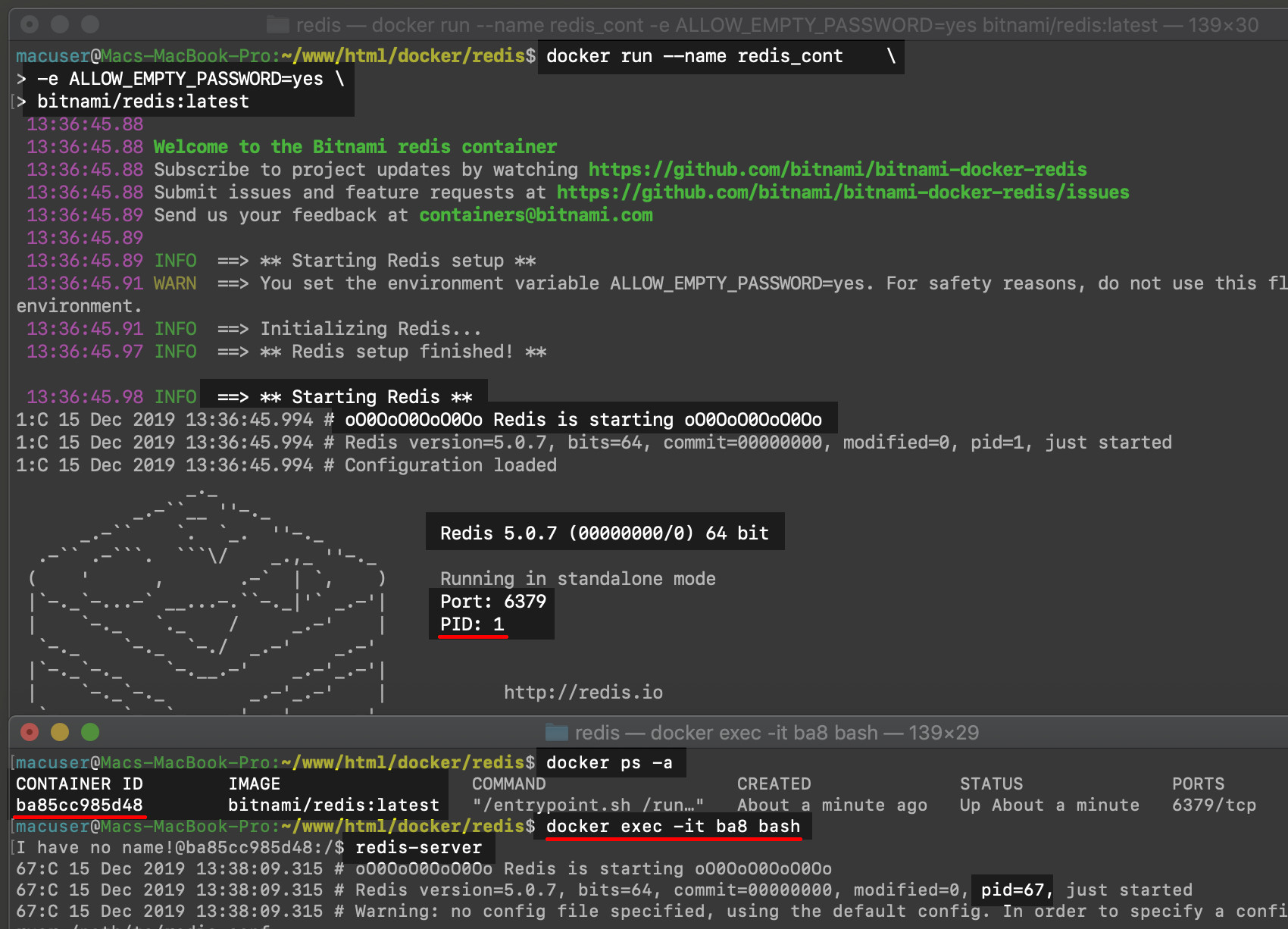 Following is another run example that bind mounts a local directory to the container’s volume:

Note that the above command will allow for persistent data to remain even if the container is destroyed.

If the previous docker run command returns an invalid reference format error, try removing the -name tag or use the redis:latest command to pull from the latest image, as shown here:

NOTE: Be certain to execute the above command in a terminal window that isn’t running the container in the foreground.

If a “Could not create server TCP listening socket *:6379: bind: Address already in use” error appears, try stopping and then removing the container.

If ps is installed with the image’s Linux distro, use ps -ef | grep redis command to search for all of the Redis processes and then execute the kill -9 command followed by the process ID to stop the operation.

Stop Redis on the host machine

In this scenario, there is typicaly a port conflict due to another instance of Redis running on the host machine. To fix this issue, exit out of the interactive execution of the container and stop the Redis server.

On a Homebrew installation of Redis on MacOS, stop the service with the following command:

If all else fails, connect to the interactive client for Redis with the redis-cli command and then use the shutdown command.

In Linux, the following command may also be effective:

There aren’t any environment variables that can be set using the docker-compose.yml file. However, some functions can be modified with the redis.conf file.

Create a config file for Redis

To inject a custom configuration file for Redis when building the Docker container, create the redis.config file somewhere in the project directory and download a version of the config file that matches the version found on the Redis website.

The following configurations will specify a bound IP address and port:

Create a Docker-Compose file for Redis

Be certain to specify the relative path for the redis.conf file and for the Redis data. A password can be specified by invoking the redis-server --requirepass command under the command: field, as shown here:

The above networks: fields will assign the container an IP address of 172.28.1.4. The "redis-alpine" image will install Redis on a barebones “Alpine” distro of Linux. 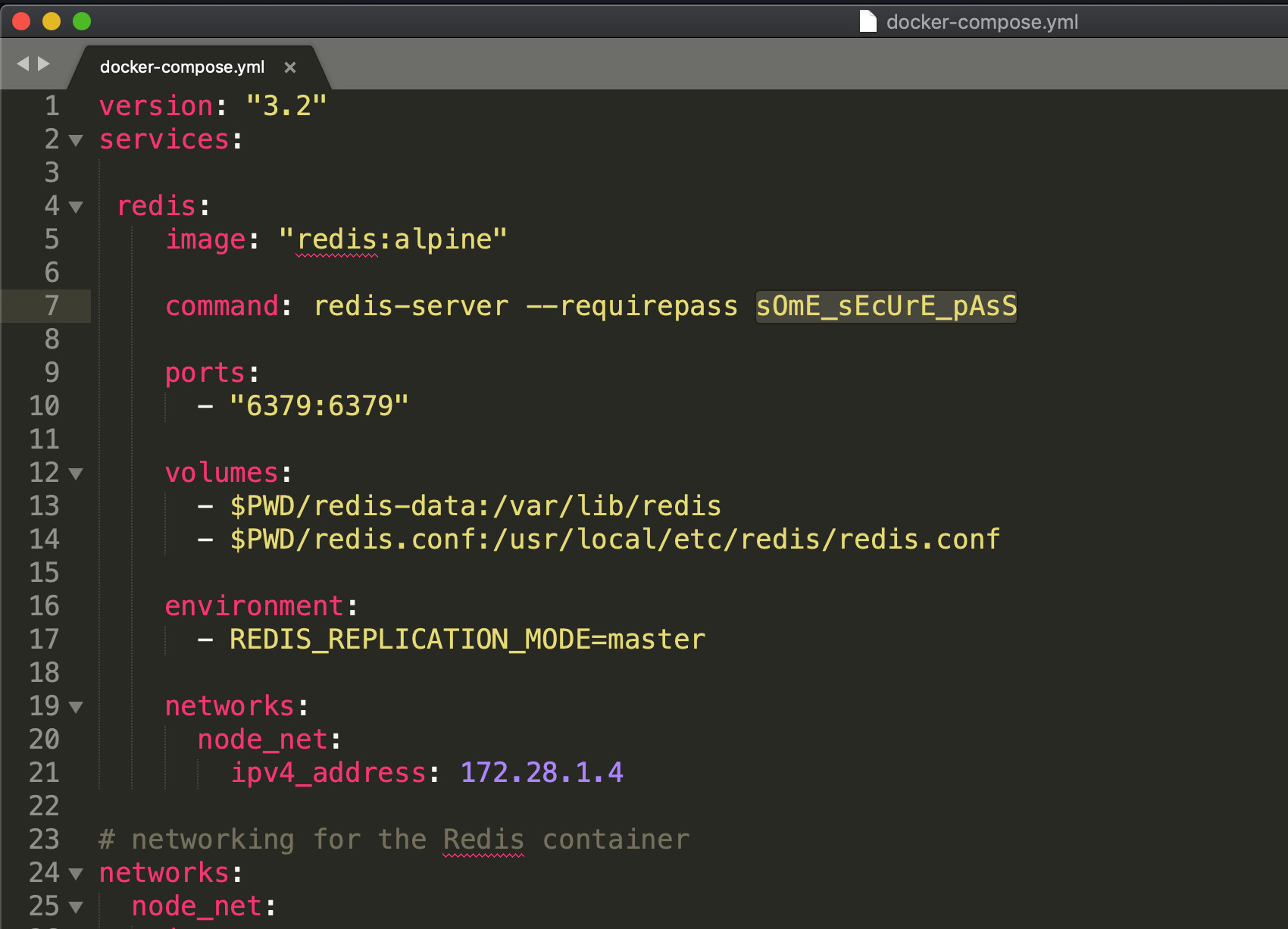 Build the Redis with Docker Compose

Now save all of the settings and then execute the following docker-compose command to spin-up the container, after it is built from the YAML configuration:

The container should now be running in the foreground of the terminal window. Open another terminal instance, or a new tab, and use the docker ps command to have Docker return the container’s alpha-numeric ID.

Run commands in the Redis container

With the container ID obtained, use the ID to execute commands and connect to the Docker-Compose container interactively. Execute the following docker exec -it command to get access to its bash shell:

NOTE: When executing the above command, be absolutely certain to replace {CONTAINER_ID} with the actual ID of the container.

This tutorial explained how to run Redis with Docker Compose. This article covered how to use Docker pull to download the Redis image, how to run Redis with Docker, how to bind the Redis port when running Docker, bind a local volume for persistent Redis data and start the Redis server. The tutorial also covered how to remedy errors, stop the Docker container, run Redis with Compose and how to create a config and various other files for Redis. Remember that it is absolutely critical to replace the {CONTAINER_ID} placeholder with the actual ID of the container when executing the docker exec -it command to get access to its bash shell.