How to Set-up Persistence in Redis

Written by Data Pilot
July 31, 2019
Subscribe
Like
Have a Database Problem? Speak with an Expert for Free
Get Started >>

The Redis Database Backup, or RDB, files are snapshots that are taken at a predetermined frequencies to be used as a backup in a point-in-time recovery in the event of a data storage failure.

How to Set Up the Redis Database Backup

The above command will return the directory for the Redis installation and should look something like the following:

Now look for the “SNAPSHOTTING” section of the file. It should resemble the below screen shot: 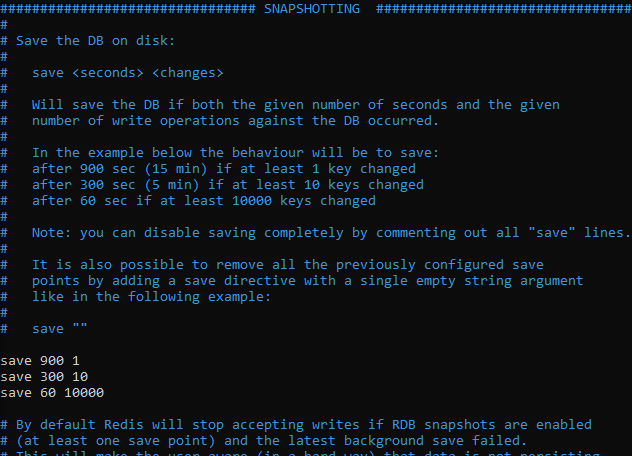 The above image shows that Redis provided default values, but custom configuration can be added as needed as shown in the following script:

The above code instructs the databases to perform a snapshot for every 100,000 keys changed in under 10 seconds. This type of setting is the most prudent for large databases.

The append-only file, or AOF, is a mode of data persistence where Redis persist the dataset by taking a snapshot and then appending the snapshot with changes as those changes take place.

How to Set Up the Append-Only File

Setting up the append-only file in the redis.conf file is executed by finding the “appendonly no” line in the file and setting it to “yes”. Refer to the below “Append Only Mode” screenshot: 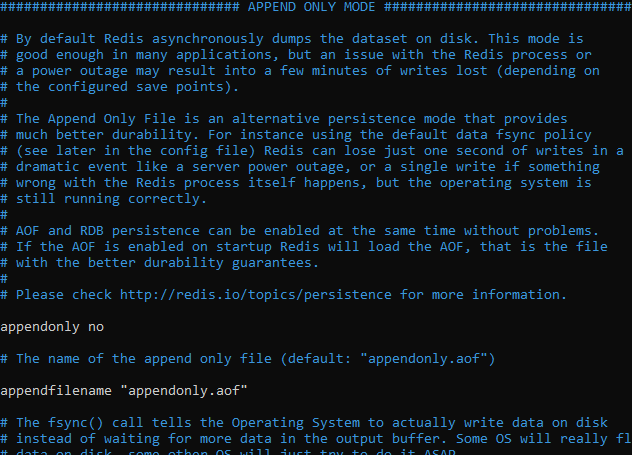 Execute the below command in sequence in the terminal:

NOTE: If the Redis server is still running, shut it down using the Ctrl+C command before proceeding.

The above command employs the redis-server command to start the server. It must then be appended with the location of the redis.conf file.

To verify that the append-only file was properly enabled via the configuration file, navigate to the Redis directory to view the “appendonly.aof” file generated by Redis server.