This JSON overview tutorial will provide examples on how to easily create JSON objects. JSON objects are designed to help package information so it is readable by both humans and computers. It can also serve as an exchange between browsers and servers as well as APIs between various programming languages. A JSON files use the .json extension and a data interchange file than can be read by most programming languages. This includes JavaScript when executing the fs.readFile() method in Node.JS or jQuery’s jQuery.getJSON() method in front-end JavaScript operating in a browser.

A Brief Overview of JSON

A JavaScript Object Notation, most commonly referred to a JSON object, is more accurately described as a data type or file format than a programming “language”. JSON was derived from JavaScript by Douglas Crockford in 2001 to provide a stateless protocol for exchanging data between servers and APIs. JSON supports a wide variety of data types that includes strings, integers and name-value pair objects.

Using JSON in a JavaScript or HTML file

JSON objects are essentially the same a JavaScript object literals, with the one difference being that JSON object fields must be enclosed in double-quotes.

It was designed and created with JavaScript in mind, so the best way to use JSON (on the front end) will either be within in the HTML file itself, or in a JavaScript (.js) file. The following example shows how you can use the HTML <script> tag to create a JSON object:

NOTE: The JSON Standard specifies that you use double quotes (") when declaring JSON keys or values.

How to use JSON Objects in Other Languages

Most of the modern-day programming languages have native JSON support, or at least builtin libraries used to parse, iterate and access JSON fields and the respective data.

How to use JSON Objects in Python

The following Python code demonstrates how to declare a JSON string and convert it into a JSON-compliant dict object:

When executed using the python3 command, the above code should display the following results in a terminal or command-prompt window:

As shown above, and in the below screenshot, Python will return a json.decoder.JSONDecodeError exception if there is an attempt to pass an invalid JSON string to the json.loads() method. 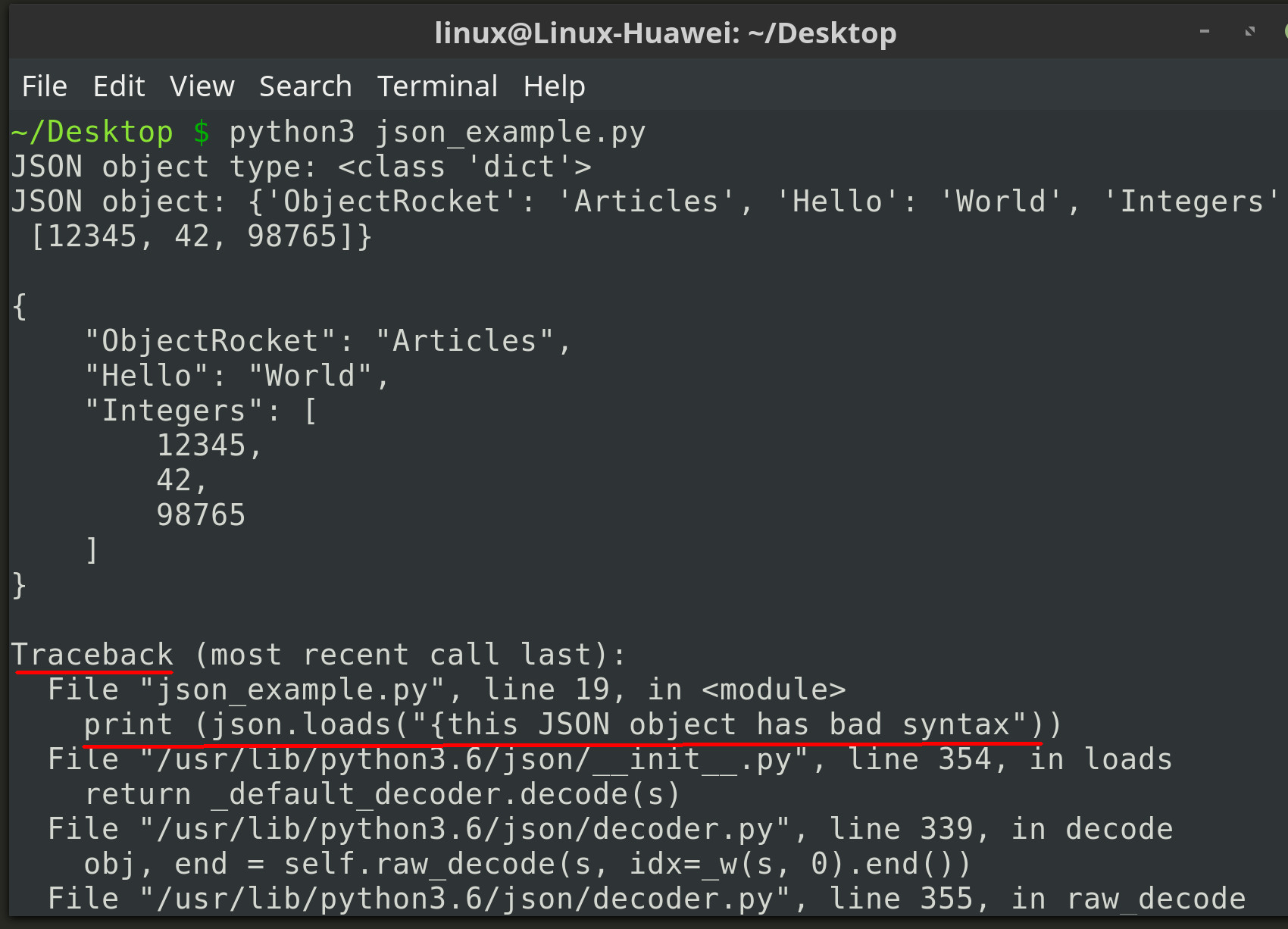 How to use JSON Objects in PHP

PHP has two functions called json_decode and json_encode. These allow for easy conversion of JSON objects into strings, and vice-versa. The following is an example of how to decode a PHP string into a JSON object and then how to convert it back into a string:

When the above PHP code is run in a browser it should display the following results on the web page:

This JSON overview tutorial gave examples of how to create JSON objects. The article provided a brief overview of what JSON is and explained how to use JSON in a JavaScript or HTML file. The tutorial also explained how to use JSON objects in other languages, specifically Python and PHP. Remember that the JSON Standard specifies that double quotes (") must be used when declaring JSON keys or values.