Written by Data Pilot
April 07, 2020
Subscribe
Like
Have a Database Problem? Speak with an Expert for Free
Get Started >>

In this article we will discuss the update command in TimescaleDB. There are some recommended prerequisites but you’re also welcome to just jump right in. We have other articles about the other CRUD operations in TimescaleDB but this article will be dedicated to the update command, what it does, and some demos with real code examples on how to do it.

Ensure to install and configure the following for your OS:

Basic PostgreSQL is required, to be able to follow along with the tutorial.

TimescaledDB fully supports SQL so if you’re familiar with SQL the commands for performing the UPDATE statement should be familiar. We can update data from a hypertable via standard UPDATE statement.

Let us consider the following table that we will be using for this demo. 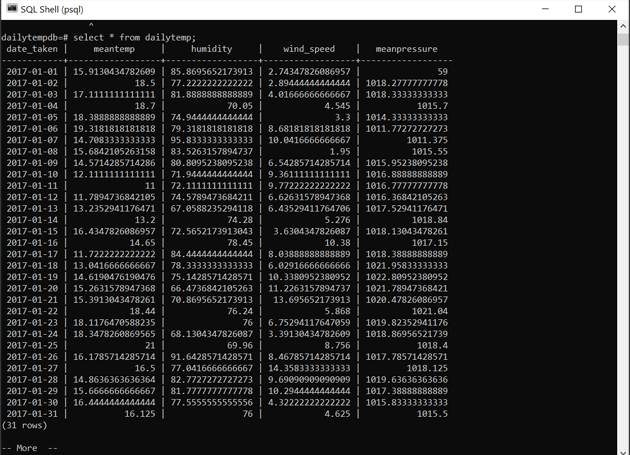 The above table is the monthly report for a daily record temperature in Delhi.

In this section, we will be looking at how to update a single record into a hypertable via the UPDATE command. We will be using the following statement.

We can very the result via SELECT statement, and the result should look something like the following.

We performed a single update in the previous section, now in this section, we will be showing you how to update multiple rows or records.

We will be using the previous table for this example.

The basic form of updating multiple records is as follows.

UPDATE statement with WHERE clause

Now we can perform the update of multiple record within the hypertable.

The above query will update multiple tables within the dailytemp where the value of their ‘meantemp’ column is less than fifteen, after executing Postgres notifies us with the following text: ‘UPDATE 12’.

We can verify via SELECT statement, the result should look something like the following:

NOTE: Removing the WHERE clause in the UPDATE statement will update the whole rows/records of the table.

We hope you found these demonstrations of how to use the update command in TimescaleDB helpful. Thank you for joining us for another TimescaleDB tutorial from Object Rocket.