TimescaleDB Tutorial for an ObjectRocket Instance

Written by Data Pilot
May 11, 2020
Subscribe
Like
Have a Database Problem? Speak with an Expert for Free
Get Started >>

Time-series databases, such as TimescaleDB, use dynamically assessed and indexed values that are based on timestamps, resulting in vastly improved performance. TimescaleDB uses compression algorithms to aid in decreasing the footprint of stored data. This reduces storage costs while increasing query speed of records on large databases.

Navigate to the Mission Control panel for the ObjectRocket instances and create a new instance for TimescaleDB. The panel will look like the following image: 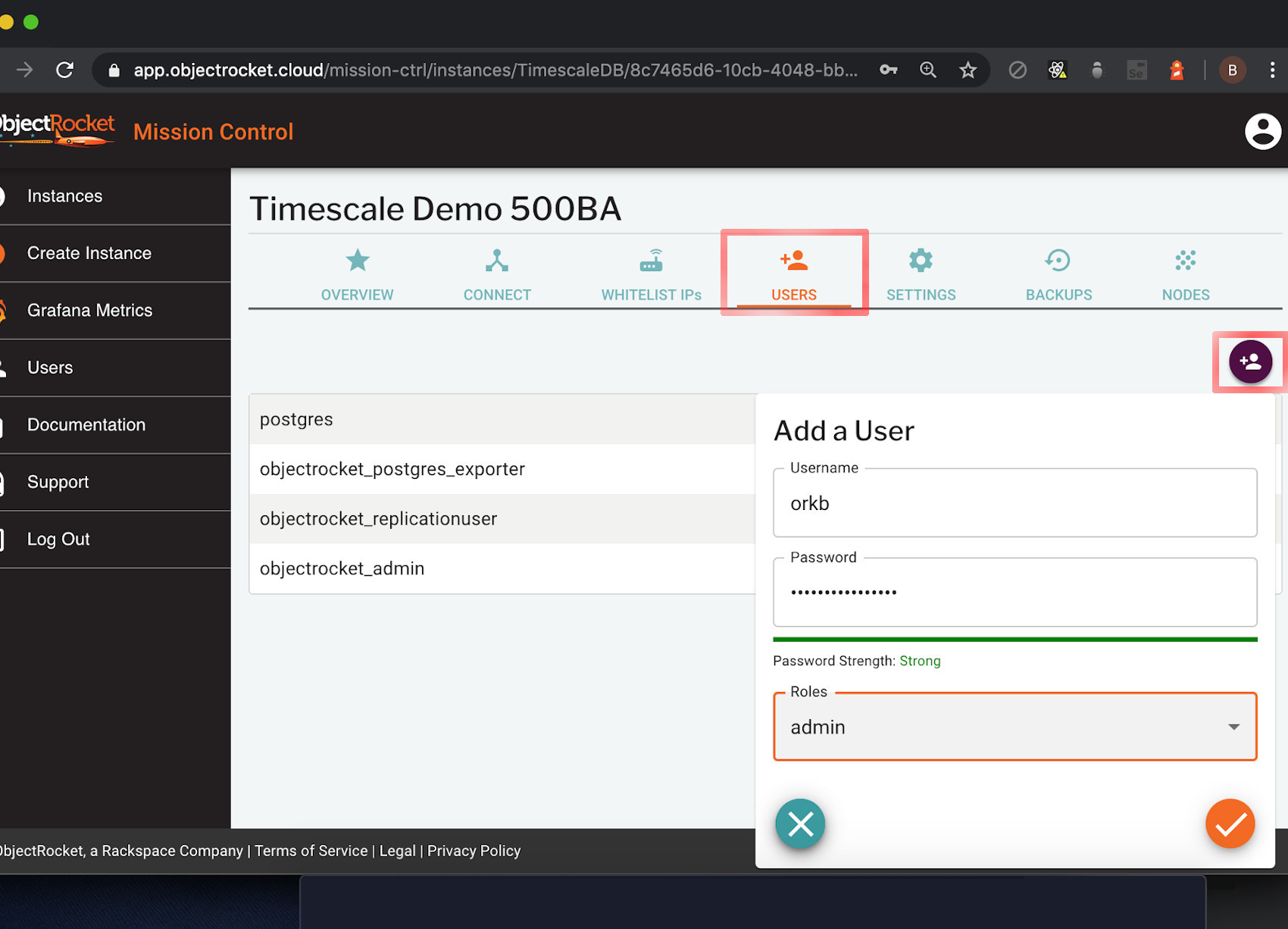 Connect to TimescaleDB With PSQL

Once the instance is running, and a user for Postgres has been created, connect remotely using the PSQL command-line interface on the local machine. Open a new shell terminal or command-prompt window on the machine to get started.

Use PSQL to Connect to a Database

Confirm the PSQL service is running by executing the psql -V command in a terminal window. Next, execute the pg_ctl utility pg_ctl command to start the PostgreSQL cluster. Use the following command if Postgres is installed on a Mac:

Take the ingress URI for the instance, the username and the port that the TimescaleDB instance is running on and pass them all to the psql command as shown in here:

Here is a breakdown of the he psql command:

Following is a screenshot of connecting to the database: 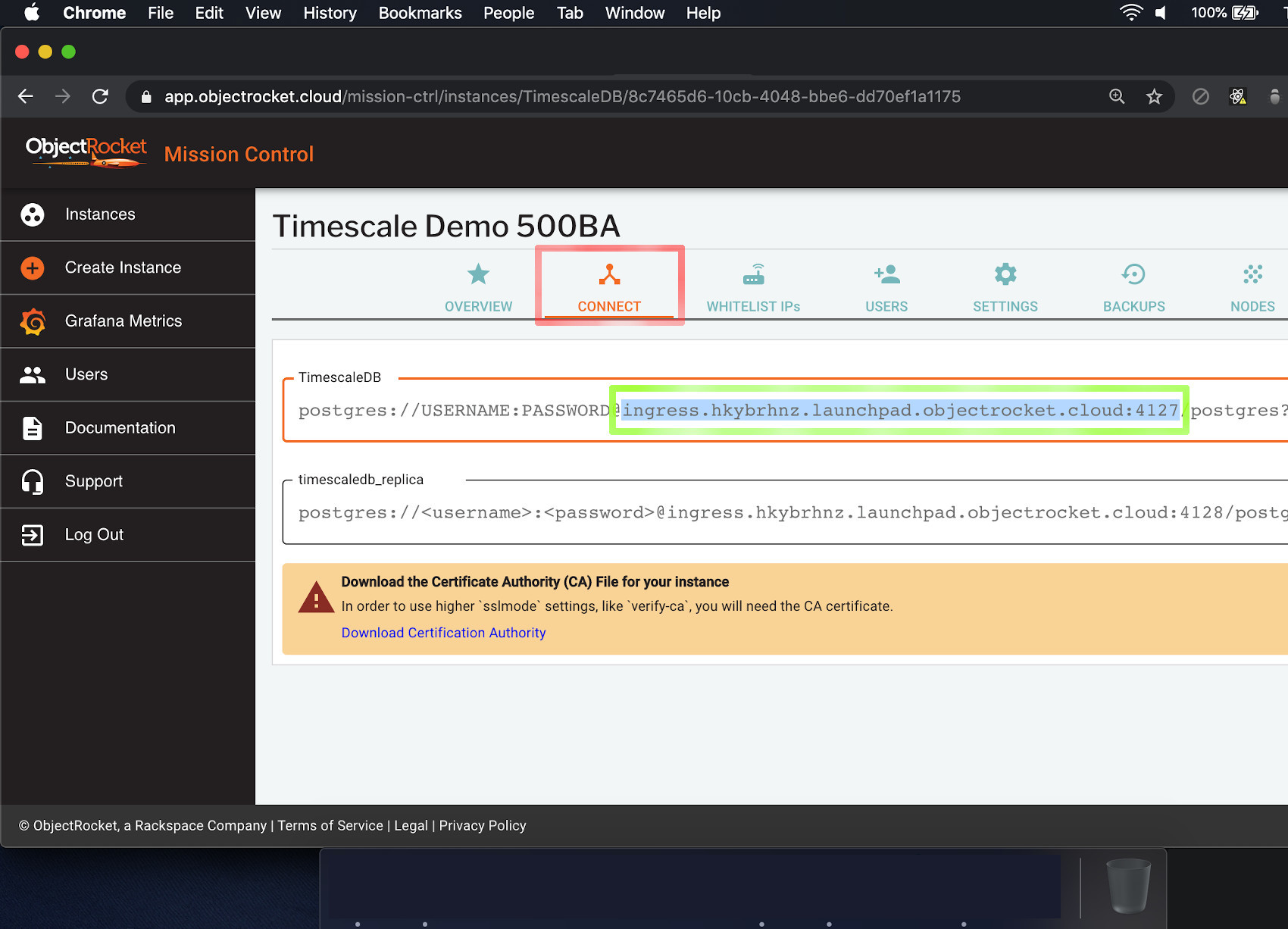 Use Psql to Create a Database for TimescaleDB

When using Postgres to create a database for TimescaleDB, be certain to correctly input the password for the ObjectRocket instance and then press the -kbd-Return-/kbd- key. The system should now grant access to the database stored on the instance using the PSQL interface.

Now execute the following CREATE DATABASE SQL statement to create a new database for the instance:

Once the database is created, use the \c sample_db command to connect to the new database. Type \q to exit the Postgres CLI.

Following is an image of creating the database for a TimescaleDB ObjectRocket instance: 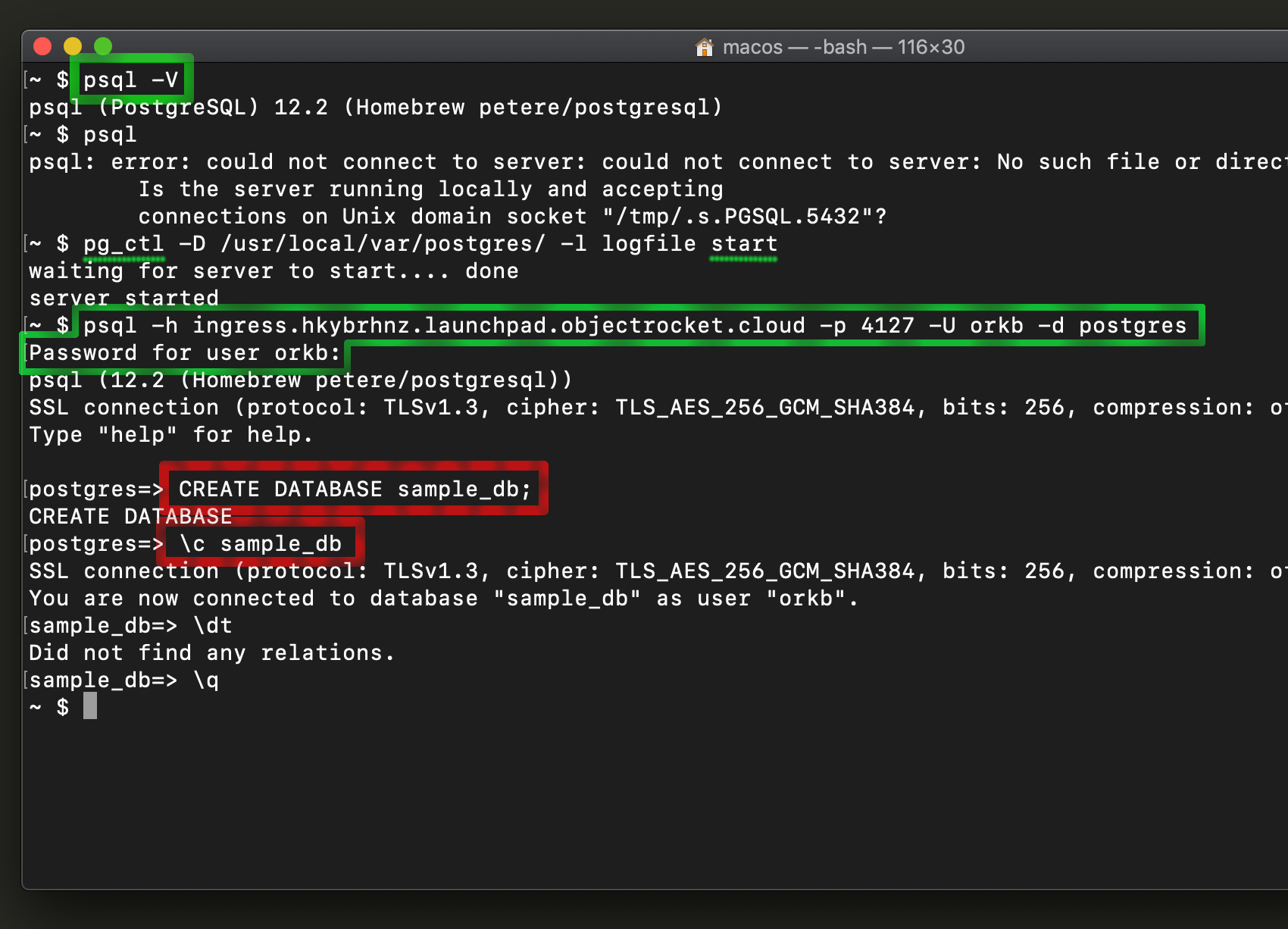 The PostGIS Docker image for TimescaleDB can also be used to run a Postgres server that can access the ObjectRocket instance. Make sure there is a supported version of the Docker Engine installed on the local device.

Executing the following docker pull shell command will download the PostGIS image tag for a version of TimescaleDB that is compatible with Postgres 12:

NOTE: Make certain the version of Postgres specified in the Docker tag matches the version of the ObjectRocket instance. Check out the complete list of the TimescaleDB at PostGIS tags for further details.

The timescale/timescaledb-postgis image can now be used to run a custom tailored TimescaleDB container for the ObjectRocket instance using the docker run command.

The following example shows how to run a new container instance of the PostGIS image that can be used to connect to the TimescaleDB instance:

Use the -p or --port flag to specify the ObjectRocket instance’s port; the default port for Postgres is 5432. Make absolutely certain the second port, the one on the right-hand side of the colon, matches the instance’s port.

Following is a screenshot of the Postgres environment variables for the Docker example: 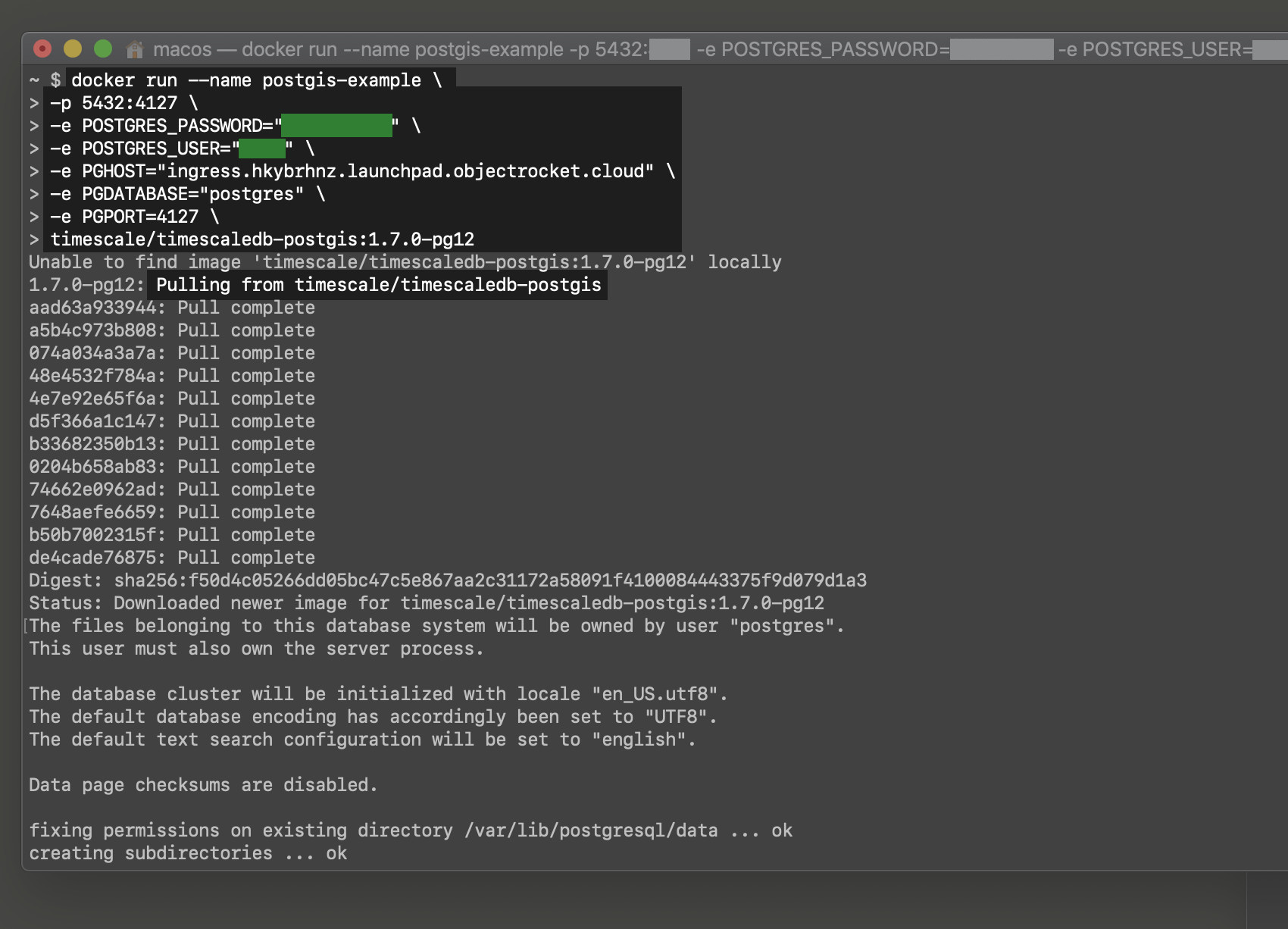 When the image for the timescale/timescaledb-postgis has completed pulling, it should run the TimescaleDB server as a container in the terminal as a foreground service.

Provided the container in the terminal window is running as a foreground process, the following welcome message should be visible once the container has started:

NOTE: To run the container as a background daemon, use the -d (or --detach) option when executing the docker run command.

In order to access the Postgres interface for the TimeScaleDB instance, open a new shell tab or window and execute the following docker exec command to enter the container:

Make sure to use the container name that was specified when executing the docker run command earlier and pass the instance’s username to the -U flag. The results should resemble this: 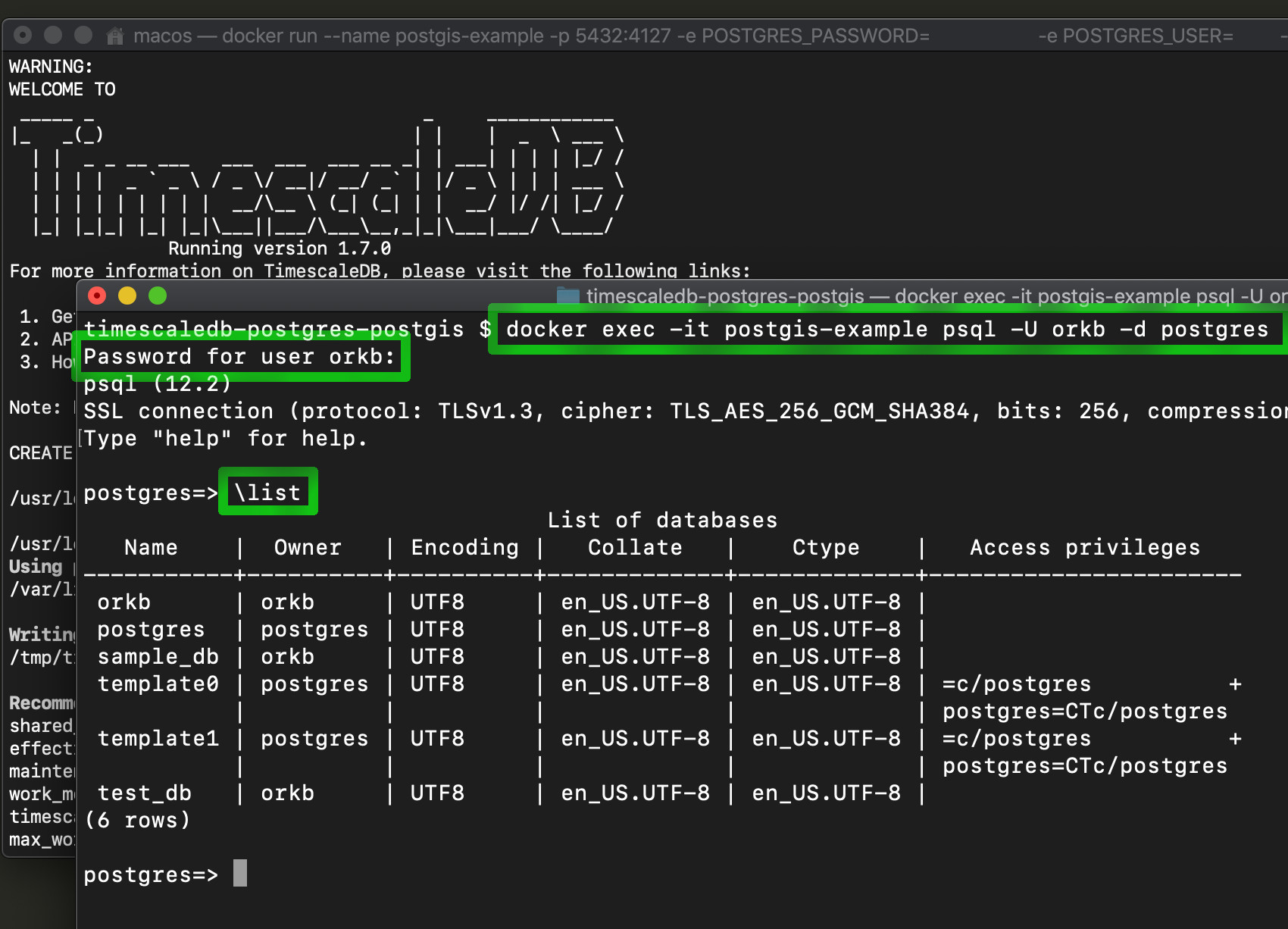 After the database has been created, execute the \q command to quit the container’s Postgres interface and then input exit to leave the container.