This tutorial will explain how to use the web app with Go and PostgreSQL to retrieve a record in a PostgreSQL database and will also provide an explanation on how to create “routes” and “listeners.” Being able to use the Golang script to retrieve a PostgreSQL record is a very useful function when retrieving records for update purposes.

*A basic working knowledge of SQL and an understanding of the GoLang’s “nethttp” package.

How to Create a Sample Database

Create a sample database, that will be used for executing the examples used in this tutorial, with the following command in the PostgreSQL shell.

Now connect to the newly created database via the meta-command ‘c’ followed by the name of the database as shown here:

Now execute the following command to create the table columns within the database:

Now add some records with the following commands:

Now perform a basic SELECT operation to see if the INSERT operation was successful. As shown below, the records should be visible within the tblretrievetest:

How to connect Golang to the PostgreSQL database

The above Golang script connects Golang to the PostgreSQL database named retrievetest. For a detailed discussion of the above script, consult the link: Web App with Go and PostgreSQL : Connecting GoLang to PostgreSQL

How to Retrieve All the Records in PostgreSQL using Golang Script

This section will explain how to retrieve all PostgreSQL records with Golang.

The struct{} command is used to create a compilation of fields that match the fields within a given table. These fields will be used as a placeholder for the values of the fields of the table.

The following Golang package main command instructs the Golang compiler to compose the file as an executable file:

How to import the Golang dependencies

The following dependencies must be imported in order to access the methods that will assist in interacting with the database. Execute the following command to import the dependencies:

Following is a breakdown for importing the Golang dependencies:

NOTE: In order to keep the driver from becoming code dependent, only the types defined in the database/sql should be used.

How to use the Golang script to retrieve a PostgreSQL record

The following Golang script will retrieve all of the PostgreSQL records within the table and display the results in the browser:

The Golang entry point and the func main( ).

This section will describes the entry point of the program via the func main() command. The following code will create “routes” and “listeners:”

The http.ListenAndServe() will indicate what port the server will listen to.

To test the script, navigate to the project directory and execute the following command:

The terminal will confirm the connection to the database, that it is listening to port “:8080” and waiting for request. An argument can then be sent through the browser to retrieve all records using the following URL: http://localhost:8080/retrieve 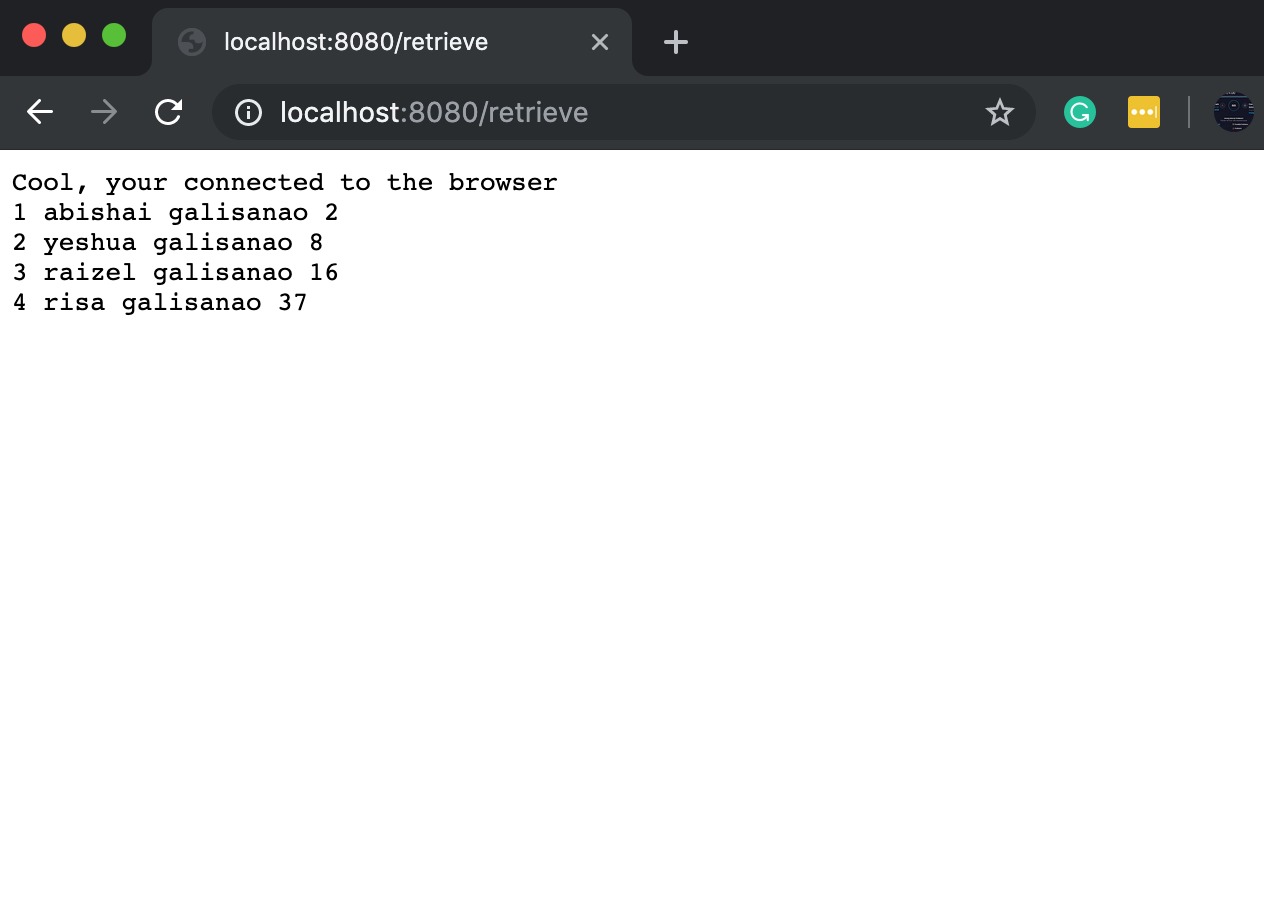 This tutorial explained how to use the web app with Go and PostgreSQL to retrieve a record in a PostgreSQL database. The article specifically covered the prerequisites needed to retrieve a record in a PostgreSQL using Go, how to create sample database, how to connect Golang to the PostgreSQL database and how to retrieve all the records in PostgreSQL using the Golang Script. The tutorial also covered the GoLang struct{} command and explained how to import the Golang dependencies. Remember that the Golang dependencies must be imported in order to access the methods to interact with the database. Only the types defined in the database/sql should be used to prevent the driver from becoming code dependent.

Following is the working code in its entirety: