Written by Data Pilot
October 07, 2019
Subscribe
Like
Have a Database Problem? Speak with an Expert for Free
Get Started >>

If you’re working with data in a PostgreSQL database, you’ll find that you sometimes need to delete records from a table. This task can be accomplished in a GoLang script with the help of the Go database/sql package. In this article, we’ll show you how to build a simple web app that will delete a record in PostgreSQL using GoLang.

Before we dig into our GoLang script, it’s important to review a few prerequisites that are necessary for this project:

The output of this command should look like the following:

Let’s begin by creating a sample database that we’ll use in this article. To do this, use the following command in the PostgreSQL shell:

After we create the database, we’ll also create a table named tbldeleteTest. We need to be connected to our newly-created database, so we’ll use the PostgreSQL meta-command \c and specify the database, as shown below:

Then we’ll execute the following command:

The result of the above statement should look like this:

How to Connect GoLang to a PostgreSQL Database

Now that we have a sample database to work with, we can connect GoLang to it.

To do this, we need to create an executable file that we’ll be using to interact with our database. In our project directory, let’s create a GoLang file and name it main.go. Then we’ll add the following code:

For a detailed explanation of what’s going on in the code shown above, you can consult this link: Web App with Go and PostgreSQL : Connecting GoLang to PostgreSQL

Deleting a Record in PostgreSQL Using a GoLang Script

In this section, we’ll look at the GoLang code that will perform the DELETE operation in our PostgreSQL database.

As we mentioned earlier, we’re going to create a GoLang executable file. That’s why we include the line package main in our file– it tells the GoLang compiler that this package will be compiled as an executable file.

To access the methods and functions that we’ll need to connect and interact with the database, we import the following dependencies:

Let’s take a closer look at each of the packages we imported:

NOTE: It’s not advisable to use the package directly in the code. Instead, it’s better to use the types as defined in the package database/sql, to avoid making the code dependent on the drivers.

In this section, we’ll show you the GoLang script that will be used to delete a record in our PostgreSQL database:

The above code simply performs the deletion of a specific record using the db.Exec() method; it then checks for errors. After that, it generates a notification message in the browser.

This section will focus on GoLang’s entry point, the func main(). Shown below is the GoLang script:

The http.HandleFunc() acts as the router of our basic application. It decides what function to execute based on the parameters it receives from the browser. In this case, the only router we have is for the /delete parameter.

NOTE: It’s important to point out that we have just performed a callback function in the above code, where we pass a function as an argument.

Next, we tell the server to listen to port :8080, using the http.ListenAndServe() function.

At this point, we can test our GoLang script by navigating to the project directory in our terminal and using the following code:

This tells us that the server is now running and listening on port “:8080”. To execute our web app, we then navigate to it using the following URL: http://localhost:8080/delete. 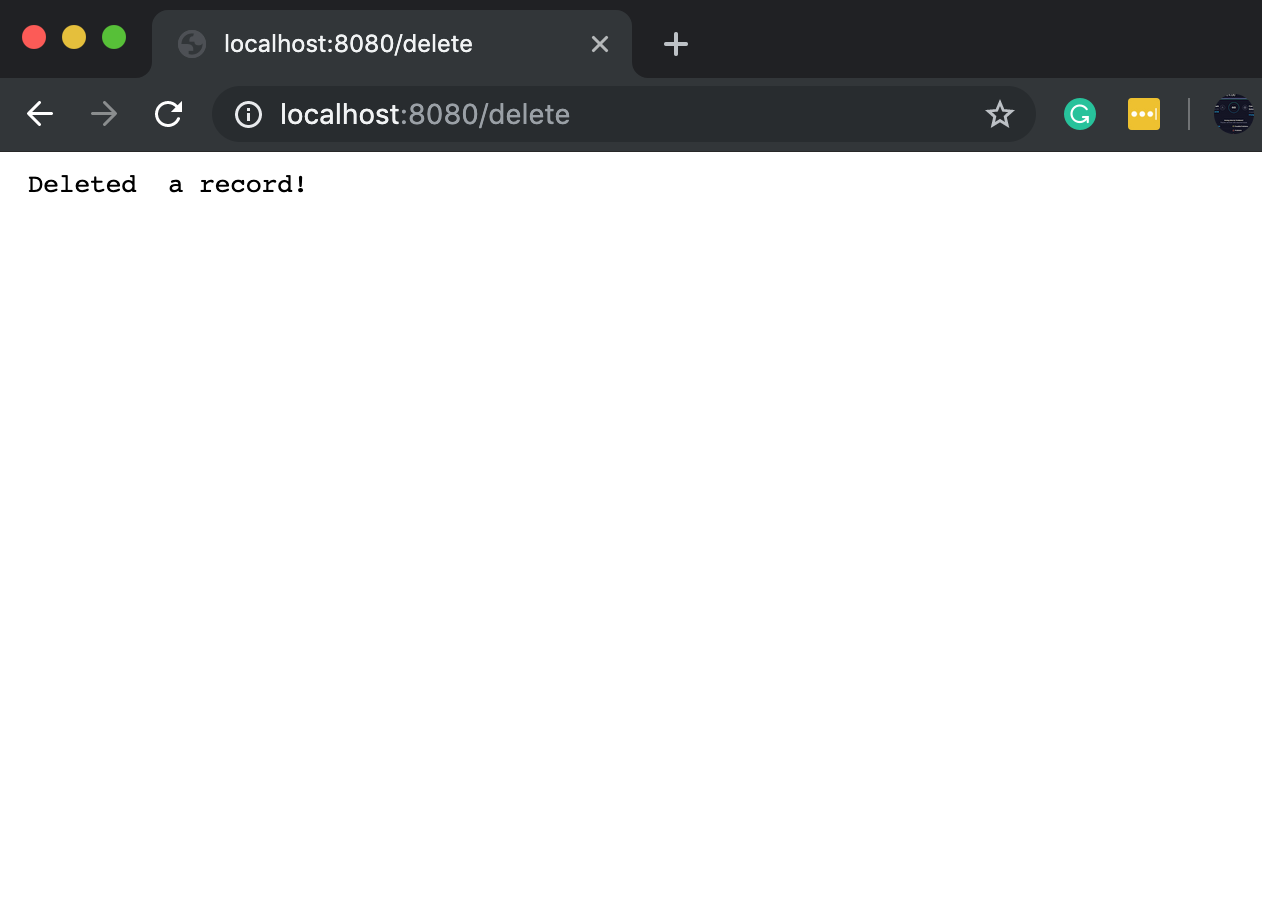 We can verify that we successfully deleted a record from the table tbldeletetest with an id of 1:

If you’re a Go developer and you want to interact with PostgreSQL in your scripts, it’s important to know how to execute basic database operations such as deletions. In this article, we showed you how to construct a web app with Go and PostgreSQL that can delete a specific record from a table. Using the code we provided as an example, you’ll be able to create your own GoLang scripts to delete rows from PostgreSQL when needed.

Shown below is the GoLang script needed to delete a record in its entirety: