PostgreSQL, the popular object-relational database management system (ORDBMS), has several powerful functions to assist application developers and DBAs in managing their data expeditiously. Among the most helpful functions in PostgreSQL is SQL RANK(). When you use it to query, you have the ability to separate the rows of the result response. Each row can be ranked in each partitioned group within the results set. It’s beneficial because you can obtain the data you need much faster and make insightful decisions based on the rows of ranked results.

This tutorial explains how to designate a rank to the rows within a query result using the RANK() function in PostgreSQL. Let’s get started.

PostgreSQL – Install it and any dependencies required.

More about the SQL RANK() function

To gain a better understanding, let’s go over some basics about how the RANK() function works.

An example of the function ‘RANK()’ syntax

Let’s review the details of the example shown above.

Examples of how the function RANK() works with tables

Designate ranks for the rows of the sample table

Explanations of the details of the ranking example

Another PARTITION BY subclause example to consider 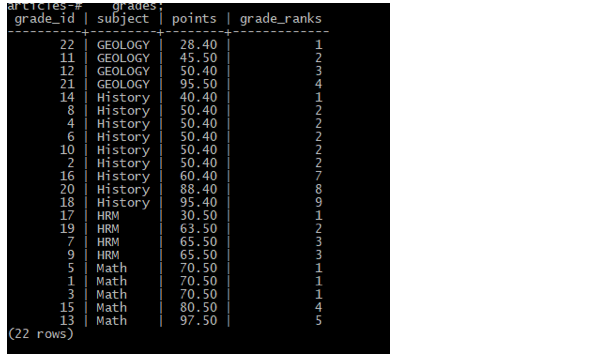 >NOTE: Notice that some rows have tied rankings. The total of rows per subject column may not reflect the number of rows within a partition when there are ties.

>To explain further, in the above sample, take HRM, for instance. There are four rows, yet for each of the last two HRM rows there is a ranking of “3.” This is because they are tied for 3rd place within the HRM subject column.

In this tutorial, you learned how to utilize the PostgreSQL function SQL RANK() so that you can make analytical decisions based on rank. The function allows you to partition results data in order based on the criteria you set, for example, column type and point values. Use the RANK() function regularly and uncover your important data upfront.