Contents
Introduction Clauses EXCEPT MINUS Conclusion

SQL Minus vs Except

In this article, we will be discussing the difference between “except” clause and the “minus” clause in an SQL database.

Some clauses in SQL can only be used with another clause and they usually enhance the functionality of the clause they are being used with. For example, the HAVING clause can only be used with a group by clause and it restricts the results of the group by clause on a condition. The FROM clause is mandatory with the SELECT statement to specify from which table the data needs to be selected. SQL EXCEPT clause:

In the real world, when we use the word except, we are defining an exception from what we stated in the statement preceding the ‘except’ and the statement succeeding describes that exception. For example, “I like all the fruits except oranges and jackfruits”. Now in this statement, “I like all the fruits” is the original statement but “oranges and jackfruits” are not included in the fruits the person likes. In SQL, EXCEPT works in pretty much the same way. EXCEPT is used to restrict the results from a SELECT FROM WHERE query on the query after the EXCEPT clause. The general syntax is:

Now, this syntax is identical to the one we use in the English language, so it is very easy to understand. It would give all the results of query A except those which are in query B too.

When the above code is executed, we get the following tables:

Now if we want to see which customers did not purchase anything, we can do that by: 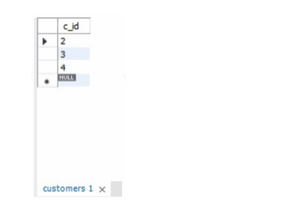 The except statement reduces to the result from the upper query to only those that are not in the lower query as evident by the output. The EXCEPT clause is not supported in all SQL databases. It does not work with MySQL and Oracle databases. Only PostgreSQL, SQL Server, and SQLite support the EXCEPT clause.

The syntax of MINUS clause is the same as the EXCEPT statement and it works in the same way too as it returns all the results from query A that are not a part of query B. So they have the same functionality.

For example, if we want to know the customers who did not purchase anything, we did that using the EXCEPT statement. Now we can rewrite the query using the MINUS clause.

This would give the same results as we got with the EXCEPT clause: 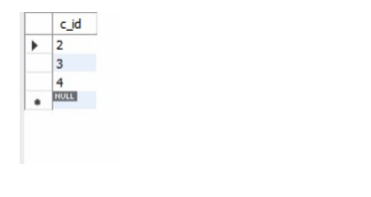 The MINUS clause is not supported by all SQL databases. It does not work in PostgreSQL, SQLite and SQL Server. It works in MySQL and Oracle databases.