SQL HAVING vs WHERE - What's the Difference?

Written by Data Pilot
July 29, 2019
Subscribe
Like
Have a Database Problem? Speak with an Expert for Free
Get Started >>

HAVING and WHERE clauses are used to filter rows resulting from select statement. HAVING clause is used to return the rows that meet a specific condition. Where clause is more of the same as HAVING but while it is used to filter through each row, the having clause filters grouped rows. Syntactically, the difference between the two clauses is that the GROUP BY clause occurs before HAVING clause while it occurs after the WHERE clause.

The HAVING clause is often used together with the GROUP BY clause when filtering the group of rows that do not meet some specific conditions. Below is an illustration of a typical syntax of a statement that is utilizing a HAVING clause.

Let’s have a look on a few examples using the Postgresql HAVING clause.

Then, we will run the SELECT clause together with the GROUP BY and the HAVING clause with the aggregate function SUM() as follows: 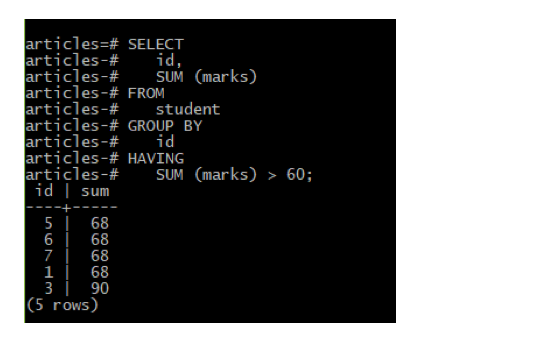 The results indicate the groups of id’s with the marks grater that 60 as indicated on the image above.

Examples of Postgresql WHERE clause

In our example, we sort for the details of the student whose marks are greater than 60 using the WHERE clause.

Let’s now look at an example using logical operator AND and LIKE conditions altogether.

Finally, we will look at an application of WHERE clause together with GROUP BY clause 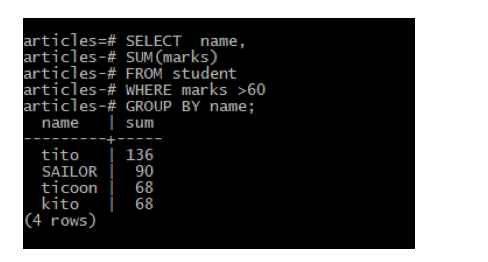 This query outputs the sum of marks for each student as entered into the student table based on the name of each student.

In this tutorial, we have focused on the differences and the application of the HAVING and the WHERE clause. We hope you can apply what you’ve learned to your application.