SQL EXCEPT vs NOT IN - What's the Difference?

Let’s start off by stating that EXCEPT is a clause and NOT IN is an operator. Now it begs the question, what exactly are clauses and operators in PostgreSQL:

Some clauses in PostgreSQL can only be used with another clause and they usually enhance the functionality of the clause they are being used with. For example, the HAVING clause can only be used with a group by clause and it restricts the results of the group by clause on a condition. The FROM clause is mandatory with the SELECT statement to specify from which table the data needs to be selected.

In PostgreSQL, EXCEPT works in pretty much the same way. EXCEPT is used to restrict the results from a SELECT FROM WHERE query on the query after the EXCEPT clause. The general syntax is: 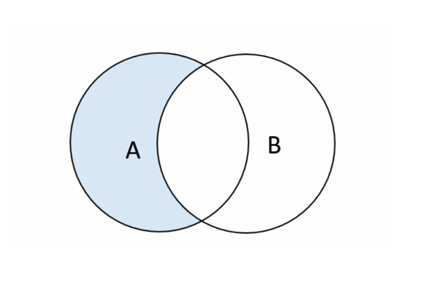 Now, this syntax is identical to the one we use in the English language, so it is very easy to understand. The above Venn diagram makes it even more clear to understand what exactly an EXCEPT clause will do. It would give all the results of query A except those which are in query B too.

When the above code is executed, we get the following tables:

Now if we want to see which customers did not purchase anything, we can do that by:

The EXCEPT statement reduces to the result from the upper query to only those that are not in the lower query as evident by the output.

Usually, logic operations are used as conjunctions between two queries. There are many logic operators in PostgreSQL. These include:

PostgreSQL NOT IN operator

The NOT IN operator is a combination of a NOT and IN operator. So we need to know first what is a NOT and an IN operation. The NOT operator reverses the meaning and functionality of any operator that succeeds it. It is also similar to what NOT is used in the English language. For example, “The room was empty” and “The room was not empty” have the opposite meaning. In the same way, NOT IN has entirely different meaning and functionality as compared to the IN operator.

When combined with NOT, the NOT IN operator checks if some value does not exist in some set of values. i.e. It returns all the results from the preceding values that are not in the succeeding set of values. Or we can say it limits the results of query A to only those results that are only in A and not in B. So we can say that it works the same way as the EXCEPT clause. It is just another way of achieving the same functionality.

For example, in the customers and orders database example, we found the customers who have not ordered anything using except clause. We can do the same using the NOT IN operator as:

This would give the same results as we got with the EXCEPT clause: