This is part one in a tutorial series explaining how to use Docker and Django Postgres in a web application. Django is an open-source, full-stack web framework written in Python programming language. It is designed to promote clean and practical design, fast development and provides support for several popular databases, including PostgreSQL. Docker uses OS-level virtualization to render software in packages referred to as containers. While the containers are separated from each other, they can communicate with each other and bundle their own libraries and configuration files. This tutorial will explain how to use Docker to setup a Django and PostgreSQL container for a web app. 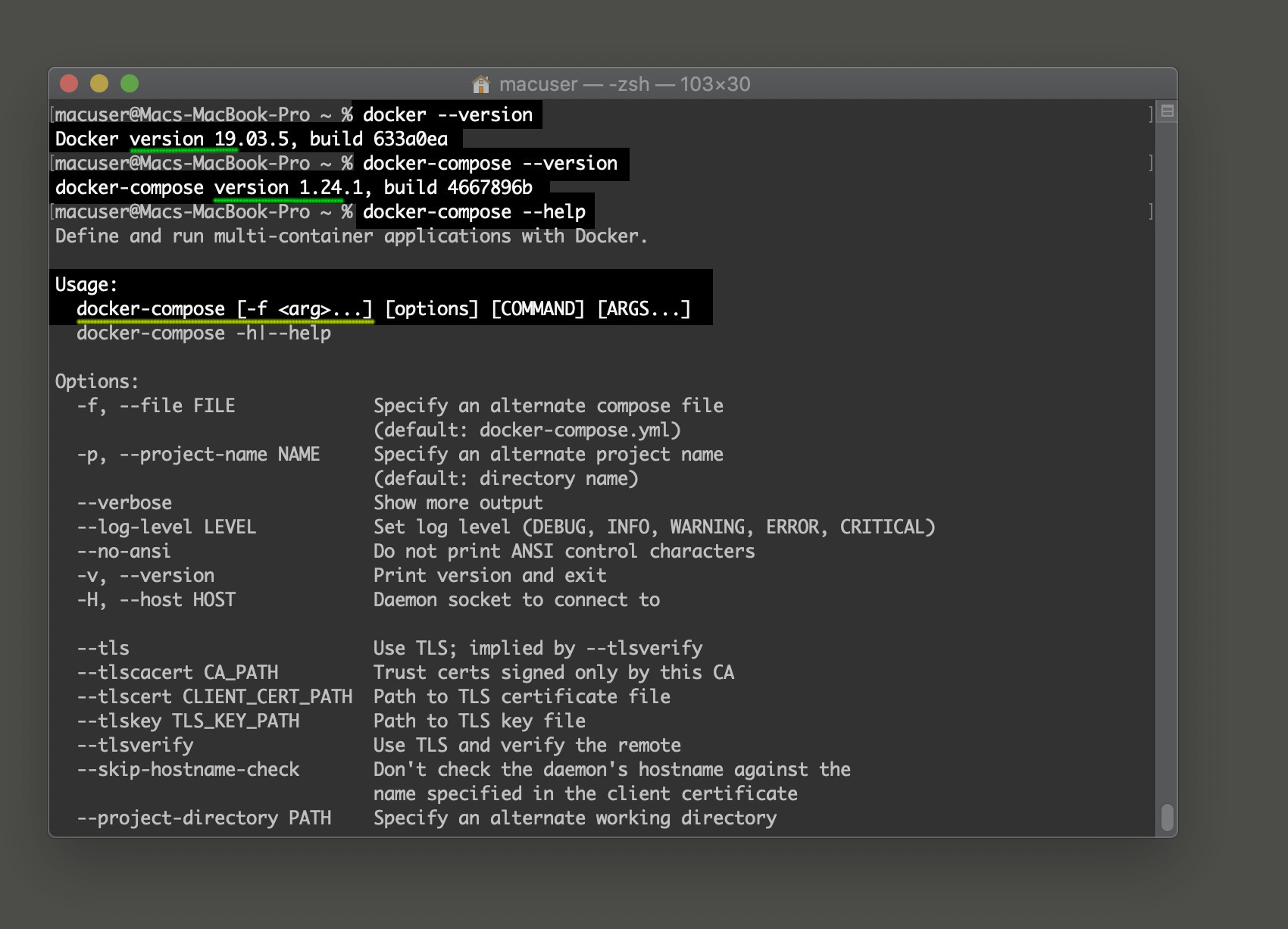 NOTE: Python 3 now has built-in support for virtual environments, and is recommend as Python 3.6 pyvenv has been deprecated in favor of venv.

Execute the following instructions if the Docker engine is not yet running.

Docker can be installed in Linux with just a few terminal commands. However, if using Windows or macOS, a login to Docker must be performed using a Docker ID, or by creating an account, before the installer can be download.

It should be noted that Docker Compose is included in the interactive installer packages for macOS and Windows. However, Docker Compose will require a separate installation on Linux.

On macOS, download a Docker.dmg interactive installer and then double click it to begin the installation, as shown on the below screenshot. Once it is installed and running, the program should respond to the docker commands in a terminal window. NOTE: The Terminal.app for macOS should be located in the Utilities sub-directory of Applications in a finder window.

For Windows applications, Docker can be downloaded here with an interactive installer as an executable (.exe) file. However, be aware Docker may not function on older unsupported versions of Windows, such as Windows 7 or XP.

As Docker was originally designed for Linux, the Docker Engine operates very well in Linux environments. However, the latest release of Docker Composer can be downloaded here. Once downloaded, just rename it and move the docker-compose-Linux-x86_64 archive to the /usr/local/bin/ directory with the following command:

On a “Fedora” flavor of Linux that uses the YUM repository, such as CentOS or Red Hat, execute the following yum install command to install the Docker CE Engine:

Lastly, execute the following command to install the Docker package:

Now the package must be added to the APT-GET repository list. The following command utilizes the lsb_release -cs command as a wildcard to install the appropriate package for the Ubuntu’s release name, such as bionic or xenial:

NOTE: The above command may not work on a machine or Linux OS that is not AMD64 compatible.

Now execute the following command to update the local repository in order to install Docker:

As of Jan 2020 the default Docker library is no longer compatible with Ubuntu 19. Use curl or wget to download the appropriate DEB packages for Ubuntu 19 and then install them using the dpkg -i command.

Execute the following wget commands to download the .deb archives for containerd.io, docker-ce-cli, and docker-ce:

Install the Docker packages with ‘dpkg’

Now execute the following command to install the docker-ce-cli CLI package before installing Docker CE in order to avoid any dependency errors:

NOTE: All of the packages must be installed in the specified order to avoid any dependency errors. First, create a project folder for the Docker files and the Django project. Use the following mkdir command to create a new project directory:

Now enter the project with the cd command.

Next, create a Dockerfile and docker-compose.yml file for the Django container. A simple way to do this is with the following touch command:

Make certain to save these files for building the Docker container later.

A Django project sub-directory must be created while inside of a Python virtualenv (venv). First, execute the following command to create a virtual environment directory to store the files for the Django project:

The directory should be created with the bin/, include/, and lib/ Python directories for the virtual environment.

Now change into the project directory using the cd command as follows:

Activate venv for the Django app

Execute the following source command to activate the virtual environment:

The (django-app) should now be visible in the terminal prompt indicating that the entrance to the virtual environment has been established.

If using the pip3 list command, notice that only a few bare bone Python applications are installed. Use the following pip3 install command to install Django and the psycopg2 adapter for Postgres:

The following django-admin command, used for managing and deploying Django projects, should now be working:

Use the django-admin startproject command to start a new Django project.

Supply the new project with a name and specify the path for the project using $PWD or . to create the path in the current directory. Note the Django project names don’t allow spaces or hyphens—but only allow underscores (_) and lowercase letters.

It make take a few seconds to update, but the name of the project as a new directory should be visible.

Now execute the following command to change into the new directory to modify the settings:

This should bring up a screen that resemble the following image: 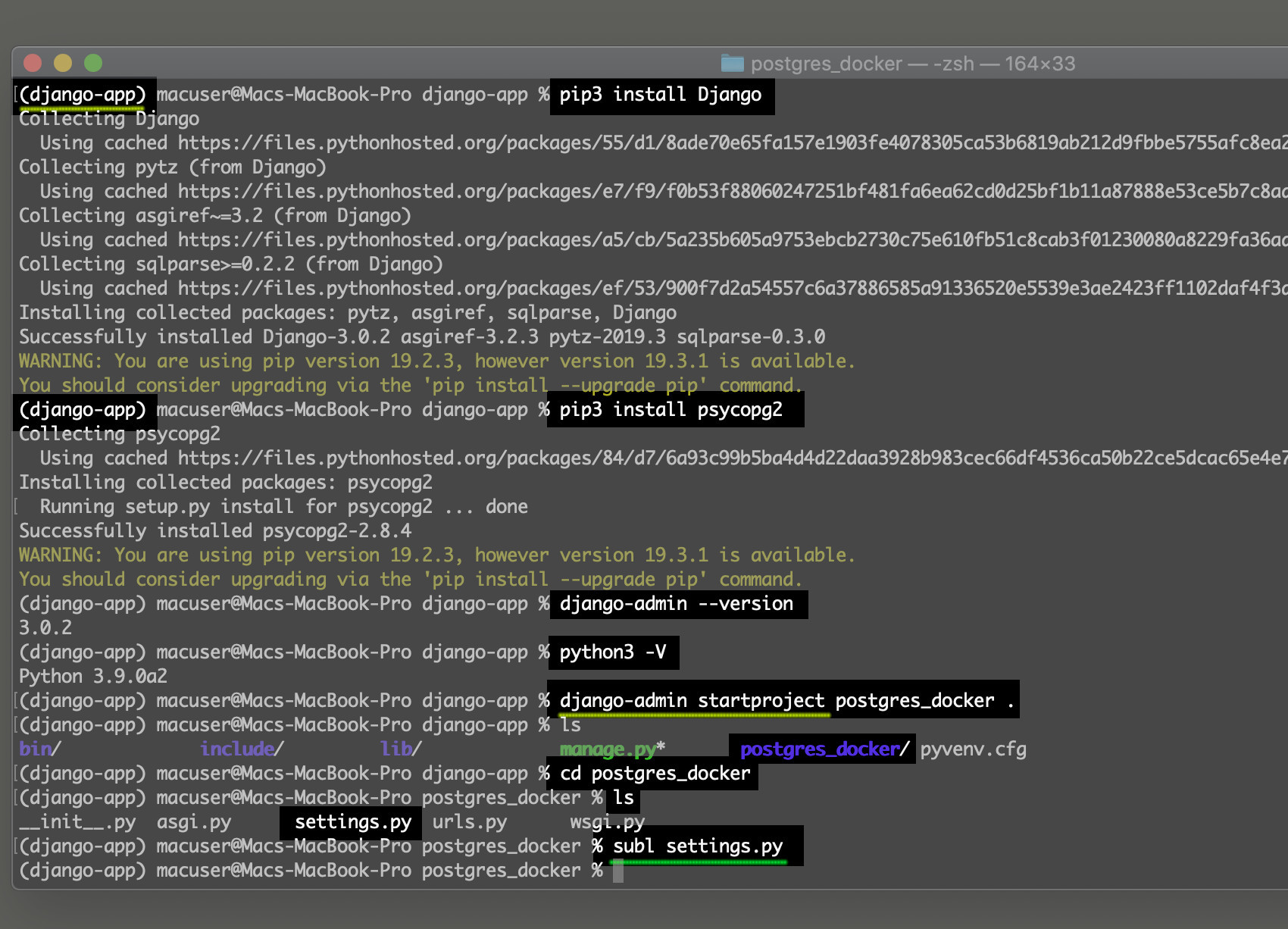 This was part one of a series explaining how to setup a Docker, Django and Postgres development environment with Docker and Django Postgres. Part one of this series specifically covered how to install Docker on Mac, Linux, Windows and Ubuntu, how to download the Ubuntu 19 DEB packages for Docker and how to install the Docker packages with ‘dpkg’. Part one also explained how to create both a Docker and a Django project. Remember that all of the packages must be installed in the specified order to avoid any dependency errors. Part two of this series will explain how to edit the settings.py file so the Django application will use Postgres instead of a MySQL database. A Docker container will also be ran that includes the Django project. Be sure all of the prerequisites are met before proceeding with part two of this tutorial series.