This is the second of a two-part tutorial series explaining how to build and run a Python and PostgreSQL docker container. The container is being designed to uses the psycopg2 database adapter for PostgreSQL and Python programming language to interface with the database. Part two will also explain how to use Docker Compose and Dockerfile to customize a PostgreSQL-Python image and use the PythonPIP package manager to install the psycopg2 Postgres adapter.

Open a terminal or command-prompt window on the host machine and execute the following command to confirm Docker is installed and running:

Part one of this series created a Docker container with docker run and then entered into the container using the docker exec -it command. This was done in order to create a PostgreSQL table and sample records in a bind-mounted volume for persistent data.

If the steps in part one of this series have not yet been completed, a table must first be inserted and records added into the Docker container’s bind-mounted volume.

IDE for Python and YAML

Confirm access to a text editor or IDE that has both YAML and Python syntax as well as indentation support. While the examples in this tutorial use the Sublime IDE, other editors like Atom IDE or Visual Studio Code that uses the code command will work as well.

A Docker Compose file will be used to set up the container and specify such things as the bind-mounted volumes and port mapping.

Create a Docker-Compose file for the Postgres container

Change into root of the PostgreSQL-Docker project directory and create a new Docker compose file.

Following is an example of how to create a new file in a UNIX-based terminal using the touch command:

The following command can be used to edit the new file with the Sublime IDE:

Note that the .yaml file extension can also be used in above command.

The Docker Compose version must be specified at the top of the YAML file. As shown in the following command, version "3.2" should work for the most recent stable releases of Docker:

NOTE: Typically, releases of Docker Engine 17 or newer will use a version string of "3.x" or greater in the Docker Compose file.

The above YAML markup will instruct Docker to map the host port to the default Postgres port of 27017 and set the PostgreSQL environment variables. Note that the relative location for the Dockerfile must be specified under the context: key.

The last part of the YAML mark sets up the network so the container will run on an IP address of 172.28.1.4:

NOTE: Make certain to save the changes made here before moving on to the Dockerfile.

Execute the following command to open an instance of Dockerfile in the Sublime text editor:

NOTE: The Dockerfile name cannot have a file extension after it.

The following commands will pull the latest image for postgres, if needed, from the Docker hub repository, including a “bare bones” distro of Debian Linux.

Execute the following code to install Python 3 and its PIP package manager:

Now use pip3 to install the psycopg2 Python adapter for PostgreSQL. This will allow for the retrieval and modification PostgreSQL table data stored in the container’s volume.

Execute the following command to install the psycopg2 Python adapter:

In the final part of the Dockerfile, the following command is executed to set up the Postgres volumes, add the postgres admin role and expose the port for the Postgres service:

Now save all of the changes made to the file and then open a terminal window at the project’s root directory where the docker-compose.yml file is located.

Execute the following command to spin up and build the Docker container using the specifications laid out in the Docker files:

NOTE: If a bind mount error is received because the specified port for Postgres is not accessible, use the sudo lsof -i -P -n | grep 5432 command to search for the cause of the error and then pass the PID (Process ID) to the sudo kill -9 command to fix the error.

While waiting for the container to build from Docker Hub’s postgres image, begin working on the Python script for the RESTful API calls to the container’s bind-mounted Postgres database.

Python script in the app folder

Execute the following code to create a new Python script in the python-app directory on the host machine that is bind-mounted to the container’s volume:

Now paste the following Python code into the .py script, making certain to save it in the directory specified under volumes: in the Docker Compose file: 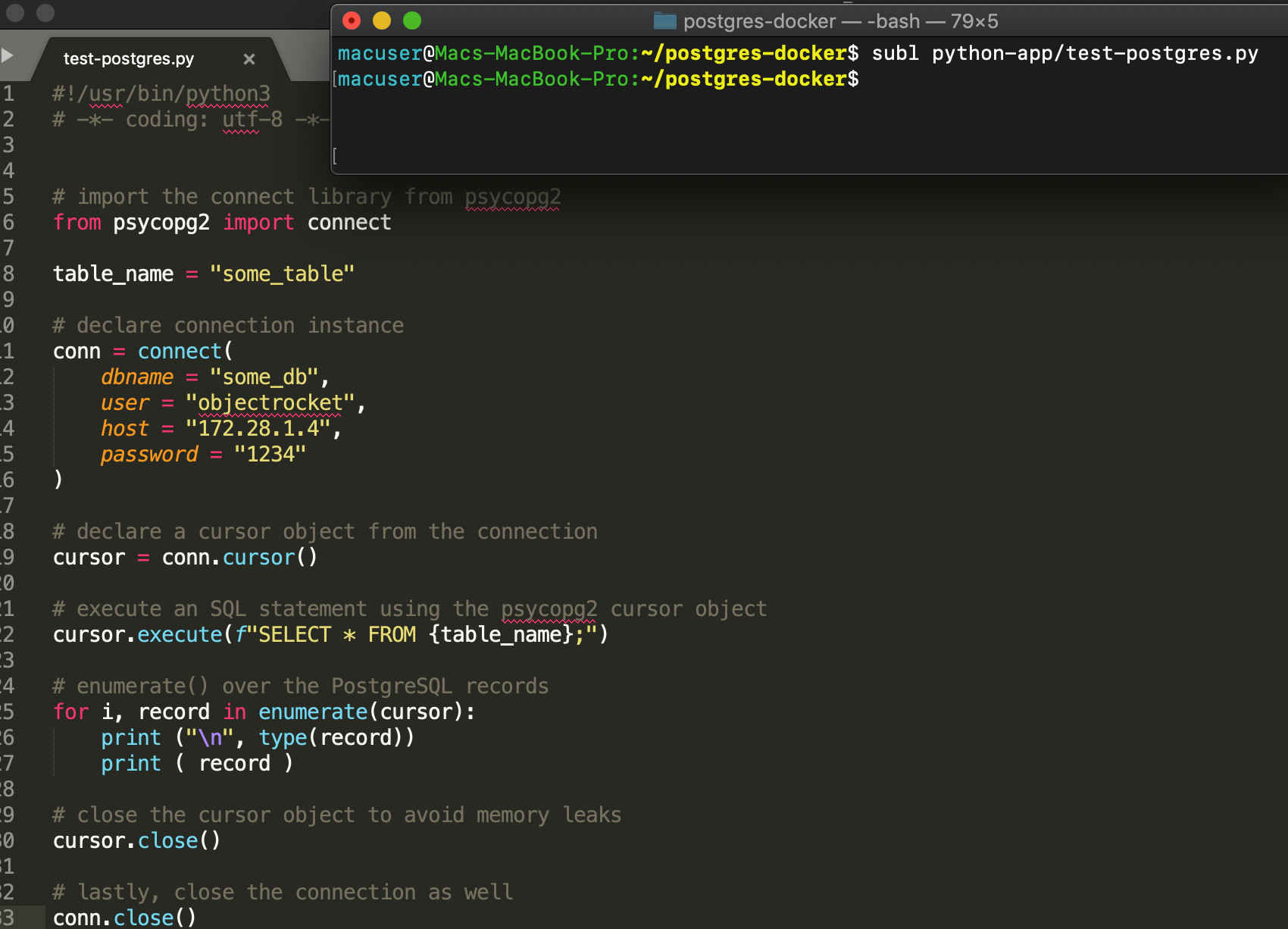 The container should run as a foreground process in the terminal window after it has finished building and installing Python. Open a new terminal window, or a new tab in the terminal, and use the below docker exec command to connect to the container interactively as explained in part one of this tutorial series. However, the container ID must first be obtained by using docker ps. Once the ID is obtained, use the first three digits of the alpha-numeric ID to execute the following interactive TTY session with the running container:

Once inside of the container, input python3 -V and psql -V to verify that both Python 3 and Postgres are working properly, as shown here: Execute a pycopg2 Python script in the container

Navigate to the /var/www/html directory inside the container where the Python script should be visible. Now use the python3 command to execute the script from the terminal.

The Python code should return the PostgreSQL records stored in the container’s volume. Assuming Python and the psycopg2 adapter are working properly on the host machine, those records should be accessible outside of the container by changing the script’s host to localhostas shown in the following screenshot: 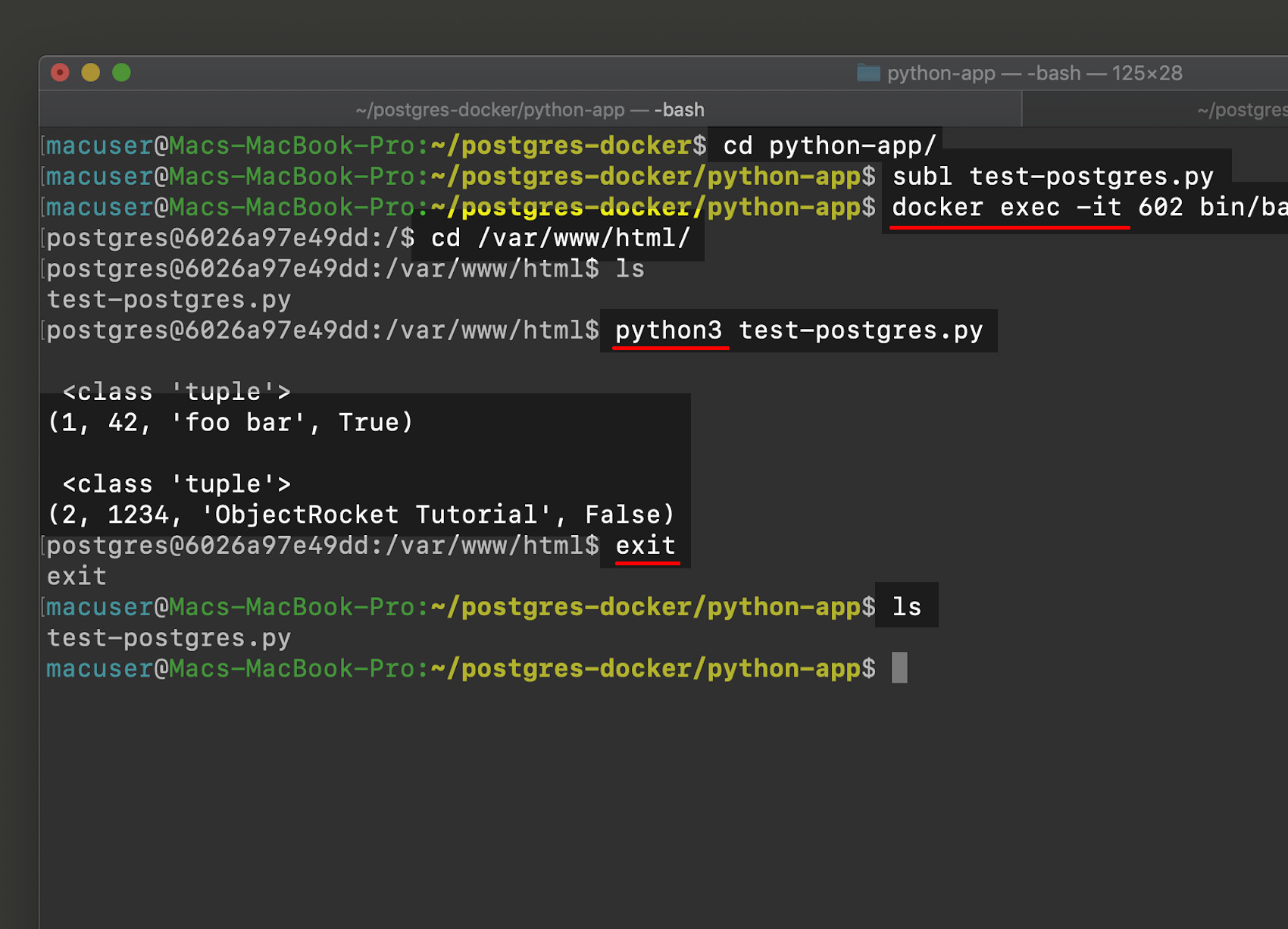 Now type exit into the terminal to leave the container and then input docker-compose down from the root directory of the project to shut down the container.

This was part two of a tutorial series explaining how to build and run a Python and PostgreSQL docker container. This second part of the series covered how to use Docker Compose and Dockerfile to customize a PostgreSQL-Python image and use the PythonPIP package manager to install the psycopg2 Postgres adapter to make API calls to a Postgres database in Python. It is critical to remember that the Dockerfile name cannot have a file extension after it when executing the command to open an instance of Dockerfile in the Sublime text editor.