This is the second part of a tutorial series providing psql examples. Pat two will pick up where part one left off, explainging SQL statement and query examples for the psql command line interface for Postgres. Part one covered how to install Postgres and psql on various operating systems and provided psql examples. Part two will cover how to insert and modify records and provided clause examples.

Now enter the following psql command in a terminal or command-prompt window to access the interface:

This should now allow the command-line interface to carry out PostgreSQL queries and modify data.

The first part of the series covered how to install and access the psql CLI for Postgres and create databases and tables. This section will cover how to INSERT records and modify the record data on the Postgres tables.

First, check all of the available tables on a selected database.

Note, however, that using the above SELECT statement will return all of the system tables, and not just the user-created ones.

The following != operator can be used to exclude certain tables by comparing a string to the built-in schemaname SQL value for pg_tables:

However, a better way is to use the following NOT LIKE clause with the % wildcard to further restrict the records of table names returned by the query:

Additionally, multiple NOT LIKE clauses can be used in the query by using the AND operator as follows:

This is shown in the following screenshot: 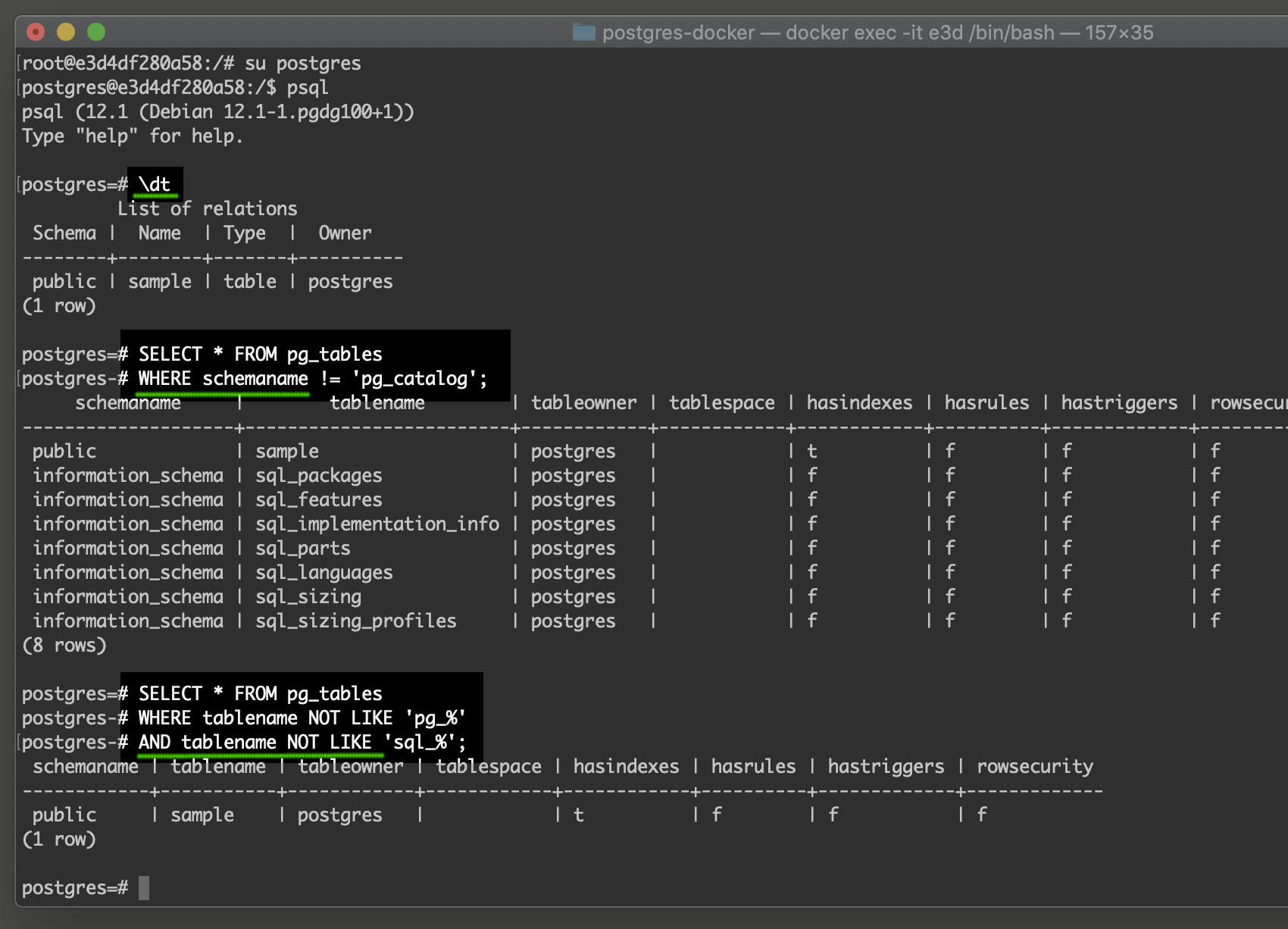 NOTE: The % wildcard at the end of the string in the above command instructs psql to exclude any table that starts with pg_ or sql_.

Following is a SQL statement that will drop an old Postgres table that is no longer needed:

The results from the above command should be: DROP TABLE.

The following example shows how to insert data into the table:

The above SQL insert statement should return: INSERT 0 3.

Be certain to always add an INSERT INTO statement followed by the table_name to insert data into the PostgreSQL table. Create all of the columns separated by comma (,) and indicate the VALUES that are entered as the data records.

Following is an example on how to select data in PostgreSQL. The asterisks (*) in the following SQL example tells psql to query all of the documents in the Postgres table called sample:

Use the WHERE SQL clause in conjunction with SELECT FROM command to pass a condition that will restrict the Postgres records being returned.

In the following example, only records from a table that have an ID number that is greater than or equal to 2will be returned:

The above SQL statement should only return the following two records:

Use the Postgres ‘ORDER BY’ clause to sort

There are many ways to display the data returned by the table. For example, use the SELECT statement to return and display the data of the PostgreSQL table. Additionally, the sort command can be used to put the rows in a specified order.

The following example uses the ORDER BY command:

The above command should produce the following results:

Here are the results displayed in a screenshot: 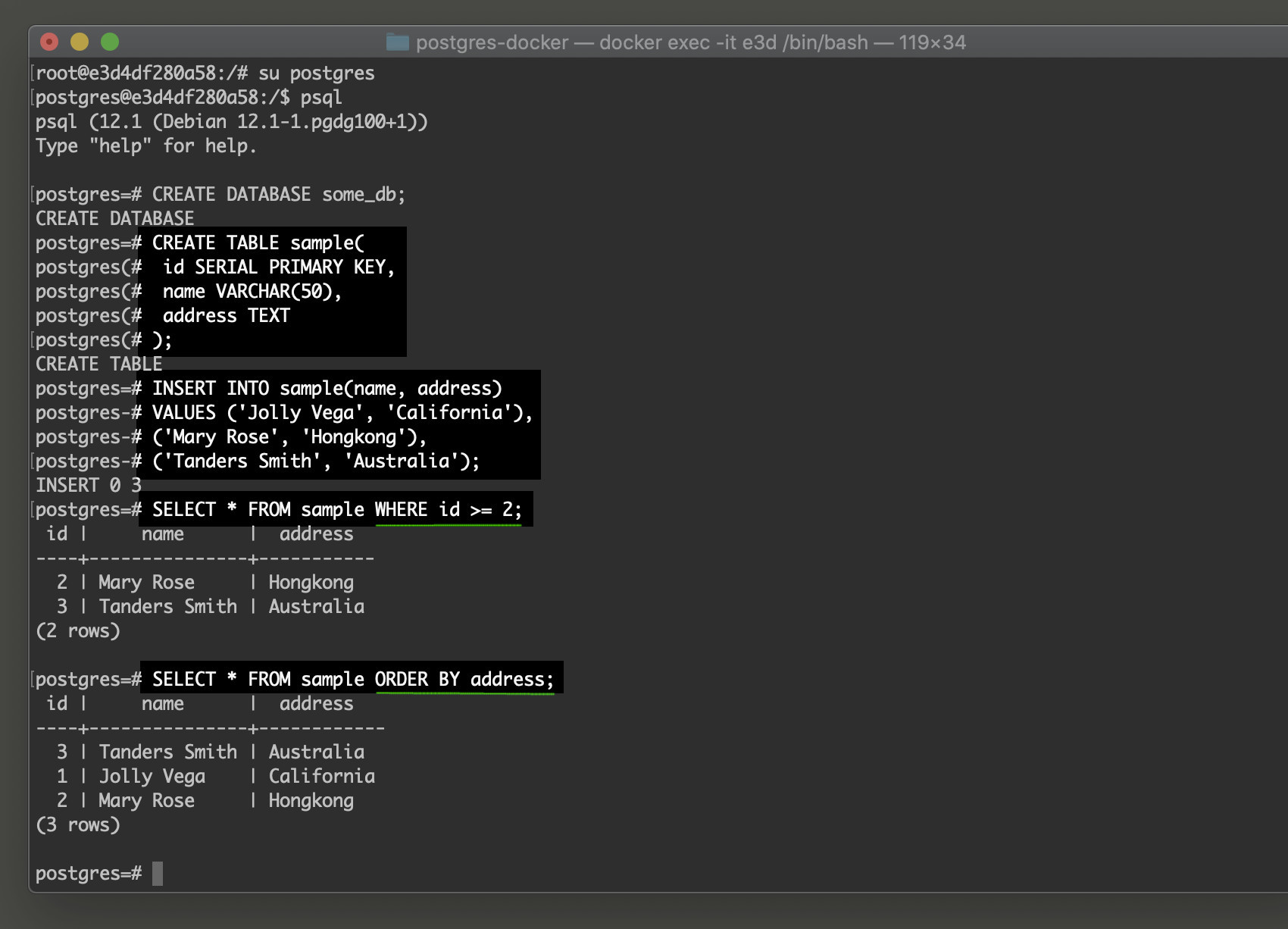 Another example using the SELECT statement is to execute the WHERE clause to filter the table rows as follows:

The above command should return results that resembles the following:

The following example shows how to update a record in PostgreSQL:

The above UPDATE statement should produce an UPDATE 1 response.

Following is an example on how to delete a record in PostgreSQL:

Since the table has a UNIQUE key constraint, the above command should delete only one record and return the following response:

Use psql to delete all records from a table

The simplest way to delete all of the records in a PostgreSQL table is to use the TRUNCATE TABLE keywords followed by the table name, as shown here:

The system should respond with TRUNCATE.

Here the system should respond with DELETE followed by a number representing the total number of records contained in the table.

This was the second part of a tutorial series providing psql examples on how to execute the psql examples in Postgres. The article specifically covered how to INSERT records and modify the record data on the Postgres tables. The tutorial then provided examples for list tables, the ‘NOT LIKE’ clause and ‘DROP TABLE’ commands, provided insert and ‘SELECT’ examples, the ‘SELECT WHERE’ clause and the ‘ORDER BY’ clause. Part two then provided update and delete examples. Remember to always add an INSERT INTO statement followed by the table_name when inserting data into a PostgreSQL table.