Memory Management with the Psycopg2 Adapter for PostgreSQL (Part 2)

Memory management in the psycopg2 Python adapter for PostgreSQL

A running Python script using the psycopg2 adapter for PostgreSQL can cause some memory issues if you fail to take certain precautions or setup your app correctly. The following article will provide some tips to help you better manage your psycopg2 application’s memory and system resources. This is part two of the memory management in psycopg2 article series.

NOTE: PostgreSQL also has a memory management library called SPI you can connect to to assist in streamlining your psycopg2 Python application’s efficiency.

Prerequisites to using the psycopg2 adapter for PostgreSQL

Install the psutil for library for Python 3

Some installations of Python may not come with psutil pre-installed. You can use the pip3 list command to check what packages are already installed, or use the following command, in a UNIX terminal, to install it:

Or you can also install it with just the pip3 install commands, like in the following example:

Create a Python script and import libraries to connect to PostgreSQL

The following Python code imports the psycopg2 adapter’s sql and connect libraries, as well as the psutil, sys, and gc libraries to help manage your system’s memory:

Declare a string for the PostgreSQL table name and SQL statement

Declare a string for the PostgreSQL table name so that it can be inserted into a SQL statement string concatenation later:

The following code uses the LIMIT SQL keyword to restrict the number of records returned. This will help to reduce the application’s memory use in the case fetching records from extremely large PostgreSQL tables:

Python’s with statement allows you to execute a block of code, inside of an indentation, in order to close all of the objects within it, and free up those resources, after the code has been executed.

Connect to PostgreSQL inside of a ‘with’ indentation

NOTE: Make sure to pass the correct parameters or else PostgreSQL will raise an error.

Use the ‘with’ and ‘as’ Python keywords while using PostgreSQL cursor

The next step is to nest another with indentation code block in order to create a cursor object, and execute the SQL string declared earlier, inside of the connection indentation:

NOTE: It’s recommended that you use the sql.SQL() and sql.Identifier() methods, instead of just passing a concatenated string to the execute() method, to help prevent SQL injection attacks.

Setting the cursor’s name attribute to

Psycopg2 will load all of the query into memory if a name isn’t specified for the cursor object. Here’s an example of how you can do that to reduce how much memory the application uses:

You can also reduce the cursor’s itersize attribute (default value is 1000) to help save on resources by reducing the batch size of each fetch iteration:

Call the psutil function while executing a PostgreSQL statement

Execute the sql.SQL object by passing it to psycopg’s execute() method. Now you can call the get_avail_memory() Python function (explained and constructed in part one of this series) inside of the nested with indentation block to get an idea of how much memory the PostgreSQL app is using:

Save the code and then execute the script using the python3 command followed by the script name. You should see a response in your terminal or command prompt window that looks something like the following: 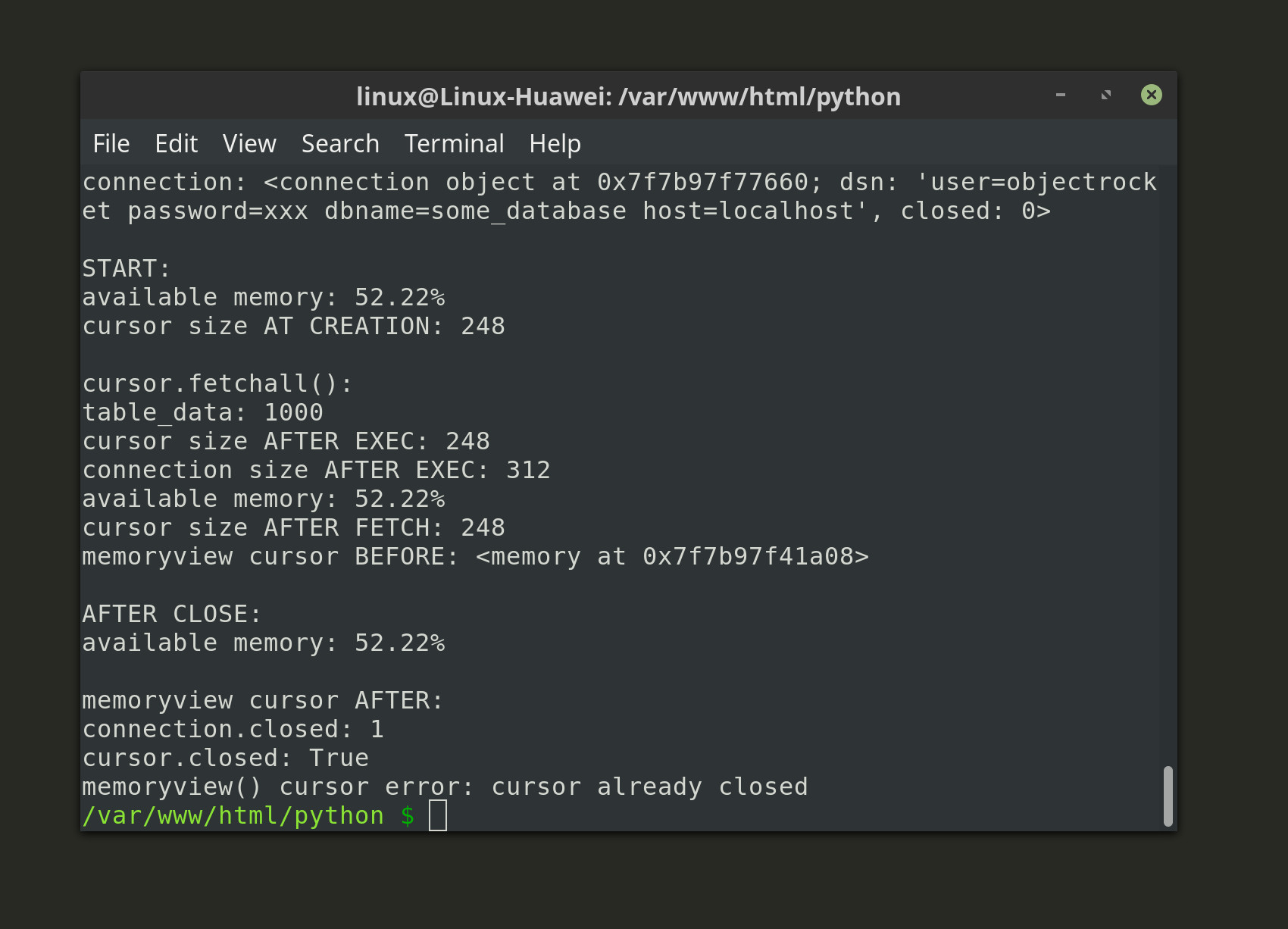 At this point you should have an arsenal of tip and methods you can use to better manage your system’s memory and resources while running a psycopg2 PostgreSQL application. Check out part 1 of this article series for a more general overview of memory management in Python.