This tutorial will explain how to perform an INSERT operation against a PostgreSQL database table with the JDBC to PostgreSQL. The Java Database Connectivity API, typically referred to as JDBC, driver is software that allows a Java application to connect and interact with a database. The JDBC driver establishes a connection to the database and executes the protocol for transferring data between the client and database.

Prerequisites for Connecting JDBC to PostgreSQL

How to Create a Sample Database

This section will explain how to create a sample database that will be used in this tutorial.

First, login to the PostgreSQL server and create a database with the following command:

Now connect to the database with the PostgreSQL meta-command \c followed by the database name, such as: \c cars;.

Next, create a table named tblcars with the following commands:

An INSERT operation can now be performed by executing the following commands:

With a sample database created, insert a record into the PostgreSQL database from a Java application by executing the following steps in order:

Connect to PostgreSQL server via the Java application.

First, a function must be created to connect to the database. This function is composed of the connection string, the name of the user and the user’s password. To accomplish this, execute the following code:

Once the important details of the connection are identified, the details can then be used within the getConnection() method of the class DriverManager to make a connection to the PostgreSQL database server.

Next, create a dbcon() function that will call up the connection details, created in the previous step, by executing the following commands:

Now press CTRL + F11 on the keyboard. The results displayed in the console should resemble the following: 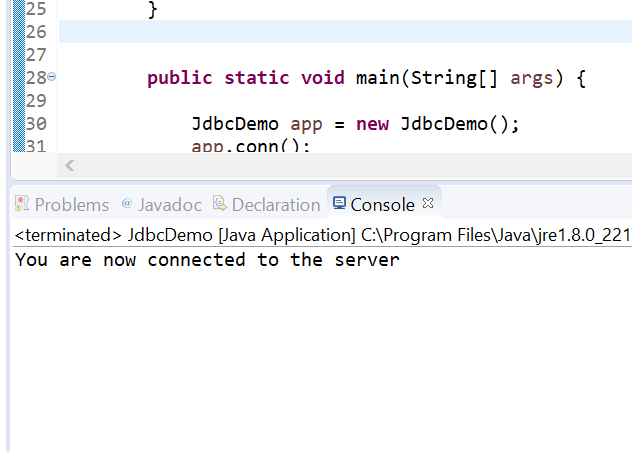 Next, create a Java Bean that will allow access to the attributes that will be defined in the below section. First, though, create a new Java class using the following code:

The above code creates setters and getters that can be used to access the Java application.

The following code will perform an INSERT operation that will return the value of id, and can also be used for other purposes:

The above code will get the auto generated ‘id’ given to the newly inserted record.

Now test it by running the application. The results should resemble the following:

Note that the value of the ID of “5” of the newly inserted record was retrieved. A basic SELECT operation against the PostgreSQL database, via the shell, can also be performed.

Below is the entire working code that we used in this article.

Code of the Java Bean – Car

The working code for our Java Bean.