Written by Data Pilot
October 14, 2019
Subscribe
Like
Have a Database Problem? Speak with an Expert for Free
Get Started >>

This tutorial is the fifth part in a series explaining how to create a JAVA PostgreSQL web application with various databases, including ECLIPSE, Spring, Hibernate and Tomcat. This series is designed to help build a web application, from scratch, that will interact with these databases. Part five of this series will cover some of the code needed to make the application possible, including the Java PostgreSQL Web Application repository interface. Be sure to have a thorough understanding of the previous four sections of this tutorial before proceeding.

First, a package for the interface must be created. Right click on the “src” folder and then select “New.” Now select “Package” to open the new JAVA package window. As shown in the following image, the package is named “com.chinito.carsmanager.dao”: 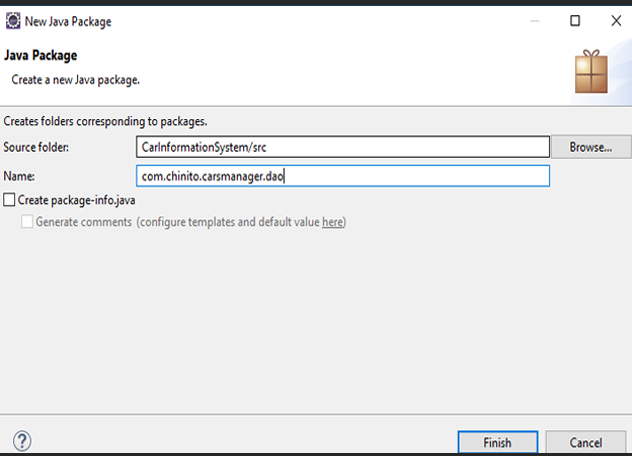 After creating the package, right click on the package and then select “New.” Now, as shown in the following screenshot, select “Interface,” and then provide the name CarsRepository for the interface: 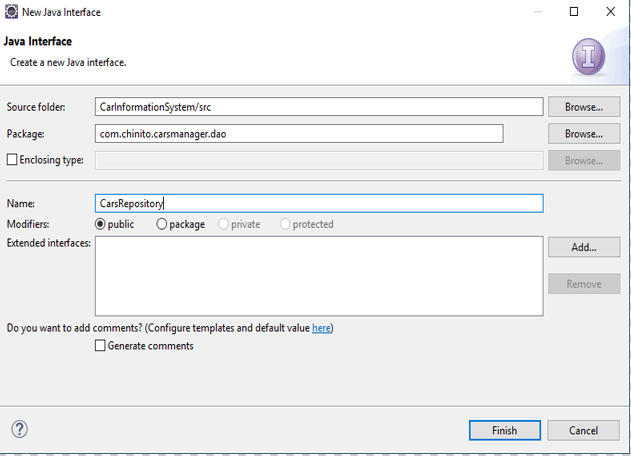 Now click the “Finish” button to create the interface.

The JAVA code for the interface follows:

Note the above code is almost none. This is because the Data Access Object, or DOA, is not coded in Spring Data JPA.

It is important to note that the implementation of codes are automatically generated at runtime by the Spring Data JPA. The type of the primary key field must be specified whenever the interface CrudRepository is extended. In this case it would be CrudRepository<cars, ineteger="Ineteger">.

First, a service class must be created inside the same package as the repository interface and given a meaningful name. Now click the “Finish” button, as shown below, to create the JAVA class: 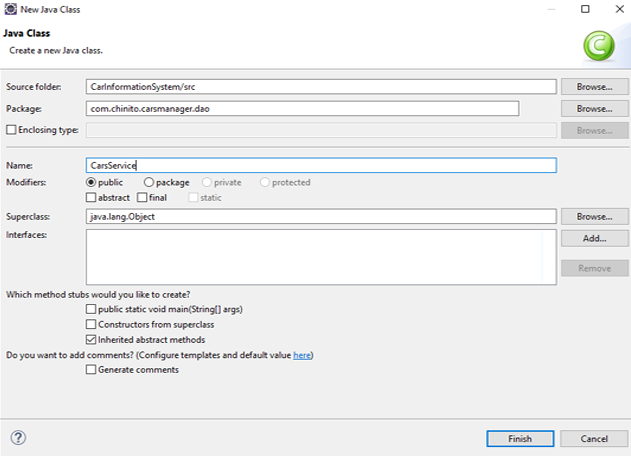 The code used for the business logic follows:

Here is a breakdown of the above code:

The @Service annotation is used to clearly specify the intent of this class after the method has been detected by Spring Data JPA.

The @Autowired CarsRepository carsRepo is used to handle the automatic generation of the implementation code at runtime. This code simply assigns the function call to the CarsRepository object carsRepo.

While this class may seem redundant, it is essential for the application to decouple the DAO layer and the service layer.

This section will review the controller class of the web application that was created in the second part of this tutorial series, located here: Java and PostgreSQL web Application PART 2.

Remember that this controller class will handle any and all requests coming from the users.

The new code for the class controller follows:

This tutorial was the fifth part in a series explaining how to create a JAVA PostgreSQL web application with several different databases. This article explained some of the code needed to make the application’s function possible, specifically the coding the Java and PostgreSQL web app’s repository interface, the web application’s service and controller classes and a broken-down explanation of the code. It is important to remember that the DOA is not coded in Spring Data JPA. The next part of this tutorial series will cover the creation of the handler methods.