Written by Data Pilot
January 21, 2020
Subscribe
Like
Have a Database Problem? Speak with an Expert for Free
Get Started >>

This is part two of an article series that demonstrates how to load JSON data from a file and convert it into Python objects that can be parsed and formatted into an SQL-compliant string that, when executed, will insert record data into a PostgreSQL table. In this article you’ll learn how to use Python to open a .json file in order to read and parse its data in order to create the SQL string.

You will need a stable version of Python 3 installed (the code in this article has not been tested on Python 2.7), and you’ll need to install the psycopg2 Python adapter for Postgres as well if you intend on executing the final SQL statement.

Execute the following bash command in a terminal or command prompt window to instruct PIP to install the adapter:

In the last article of this series we created some JSON data that the code can use to parse and format. Make sure you have some JSON objects in an array that can be used as Postgres table data before attempting to use the examples found in this article.

In part one we created a Python script and imported the following libraries to help read, parse, and insert some JSON data into a Postgres table:

Use Python to read a JSON file

The following example code will open a .json file and render the data as Python objects using the json.load() method call with open():

NOTE: To convert a JSON-compliant string into Python objects use the json.loads() method instead. The “s” at the end of loads stands for “string”.

Use the following code to evaluate the object returned by json.load() to verify that it’s a list and let’s grab the first potential Postgres “record”:

Now let’s use the Python dictionary’s keys() method to retrieve its “column” names in the form of a list:

You’ll need that column data later when concatenating the INSERT INTO SQL string. Here’s another way you can get the column names using a one-liner:

Let’s start by declaring the string for the SQL statement. The following code will declare the string and put the table name and joined column names into it:

NOTE: Make sure that your Postgres table name doesn’t use any spaces or hyphens.

The above example code will insert a table name value into the string using Python’s format() function, but be aware that this only works in Python 3.

This next part is the “meat and potatoes” of the script because it’s the part of the code that will parse the Python dict objects, containing your Postgres record data, and it will format and append them to the string in a manner that will keep it SQL-compliant.

This first example enumerates over the list of dictionaries (Postgres records) and each of their respective values, and then casts each value as a SQL-compliant string before joining them together:

The above code evaluates each piece of record value and it will format it properly if it’s a string before appending it to a new “values” list.

The last step is to enclose each record’s values in parenthesis, after joining them together, and finally append a semicolon at the end of the SQL statement:

Another Python and JSON parser example

You can also just put all of the values into a nested Python list using this one-liner:

NOTE: Since version 2.5.4 of the psycopg2 library there’s now better JSON support with the implementation of its Json adapter. In a terminal or command prompt tab you can use the pip3 list command to have PIP return all of its installed Python packages so that you can view their respective version numbers.

The above code will append each joined value list to the values_str object which you can combine with the column and table name to complete the SQL statement using the following string concatenation:

The above code uses the %c placeholder to insert values into the SQL string including the table name and column names.

If you just want to output the results to the terminal use Python’s print function to see how the string turned out. Put the following code in the end of your script to have Python output the results of the concatenated SQL string to a terminal window:

This next part of the Python code is optional since you may want to inspect or alter the SQL string output before having psycopg2 insert it.

Code for psycopg2 to connect to Postgres

If you want to execute the SQL string in the script instead you can append the following example code that uses the psycopg2 library to connect to a PostgreSQL database:

Use psycopg2 to insert JSON data

Once you’ve created a connection you can use the psycopg2 library’s execute() method to insert the JSON data by executing the string and commiting the transaction:

When the script is complete you can then save the code and run it by passing the script’s name to the python3 command in a terminal window: 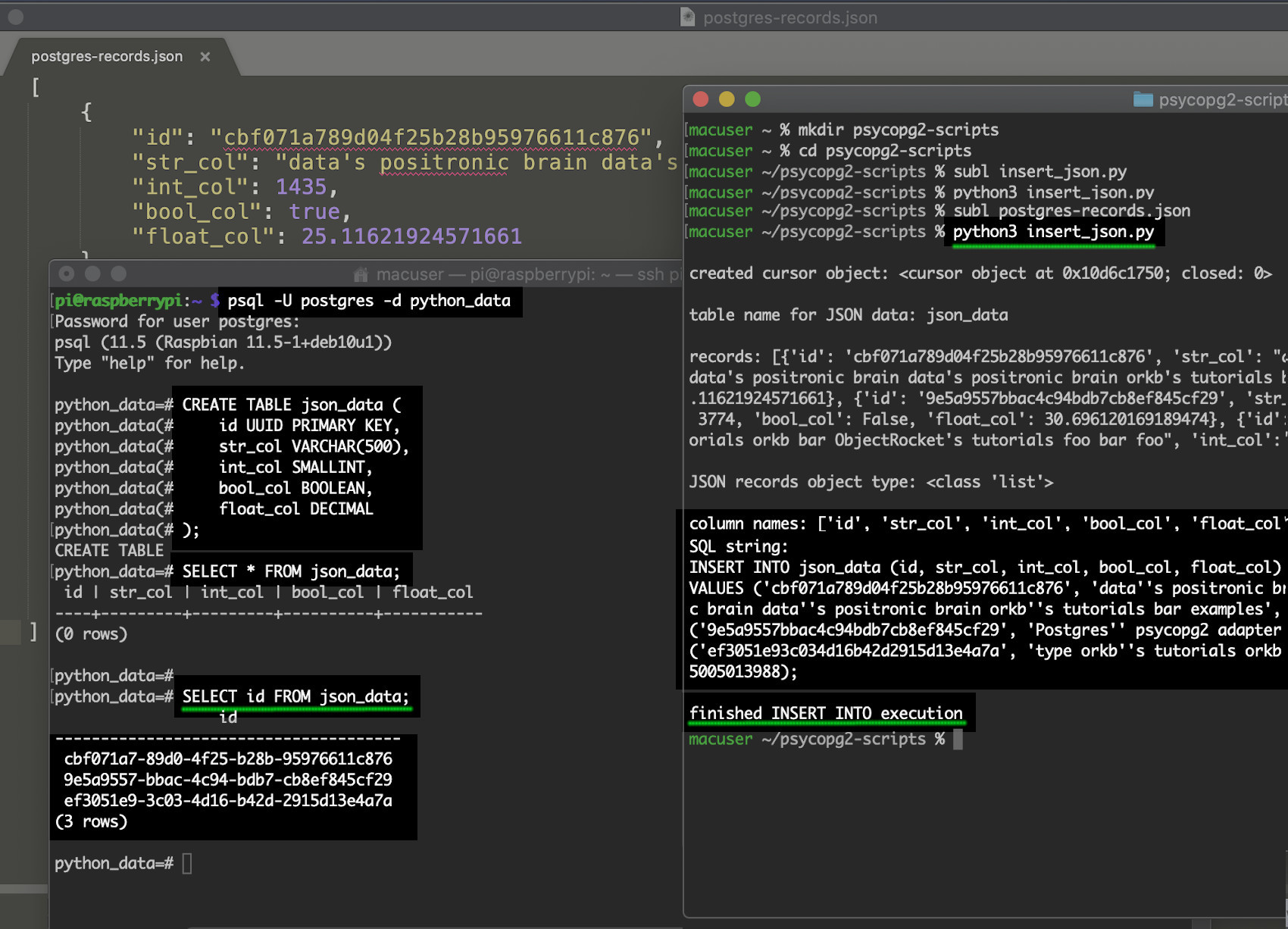 If you want to remove all the inserted records from the Postgres table you can execute a TRUNCATE SQL statement in psql, followed by the table name, and all of the records will be deleted.

You should now have some Python-generated SQL for your Postgres table! Depending on how your source JSON data is constructed, the final SQL string returned by the script should look something like this:

If you’d like to save the script’s output to a file just append the following Python code to the end of your script:

NOTE: The 'w' file mode will simply truncate and re-write data to the .sql file every time you run the script, but you can also use the 'a' mode to append data to the end of the SQL file instead.

Here’s the complete code you can use to load JSON from a file and convert it into a Postgres-compatible SQL string for the purpose of inserting records into a table:

Here’s another example that uses the Json library (from psycopg2) to convert string data into an SQL-compliant string, and it loads the data from a string within the script instead of opening a .json file: