How to Delete Postgres in PHP

Written by Data Pilot
February 28, 2020
Subscribe
Like
Have a Database Problem? Speak with an Expert for Free
Get Started >>

The PHP PDO API is actually three separate acronyms that stand for hypertext preprocessor data objects application programming interface. While that certainly is a mouthful, the PHP PDO API function is easiest explained as an application that interacts with object relational database management systems. One of its functions is the updating of information on various SQL systems, such as Postgres, by using a simple PHP script to connection to Postgres. This tutorial will explain how to delete Postgres in PHP via the PHP PDO API and provide working examples.

This section will explain how to enable the Postgres PDO_PGSQL driver in the current PHP distribution by editing just one line of code.

Locate the following text in the php.ini extension sections and remove the beginning character, the semi-colon (;), as shown here: 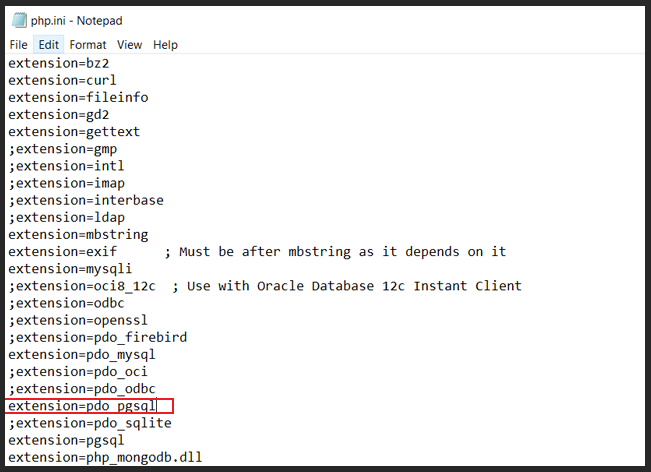 Now execute the following steps in Composer to create the project structure file:

Now edit the composer.json file by appending the following script:

Note that the above script works to create a mapping for the ‘app’ directory for the phpdeletepostgres namespace.

Next, navigate to the project directory via the command line and execute the following command:

Composer will download the required libraries as declared inside the composer.json file and generate the autoload file and a new directory called “vendor“.

Note that since no libraries were defined in the composer.json file, only the auto-load files will be generated.

The output should resemble the following image: 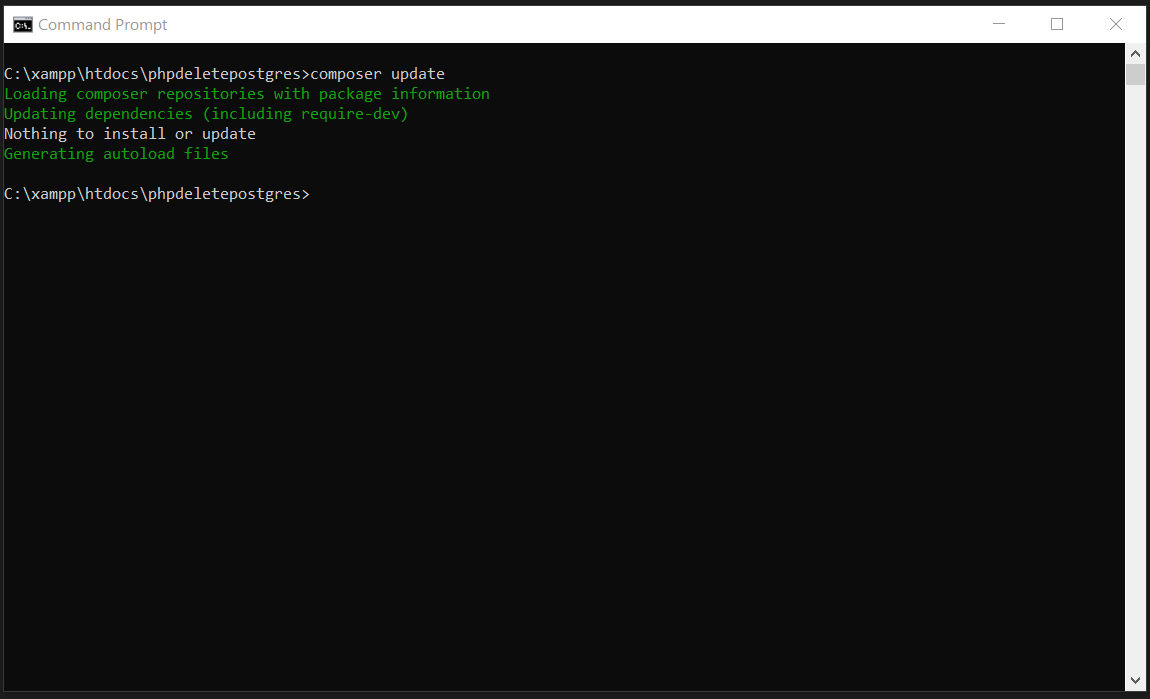 The project structure should now resemble the following: 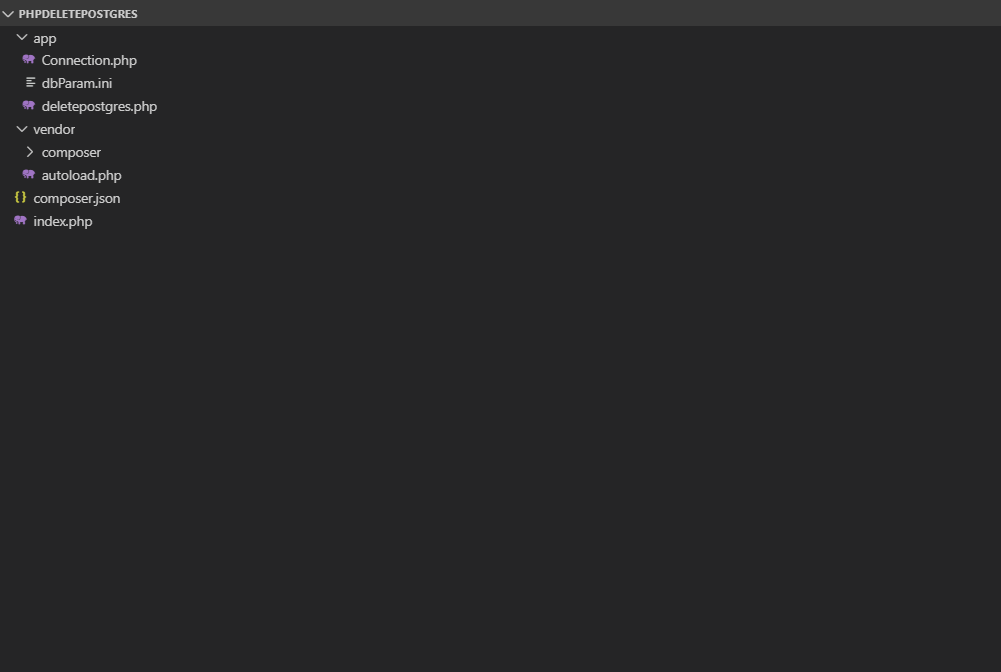 The following commands will create the sample database and the corresponding table:

The ‘car’ table should resemble the following:

This section will explain how to configure the PHP and Postgres database connection.

First, execute the following command to edit the dbParam.ini file to establish the connection parameters:

Now append the following PHP script in the Connection.php file:

Next, configure the phpdeletepostgres.php file for deleting specific data in a Postgres table as shown here:

Now execute the following script to configure the index.php file:

Here the index.php file deleted a car from the table that had an ID equal to “1”.

The output should now look like the following image: 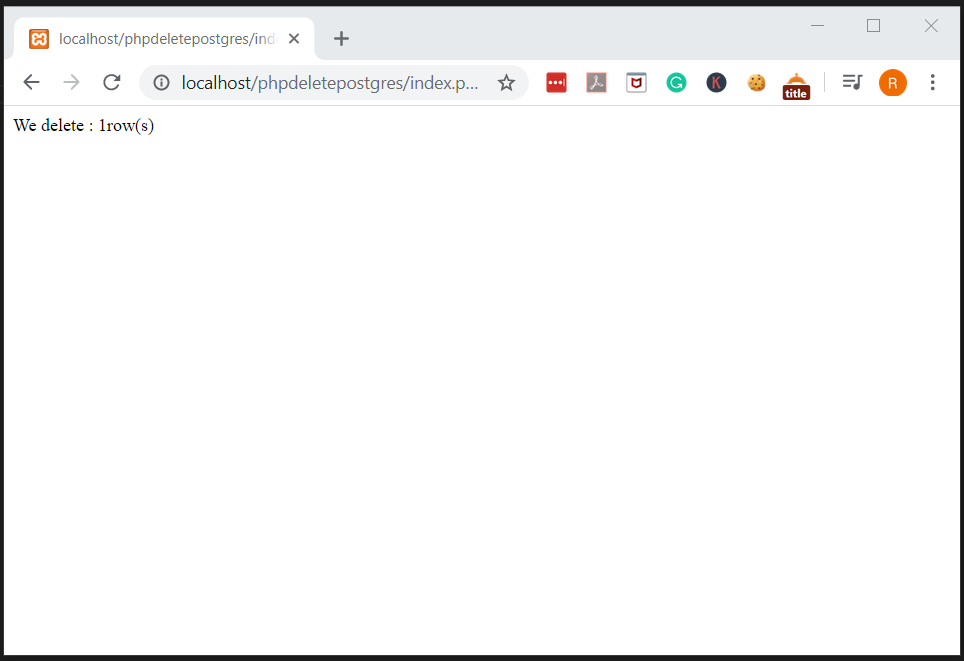 Now query the car table again to verify the results via the Postgres shell:

This tutorial explained how to delete Postgres in PHP via the PHP PDO API and provided working examples. The tutorial covered how to enable the Postgres PDO_PGSQL driver and execute the required steps to create the project structure file in Composer. The article then explained how to create the sample dataset used in the tutorial and then how to configure the PHP and Postgres database connection. Finally, the tutorial covered how to verify the result via the Postgres shell. Remember that only the first character, the semicolon, in the php.ini extension sections must be removed to enable the Postgres PDO_PGSQL driver.