The previous section of this series explained how to insert a record in the PostgreSQL database. Similar to what was covered in the previous part of this series, the main.go file must be update by creating new functions for the http.HandleFunc() method as follows:

Controller for Updating a Record in PostgreSQL using Go Lang

Here is breakdown of the above code:

With the controller properly set up, the user can make changes to a selected record.

NOTE: The index.gohtml code must be updated with the following command to trigger the handler created in the prevous sections: -td--a class="action" href="/patient/show?id={{.Patient_id}}-View-/a--/td-

This section will cover how to create the model or business logic against the controllers that were created earlier. The models.go file will be updated to reflect the functions, as needed.

Referring back to the first function, the (SinglePatient(r)) as required by the controller already exists in the application. The method for executing this function may be reviewed in part four of this tutorial series.

The code for creating the second function named PatientUpdateProcess(r), as required by the application controller, follows:

Note that the above code was almost identical to the code used in performing the INSERT operation. A breakdown of the code follows:

The front-end templates, as described in the previous parts of this tutorial series, will now be created.

The above code will display the details of the selected patient.

The above structure should resemble the following: 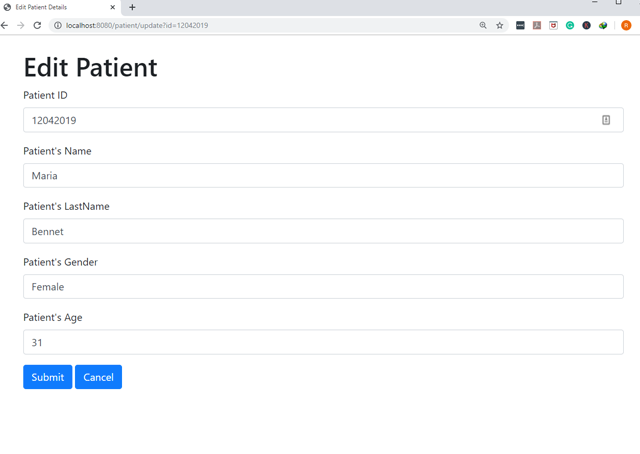 This was part six of a multipart tutorial series explaining how to create a Go Lang and PostgreSQL Web App with MVC pattern. Part six covered how to perform an UPDATE operation against a selected PostgreSQL record and display that newly updated record for review. This section specifically explained how to set up the controller to make changes to a selected record, how to configure the front-end templates to display the updated record for review and test the application. Part six also provided a step-by-step breakdown of the code used to execute these function. It is important to remember that the main.go file must always be update by creating new functions for the http.HandleFunc() method in order for the INSERT operation to function properly.

Below is the code of the files that we used in this application.