Introduction to the creation of PostgreSQL and docker container

If you’re developing an application that interacts with a PostgreSQL database, there’s a good chance you may want to use a Docker container. Packaging an application and its dependencies in a container is an effective way to ensure that your app will work smoothly in any environment. In this article, we’ll show you how to use PostgreSQL and Docker together, providing step-by-step instructions on the installation and setup process.

Although we’ll be running Postgres in a Docker container, we still need to have PostgreSQL and psql installed on our system.

Install Postgres and psql on Linux

Before you can use psql, you’ll need to install the postgresql-client-common library. The following command shows how to install it on a Linux distribution using the APT repository:

The following commands will install the PostgreSQL client:

Install Postgres and psql on macOS

If you’re running macOS, you can use Homebrew’s brew command to install Postgres and psql with the command shown below:

Use these commands to install and start the PostgreSQL service with Homebrew:

Make sure that you’ve also installed Docker because we’ll be using this to pull the Postgres image.

If you’re running Windows, login and download the installer here.

You can sign in and then download the DMG file for the interactive installer on macOS, or you can use Homebrew to install Docker.

Here’s how to use Homebrew’s brew command to install the Docker CE:

You can then use the command docker --version to display the version.

The following Homebrew command can be used to install the Docker Machine on macOS:

Before you can create a machine, you’ll need to install the virtual box. You can use this command to install it:

Now that we’ve covered the installation process on Windows and macOS, let’s talk about how to install Docker on an Ubuntu distribution of Linux. We’ll be using the APT-GET repository to handle the installation, so we’ll start the process by using the command sudo apt-get update. This command will update the repository packages before installing.

Next, we’ll need to add the GPG key to the Docker Packages.

For a Debian-based distribution such as Linux Mint or Ubuntu, use the following command:

Then add the .deb` file for the Docker repository:

Next, we’ll use the command cat /etc/apt/sources.list.d/additional-repositories.list to view the newly-added line in the repositories file. After that, we’ll need to run sudo apt-get update again to update the index of the package.

Finally, we’ll install both Docker CE and Docker Compose from the repository:

At this point, it would be a good idea to check if Docker has been installed and the daemon has been started. Let’s run the command shown below:

This command will display output stating that Docker is active: If you’re using the YUM repository on a Red Hat Linux distribution such as CentOS or Fedora, you’ll need to perform the following steps:

Then you’ll need to grab the stable repository:

Last but not least, you can install the Docker CE using the command shown below:

After you complete the installation, you can start it by typing this command:

To show all running containers, we can use the docker ps command. We use the docker -v command to get the version of Docker that’s installed on the machine. When you run these commands, you might encounter a permissions error that says something like the following:

If this occurs, use the following command to add your user, then log out and log in again:

Now try running docker ps again, and it should list the following:

We can use the docker pull command to have the Docker engine download the official Docker image for Postgres from the registry. The following command will pull the image to the local Docker directory– typically, this location will be /var/lib/docker:

Since we already installed everything we need for Docker, we can go ahead and create a Docker container that pulls the Postgres image: Let’s look at the command used to create a volume:

To inspect the volume we just created, we use the following command:

This command should return output that looks like this:

Next, we’ll start our instance of Postgres and use the 5432:5432 part of the command to bind the default 5432 PostgreSQL port to our localhost. The following example illustrates how this is done:

We’ll check that the container is running by using the docker ps or docker container ls commands. The returned results should look something like the following:

There’s a lot going on in the command shown above. Let’s take a closer look at how it works: 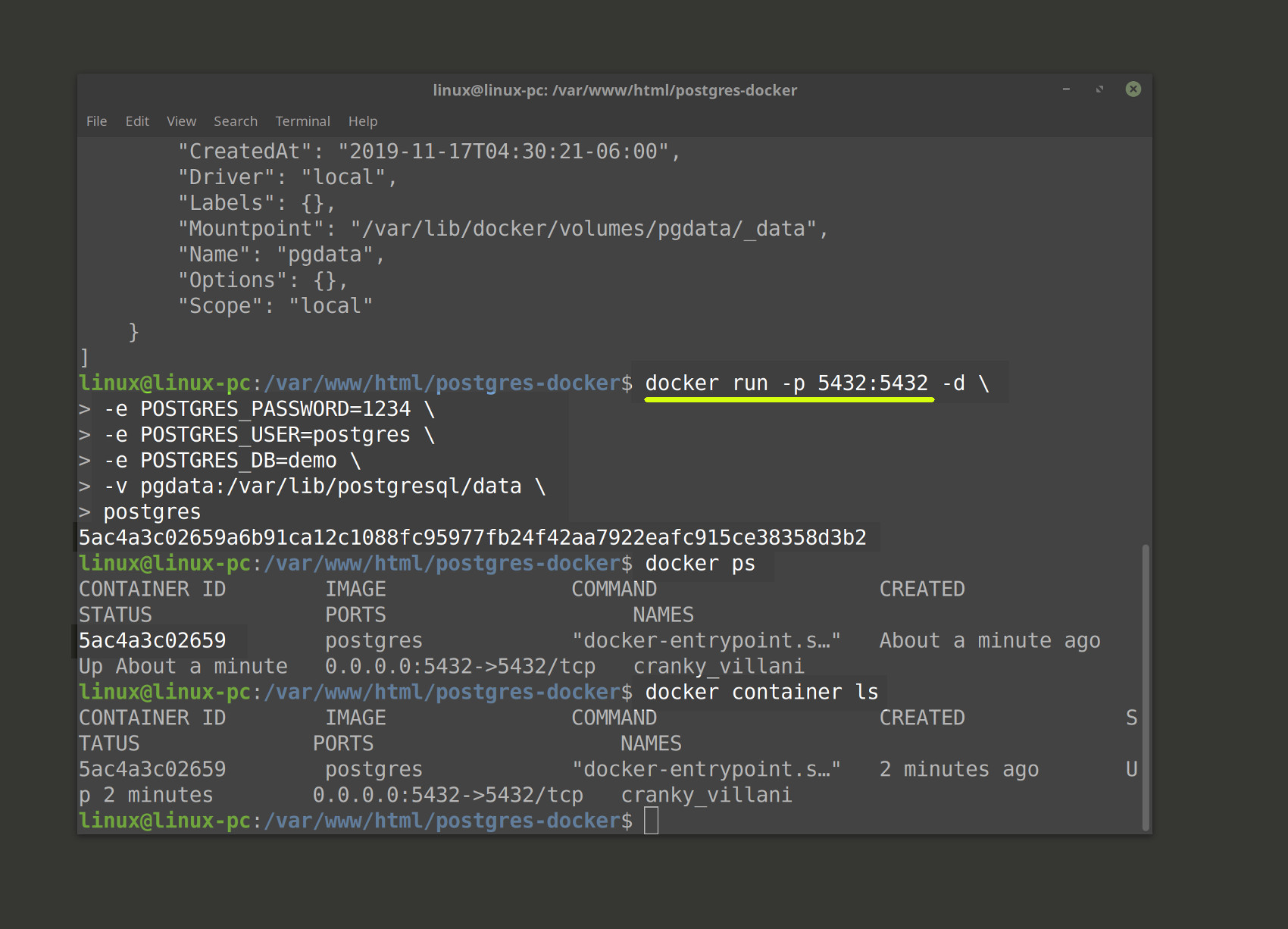 If you’d like to create a project folder with a bind-mounted volume for Postgres data at that project location, simply create a directory for the project and then change into it:

We’ll need to create a docker-compose.yml config file to modify our container so that we can bind-mount a local directory for our Postgres databases and tables. The following command will create the YAML file using the Sublime editor:

Set up the docker-compose file for the Postgres container

The following YAML script shows how you can set up the docker.compose.yml file for your project:

NOTE: Be sure to change the 54321 port and the pg-data bind-mounted directory to match your personal specifications.

Use docker-compose to start the container

After modifying your docker-compose file with the YAML data, save it and then run the following command inside of your project directory. This will have Docker create a container using the above specifications:

If we use the ls command (or dir in Windows) in another terminal tab, we’ll see that the pd-data folder was automatically created.

We can use the following commands to enter Postgres:

Connect and run some queries in the psql

If you already have PostgreSQL installed on your machine, you can use the command shown below to connect:

Otherwise, you can connect to the container using the Docker exec:

NOTE: Remember to replace b2e72fa0444f with your container ID. If you’re not sure of the ID, use the docker ps command to have the Docker engine return a list of all of your containers.

Conclusion to PostgreSQL and Docker

If you’re interested in developing an application that can be packaged to work seamlessly in nearly any environment, a Docker container may be the right tool for the job. In this tutorial, we explained how to use PostgreSQL in a Docker container, walking through each step involved in the installation and configuration process. With these instructions to guide you, you’ll be able to work with PostgreSQL and Docker in your own development efforts.