Written by Data Pilot
February 03, 2020
Subscribe
Like
Have a Database Problem? Speak with an Expert for Free
Get Started >>

This tutorial will explain how to configure a PostgreSQL server and troubleshoot the various issues that may arise during the configuration process. While it was developed for UNIX-based systems, like MacOS and Linux, PostgreSQL is highly portable so it will also run on other operating systems like Windows, Solaris, Tru64 Unix and FreeBSD. Because of the ways various operating system work, configuring a PostgreSQL server can create various issues on different systems. While there are sometimes problems when trying to configure a PostgreSQL server, there are fairly simple fixes for most of these issues.

Note that errors may occur while attempting to connect to the psql command-line interface or when starting the Postgres server. The most common causes for these errors will be covered in this tutorial.

First, confirm that PostgreSQL was successfully installed by calling up its version number with the following command:

If working properly, the system should return a response that resembles the following:

If something like a could not identify current directory or role not found error occurs, it is not an issue for concern as most these errors can be cleared up once PostgreSQL is properly configured.

If a postgres: command not found error occurs, it is typically the result of the Postgres PATH not being properly exported or that Postgres was installed using a non-standard repository.

Unlike MySQL, Postgres is pretty much designed to work as is, without much configuration. However, it is generally a good idea to make some modifications in both the pg_hba.conf and postgresql.conf files.

The locations of the .conf files will depend on the specific OS being used and the installed version of PostgreSQL.

Execute the following find command, in a UNIX terminal, to locate the postgresql.conf file:

The results should resemble the following list of files:

Alternatively, the files may also be located with this command:

Following is a third find method that involves using the -wholename option to search for Postgres by its complete file name:

The find command can also be used to obtain the location of the pg_hba.conf file, as follows:

If using MacOS, the file will probably be in one of the following locations:

If using Postgres on a Linux server, the file will mostly likely be in the /etc/postgresql directory. Try locating it by executing the following command:

Next, configure the default settings for PostgreSQL.

Use an IDE like Sublime or a terminal-based text editor, like gedit, vi, or nano, to modify the postgresql.conf file. The following bash command uses nano to edit the file for PostgreSQL v11:

NOTE: It is always wise to create a backup of the configuration files before modifying them, in case the system ever needs to be returned to the default settings. A backup can easily be created with the copy command by executing cp postgresql.conf postgresql.conf.bak command in the same directory where the file is located.

By default, PostgreSQL will only “listen” to the localhost (or 127.0.0.1 address), but can be modified to listen to all IP addresses by replacing localhost with an asterisk (*) as follows:

This command is especially useful for permitting remote connections to the PostgreSQL server over different domains. It is also helpful when wanting to run Postgres on a local network and allow all devices connected to the network to access the system. The following screenshot provides and example: 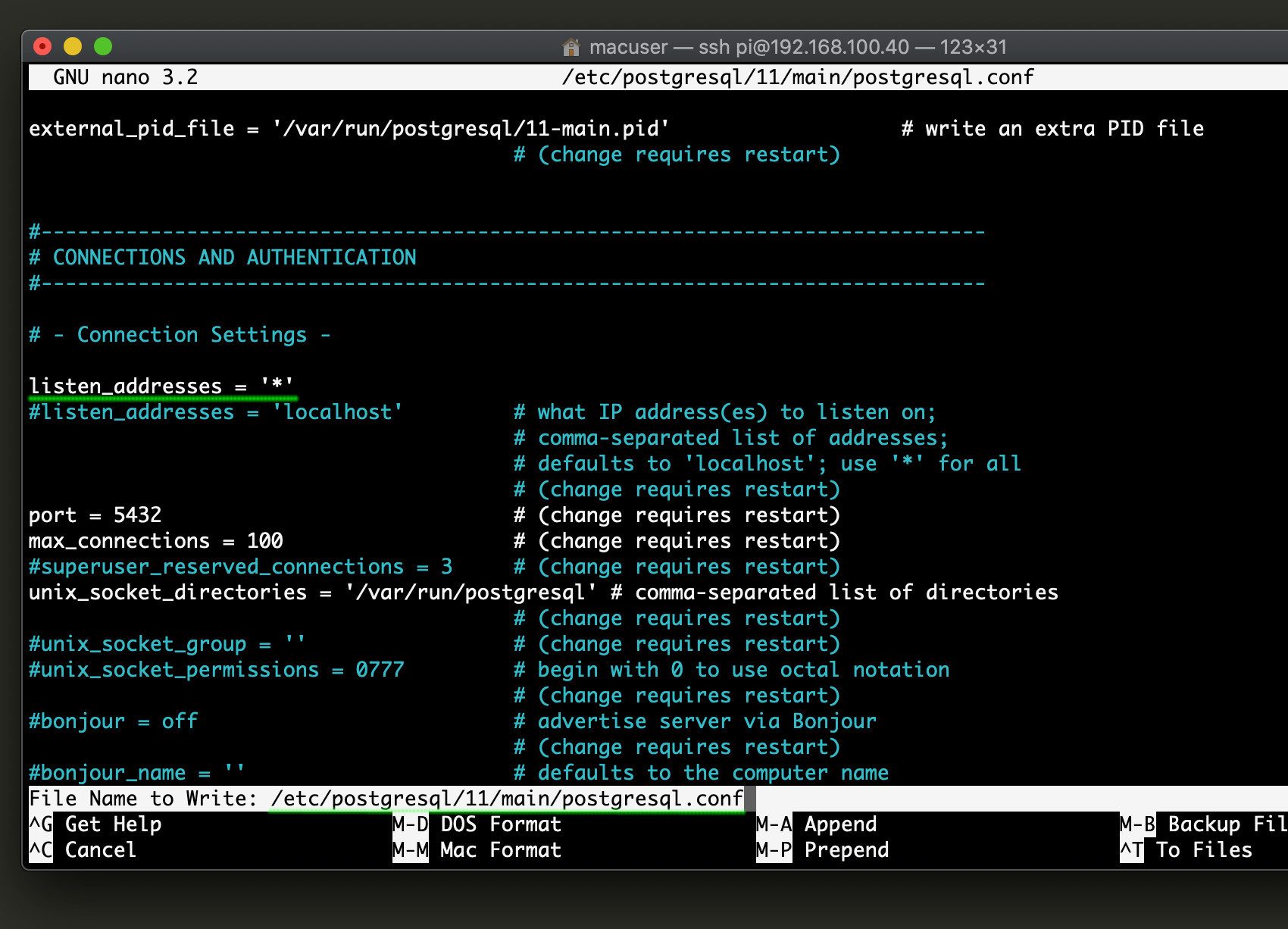 NOTE: Settings in a .conf file can be commented out by placing a hashtag (#) at the beginning of the line.

Other parameters, such as the default Postgres port of 5432, can also be modified in the postgresql.conf file. However, the PostgreSQL server must be restarted when finished for the changes take effect.

The pg_hba.conf, or host-based authentication, file is used to permit Postgres connections for users and roles. Execute the following command to modify this file with nano on an Ubuntu installation of PostgreSQL v11:

Depending on the PostgreSQL installation, the default settings should resemble the following:

Now scroll to the bottom of the file, just below the line that states # Database administrative login by Unix domain socket. As shown in the following image, the Postgres roles that are authorized for the server should be visible: 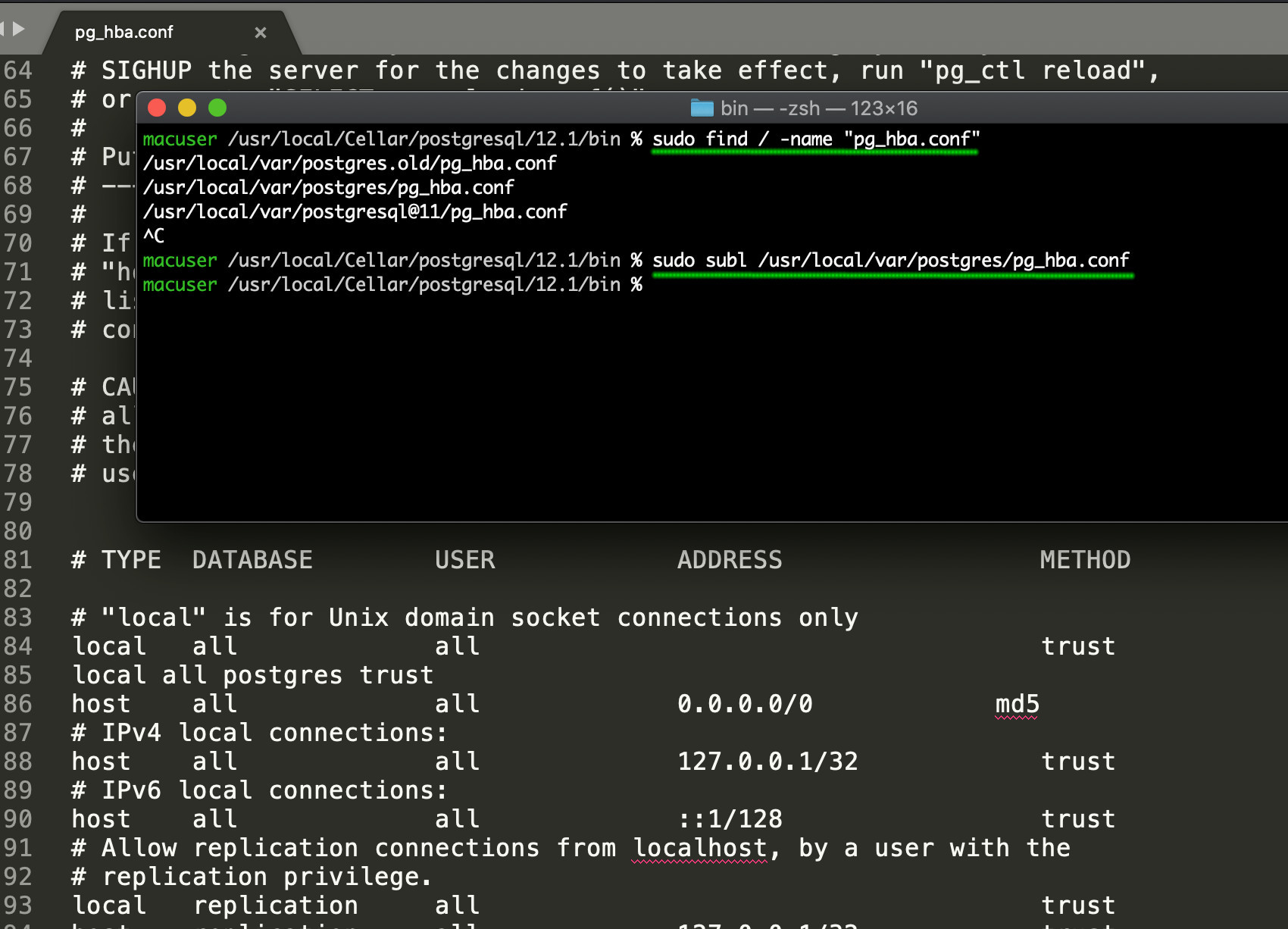 Now, to enable the postgres admin superuser role and instruct Postgres to “trust” the role to modify the database, append the following line to the file:

The peer setting enables Postgres to always trust the user, without the need for a password. Conversely, the following md5 settings will always prompt for a password and process it using md5 hash encryption:

NOTE: The 0.0.0.0 IP address acts as a “wildcard” for all IPv4 addresses. Be certain to replace this if Postgres is running on a server with a static IP address. If the host all permission is already set, and not commented out, then just change peer to md5 to enable password protection.

A FATAL: Peer authentication failed for user "postgres" error, means either permissions haven’t been given to the user in the pg_hba.conf file or the server hasn’t been restarted after making changes.

After the Postgres database has been initialized, start the server on a MacOS Homebrew installation with the following command:

Execute the following command to restart the server if running Postgres on an Ubuntu distro of Linux:

Executing the following enable command will ensure the server will start whenever Linux is rebooted:

Execute the following systemctl status command to obtain the status of the Postgres server:

Restart Postgres on a Mac

For a Homebrew installation of PostgreSQL on MacOS, execute the following command to start the service:

To run Postgres as a temporary background service, execute the following pg_ctl command:

NOTE: Since Homebrew puts its packages in the /usr/local directory by default, the above command will only work for a Homebrew installation of Postgres on a MacOS.

Execute the following command to obtain more information on the Homebrew Postgres server:

If the Postgres server is already running, and there is access to the psql command-line interface, execute the following SELECT SQL statement to reload the configuration settings:

This section will cover some of the more common issues that can arise when trying to connect to the psql CLI for Postgres.

An error may occur while executing a pg_ctl command that resembling the following:

Here it is not recommended to try to remove the postmaster.pid file with the rm command. Instead, attempt to “kill” the process by sending it a number 15 sigterm. Once the process has been terminated, the PID (process ID for the Postgres service) must be obtained by using the following lsof command to find all of the processes running on port 5432:

Once the PID has bee located, use the sudo kill command to safely shutdown the Postgres server by passing its PID number to the command as follows:

NOTE: The default sigterm is 15 when no numerical flag has been passed to the kill command. To immediately force the process to quit, without giving it time to shutdown, use the sudo kill -9 {PID} command. 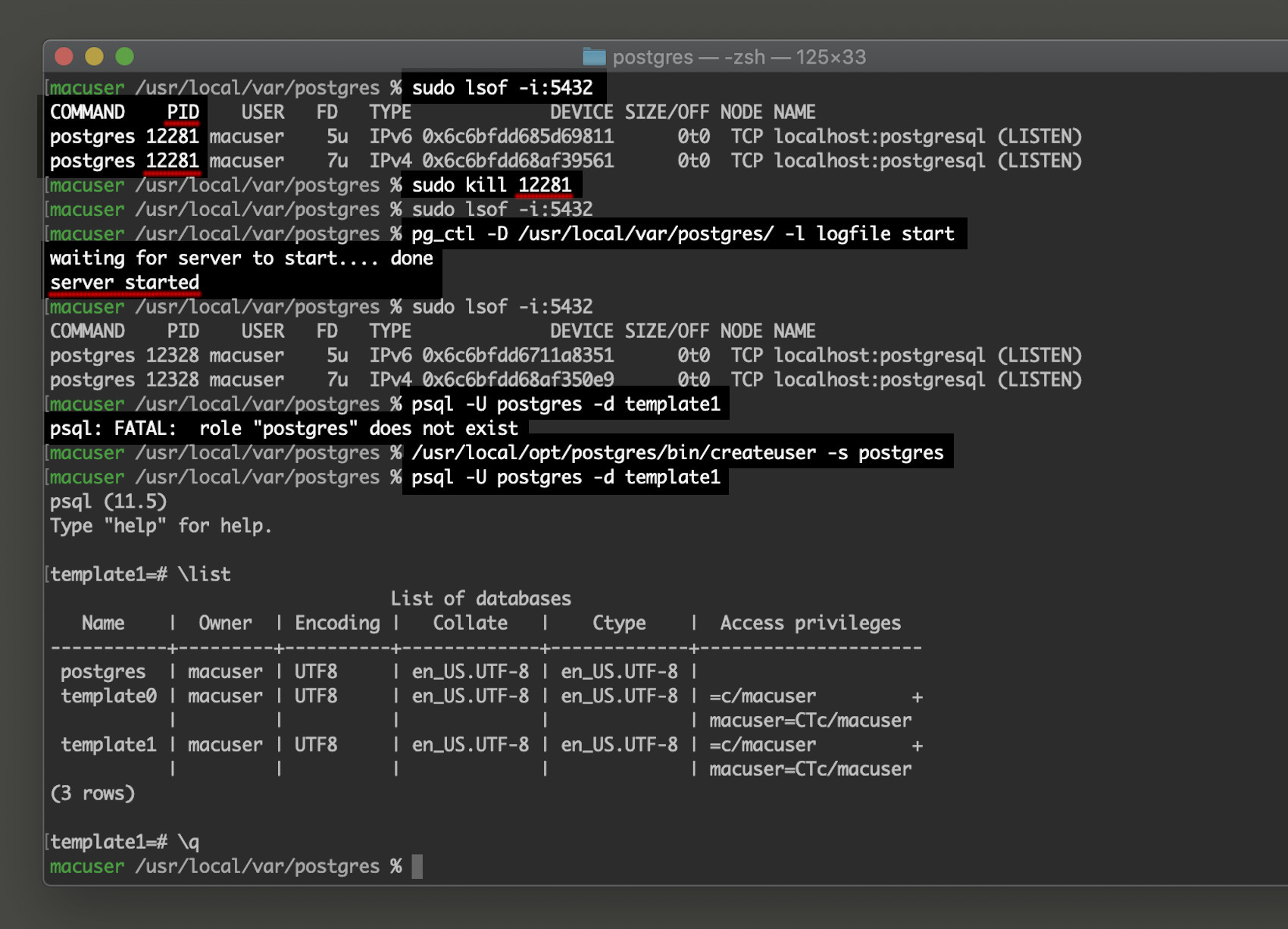 A command-not-found error for pg_ctl or postgres is usually an indication that the path for Postgres hasn’t been exported yet.

Following is an example of the basic syntax needed to export the bin path for a Postgres installation in a UNIX terminal:

Execute the above export command to append the bin path for the Postgres installation to the system’s PATH variable. Typing echo $PATH will verify the exportation was successfully.

Note that the full path for the Postgres installation should be located in /opt/PostgreSQL/, /usr/local/pgsql/bin, /usr/local/var/postgres, /var/lib/postgresql/ or /usr/local/Cellar/postgresql/12.1/bin for a Homebrew installation. The path may vary depending on the specific machine or the server’s OS, hardware architecture or on the installed version of PostgreSQL.

If a psql: command not found error occurs, try exporting the path in MacOS with the following command:

Note that the path for executable files in Linux is usually located in /usr/bin.

Export the path for PostgreSQL

The PATH line to the Bourne shell for the OS, such as the ~/.bash_profile, ~/.bashrc, or ~/.zprofile file, can be append to the Bourne file for a MacOS installation of Postgres as shown in the following example:

When finished, be certain to save the changes and have the new settings take effect by executing the following source command, followed by the file name, in a terminal prompt:

Use the -c option in a UNIX terminal to execute the following psql command to return the Postgres data directory:

The psql CLI can also be accessed directly using a superuser, like postgres, and then executing the following Postgres command:

In a UNIX-based OS, such as Linux or MacOS, the command should return /var/lib/postgresql/. It may include another subdirectory representing the Postgres version number, as shown here:

After the configuration process is complete, the final test is to see if a successfully connection to the psql CLI for Postgres can be established.

If a user hasn’t been created, execute the following command to pass an username to the createuser file:

The following command can be executed in Linux to create a user, provider the user has been given permissions in the pg_hba.conf file:

A database can then be created for the user with the following command:

Connect to psql from command line

If a password has already been set for the postgres user, access can be obtained with the following su command:

Connection to the postgres user may also be attempted by invoking sudo with the following command:

Connection to psql may also be obtained by specifying a username and database with the -U and -d flags as shown here:

If a user or a database has not been created, use the following postgres user and the default template1 database command to connect to psql:

Once inside of psql, set a password for the postgres user using the following psql command:

The following SQL commands will also create a user with a password and grant the user permissions to modify the new database:

Type \q to exit the psql interface when finished.

This tutorial explained how to configure a PostgreSQL server and troubleshoot various issues that sometimes occur during the configuration process. The tutorial explained how to set up and configure PostgreSQL, locate the postgresql.conf file, change the Postgres listen addresses and troubleshoot PostgreSQL address-configuration errors. The article then explained how to start and restart the Postgres server, add Postgres to ‘PATH’, export the path for PostgreSQL and show the Postgres data directory. Finally, how to connect to Postgres and a database and set the postgres user password were explained. Bear in mind that reviving a FATAL: Peer authentication failed for user "postgres" error means that permissions haven’t been given to the user in the pg_hba.conf file or that the server has not been restarted after changes were made.