Written by Data Pilot
November 12, 2019
Subscribe
Like
Have a Database Problem? Speak with an Expert for Free
Get Started >>

Google’s Tesseract OCR (Optical Character Recognition) software allows you to analyze the text in an image in order to process it and render it as a string of characters. This article will demonstrate how you can use Python’s pytesseract and pymongo modules to read an image and then insert its text data as a MongoDB document.

Check out the first part of this article series for instructions on setting up your project. This article assumes that you already have an image that you can use for extracting text data, and that you’ve already installed the necessary Python modules using PIP3. Please make sure the MongoDB service is installed and running before attempting to run the Python code. Fixing the ‘TesseractNotFoundError’ in Python

Installing the pytesseract library with the PIP package manager isn’t enough, and Python may return a TesseractNotFoundError while attempting to use the PyTesseract library methods. This typically means that Tesseract’s binary layer dependencies, or its language libraries, are not installed.

Use the following bash command to install the libraries on a Debian-based distro of Linux like Ubuntu or Linux Mint:

If you’re using a Red Hat distro of Linux (like Fedora or CentOS) then use the YUM package manager to install the Tesseract libraries:

Use the brew install command to install the necessary packages on macOS:

If you’re using Windows then download the correct Tesseract binary executable for your version of Windows, and set the environment path for pytesseract.pytesseract.tesseract_cmd. Import the Python modules for your Tesseract-MongoDB app

The following Python code will import the PyTesseract and MongoClient libraries, as well as a few other built-in system libraries like os, platform, and the Pillow library, or PIL (Python Imaging Library), so that Python can read the image’s data into memory:

We’ll use the datetime and time libraries to format timestamps and create a creation date field for the MongoDB document.

Use Pillow (PIL) to load the image file into memory

Now let’s declare a string object for the image’s filename, and then use Pillow’s Image.open() method to load the image’s pixel data into the script’s memory.

Use the following code to execute the code within a try-except indentation block to catch any errors that may arise:

NOTE: Make sure to pass the absolute path for the image file, along with the filename, if it’s not located in the same directory as the Python script. If Python cannot find the file, or otherwise raises an exception, then the above code will set our img object to None.

If no errors were returned then the example JPG image should be rendered by the Pillow library as a PIL.JpegImagePlugin.JpegImageFile object. Use the following code to evaluate the img object and connect to MongoDB with PyMongo’s MongoClient() method library if the PIL object is not set to None:

NOTE: MongoDB collection’s are allowed to have spaces, but database names are not.

Use PyTesseract to extract the image’s text

Now that we’ve connect to MongoDB we can pass img PIL object to the PyTesseract library’s image_to_string() method to make an API call to the Tesseract engine in order to have it return a string of text data from the image object.

Use the following code to get the text data within another try-except indentation block:

Use the following line of code if you’d like to replace the newline characters in the image’s text string with spaces:

Get the image’s file stats before inserting into MongoDB

The following code will use Python’s os.stat() method library to get more detailed information from the image file so that it can be inserted into the MongoDB document along with the text data:

Create a timestamp for the image’s MongoDB document

This next code will attempt to get the creation date for the file so that it can inserted as a field value for the MongoDB document:

NOTE: If the meta data for the image file’s creation date cannot be found then the above code will use the current time instead.

Create a Python dict for the MongoDB document

The code in this section will create a Python dict object for the document data that will be passed to PyMongo’s insert_one() method call.

Use this next bit of code to format the filename so that the absolute path is not included (if applicable) when the data gets included with the other document data:

Declare a Python dictionary for the image’s text data

The following code declares a dictionary ({}) that will store the image data as key-value pairs:

Insert the image’s text data into MongoDB as a document

The last part of our code will evaluate the img_doc to assert that its value is not set to None, and then it will pass the dict object to the MongoDB collection object’s insert_one() method:

NOTE: The inserted_id method attribute will instruct PyMongo to return only the document ID, otherwise PyMongo will return the complete pymongo.results.InsertOneResult object.

The document data being inserted should look something like the following JSON object:

Make sure to save the above code in a Python script (using the .py file extension), and then use the python3 bash command to execute the file:

The Python code should return something like the following (at the end of the script) if the MongoDB document insertion was successful: Use MongoDB Compass to verify that the image data was inserted

If you have it installed already, use the MongoDB Compass GUI application to verify that the image data was successfully inserted using Python. 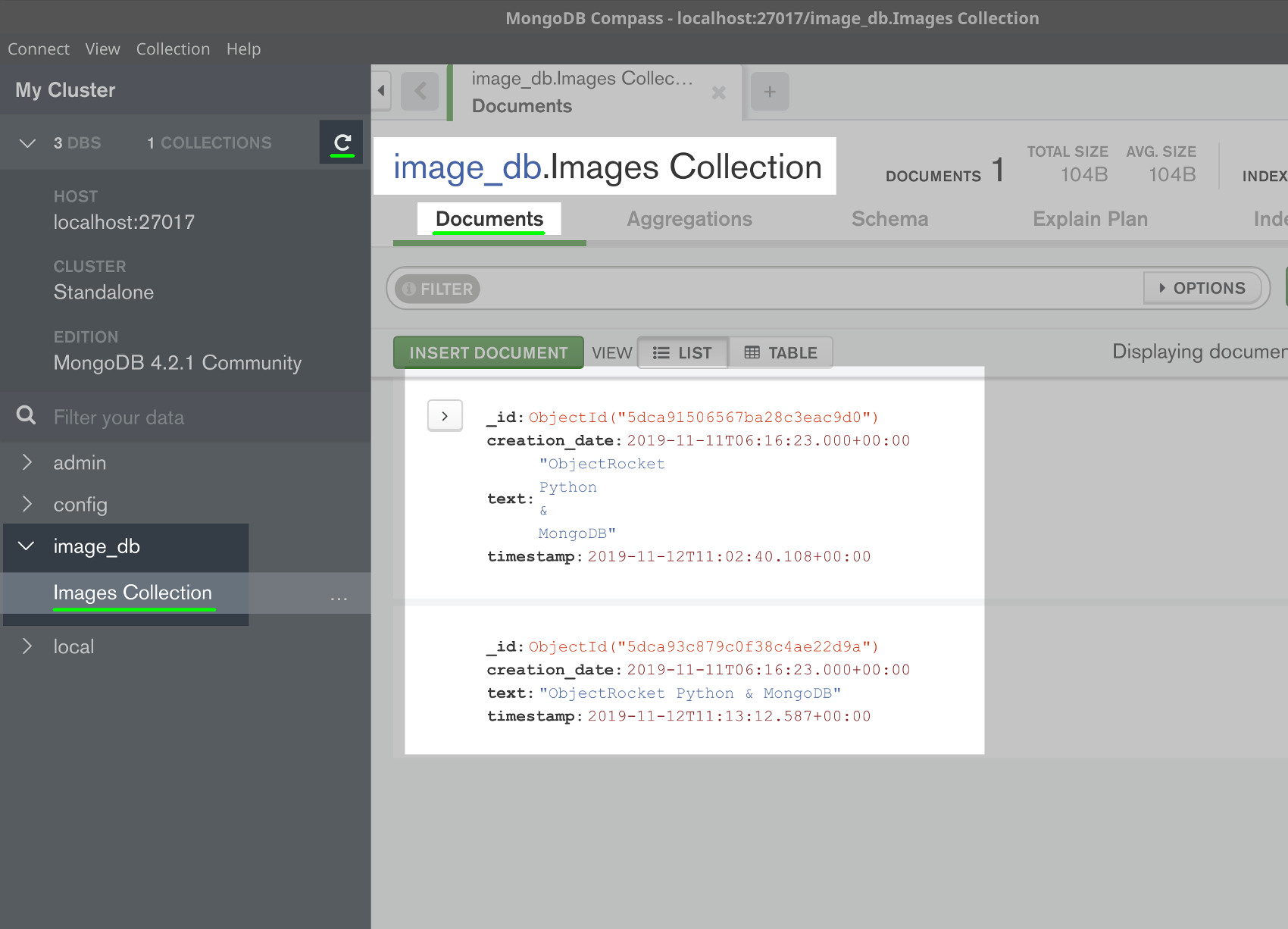 NOTE: The above screenshot shows how your document might look with and without the newline characters (\n) being replaced with spaces.

The document for the image’s text data should look something like the following in the MongoDB Compass application:

This concludes the two-part article series demonstrating how you can use Python, PyTesseract, and PyMongo to extract the text data from an image and insert it into a MongoDB collection as a document.