Use Python To Query MongoDB Documents In A Terminal Window

If you’re storing data in MongoDB, you may want to query for documents from a Python script. Fortunately, this is a simple task to accomplish. In this article, we’ll show you how to pass MongoDB query strings to a Python script from a terminal window. The script will then return a query response of MongoDB documents. Our example will look for the following documents that have the word “Object” in a field string: 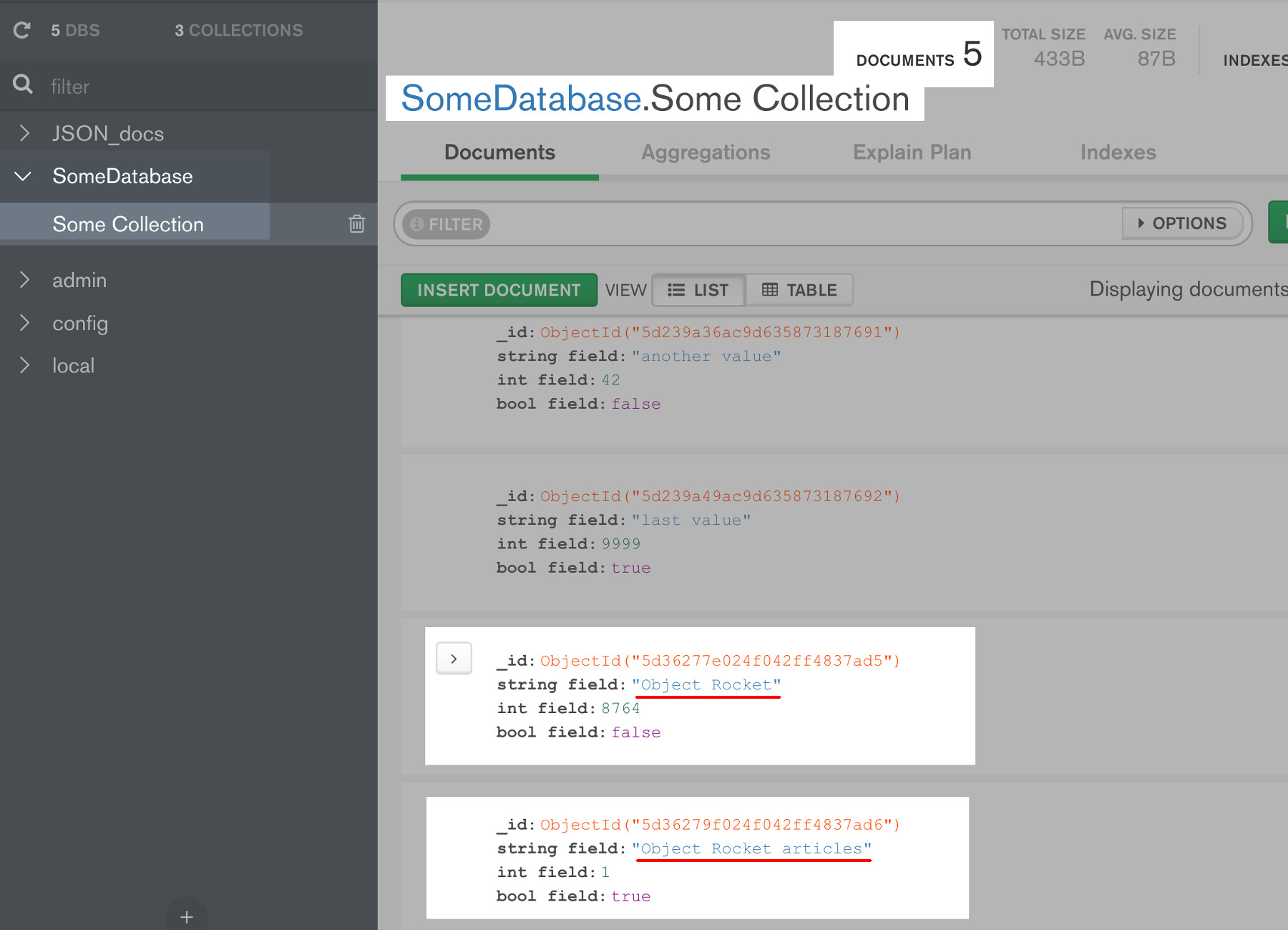 Let’s take a look at a few prerequisites that should be in place before we move on to the Python script: 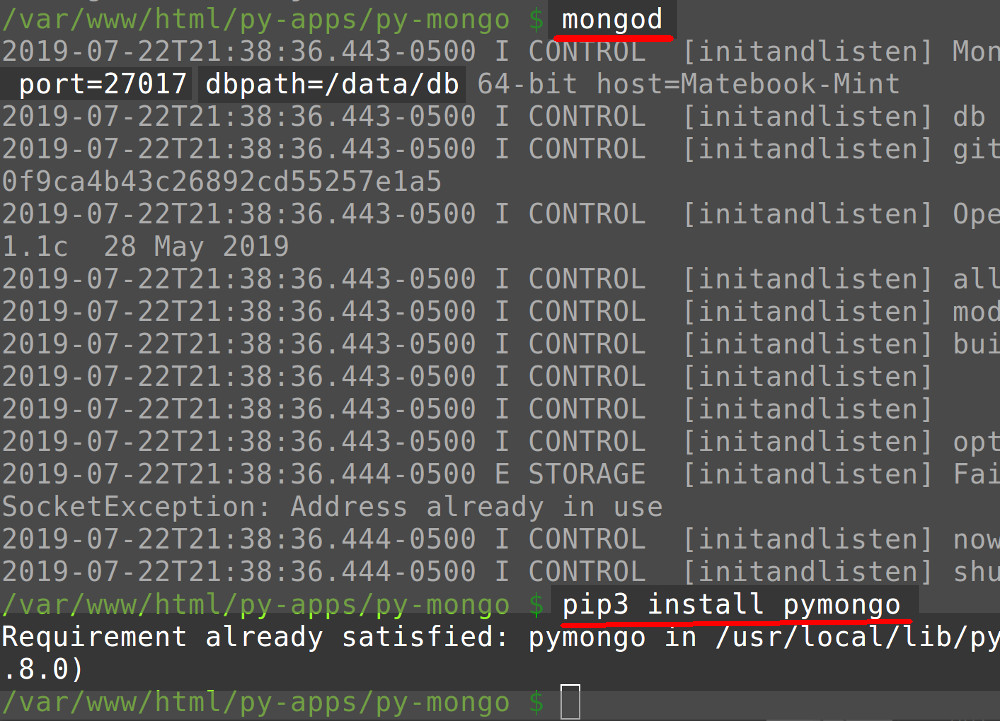 Create a Python script for the MongoDB queries and import PyMongo

At this point, we’re ready to move forward and dive into the code. We’ll first create a Python script using the touch command in a terminal window. In our script, we’ll import the sys Python package which handles the system arguments being passed to the script, and we’ll also import PyMongo’s MongoClient class for the API calls:

We’ll need to get the database and collection names from sys.argv— the list of arguments that gets passed to the script from the terminal window:

Now that we’ve imported the appropriate packages and processed the arguments, let’s declare a MongoDB client instance. After that, we’ll instantiate a collection object for the API calls using elements from the sys.argv list that was passed to the script:

Declare the main() function and check the arguments

A main() function needs to be declared in order to call the function from the terminal and to pass arguments to it. Make sure to check the length of the arguments list to ensure that the correct number were passed:

Get the field name and string query arguments

The first and second arguments will contain the database name and collection, so the third [2] and fourth [3] elements in the list can be used to hold the collection’s field name being queried and the string query itself:

The $regex pattern operator for MongoDB queries is very resource-intensive, especially when conducted on a collection with huge amounts of data. One way to deal with this is by creating an index to make the regex string query more efficient. Our next step will be to see if an index for the string field exists; if it doesn’t, we’ll create one.

We’ll use the collection instance’s index_information() method to get all of the indexes:

After that, we’ll iterate over all of the collection’s indexes. If the index for the field being queried doesn’t exist, then we’ll create it using PyMongo’s create_index() method:

Make the API request to query for the MongoDB documents

Now, let’s create a query and pass it to the find() method to return a PyMongo cursor object. If the cursor instance has a count() of zero which indicates that no documents were found, the following code will try the query again using lower, upper, and title case:

Instruct the Python interpreter to call the main() function

We’re almost done with our script, but there’s a bit of code we’ll need to include at the end. This code allows the Python interpreter to recognize the main() function as the script’s main module and to execute that function when the script gets called from a terminal window:

As you can see, it’s quite simple to write a script that can query for MongoDB documents with Python. Now that the Python script is complete, the only thing left to do is execute it. In a terminal window, navigate to the script’s location and use the python3 command to run the script. When you call the script, be sure to pass the appropriate arguments to it in order to avoid errors.

If any of your arguments have spaces in them, be sure to enclose them in quotation marks. Here’s an example where all of the arguments, except for the database name, have a space in them: 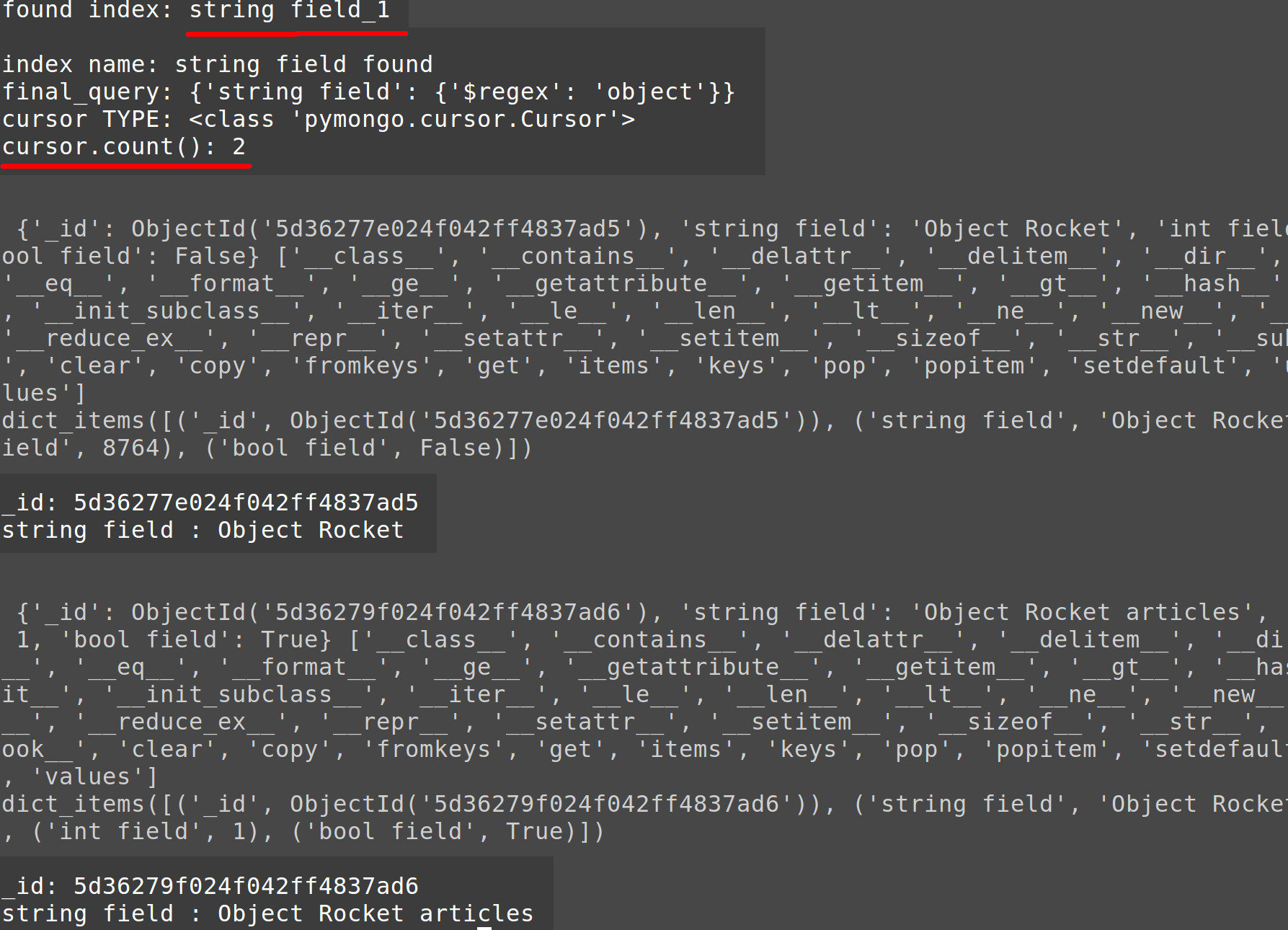 Although we’ve reviewed our example script one section at a time in this article, it can be helpful to view the code in its entirety. We’ve included the complete script below: