Use Docker and Python for a MongoDB Application

Written by Data Pilot
December 12, 2019
Subscribe
Like
Have a Database Problem? Speak with an Expert for Free
Get Started >>

Docker is an open source platform designed principally for Windows and Linux systems. A Docker image file is used to execute code in a Docker container created from the executable version of an application. The image becomes one, or multiple, instances of that container when a user runs an image. This tutorial will cover how to use Docker and Python for a MongoDB containerized web application, specifically how to create a simple Docker container able to run a MongoDB, Python and PyMongo driver web application.

Docker and Docker Compose must be installed on the machine or server with elevated admin privileges in order to use Docker and Python for a MongoDB containerized web application.

Both MacOS and Windows should have interactive installers from Docker’s downloads page. Confirm whether the OS has a 32-bit or 64-bit architecture and make sure to download the correct version for the corresponding system.

Use the APT-GET repository to install Docker on Debian Linux

The following commands will install the Docker engine on a Debian-based distro of Linux that uses the APT-GET repository:

Verify that Docker is installed

Use the docker version and docker-compose version commands to confirm Docker was correctly installed.

A Docker Compose YAML file must be created to handle the services running on the Docker container. To make this as simple as possible, the example will use just one container, called py-mongo. This container will use Dockerfile commands to install Python, the PIP package manager for Python modules and the PyMongo client library for MongoDB.

Depending on the version of the Docker engine being used, downgrading the version string to 2.x may be required. The most stable and currently recommended version is 3.x, however, some older versions of Docker may not be compatible.

Execute the following code to place the Docker Compose version at the top of the YAML file:

Create a container for Python and MongoDB

The services key is a top-level key used in the construction of the Docker containers. When executing this command, make certain to indent the name of the container one level below services, as shown here:

The build and context keys are required for the Dockerfile that will now be created.

Make sure to pass the relative path for the Dockerfile location. Alternatively, the . or ${PWD} (present working directory path name) commands can be used provided it is in the same directory as the following docker-compose file:

A volume can be mounted into multiple containers. For the volumes used in this tutorial, have Docker create and bind mount the mongo-app and mongo-data folders on the local machine for the respective Python app and MongoDB database directories as follows:

Open a port for MongoDB

The following key and indentation will bind mount and open MongoDB’s default port of 27017 to the host machine:

Execute the following commands to pass the username and password to the Docker Compose file’s environment key:

These files will be used later in the Python script when connecting to MongoDB. Make certain to save the file and then create another file called Dockerfile, without a file extension, and then edit the new file.

Put the following commands in the Dockerfile, making sure to save the file in the relative path specified in the above docker-compose file:

Note that the above Dockerfile commands should pull the latest MongoDB image and install Python and its PyMongo library for MongoDB.

Save the Dockerfile changes. Next, navigate to the terminal and execute the following command in the same directory where the docker-compose file is located:

Note that the above command will spin up the Docker container after it is created.

Typing ls in the project directory should now bring up the mongo-app/ folder for the Python application. Navigate into that directory and create a Python script for the PyMongo application.

Get the container’s IP address

Use docker ps to get the ID of the running container and then use the docker inspect {CONTAINER_ID} command to obtain the IP address the container is using. This is displayed in the folloing screenshot: 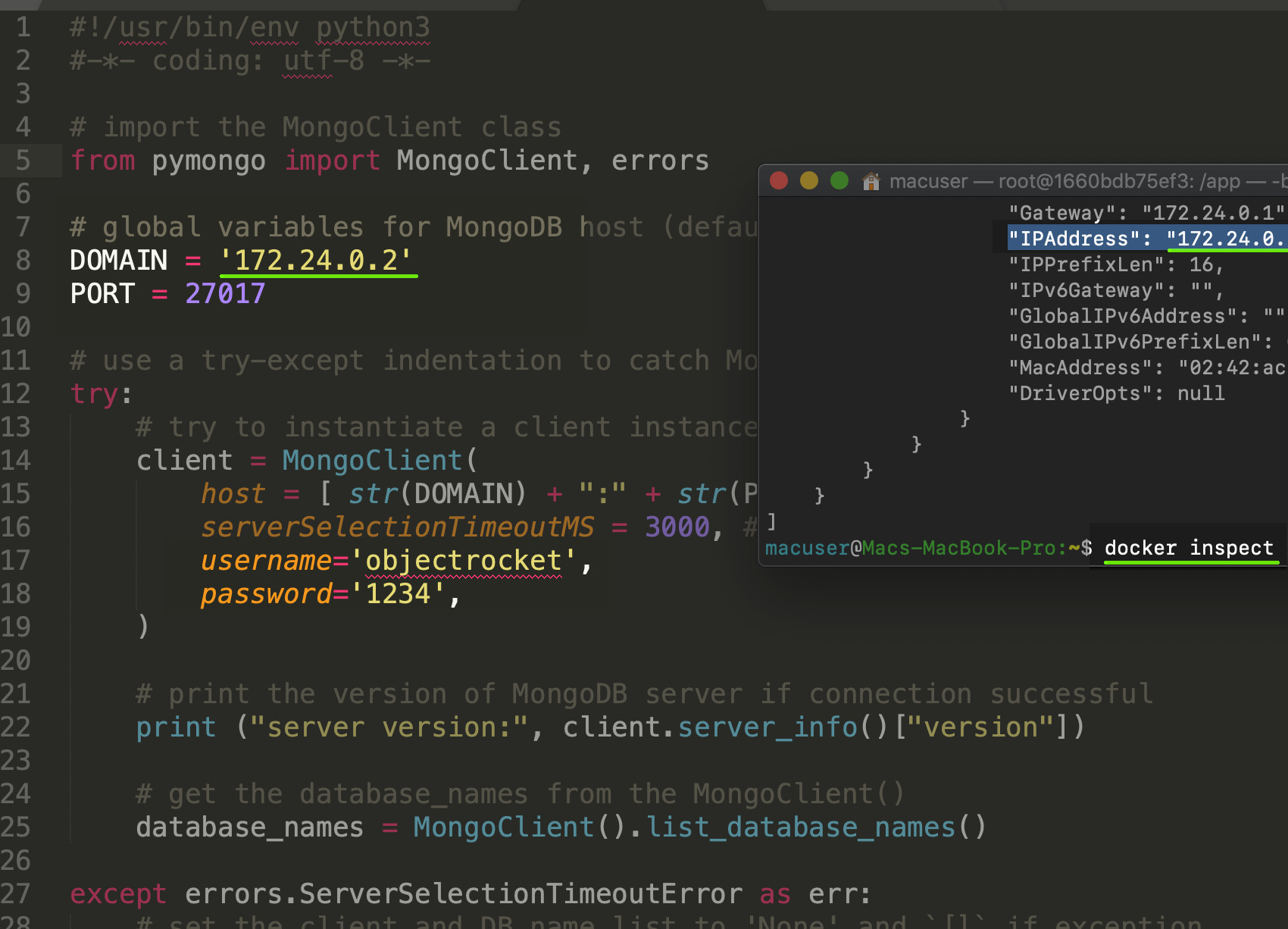 Connect Docker and Python to MongoDB

Put the following code into the Python file and make certain to change the IP address and MongoDB user credentials before running the script:

The above code should return all of the database names for the MongoDB server.

NOTE: Make absolutely certain to change the "objectrocket" username and password so it matches the container’s MONGO_INITDB_ROOT environment as specified in the docker-compose.yml file.

The following example shows how to interactively connect to a Docker container with an ID of 0950bf7d5036: 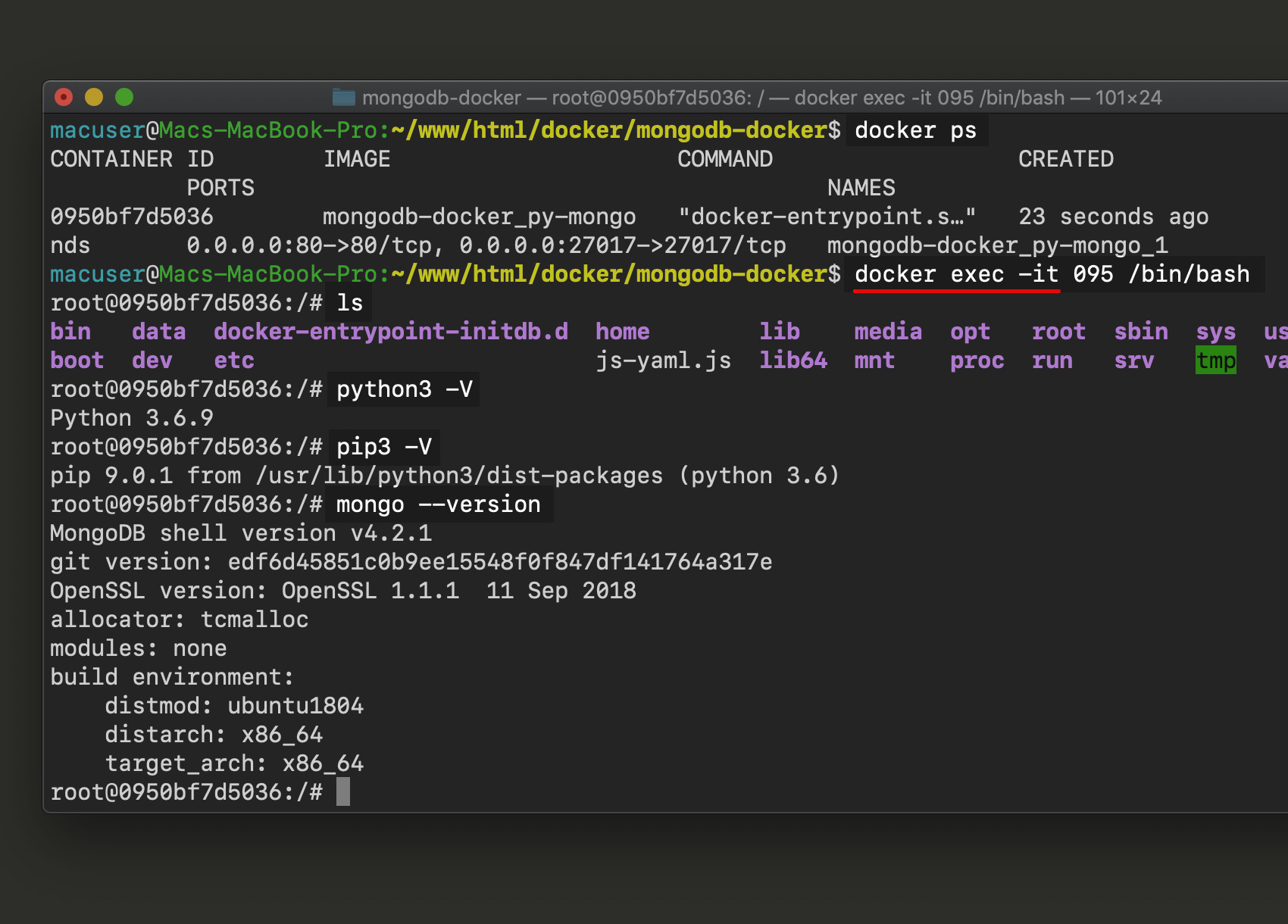 Execute the Python script inside of the Docker container

Use the python3 command followed by the script name to execute the script and have MongoDB return the names of the database. Since the 27017 port was opened on the host machine, the script should be able to be executed from outside of the container. This action just requires replacing the Docker container’s IP address with localhost for the MongoClient’s host parameter. This is shown in the following screenshot: Make sure to type exit to leave the container’s interactive terminal. Use the docker-compose down command in the project directory to have Docker Compose delete the container.

This tutorial explained how to use Docker and Python for a MongoDB containerized web application. The article specifically covered how to use Docker to create and pull MongoDB and Python images for use with the PyMongo driver using Python programming language. The tutorial also explained how to install Docker and verify the installation was successful, how to create a container for Python and MongoDB and mount volumes for the MongoDB database. The MongoDB environmental variables, the Docker container’s interactive shell and how to execute the Python script inside of the Docker container were also covered. Remember to use the docker-compose down command in the project directory to remover the container.