If you’re using Laravel for your web projects, you may want your apps to be able to interact with MongoDB. It’s easy to use Laravel to perform a variety of database operations with MongoDB, such as inserts, deletes and updates. In this article, we’ll show you how to update a MongoDB document using Laravel and provide code examples that you can use as a guide.

Before we dive into the code, let’s take a moment to review a few prerequisites that are essential for this project:

NOTE: We’ll be using a Windows environment for the examples shown in this article.

How to Configure MongoDB Database in Windows

Our first task will be to configure the MongoDB database. We’ll need to download the MongoDB DLL file, then we’ll extract the file in the PHP extension directory, which is found within the XAMPP directory (C:\xampp\php\ext).

After that, we’ll enable this extension in the php.ini file by appending the following text in the ‘extensions’ section: extension=php_mongodb.dll.

In this section, we’ll show you how to create a Laravel project. First, let’s navigate to our project directory and execute the command shown below:

This command will create the updatemongo directory within ‘htdocs’.

To verify that our Laravel project was successfully created, we can use the following URL in the browser: http://localhost/updatemongo/public/. 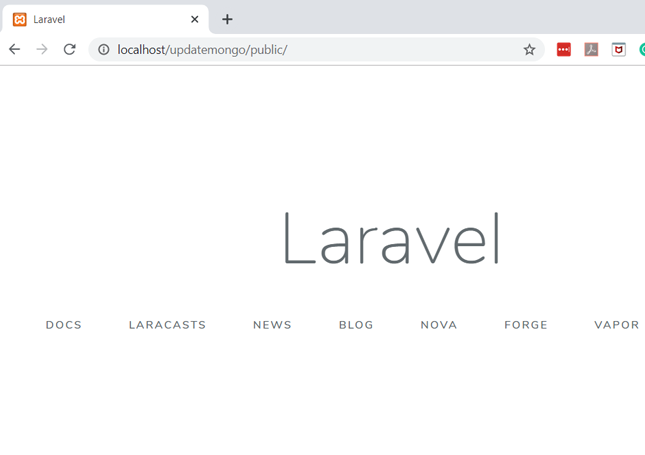 You may have noticed that we’re using a fairly lengthy URL for our app. We can customize this URL to be shorter, like this: updatemongo.net.

To do this, we’ll be modifying two files:

After making your modifications, save the file and restart Apache using the Control Panel. 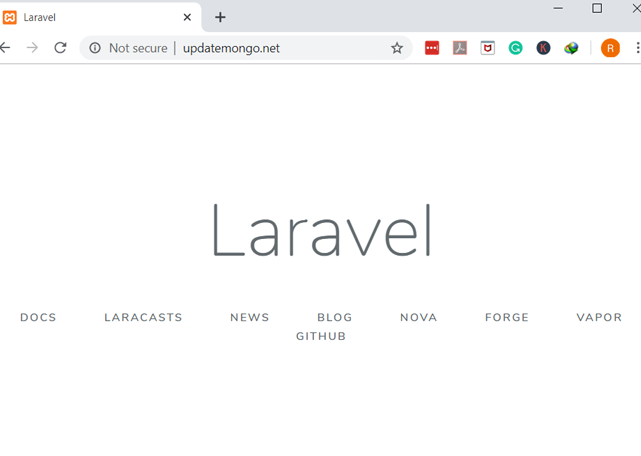 This confirms that our application is using the customized URL.

Next, let’s discuss how to configure a MongoDB database to work properly with Laravel. We’ll need to update the .env file with the details shown below:

Our next task will be to install the MongoDB package in our Laravel project. To accomplish this, we’ll use the following command:

We’ll also need to register MongodbServiceProvider as our service provider, so we’ll add the PHP script shown below in our app.php file:

In this section, we’ll be creating the model of our basic application using the following command.

Creating a MongoDB database and Collection

Next, let’s create a sample MongoDb database that we can use in our code examples:

We can verify whether our database operation was successful:

Creating the Controller and Route

Next, we’ll look at how to create the controller and the route for updating a MongoDb document using Laravel.

Let’s navigate to our project directory via command line; then, we’ll use the following command:

The code shown above will create a new PHP file named ‘StudentController’. Let’s open that file and append the following code to it:

The first part of the code will fetch all available MongoDb documents. The second part will update the MongoDB document using the id as the reference.

The lines of code shown below are routes that will handle the user requests for both fetching all the documents for the homepage and updating a MongoDB document:

We’re now ready to create the view that will be used for our update operation. We will be using a modal form to update a selected MongoDB document.

In order to display the MongoDB document, we’ll need a layout. Here’s how we’ll create our layout file:

To do this we need create a new file under the views directory and name it home.blade.php.

At this point, we can test our application using the following URL in our browser: http://updatehmongo.net/home. 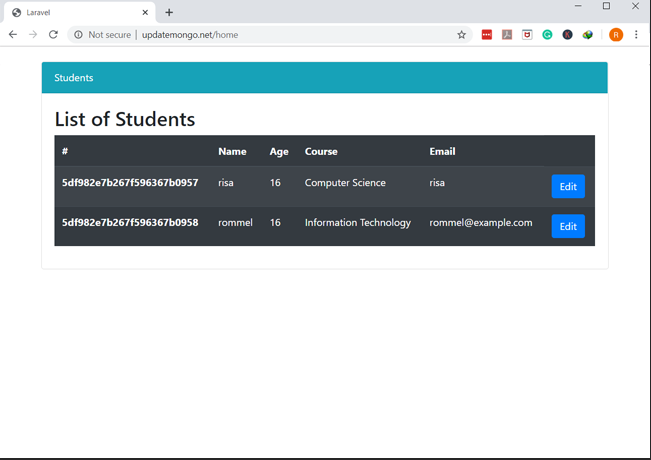 The application is working properly, and we can now perform our update operation.

When you’re using Laravel to build web apps, you’ll probably want your code to interact with a MongoDB database. In this article, we showed you how to update a MongoDB document using Laravel. With the instructions and code examples provided in this tutorial, you’ll be prepared to add MongoDB update operations to your own Laravel apps.