Written by Data Pilot
December 15, 2019
Subscribe
Like
Have a Database Problem? Speak with an Expert for Free
Get Started >>

In this article, we will create a simple mongoose and Node Js example with step by step instructions. Please review the prerequisites below.

First of all, we need a package.json file to start with. Create a new folder and name it anything you like. I will name it “newApp”. Open a terminal and go to this folder. Then, run the following command. (You can omit -y for providing details in the package.json file)

This will create a package.json file. Now, we need the express. Express is a web framework for NodeJs. We will use the express to create a server and API. Run the following command to install express.

Now we can create a server. In the same folder, create a new file and name it “server.js” and paste the following code in it.

In the above code, we imported express and used it to create a server. Let’s run it using nodemon.

We have a server now. Now, we can connect MongoDB with it. We will create to APIs – One will insert the data and the other will retrieve it. But first, we need a connection with MongoDB. To establish a connection, install the mongoose ODM.

Now we can use mongoose to establish a connection with MongoDB. Insert the following code into the server.js file.

In the above code, we imported mongoose and then create a URI. Observe the URI.

“details” is the name of the database that we are connecting to. Then we used the connect() method for the connection. Let’s run it and see if the connection is successful or not.

Yes! The connection is successful.

The next step is to create a schema. The documents in the database will be inserted according to the schema we will define. In the same folder, create a new file and name it “model.js”. Paste the following code in it.

We can create APIs now. We need a router to create route handlers. Add the following code in the server.js file.

Any link, starting with ‘/’ will be captured by the router we created. This is how server.js file looks like now.

Until now, we used Nodejs and express to create a server. Then we established a connection with MongoDB using mongoose. Using mongoose again we created a schema for our collection and at last, we defined a router. Now we can create the APIs.

The first API will insert data into the Employees collection. So the router handler will make a post request.

The above route handler will be invoked when the endpoint ‘/insertdata’ will be executed.

To invoke the insertMany() method, we will use the model we created and imported in the server.js file.

We passed the array to the insertMany() method. Place the above in the route handler we created earlier.

Now, we will use the postman tool to test this endpoint.

The insertMany() method returns the documents that were inserted successfully in the collection.

Similarly, we can create another route handler to fetch the documents. The difference here will be – Instead of the POST method, we will make the GET method and instead of insertMany() method, we will use the find() method. 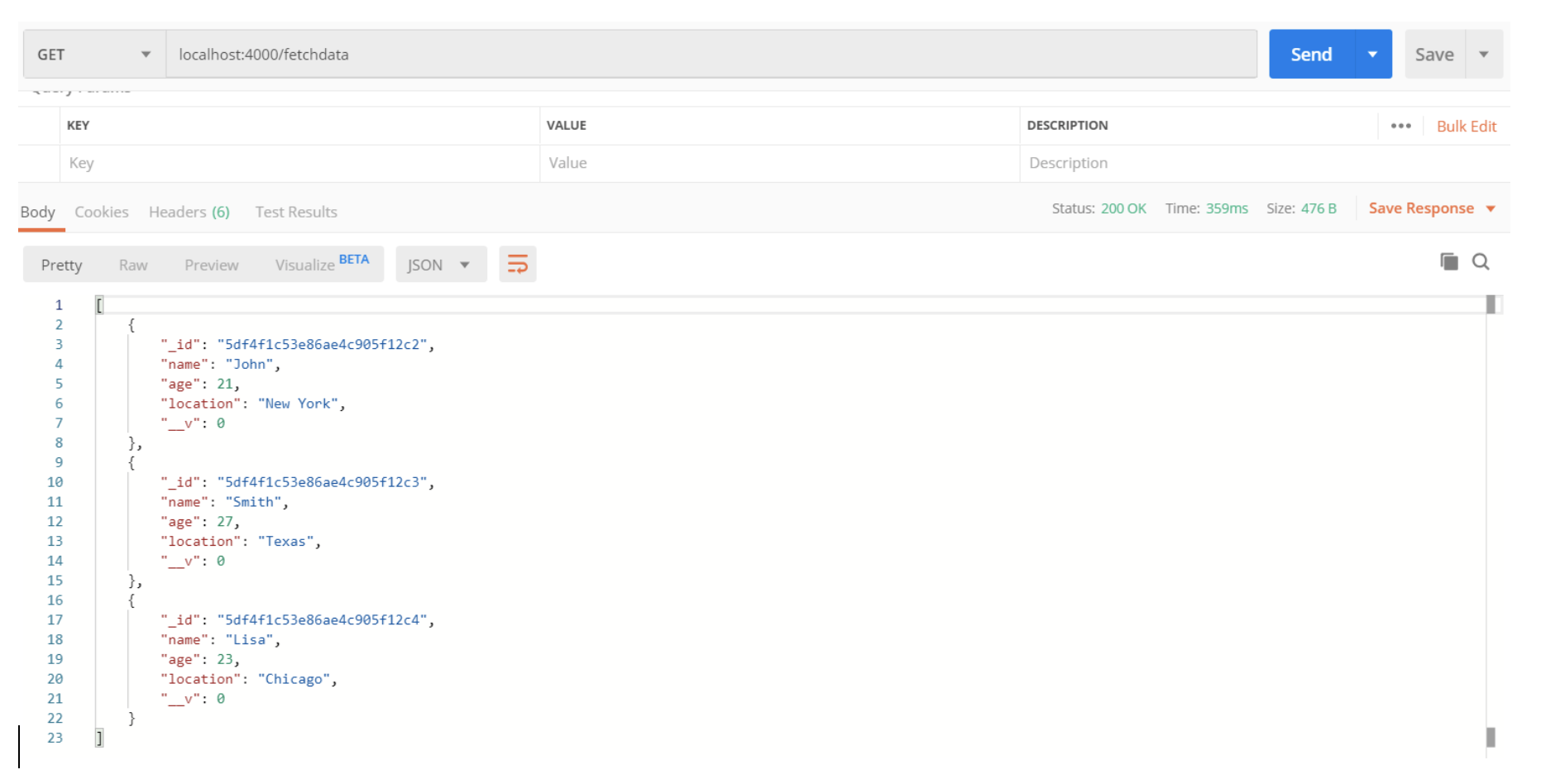 Yes! It returns all the documents.

So this was a simple mongoose and nodejs example. In this application, we created a server using express and nodejs. Then, we used mongoose to establish a connection with MongoDB. We also used mongoose to create the schema. You would have noticed that express is a very useful framework. The router is created using express only. Then, we created two APIs for inserting and fetching data from the collection.