Written by Data Pilot
October 14, 2019
Subscribe
Like
Have a Database Problem? Speak with an Expert for Free
Get Started >>

We will use the postman tool for executing routes. You can download this tool from https://www.getpostman.com/.

Let’s go with the most basic method for iteration – the for loop. In the for loop, we initialize a variable, give a condition and increment/decrement the variable.

Let’s insert an object three times using the for loop. Right now, the details collection does not contain any documents.

Let’s execute this route using the postman tool and see what is the output.

It returns the object we passed to the create method. How many documents do you think are added in the details collection? Let’s see through the mongo shell.

As expected, three documents with the same values are inserted. This is how we can add documents using a for loop. But you can also see, an extra field (__v) is added while using this method.

But lets the console for a moment. 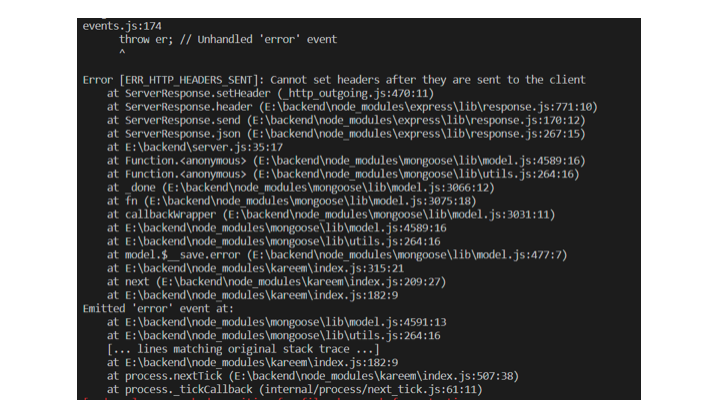 This happens because we are sending a response multiple times (because of the for loop). This is not allowed. We can remove the “res.json(result)” line and everything will work fine.

But it is not recommended to use queries inside a loop because of the asynchronous behavior of Nodejs. So it is better to avoid using queries in loops. It can result in unwanted errors.

Using loops and queries together is a bad idea. For most of the part, Nodejs is asynchronous and loops do not work well with asynchronous behavior. So avoid loops if there are queries involved.